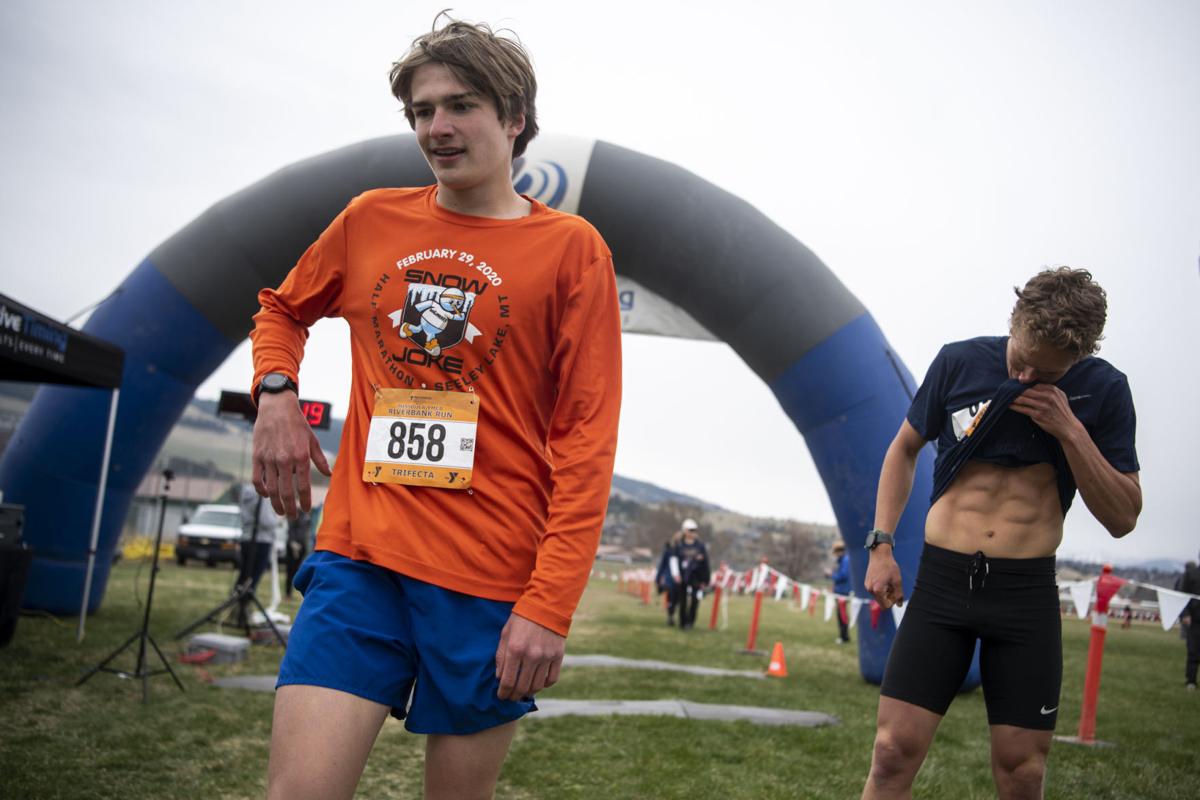 Chase Green, left, and Cody Moore placed third and first, respectively, in the one mile Trifecta race during the YMCA Riverbank Run Saturday at Playfair Park in Missoula. 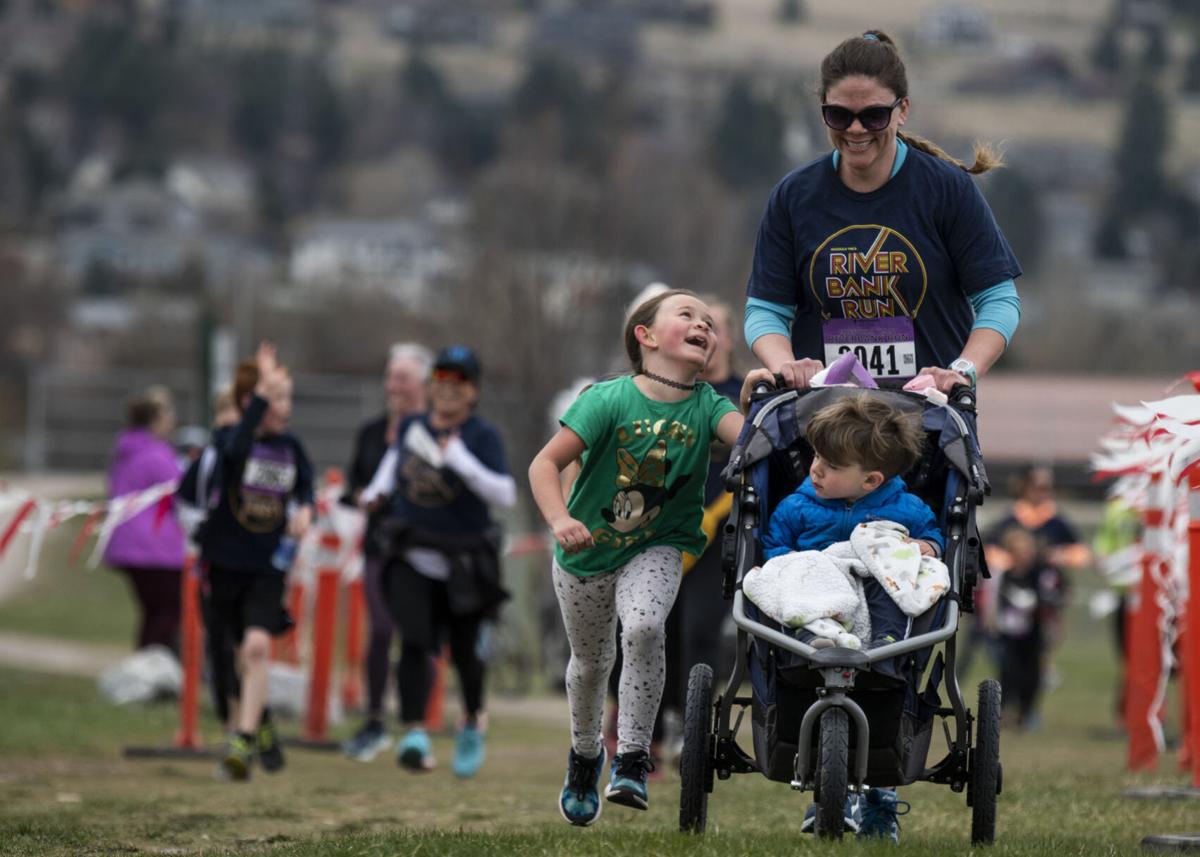 Megan Lodders runs with her family during the YMCA Riverbank Run Saturday. 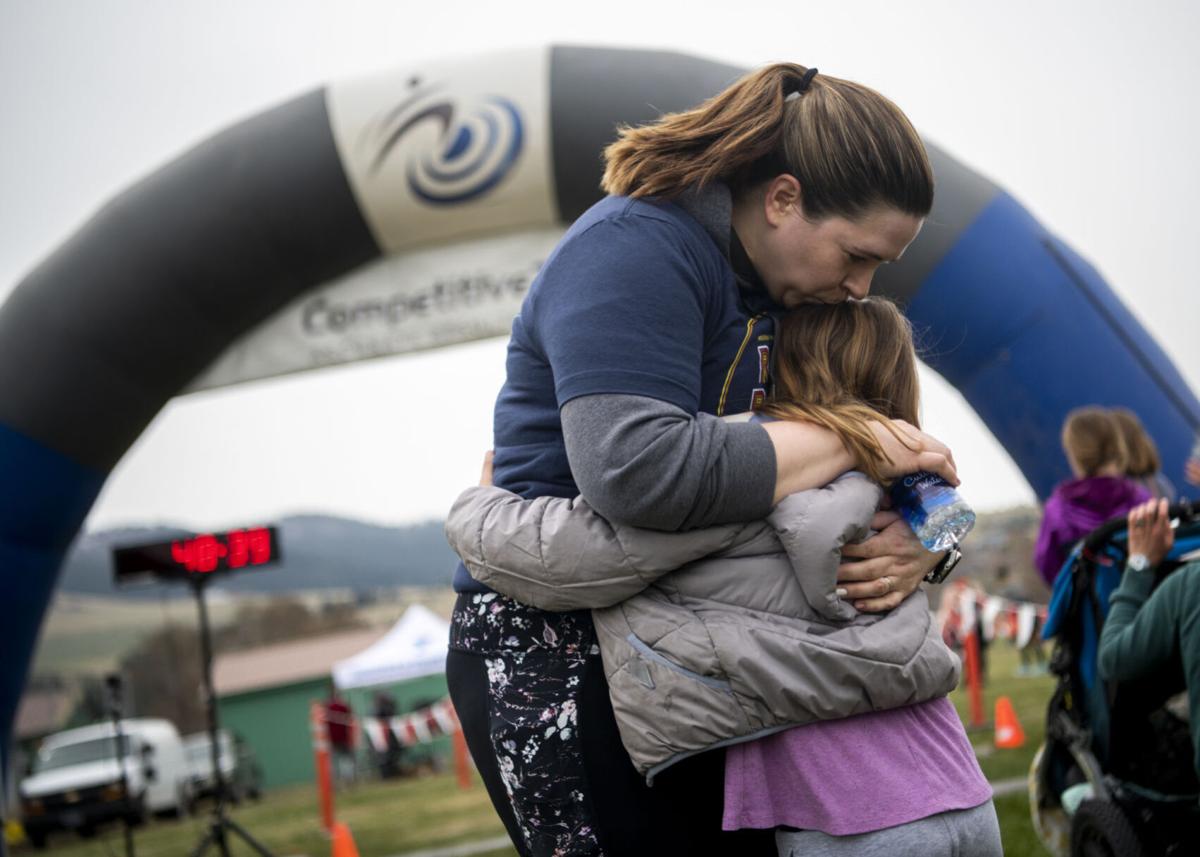 The rain stayed away, the wind never became more than a slight breeze, the temperature stayed in the mid to low 40s and runners got their chance at a rare live race in the 49th annual Missoula YMCA Riverbank Run.

Just about the best one could ask for as live racing made its return to Missoula.

The Riverbank Run brought in over 1,500 participants — counting both the in-person and virtual only racers — through the multiple divisions after it took a year off from the live event due to the COVID-19 pandemic. The numbers weren’t quite at the level of the last time the race was in person in 2019, when over 2,000 runners competed, but considering the slow transition back, 1,500 was a solid turnout.

This year’s edition of the Missoula tradition is one of the first organized, in-person local races in some time as the 2021 Missoula Marathon opted to go virtual just over a month ago.

With the full return of the Riverbank Run Saturday, runners were pretty happy for some live, local racing and a chance to ring in the spring like in the past.

“I couldn’t have asked for better weather,” Cody Moore, who dominated with wins in the 10K, 5K and the mile, said. “I was expecting it to be a little soggy so overcast and 45 is hard to complain about. … It was just fantastic to pin a bib on and get to line up against some folks and see where my fitness is at.”

The weather keeping calm and nice definitely helped too as runners throughout the morning raved about the conditions and how they were worried heading in based off the forecast for the day.

Rain was in the forecast with a slight chance throughout the morning and into Saturday afternoon — and it never fell. Conditions stayed brisk and calm for runners all morning at Playfair Park, allowing racers a perfect day in a rare in-person race.

As for the actual competition, a few runners made some impressive marks.

It was hard to miss Moore. Whether because of his bright pink shoe-sock combo, or that he blazed past the field with the fast times across all of his races, Moore was the standout on the men’s side.

Those pauses were an interesting mechanic for Moore, who said he had to adjust a little at the start of the 5K and mile as his body got back moving after lengthy breaks.

Wasserman, who lived in Missoula and was part of the running community in town, hadn’t raced in over a year, dating back to the 2020 Olympic Trial in Atlanta, Georgia, in February 2020 when she took 278th out of 390 women in the marathon with a mark of 2:52:36.

She was easily one of the many who were happy to get back into a locally organized race,

“It’s kinda fun to be in a local race and one that Missoulians and Montanans really feel proud of,” Wasserman said.

As for the future of the event, race organizer Keri McHugh said she hopes to keep the virtual component to the event while offering the full in-person next year for the 50th edition of the Riverbank Run.

“We are so excited and are overwhelmed about the amount of people that have showed up in person,” McHugh said. “It’s been awesome. We are so happy to have it back and back in the spring.”

Lance Hartzler covers Montana men's basketball and prep sports for the Missoulian. Follow him on Twitter at @lance_hartz or shoot him an email at Lance.Hartzler@406mtsports.com.

Chase Green, left, and Cody Moore placed third and first, respectively, in the one mile Trifecta race during the YMCA Riverbank Run Saturday at Playfair Park in Missoula.

Megan Lodders runs with her family during the YMCA Riverbank Run Saturday.