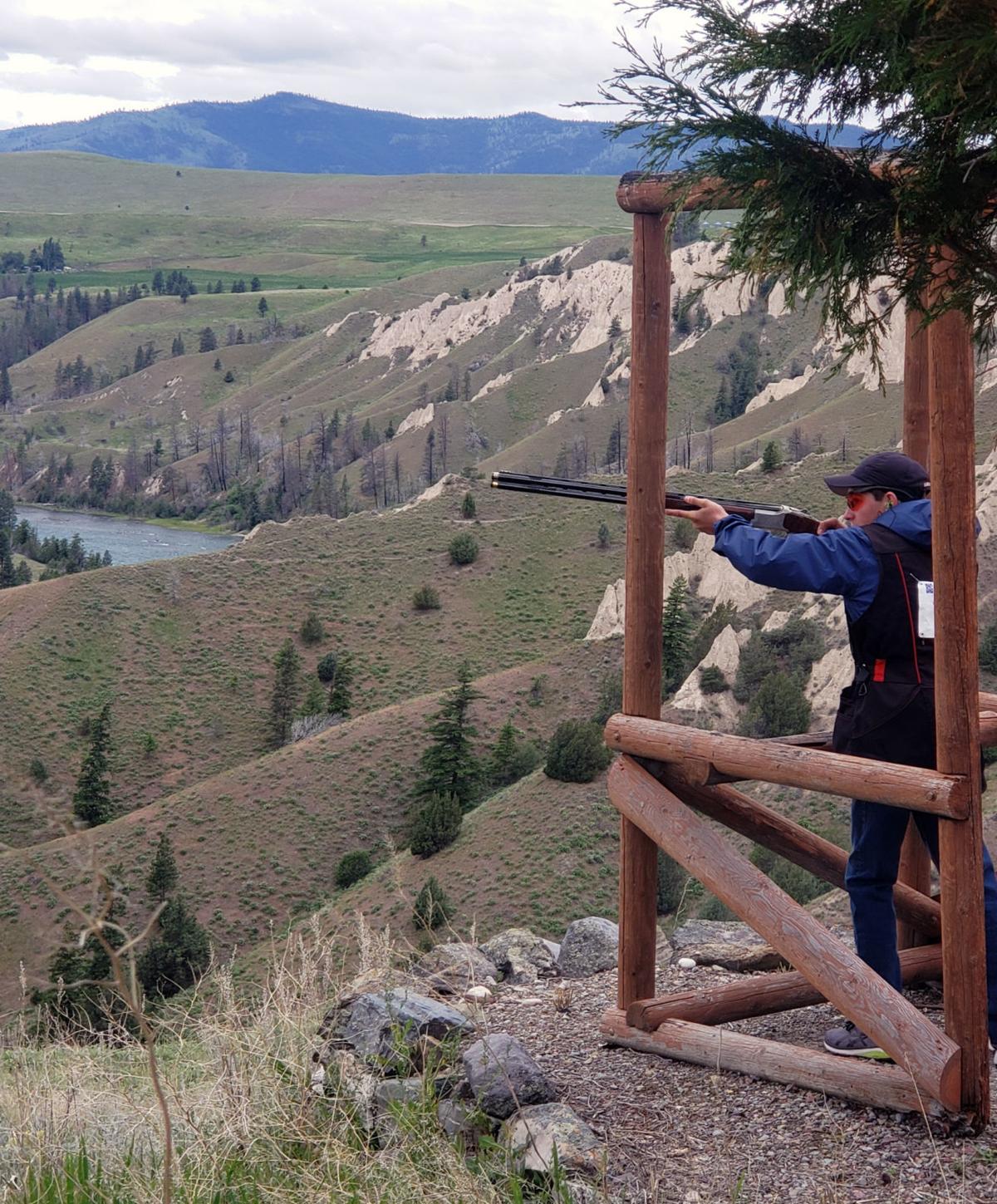 Darby's Austin Ward sights in a clay pigeon during the Montana State Championship at the Big Sky Sporting Clays in Polson on June 6-9. The 13-year-old Ward won the Class D event with a score of 85-83-168. 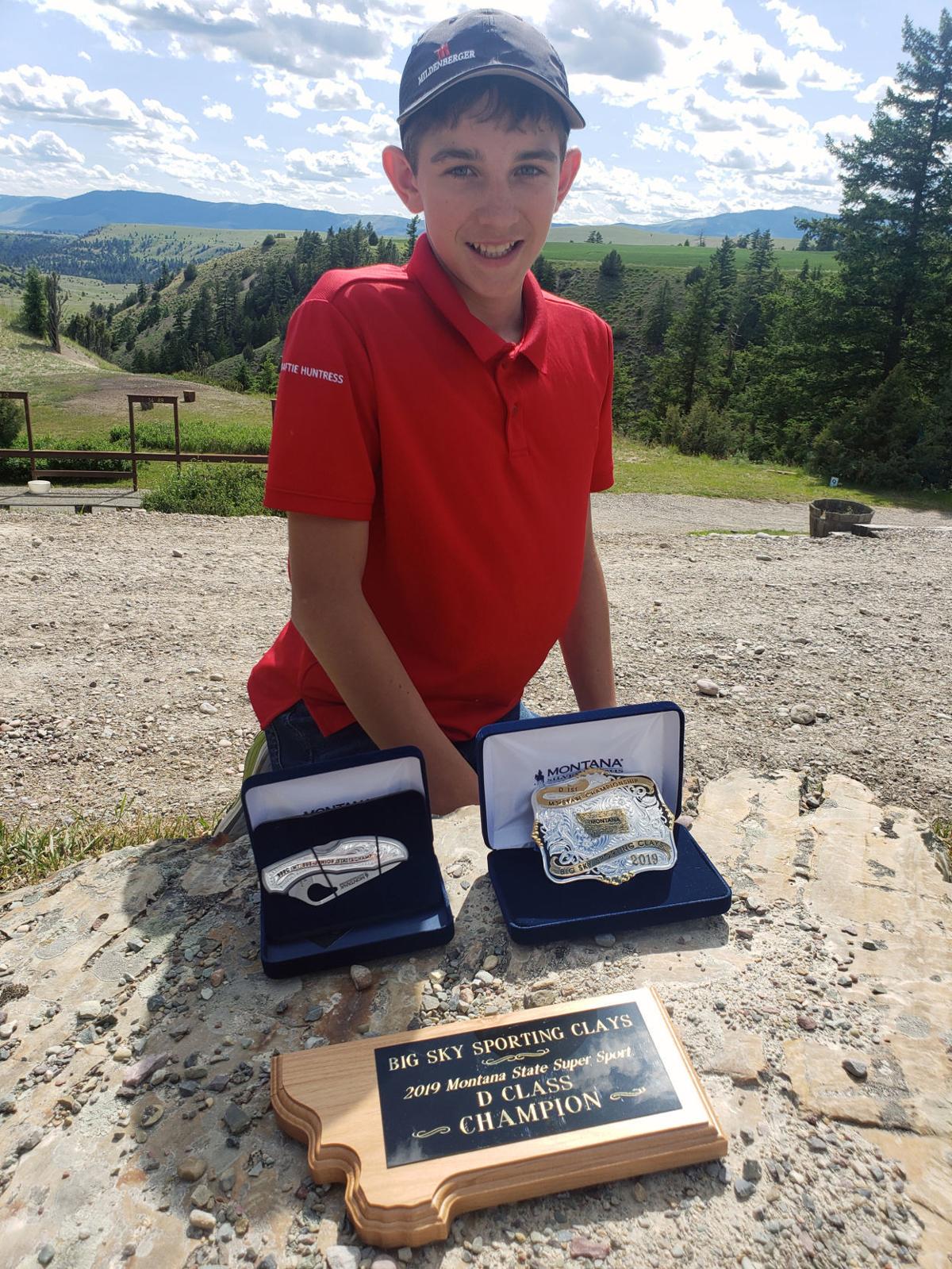 Austin Ward stands with his three awards after the Montana State Championship earlier this month. Ward won the D Class state title, which also awarded him a belt buckle for the high overall score out of 18 people in his class, plus a knife for the top score in the youth division.

Darby's Austin Ward sights in a clay pigeon during the Montana State Championship at the Big Sky Sporting Clays in Polson on June 6-9. The 13-year-old Ward won the Class D event with a score of 85-83-168.

Austin Ward stands with his three awards after the Montana State Championship earlier this month. Ward won the D Class state title, which also awarded him a belt buckle for the high overall score out of 18 people in his class, plus a knife for the top score in the youth division.

At a different tournament while on the course — one designed to simulate shots from station to station that a hunter would make out on the field — Ward was dealt a surprise.

And surprises can be the difference between success and failure with a break action, over-under 12-gauge shotgun needed to take down a pair of clay pigeons at any particular shooting station.

“One day I was in the middle of shooting (at a tournament) and a real rabbit came running out in front of the stand and that was distracting,” Ward said, continuing to explain how he’s able to sight in the actual target. “It’s mostly the mental game, though. Just staying focused and concentrated on the target. There are distractions everywhere and if you do it long enough you can learn to ignore those.”

Ward has been shooting sporting clays for the better part of four years, since he was nine years old. Anyone who knows Ward wouldn’t be surprised to learn that the teenager managed the distraction — to the rabbit's certain gratitude — and he still had a successful round.

The kid is a crack shot. And not just when it comes to shooting.

Mike Potts, an avid shooter, sportsman, volunteer coach and mentor to Ward, remembers the first time he saw the precocious Ward, then just midway through elementary school, at the Hamilton Trap Club.

"Eddie Smith, the president of the club, comes up to me and says, 'this kid looks like he’s a pretty good shooter I’d like you to take a look at him,'" Potts said. "This 9-year-old kid comes walking up with a 20-gauge shotgun, he was almost dragging the thing, and I couldn’t believe how he was shooting."

"At that age, they’re looking one direction, the bird goes the opposite direction and this kid could swing almost 90 degrees across the field and hit a bird that’s moving 42 miles per hour in a direction he didn’t expect."

Ward's aptitude doesn't apply just to the shooting range, though. Ward's mom, Dawn, is quick to point out her son is a straight A student and loves to play football, basketball and mountain bike.

He bagged his first elk last fall — in his first season with a hunting license — and his family has always been into hunting and the outdoors.

But sporting clays wasn't on the radar until Ward's cousins came over to his house one day with a thrower.

"The cousins came over and said ‘let’s go shoot stuff in the air with our shotguns,’ and I said ‘We can do that?’ and they said sure,'" Ward recalled.

Even with a single shot 20-gauge that Ward remembers "kicked pretty hard," he could hardly miss.

"That's when we thought, oh, maybe we should look into this more because he’s pretty good at it," Dawn Ward said.

Four years later it's summers filled traveling to sporting clays events. A week after winning the state tournament in Polson — where Ward also took home top honors in his age group to go along with the state title and another award for a high score in his group — the Wards are in Cody, Wyoming for another tournament. Austin is competing in the C Class now after being promoted from D Class thanks to nine punches, which are essentially points awarded for success at tournaments.

He's done a number of shooting event fundraisers, helping to raise money for nurses in Missoula as well as for the Shriners.

"Those are just fun events, but oh my gosh he has so much fun at them, and he’s won them," Dawn said, chuckling. "Sporting clays is the main event but they have other events like 5-stand and super sporting. Then they have the 410's, the 20-gauge, they have their own events as well, and he shoots them all."

And to end this summer, Ward intends to shoot at nationals.

Potts is excited to see how his talented understudy stacks up.

"I am not kidding you, I’m talking objectively, this is the best shooter in the state in his age group and this is hands down," Potts said. "I bring him out to shoot with me and my friends and everybody turns around and looks at me and says what do you got here?

"To say he’s one in a million wouldn’t even be fair."

When Darby's Austin Ward readied for a sporting clays shooting practice with coach Mike Potts at the Missoula Trap and Skeet Club last month, he got a bit of the rock star treatment from some of the club members there that day.

The accolades for Darby's Austin Ward keep piling up.

Never miss a score. Get your first 3 months for $3!