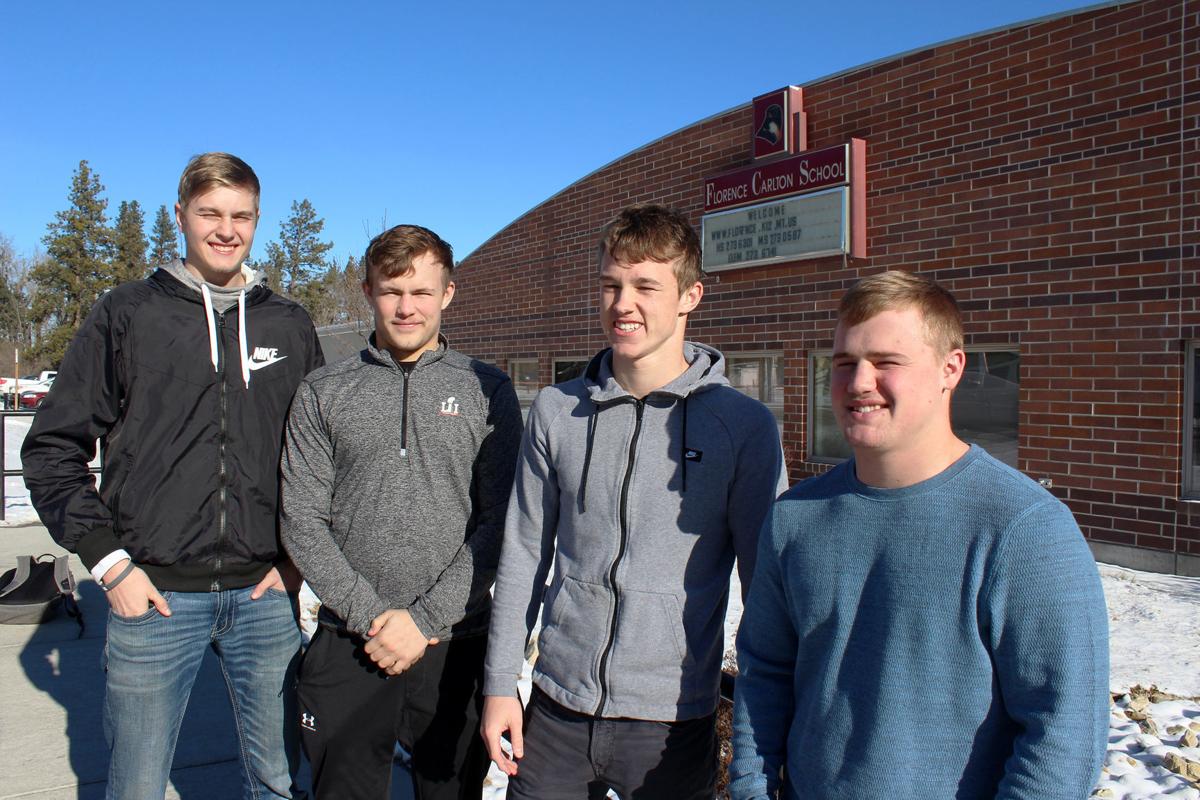 Zach Harrington, Avery Meinzen, Caden Plasmier and Kyler Alm are the leaders of the Falcon wrestling team that they describe as “closer than family.” 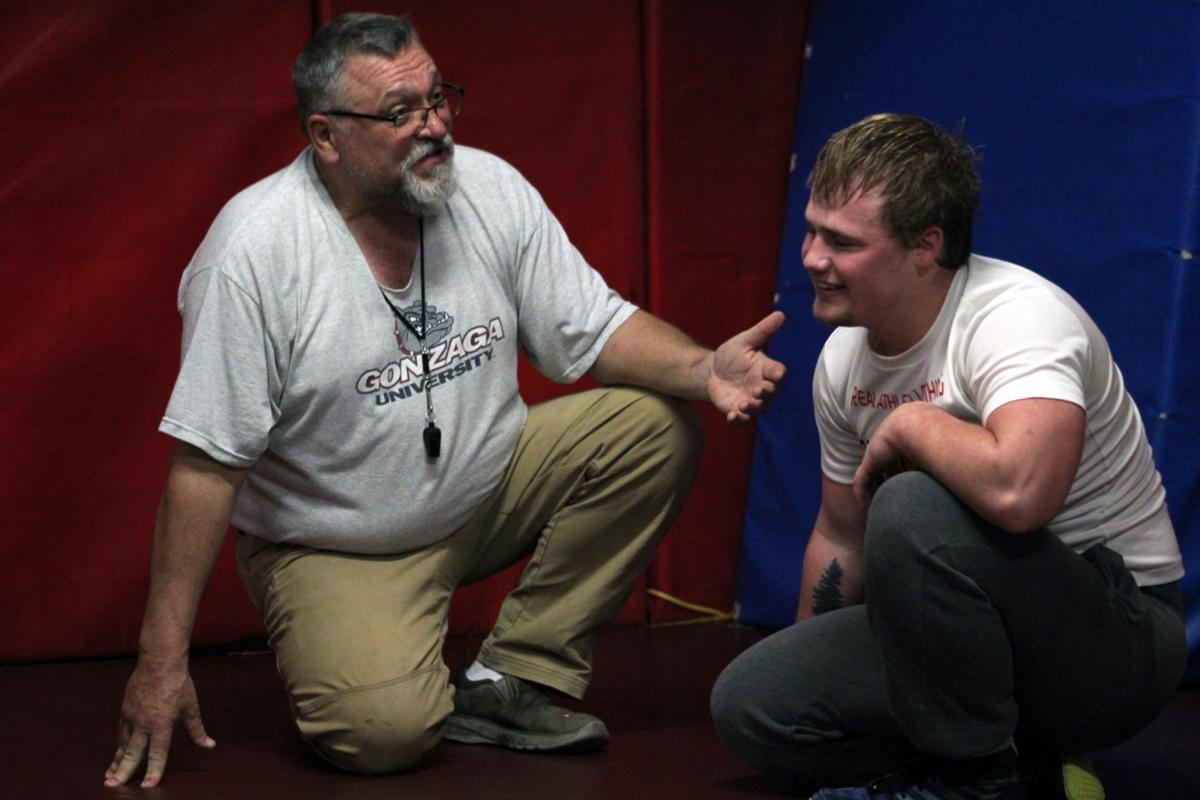 Coach Volkmann (left) talks to his wrestler Kyler Alm at practice Thursday. "He’s always happy, even when it’s the worst possible thing that can happen, he’s always happy and it just wears off on us," Alm said of his coach. "...I gotta pay back what he’s done for me, too. He’s pretty much family to me." 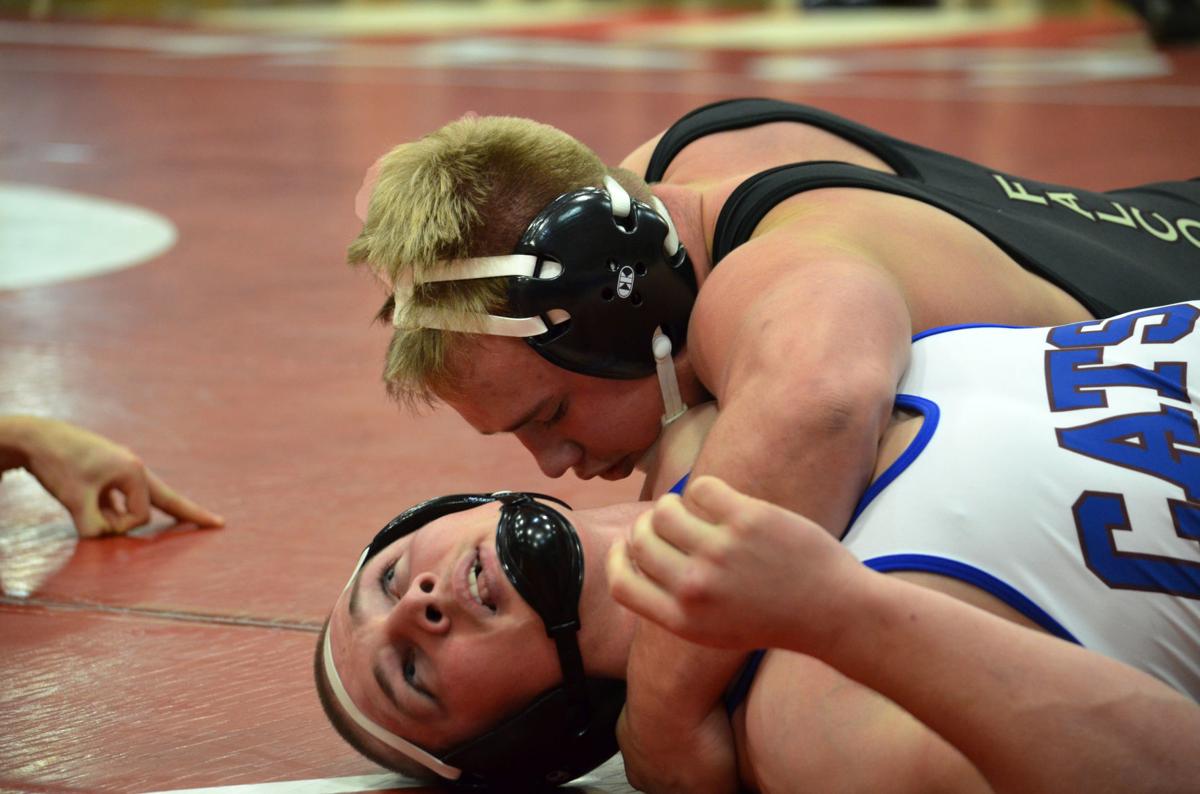 Florence's Kyler Alm works for a pin against Clark Fork's Trey Green during the 2019 Bob Kinney Classic on Saturday, December 14 in Superior. 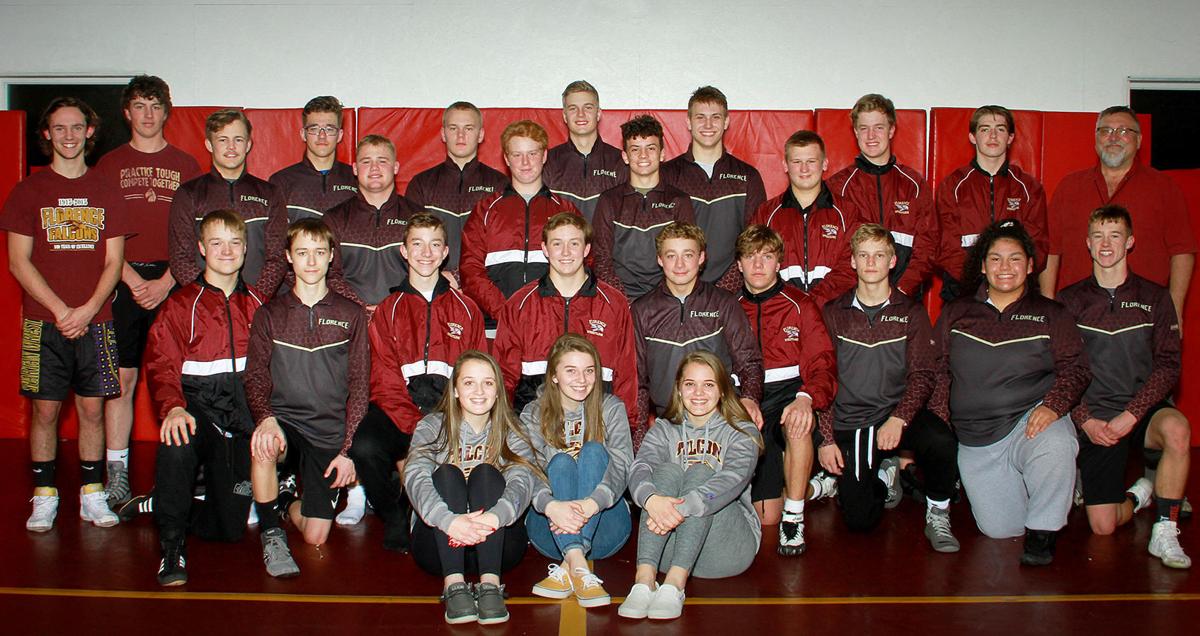 Florence Wrestling Team, coaches and managers are a family of support for overcoming injuries and life’s adversities.

The Florence-Carlton High School Wrestling team is tight, closer than family and learning how to get through life’s challenges.

Four seniors Avery Meinzen, Kyler Alm, Caden Plasmier and Zach Harrington along with their coach Bryan Volkmann have a story about overcoming injuries and life’s adversities.

In addition to Volkmann’s heart attack, open heart surgery and recovery last spring, his wife, Bridgett, passed away just before Christmas. The seniors are supporting their coach to help him through these tough times. They are also showing leadership and teaching younger team members how to overcome adversity.

“There’s not a lot of drama that goes on, we keep it in check and we’re a tight family,” he said. “I consider everyone my brother and it is just a family atmosphere.”

“It’s the family feel and it gives me time with my friends,” Harrington said. “Coach Bryan is always there for us, in and out of season. When I was injured in football, he came to the hospital to see me. I tore a hole in my neck which is a super rare freak accident.”

The injury ended his high school athletic career, but he stayed on the wrestling team and helps lead and inspire other members.

“Coach has gone through a lot of stuff — a heart attack and he recently lost his wife to cancer, but he’s always been there for us and we were there for him,” Harrington said. “It’s mutual and hard to see him going through tough times.”

Alm said those times are formative.

“It is the tough times that makes us stronger as a team,” he said. “Bryan only missed a day after his wife passed then he was right back with us because that’s what keeps him going. It is awesome to see that he cares that much about us. He’s helping us meet our goals.”

Alm said the seniors have been hit with big injuries that have put a damper on the season.

Meinzen broke his back his freshman year and is wrestling with a torn ACL and powering through; Harrington is out do to a neck injury; Plasmier is out due to concussions and Alm was unable to wrestle his junior year due to a brain bleed, but is back.

“The injuries have molded us into the people we are today,” Alm said. “They made us better people.”

Avery Meinzen has been wrestling for eight years.

“My torn ACL requires surgery but I’m postponing that until after the season because I’ve got aspirations of being a state champion this year,” he said. “This year I’m 5 and 0 in the 116-weight category.”

Caden Plasmier is no longer competing but is helping on the team by sharing knowledge and inspiration.

The four seniors said the trial of injuries and life changes has woven them into a tighter bond.

“We go through a lot of adversities and I feel we’re stronger to overcome them,” Alm said. “We’ve been through hardships and can relate when someone else goes through it. We’re always there for each other.”

Coach Bryan Volkmann agreed and said he needs the team even more after the loss of his wife, Bridgett.

“These are super kids. I need them right now,” he said. “Wrestling gives me a little bit of relief from my loss. My wife said I had to keep coaching. She knew I needed something to focus on. When I’m with the team I can focus on that 100%.”

He said it is important for him to be with the kids and inspire them.

“Everyone goes through a tough time at some point in their life, you just have to pick yourself up, dust yourself off and keep working hard,” he said. “I just want to try to help these kids and show them that in real life you can do that. Just because the going gets tough it doesn’t mean that you can quit.”

He describes the team as tight.

“Like musketeers,” Volkmann said. “I owe them, they helped me recover and now they’re helping me recover again. We share in each other’s pain and we lift each other up. All my guys on the team feel each other’s losses, it brings us together.”

“It’s hard to do, it is a real personal sport,” he said. “Wrestlers are one-on-one and bare their souls to everyone watching on that mat and it is a special thing. It’s one thing to act like you’re tough it’s another thing to prove it. That’s what I love about this sport, there are no fakers.”

He said that although the Falcons have had tough times they are pressing on.

“We’ve had quite a journey but we’re still moving, the Antarctic explorers called it slogging,” he said. “We are just putting one foot in front of the other and we’re going to keep going. These are cool kids.”

To call the Florence-Carlton High School Girls’ Basketball team “young” is an understatement. Emma Stensrud is the only returning starter, only senior and a mentor to the rebuilding team.

Hamilton resident Sybil Solomon has compiled “Time to Get Out and Play” a booklet of interesting things to do with young children in the Bitterroot Valley.

Volunteers are needed for the upcoming 39th annual Bitterroot Winter Special Olympics at Lost Trail Powder Mountain on Jan. 29 and 29.

Zach Harrington, Avery Meinzen, Caden Plasmier and Kyler Alm are the leaders of the Falcon wrestling team that they describe as “closer than family.”

Coach Volkmann (left) talks to his wrestler Kyler Alm at practice Thursday. "He’s always happy, even when it’s the worst possible thing that can happen, he’s always happy and it just wears off on us," Alm said of his coach. "...I gotta pay back what he’s done for me, too. He’s pretty much family to me."

Florence's Kyler Alm works for a pin against Clark Fork's Trey Green during the 2019 Bob Kinney Classic on Saturday, December 14 in Superior.

Florence Wrestling Team, coaches and managers are a family of support for overcoming injuries and life’s adversities.