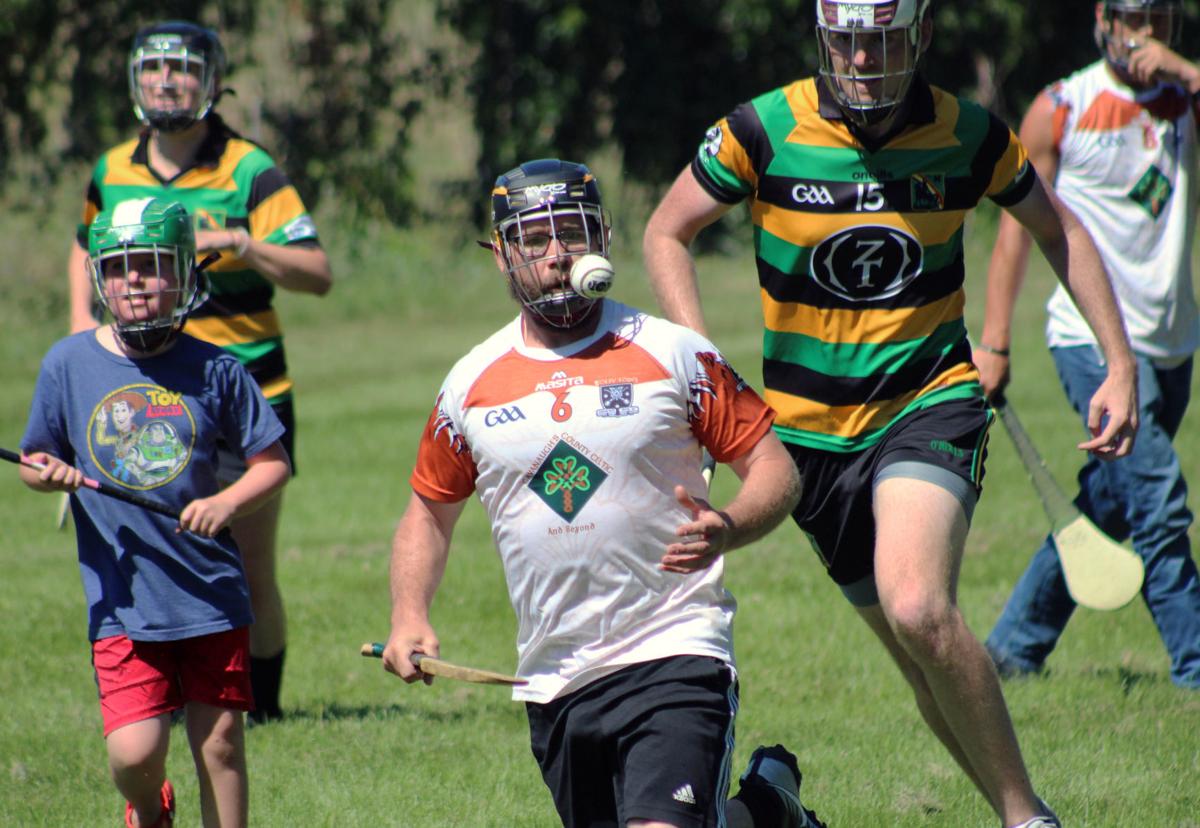 Shaunessey Scott (middle) tosses the sliotar (ball) during a hurling scrimmage and demonstration on the Marcus Daly Mansion's west lawn Sunday at the Bitterroot Celtic Games and Gathering. 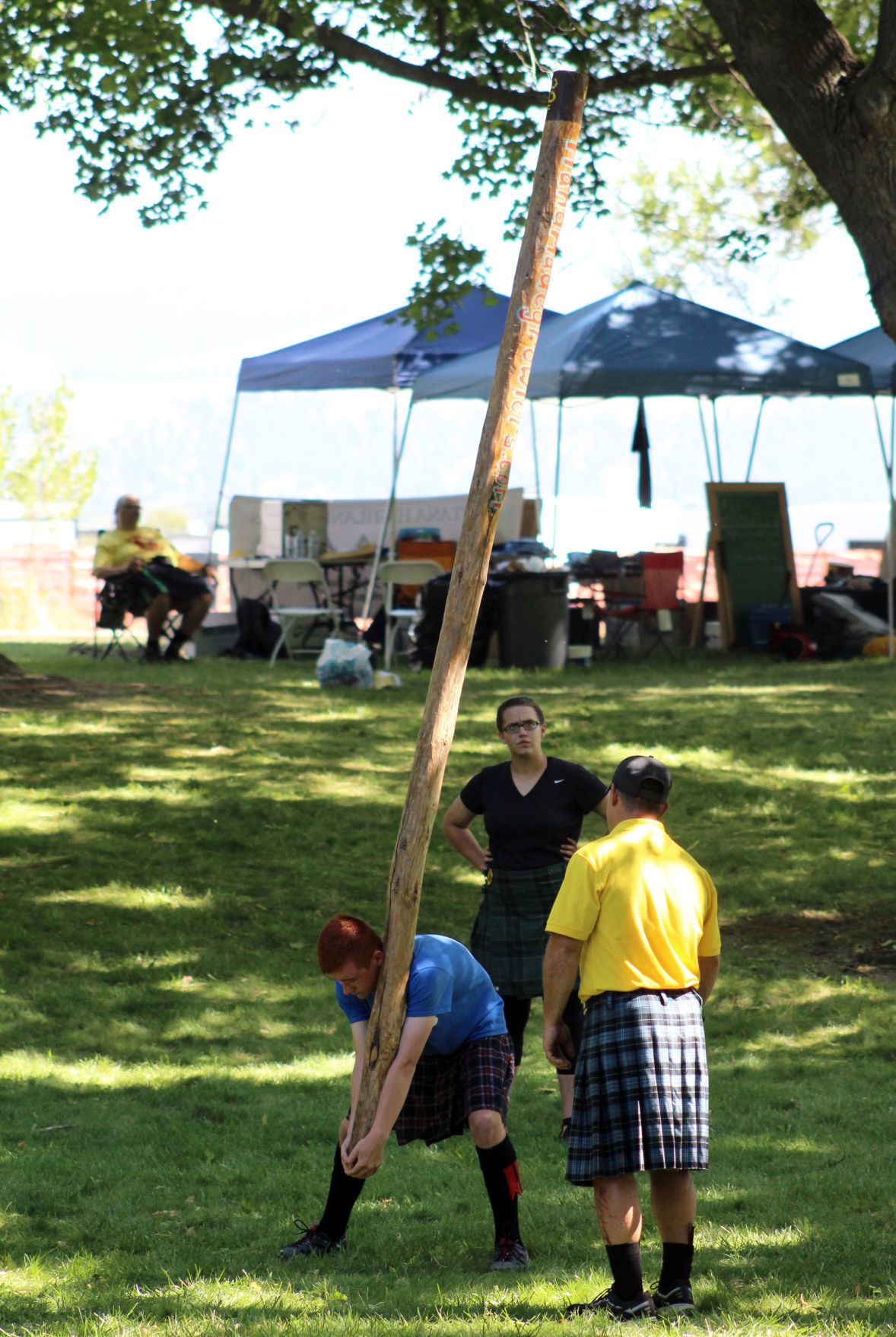 Fifteen-year-old Garrett Loraas shoulders the caber before tossing it Sunday at the Bitterroot Celtic Games and Gathering. 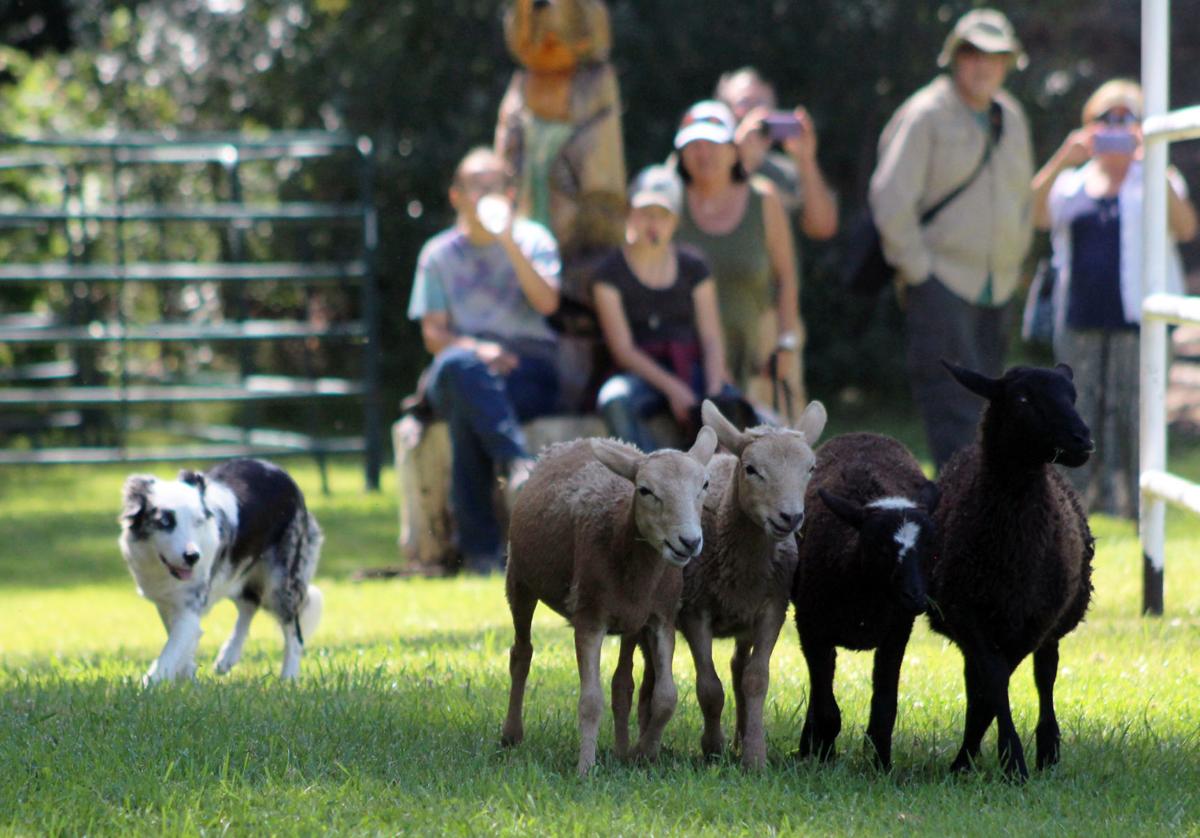 Tikka (left) listens to her trainer Desiree Moffett as she herds sheep during a demonstration Sunday at the Bitterroot Games and Gathering.

HAMILTON — While the hurling scrimmage and demonstration Sunday at the Bitterroot Celtic Games and Gathering wasn't technically a part of the Highland Games going on at the Daly Mansion fields Sunday, hurlers were quick to point out the Irish sport is a Celtic game just like the others.

"When people think of Celtic Fest they think of the Scottish heavy athletics, but hurling is a Celtic game, too," said John Birch, a member of both the University of Montana club hurling team and the Thomas Meagher hurling club based in Missoula.

What exactly is hurling, you ask? Birch can explain.

"It's an ancient sport that's been played continuously for 3,000 years. It's the precursor to most modern stick sports. Hockey, baseball, you name it. They all come from hurling," Birch said. "The game is a field sport played like baseball, soccer and rugby all at the same time."

Essentially, hurlers (competitors) use a hurley (a wooden club with a flat paddle on one end) to move a sliotar (ball) up the field by passing, kicking or balancing the sliotar while running to try to score.

Hurlers on Sunday, which included first-time players alongside members from Missoula's Meagher club and Butte's new Wolf Tones club, took aim at a goalie that defended a soccer net. Traditional hurling fields also have goal posts above the net that can be scored on for one point versus the 3-point goal in the lower net.

"It's tons of fun. If you take soccer, add the ball handling of tennis and throw an ax in your hand, I think that's close to Irish hurling," Wolf Tone club member Shaunessey Scott said.

The hurling scrimmage ran alongside another demonstration that's a sport in its own right, though the main athletes run on four legs.

Sheep herding demonstrations were provided all weekend at the Celtic Festival by Jim McKay and Desiree Moffett, who called out commands to their collies and shepherds through a quagmire of delighted spectators. From there, the dogs wrangled and guided a flock of sheep in different directions.

The dogs loved the sport they're bred to do.

"For the dog, it really is rewarding. It's what they want to do," said Moffett, a border collie breeder and trainer. "...It's a great sport."

McKay, with the Australian Shepherd Club of Montana, explained to onlookers what Moffett was working on with the dogs while herding. He also gave stories about the dogs from their herding competitions.

But, just like in Celtic culture, herding is about practicality.

"My dogs they are used to taking out sheep to pasture and just keeping in them one little area. And then they help bring us back home with us and pen them up at night," Moffett said. "They have to know how to pen them and have them go through gates and obstacles."

In the traditional highland games — going on between harp concerts, clan recognition and bagpipe performances — obstacles were being used for feats of strength.

Fifteen-year-old Garrett Loraas took his best crack at the caber toss toward the end of the festival. He gathered under the caber, a tapered wood pole that can extend up to 20 feet and weigh 80-130 pounds, and tried to send it flying for an end-over-end flip.

The caber landed on its opposite end, but wouldn't turn over to fall in the full-scoring 12-o-clock position.

Loraas, in kilt and stockings, remained in good spirits, though.

"It's my last year in juniors and it's just fun," he said.

The winner of the junior division — deciding by combining scores from all nine Highland Game events — was Kage Moore. His weight-for-height heave of 20 feet was tops in his age group by 3 feet, and he led in the sheaf event, the light hammer, light weight for distance, heavy weight for distance, open stone and braemar stone events. Daggon Griggs took the only other event in the junior divison, the heavy hammer.

It was a competitive division, too, as nine 14 and 15-year-olds took part in the junior division. That didn't include the 68 adult athletes who turned out for the Highland Games in Hamilton — the most throwers at a Montana Highland Games.

"People are kind of jumping on board, hitting quite a few of them across the state and they know this is the biggest one," said the games' athletic director Garrett Middleton. "It's such a great atmosphere. ...You had a couple hundred people watching the sheaf toss at one time.

"It’s a pretty special games when you have that many people out there cheering you on. ...There’s the piping, and drumming and dancing and music. It's pretty cool."

It was also pretty cool that a married couple from Rathdrum, Idaho each captured first-place in their respective divisions at the highland games. Kristine Rothwell won the women's division and Kyle Rothwell edged out Justin Jessop in a tiebreaker in the men's amateur A division thanks to his high score in the caber toss.

With the highland games being a good bad-to-the-bone barometer, the Rothwells showed they're one couple not to mess with.

You wouldn't want to anyway, because the games, just like the tenth annual Bitterroot Celtic Games and Gathering that hosted them, were all in fun.

Corvallis High School’s Blue Devil Girls Varsity Basketball cohesive team is fired up with a focus on improving and determination for victory in the future. They play Hamilton on Thursday and Dillon on Saturday.

Florence wrestling team pressing on despite injuries, illness and loss

The Florence-Carlton High School Wrestling team is tight, closer than family and learning how to get through life’s challenges.

The Stevensville High School Boys Basketball team is having a season of improving, rebuilding and reaching for their first win of the season.

Two Bitterroot coaches are finalists for National Coach of the Year

The proposals to add girls wrestling and boys powerlifting were passed at the Montana High School Association annual meeting on Monday.

Shaunessey Scott (middle) tosses the sliotar (ball) during a hurling scrimmage and demonstration on the Marcus Daly Mansion's west lawn Sunday at the Bitterroot Celtic Games and Gathering.

Fifteen-year-old Garrett Loraas shoulders the caber before tossing it Sunday at the Bitterroot Celtic Games and Gathering.

Tikka (left) listens to her trainer Desiree Moffett as she herds sheep during a demonstration Sunday at the Bitterroot Games and Gathering.