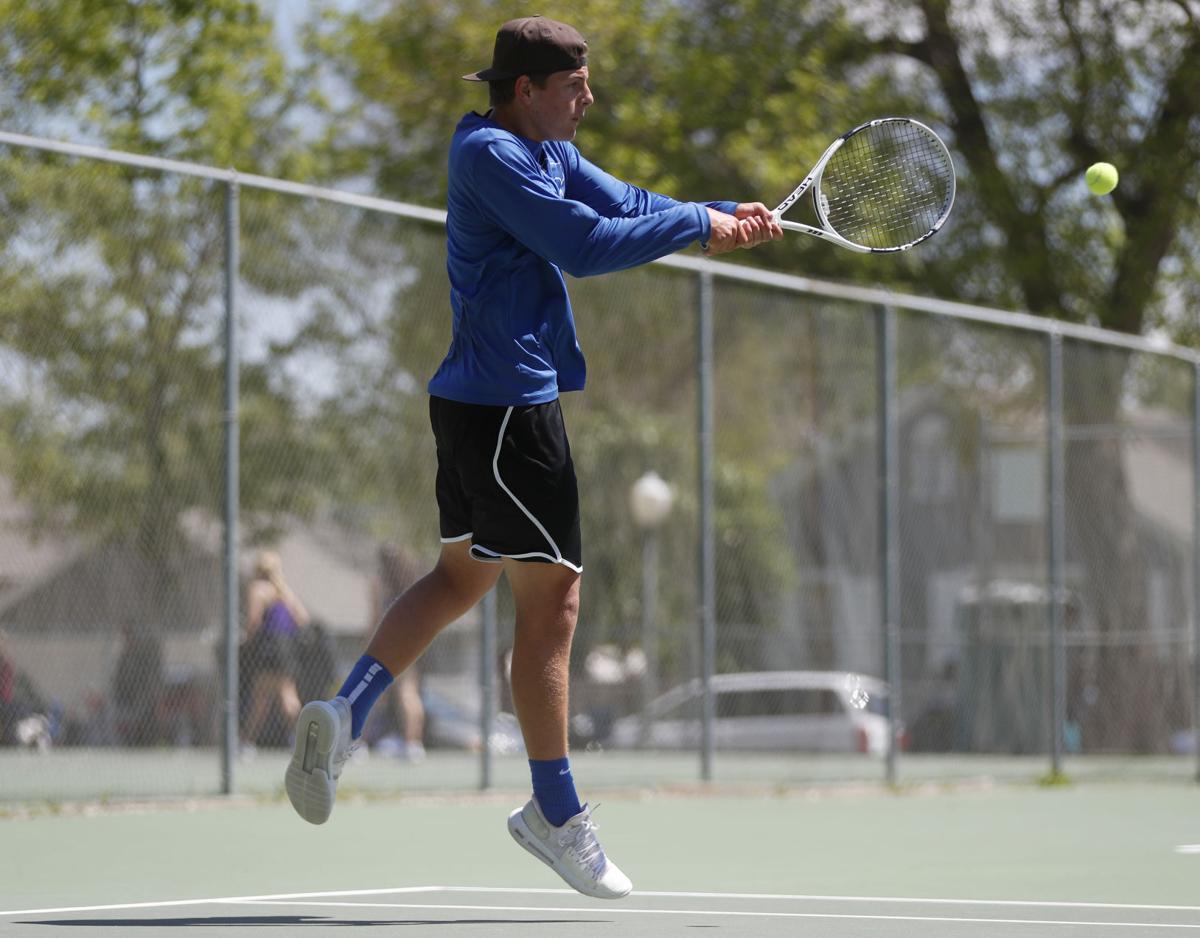 Columbia Falls’ Cody Schweikert hits a ball during a boys singles match at the Class A state tennis tournament Thursday at Pioneer Park in Billings. 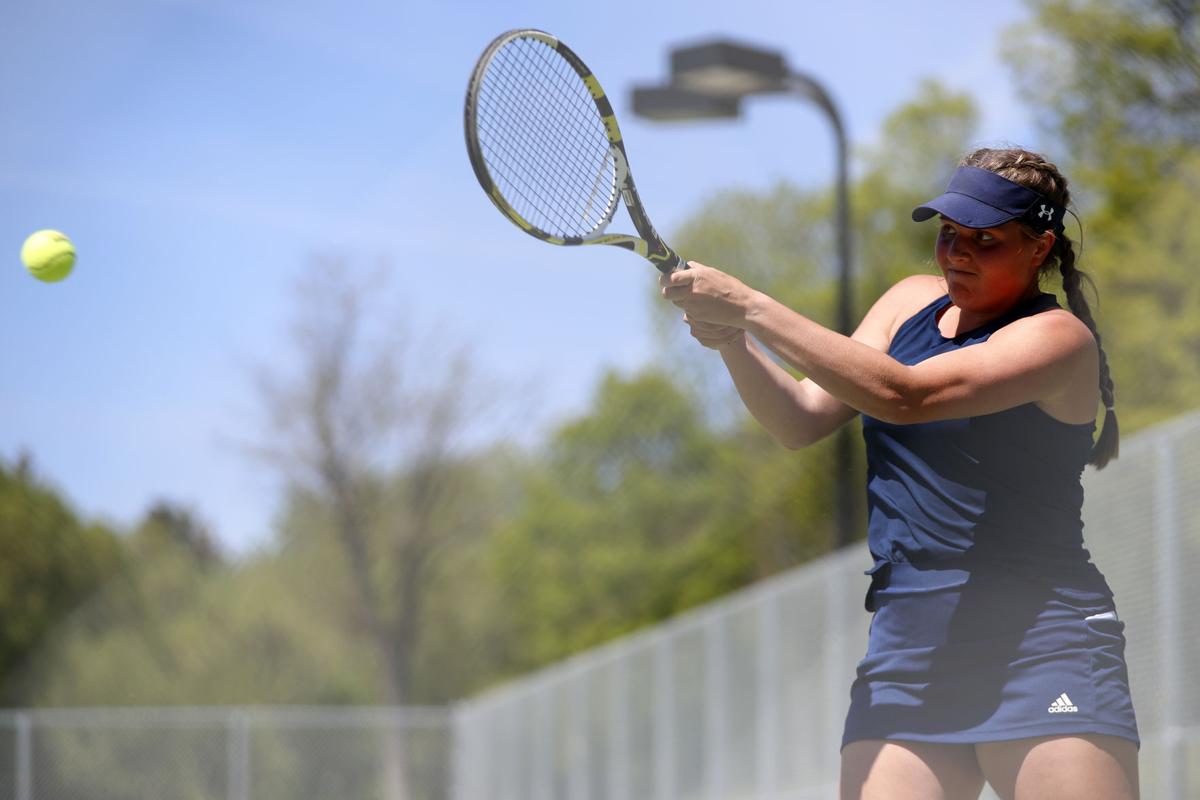 Miles City’s Emily Daughty returns a serve during the first day of the Class A tennis tournament on Thursday at Pioneer Park. 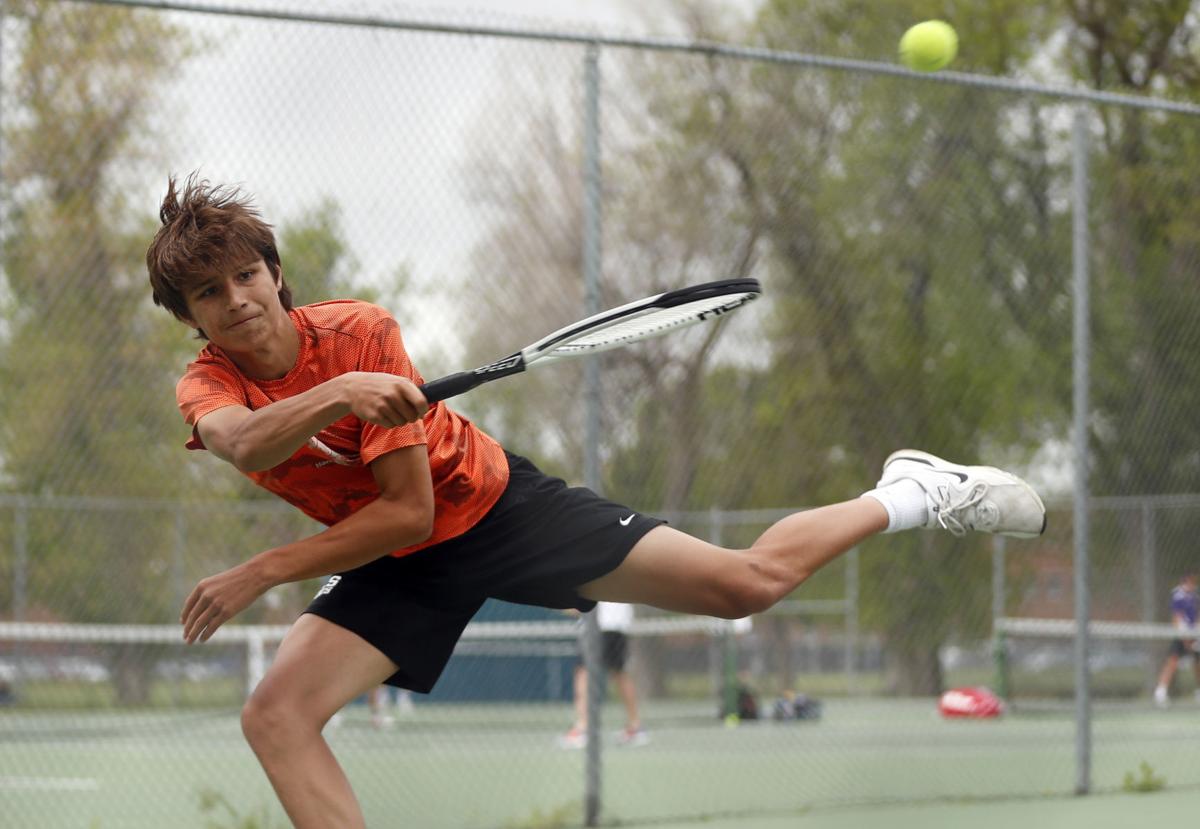 Hardin’s Sean Mehling hits an off-balance shot during the first day of the Class A state tennis tournament Thursday at Pioneer Park.

BILLINGS — The one thing Gracie Smyley wants to avoid is complacency.

Whitefish’s top singles player marched into the semifinal round of the Class A state tennis tournament with two clean victories Thursday at Pioneer Park. And though she’s on track to retain the championship she won as a sophomore in 2019 — remember: there was no tourney last year — Smyley is taking nothing for granted.

“It feels pretty good, but I definitely don’t want to assume anything,” said Smyley, who is back to winning at state after COVID-19 forced the cancellation of the 2020 campaign. “I’m glad I won my two matches today. It’s looking good so far, but you never know. That’s tennis. I’m just really glad to be here.”

Smyley topped Lewistown’s Kayla Arndt 6-0, 6-0 in her first-round match, then dispatched Hardin’s Katana Reisig 6-1, 6-1 for a smooth transition into the semis on Friday.

Smyley, who plans to attend Whitworth College in Spokane, Washington, next year to play both tennis and basketball, said she tried mixing shots more than usual on Thursday, combining baseline lobs with a penchant for going to the net.

But, she said, there’s room for improvement Friday on what will be the final day of tennis of her high school career.

“I played pretty well,” Smyley said. “I was just trying to feel things out today with both matches. It worked out.”

“I’m definitely going to have to get more first serves in” on Friday, she said. “I’ve got to move my feet better and expect anything, be ready for any player and have fun.”

Smyley will face Maddie Weber of Stevensville, who outlasted Miles City's Emily Daughty 3-6, 6-4, 6-3 in the second round. The other semifinal match will pit Hamilton’s Eliana Foss against Columbia Falls’ Hannah Schweikert.

In boys singles, Miles City’s Dalton Polesky is set for a semifinal match Friday against Jayce Cripe of Whitefish. It is a rematch of a first-round meeting from 2019, which Polesky won in straight sets.

Polesky advanced Thursday with wins over Libby’s Michael Hollingsworth (6-1, 6-0) and Dillon’s Marcus Sandall (6-0, 6-1) at Rose Park. He is trying to add to a family legacy: Polesky’s father, Keith, was a Class A singles champion at Glendive in the mid-1980s.

Hardin had a solid day in boys doubles, as the tandems of Ben Noteboom and Kent Swisse and Jace Guptill and Sean Mehling each moved into Friday’s semifinals.

Despite advancing, Warp said he and Maloughney hope to play better than they did on Thursday — and that they’ll need to in order to beat the Bulldogs.

“We know it’s going to take more to beat them because they’re probably the favorites here. But we know we’re capable of that,” Warp said. “We have to play the way we play and not step out of our zone. If we play the way we’re capable, we should be in the mix.”

The winner of that match will face either Guptill and Mehling or Polson’s Michael Smith and Torrin Ellis in the boys doubles final.

An anticipated semifinal match in girls doubles Friday features Hardin’s Macie Flamm and Rilee Green against Polson’s Berkely Ellis and Qia Harlan. Ellis and Harlan defeated Flamm and Green in the second round in 2019 on their way to an appearance in the championship match.

Both teams are ranked No. 1 in their respective divisions.

Polson also put Taylor Collinge and Clara Todd into the semis. They will take teammates Ara Mercer and Megan Rost, who knocked off Corvallis' Molly Powell and Bailey Jessop 3-6, 6-3, 7-2 in the second round.

Photos: Class A state tennis under way in Billings

The Class A State Tennis Tournament kicked off Thursday morning in Billings. The champions will be decided on Friday.

Columbia Falls’ Cody Schweikert hits a ball during a boys singles match at the Class A state tennis tournament Thursday at Pioneer Park in Billings.

Miles City’s Emily Daughty returns a serve during the first day of the Class A tennis tournament on Thursday at Pioneer Park.

Hardin’s Sean Mehling hits an off-balance shot during the first day of the Class A state tennis tournament Thursday at Pioneer Park.