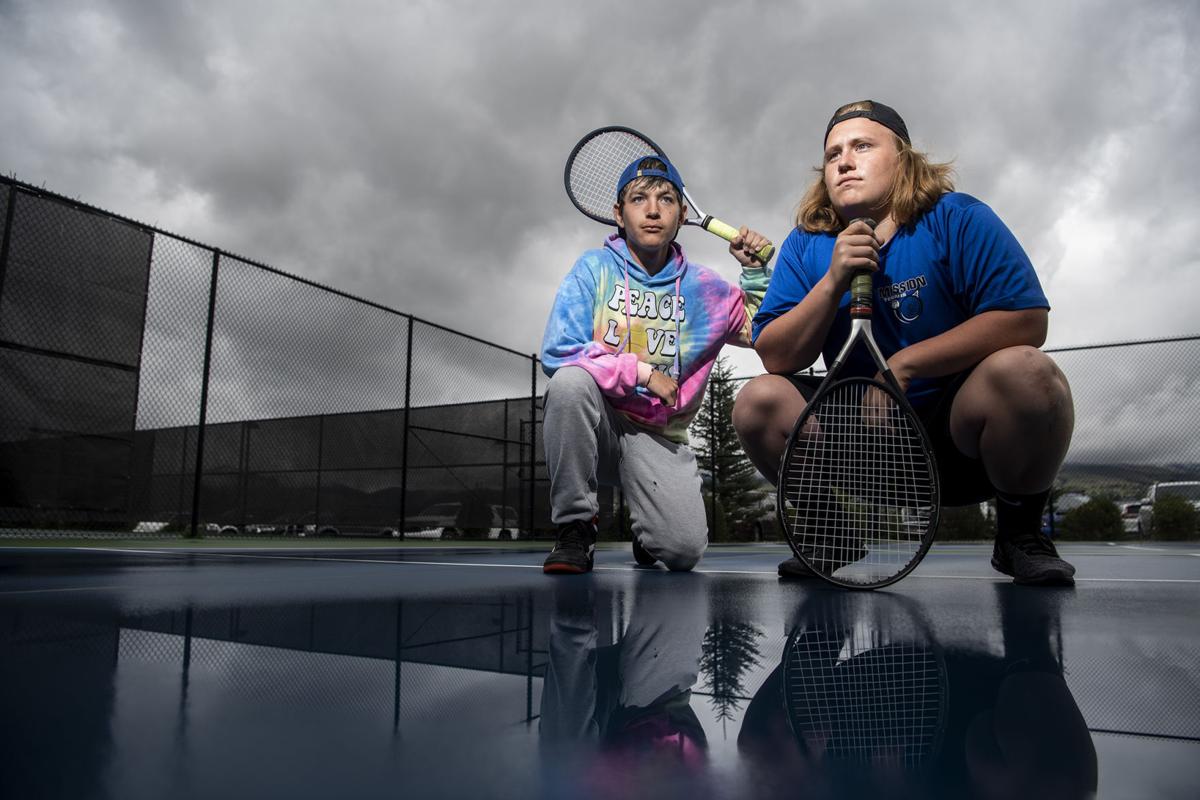 St. Ignatius Bulldogs Kayden Carter, left, and Lalo Bravo are two wins away from a State B-C boys doubles championship. The pair defeated a team from Great Falls Central in the quarterfinals Thursday, 6-1, 6-3, at the Peak Racquet Club in Missoula. 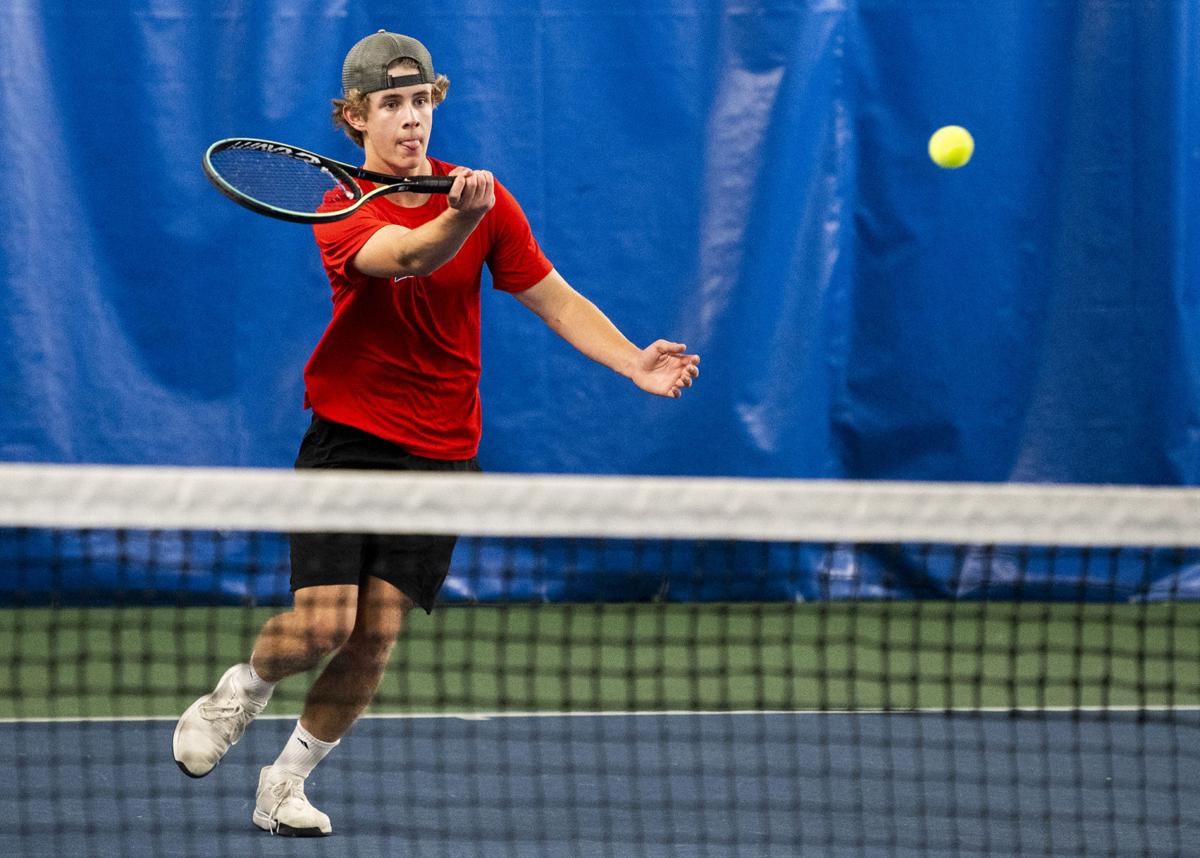 Bigfork’s Blane Barrows returns the ball during his consolation singles match in the State B-C tennis tournament Thursday at the Peak in Missoula.

MISSOULA — The wind picked up, the rain started falling and St. Ignatius tennis coach Kimimi Ashley made the tough decision to cancel practice.

It was two weeks ago and Lalo Bravo still remembers it well. Maybe because he and his doubles partner, Kayden Carter, kept on playing.

"We were just like, 'Let's put sweatshirts on and keep going,'" the Bulldog senior Bravo recalled. "Kimimi is such a cheery person. She'll say, 'Hey, you know I really have to officially call practice. But if you want to stay and hit then you can.'

"And who's going to say no to that? If it's not too much for us to handle, we play through."

It's that enthusiasm and spirit that has Bravo and Carter two wins from a State B-C doubles championship. They steamrolled to a 6-1, 6-3 win over their opponents from Great Falls Central and on Friday they'll battle Loyola Sacred Heart's Sam Caras and Joe Kirschenmann in a semifinal. Loyola's Finn Richardson and Carter Topp will battle Sneed and Gray from Cut Bank in the other semifinal and the winners will play for gold in the afternoon or early evening.

All of Thursday's state matches were played inside at the Peak in Missoula because inclement weather. Since there are only five courts available, the second day of the tourney stretched well into the evening and Friday also promises to be a long day with lots of waiting.

Bravo and Carter didn't seem to mind the idle time Thursday. They're just happy to be playing in such a big match Friday.

"Since it's Lalo's last year, I'm trying to put my all into this so we can both make it maybe first, or if not second place," Carter said. "It's amazing to be out there versus different kids from different schools. You learn their technique and how you can get better.

"I'm more focused about playing right now than I was last time (in 2019). My serves are way better now. I've been practicing them a lot."

Bravo, who also plays basketball and the center position for the St. Ignatius football team, is well aware Friday is the biggest day of his high school tennis career.

"It was definitely a goal for both of us to get here," he said. "My goal is to win it all and I hope it's (Carter's) goal too.

"There's definitely a lot more pressure. You don't get another shot and it's now or never. But I'm ready."

In other winners' bracket boys action Thursday, Loyola's Jake Bellamah stayed undefeated and stormed into the singles semifinal round with a 6-1, 6-1 win over Whitmier of Conrad. He will play West of Bigfork. Also reaching Friday's semifinal round were Riley Reimer of Valley Christian and Clay Rouse of Darby.

In girls singles action, Loyola's Evelyn Deschans, who took top honors in the 2019 state meet and has never lost to a Class B-C opponent, swept into Friday's semifinals with a 6-0, 6-0 win Thursday afternoon. She was joined in the semifinals by teammate Gio Horner, Conrad's Broesder and Zietzke of SHS.

"It's really cool just to see who else is out there," Crabb said of the state meet. "In divisionals, you only see who you play all year. You come here and it's kind of an eye opener."

"I like it because it's personal, just seeing what you can do alone. Then it's nice to meet new people across the net."

In girls doubles, Loyola's Grace Daniel and Ava Bellamah kept their state championship hopes alive and will next play in the semifinal round. They appear to be on a finals collision course with Funk and Cummings of Choteau, who handed the Breakers duo its only loss earlier this season.

(Not all matches are included. Play was forced inside because of inclement weather and action extended well into the evening.)

Round of 16 (scores unavailable)

Round of 16 (scores unavailable)

Innovative insulation unveiled for Team USA ahead of Winter Olympics

St. Ignatius Bulldogs Kayden Carter, left, and Lalo Bravo are two wins away from a State B-C boys doubles championship. The pair defeated a team from Great Falls Central in the quarterfinals Thursday, 6-1, 6-3, at the Peak Racquet Club in Missoula.

Bigfork’s Blane Barrows returns the ball during his consolation singles match in the State B-C tennis tournament Thursday at the Peak in Missoula.