Become a Member
Read Today's E-edition
Share This
Class AA playoffs: Missoula Sentinel versus Billings West, round two for the ‘21 state title
0 Comments
Share this
1 of 2 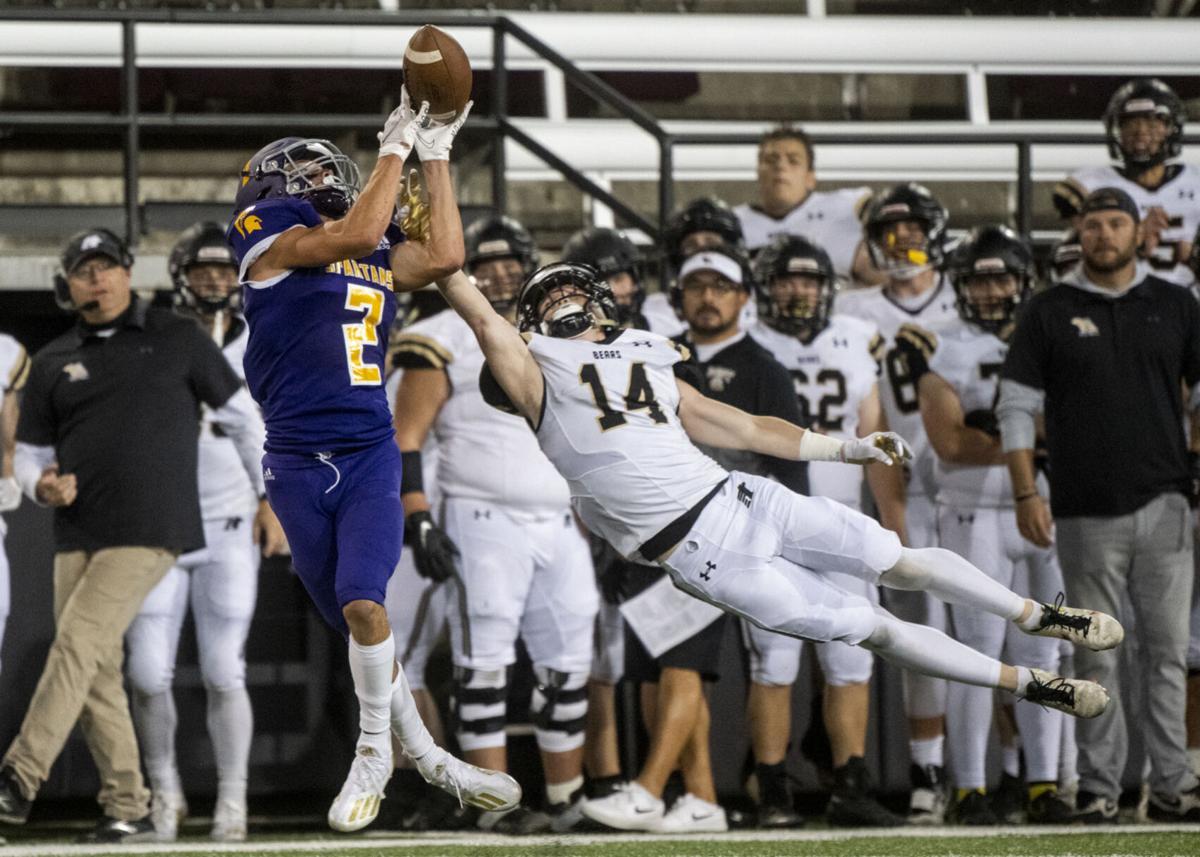 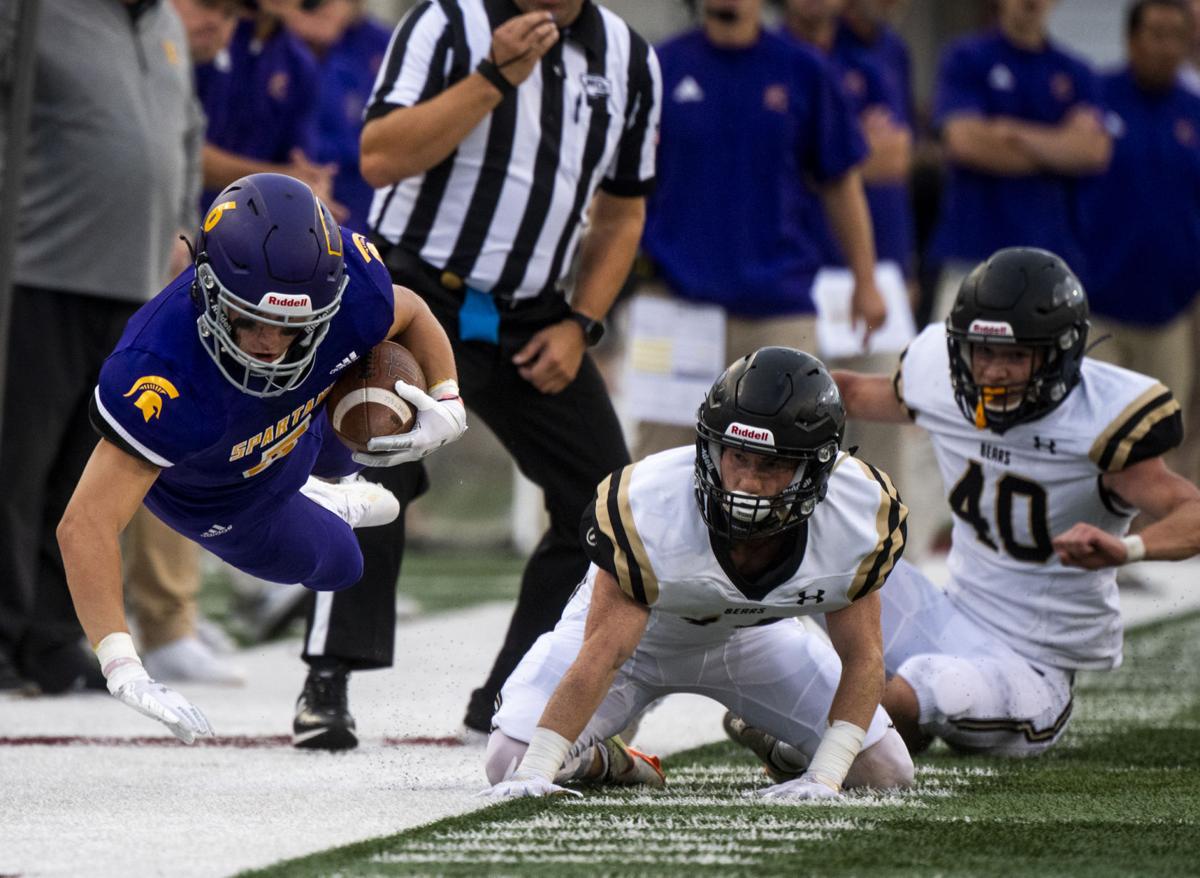 Sentinel’s Adam Jones (6) is tackled out of bounds during the high school football game between Missoula Sentinel and Billings West at Washington-Grizzly Stadium, Friday, Aug. 27.

MISSOULA — It feels like déjà vu and fans, media members, players and coaches have all seen this before.

The undefeated Missoula Sentinel football team, led by a host of seniors and college-bound talent and a dominant defense, going up against a similarly loaded Billings West team, with its own college-bound leaders and suffocating defense, in Friday night's State AA title game at Missoula County Stadium.

No, this isn’t a glitch in the matrix or a weird lapse in memory. It’s Sentinel versus West for the second time this season and the second straight year in the state championship tilt.

No longer chasing a AA state title that eluded their grasp for nearly half a century, the Spartans are instead looking to become the first AA repeat champ since Billings Senior did so in 2016 and '17. Since then, three different teams — Billings West in '18, Bozeman in '19 and of course Sentinel in '20 — have brought the trophy home.

The Spartans (10-0) have won 20 straight games, including the 2020 title they won at Billings West (10-1). West, meanwhile, has lost just once since that title game, and it came against who else but the Spartans at the beginning of this season.

It went down to the wire, and was really a toss-up for much of the game at Washington-Grizzly Stadium in Missoula. Zac Crews and the Spartans made a comeback after trailing 19-14 with 7 minutes left when Spartans defensive back JJ Dolan picked off West QB Isaiah Claunch to set up a Sentinel scoring drive and a 22-19 late lead.

The Spartans’ defense had one more stop in them to earn the win in dramatic fashion when Dolan again snagged an errant pass from Claunch.

"He's feeling good," Golden Bears head coach Rob Stanton said of his senior quarterback. "The (interception) I think in the end zone, Mr. Dolan picked that off ... that's part of it. He's felt that when we get some short screens right away or get the ball out of his hands gives him confidence. He's feeling well."

That last game was in late August; Sentinel is a different team and so is West, and the coaches of both understand that.

For Sentinel, there's been evolution in the clarity of player roles. In August, the Spartans were working with an inexperienced and brand new offensive line, plus a fresh running back and a first-year starting quarterback who also plays defensive end.

"Early in the year you're allowing kids to experiment with their talent level and, now, they know exactly what their strengths and weaknesses are," Spartans coach Dane Oliver said. " ... We felt our offensive front, specifically, that was a young O-line the first time we played and now they've got 10 games under their belt."

West, meanwhile, had a different case than Sentinel in Game One. The Golden Bears returned many of their most talented players, basically most of their starters. But it was still the first game of a new season and, what Stanton noted is the conditioning and just how much more in-shape his team is now.

"We've had some guys trim up a little bit," he said. "I've noticed we are a little bit slimmer. ... Little more in shape and getting in that game shape. ... That first game you're not going to be very good and from then on you hope to get a little bit better."

Sentinel has gotten plenty of attention for its undefeated run the past two seasons, but West isn’t that far off in terms of dominance.

Those numbers are a combination of the past two seasons. As we all know, each are different teams even if the foundation and some of the major players are the same.

West won 10 straight after losing to the Spartans in that competitive, down-to-the wire Week One game. The Golden Bears have averaged 41.3 points per game behind a loaded offense, and have kept teams to eight per game with a stout defense.

Two dominant teams that haven’t been particularly challenged except by each other and two coaches with immense respect for one another.

"Obviously we want to beat each other," Stanton said. "We respect each other but I think it drives both teams to get to a higher level."

"It's not going to be like some of the games we've played previously. It's going to be a battle. You can run from that challenge or run toward it," Oliver said.

Oh, and another number that stands out: 27. It's been 27 years since Missoula last hosted the AA state title game. That year Missoula Big Sky beat Hellgate in a crosstown battle that ended with the Eagles taking the crown.

Fans should be in for a treat Friday night at Missoula County Stadium.

Crews has thrown for 1,651 yards, 17 touchdowns and three interceptions this season. He has also ran for 808 yards and nine scores, but the running game has been led by junior running back Adam Jones and his 845 yards and 16 rushing scores.

"The ball is going to be in Zac Crews' hand," Stanton said. "He went from a tight end to a quarterback which is difficult to do. ... Their running back Jones is really good too."

Crews has also the unique distinction that he leads Sentinel in tackles for loss at 8.5, which is tied with senior Jack Gibson, as the QB also plays defensive end, where he has committed to play for the University of Montana.

The Dowler twins, Taco and Caden, lead West's passing game as the two Montana State commits are the top receivers on the team at 935 and 667 yards respectively. Claunch has thrown for 2,432 yards, 27 touchdowns and seven interceptions. Michael DeLeon, a senior running back, has rushed for 7.7 yards per carry, 1,568 yards and 16 TDs this season as the feature option in the West backfield.

"They are going to make plays (Friday) night. Can we keep them out of the end zone is the challenge for us," Oliver said.

Defensively, senior linebacker Max Murphy has a team-high 10 tackles for loss this season.

Western Montana is a hotbed for state football finals this weekend.

Just down the road from Missoula in the Bitterroot Valley, top-seeded Class B team Florence hosts No. 3 Bigfork for a western clash for the crown. Up in Thompson Falls, the hosting Blue Hawks take on Flint Creek (Drummond-Philipsburg) for the 8-Man crown. Meanwhile, another Missoula-adjacent team will take on an eastern power when Hamilton heads over to Laurel for the Class A state title game. All three games are on Saturday with 1 p.m. start times.

Sentinel’s Adam Jones (6) is tackled out of bounds during the high school football game between Missoula Sentinel and Billings West at Washington-Grizzly Stadium, Friday, Aug. 27.