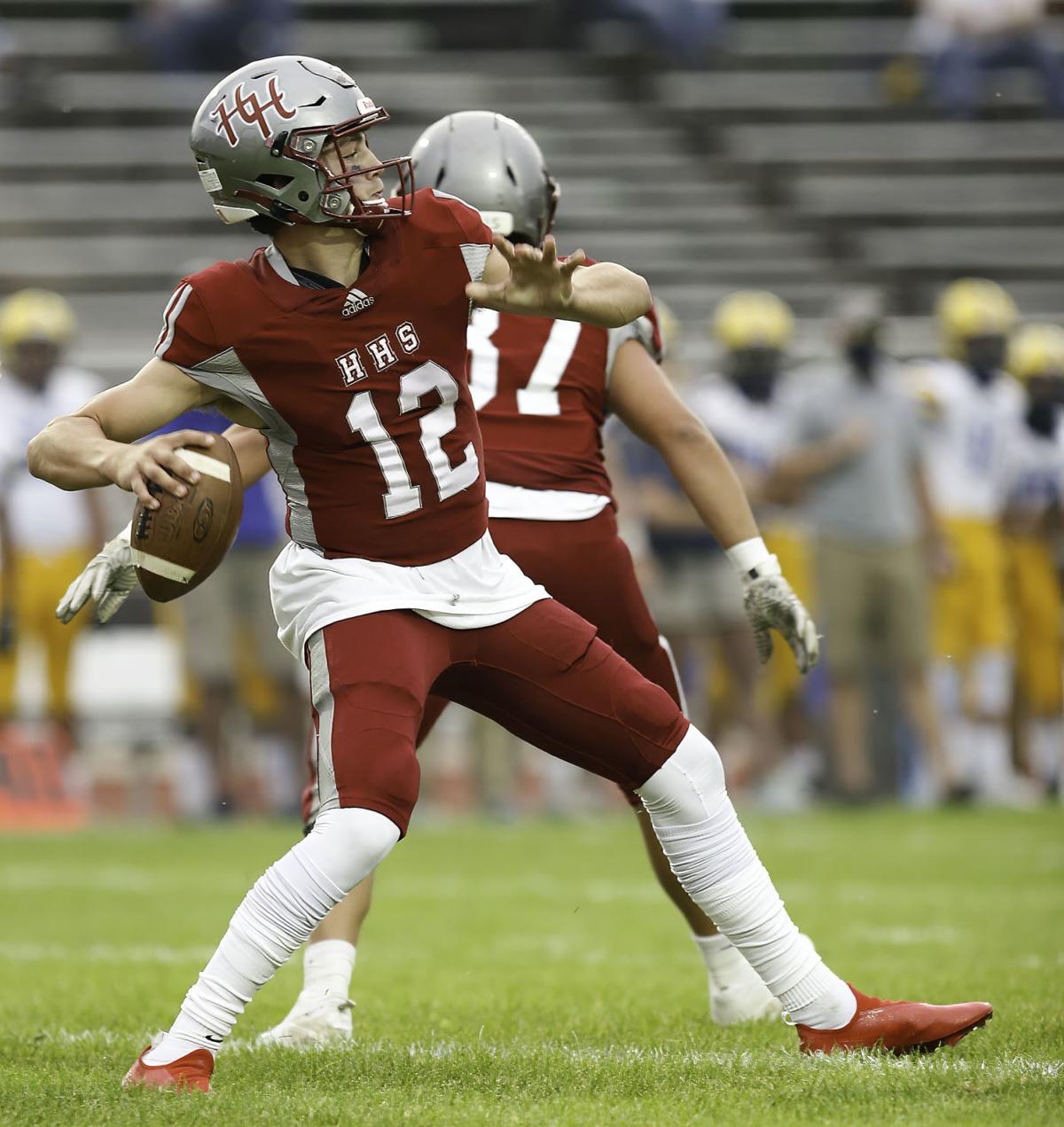 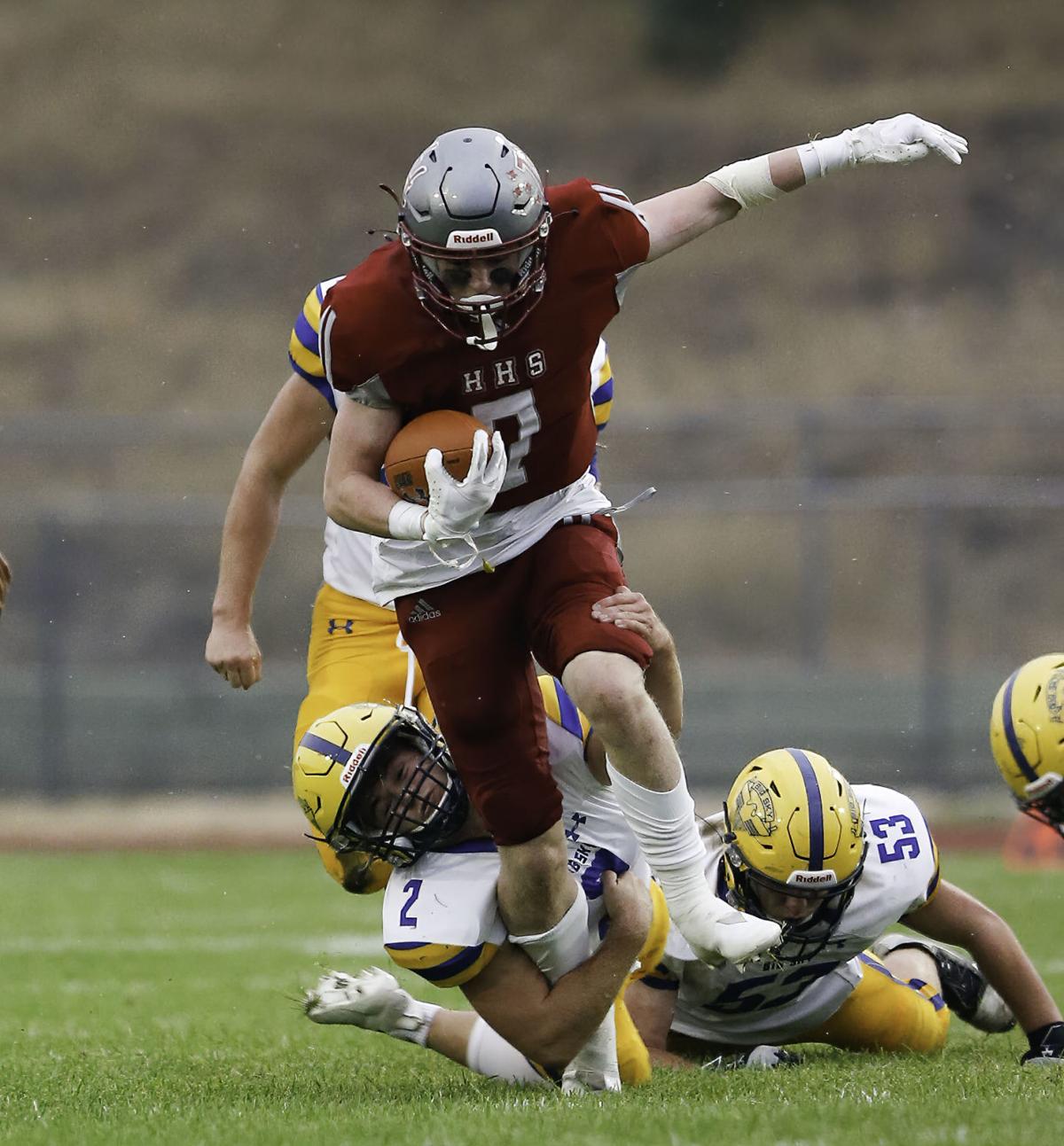 HELENA — It may have taken Helena High quarterback Kaden Huot a week to knock off the rust in the 2020 season.

But if the way he played Friday night in 48-7 win over Missoula Big Sky was any indication, as he tossed a school-record tying five touchdown passes, the rust is gone and it isn't coming back.

"Last week, I had the jitters and I was in my head," Huot said. "I came out a lot more confident, we had a great week of practice and we just took control of the game and had some fun."

After completing 16-of-26 passes for 222 yards and five touchdowns in the first half alone for Helena, Friday night at Vigilante Stadium, Huot wasn't the only Bengal having fun.

"I loved it," Huot said. "But it wasn't just me. It was my receivers. My O-line gave me time in the pocket. It was everybody, a great team experience."

It was a first-time experience for Dexter Tedesco, who prior to Friday night, hadn't scored a touchdown in a varsity game.

Late in the first quarter, with the Bengals up 7-0, Huot avoided pressure and found Tedesco, who then scampered 17 yards for a score to make it 14-0.

"They sent some heat," Huot said. "I had some linebackers right on me, but I was able to find Dexter and he made a nice move to get in the end zone."

Tedesco added two more touchdown receptions in the second quarter, the second of which made it 35-7 Bengals. When the first half was over, the senior wideout had five receptions for 93 yards and three touchdowns.

"I was expecting one, but I kept popping off and it's a great feeling," Tedesco said. "It felt like a Madden game. It was crazy and one of the best experiences I've had."

After Helena built a 14-0 lead after the first quarter, Big Sky answered with a touchdown of its own as Louis Saunders hauled in an 18-yard touchdown reception from Colter Janacaro to make it a one score game with 11:20 left in the first half.

But right on cue, Tedesco hauled in a 51-yard pass, setting up his second touchdown of the night a few plays later.

Following a defensive stop, Helena got the ball back and after a fourth-down conversion from Ethan Maxness, who ran 17 times for 96 yards, Huot found Tedesco again for a score, this time from three yards out. His third TD catch made it 28-7 Bengals midway through the second.

Helena scored on its next two drives as Huot found Chase McGurran for a score and then connected with Kade Schlepp in the final minute of the first half, wrapping up a record-breaking first half for the Helena QB.

"(Kaden) can stretch the field with his arm and that's an asset," Helena high head coach Scott Evans said. "He played a heckuva ballgame."

When it was all said and done, Huot was 18-of-29 for 228 and five touchdowns, as well as one interception. Tedesco also finished with five catches for 93 yards. McGurran also added five for 79 and a score.

"Dexter is a good football player and a competitor," Evans said. "He kind of took it personally last week that he didn't perform up to his level and he went after it. I'm so proud of him and that was a great performance."

On the Big Sky side of things Janacaro was 6-of-10 for 57 yards and a score. He also had an interception, which was grabbed by Helena's David Lowry. The Bengals defense also notched three sacks in the win.

Janacaro who had a huge week rushing against Missoula Hellgate in the opener, was held to minimal rushing yardage Friday night.

"He's one of the best players in the state of Montana," Evans said of Janacaro. "That kid is a tough, hard-nosed kid and for us to contain him, I am proud of our guys for doing that."

Chris is the sports editor and lead preps reporter for the Independent Record and 406mtsports.com. Follow him on Twitter @cmpetey406

Watch Now: A tour of the Montana Pro Rodeo Hall & Wall of Fame

Roundup from football, volleyball, soccer, cross country and golf around Montana on Friday.