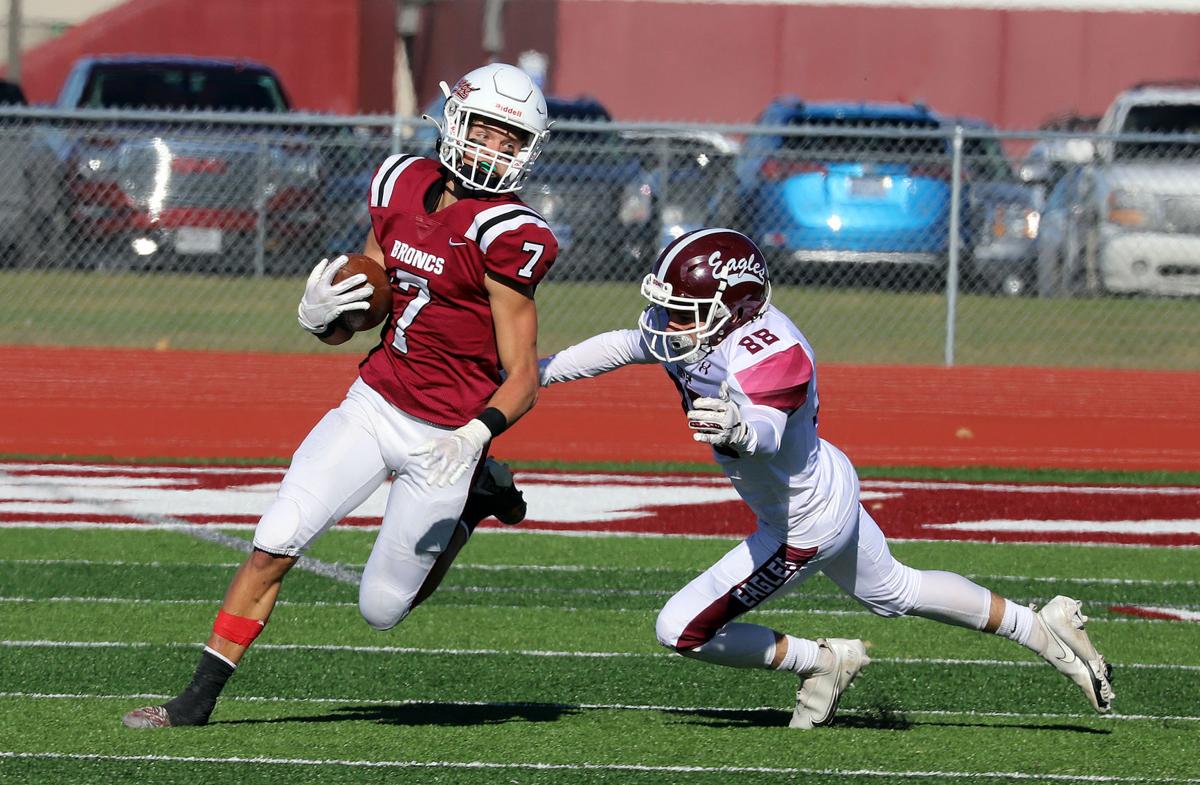 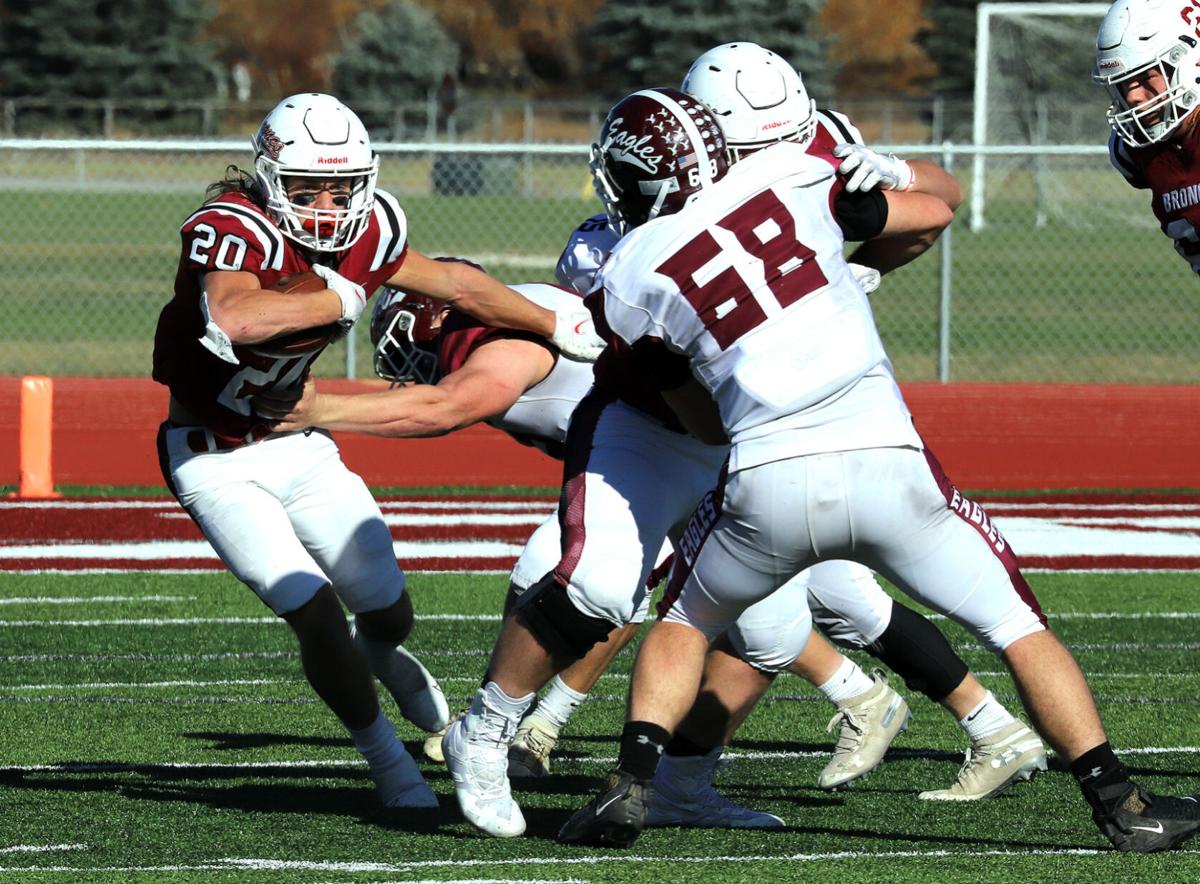 Hamilton running back Ben Tack looks for yards downfield in some tough running against the Sidney Eagles' Riley Jackson Saturday. 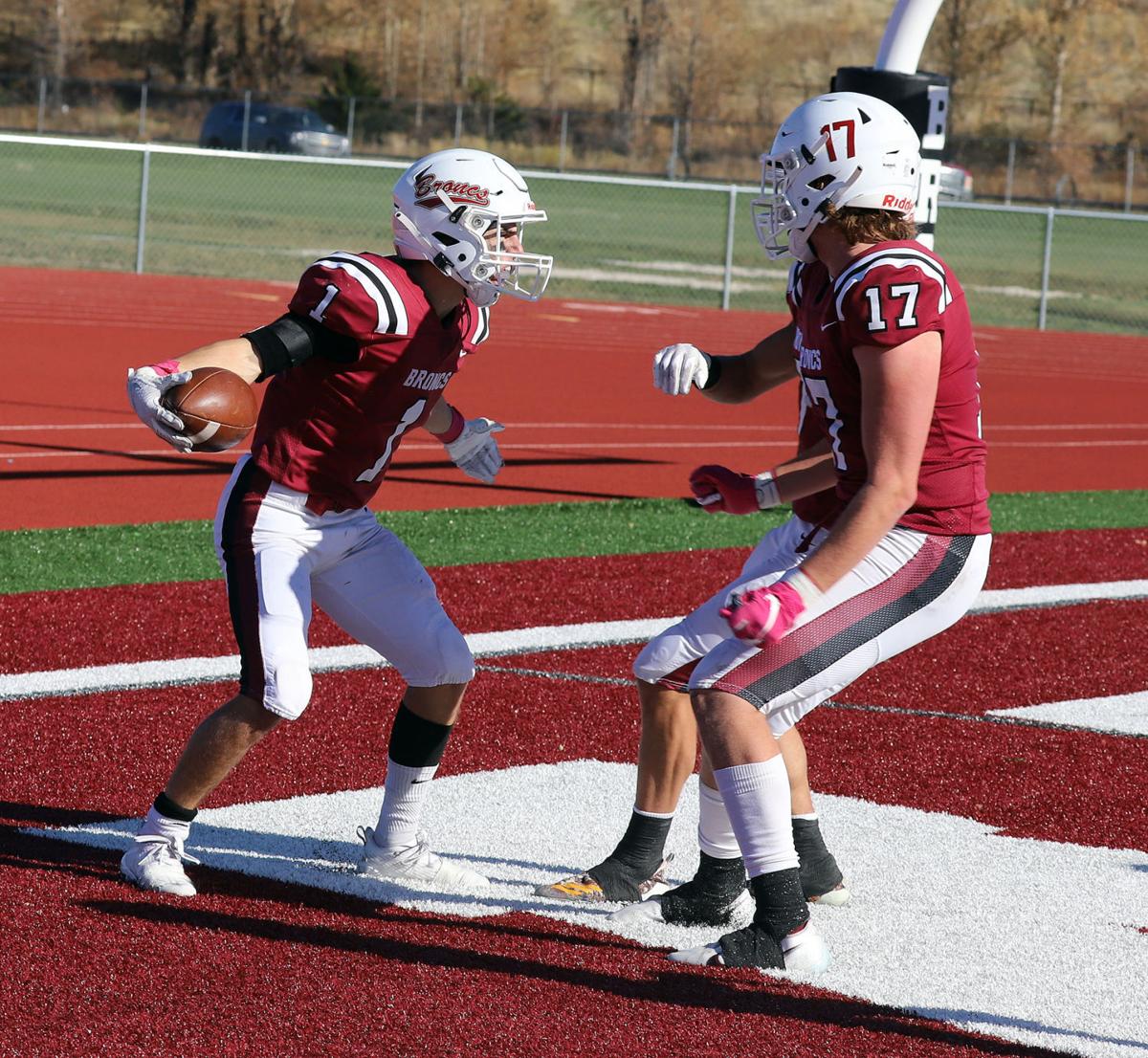 Hamilton running back Ben Rooney celebrates in the end zone with teammate Brandon Nelson after scoring a touchdown in the third quarter of Saturday's game in Hamilton. Rooney racked up 165 rushing yards and an interception in a 24-6 win.

HAMILTON — Surging to the cusp of a Class A football championship has become Hamilton's specialty.

Getting over the hump has been the hard part. But if Saturday's defensive performance is any indication, the top-ranked and undefeated Broncs might just have enough balance on both sides to finally reach the pinnacle.

Hamilton advanced to the semifinal round for the fourth straight year with a 24-6 home win over Sidney in front of a healthy crowd on a sun-splashed afternoon. The Broncs will host Laurel next weekend, with a spot in the title game on the line.

To get to the chipper, Hamilton (10-0) will want to fine-tune a few things offensively. But there's nothing wrong with the team's mental toughness.

What the Broncs lacked in offensive consistency in the first half, they more than made up for on defense. Sidney (4-4) failed to record a first down before halftime and was held to a measly 39 yards in the first two periods combined.

"I like to see that our defense is strong — we're mean, we're tough," Hamilton safety/quarterback Tyson Rostad said. "And I like to be able to see that even if we're struggling certain quarters, struggling in a half, we're not going to shut down. We're going to go hard until there's no time left on the clock.

"It was good to see that even though I think it was 10-0 at half, we came back second half and pounded it."

Rostad and the Broncs took a good punch in the mouth, as coach Bryce Carver likes to say, in the first quarter. Sidney played inspired defense, cracking Hamilton ball carriers so hard that the sound carried to the back row of the bleachers.

Rostad was among those taking a big hit early. He responded by leading his team on a scoring drive late in the first frame that culminated with his 1-yard touchdown dive early in the second. Teammate Austin Drake added a short field goal midway through the second frame but upset-minded Sidney was still very much in the game with a 10-0 halftime deficit.

"It's playoff football and everyone is rarin' to go and everybody is good," Carver noted. "It took us a while to find our rhythm and once we did I thought we did a good job."

Key to the outcome was Hamilton's bend-but-don't-break defense in the third quarter. Twice the Eagles reached the Broncs' 10-yard line, only to have the door slam shut in their face.

"That's really tough to recover from," Sidney coach Roger Merritt said. "The kids bounced back and we still got some drives. We just had some mistakes and it didn't go our way.

"Hamilton has a great coaching staff, great team. They've got some great athletes."

The backbreaker for the Eagles was a 91-yard scoring drive by the hosts to close out the third quarter. Running back Ben Rooney had a big 34-yard run and Rostad a critical 14-yard pass to Liam O'Connell on fourth-and-9. Rooney finished off the drive with a nifty 24-yard touchdown scamper and Drake added the extra point to make the score 17-0.

"We talked about all week that we knew Sidney was a physical football team, tough hard-nosed kids and very well-coached," Carver said. "We knew it was going to be a war today. We held on and kept them out of the end zone for 90 percent of the game."

Sidney finally scored with 10:22 remaining on a Riley Waters 19-yard burst. But Hamilton responded with a 7-minute march capped by Jaiden Klemundt's 16 yard catch-and-run TD reception on a pass by Rostad with 3:44 left.

Sidney never scored again and Rooney, who piled up 165 yards rushing on 17 carries, intercepted a pass in the waning stages that proved to be the final nail in the coffin for the Eagles.

"It's good to know we can just stuff them and get the ball back to our offense," Rostad said. "That's our secret weapon."

The winner of the Hamilton-Laurel game will play the winner of next weekend's Billings Central-Miles City semifinal in the championship game on the weekend of Nov. 13-14. Central reached the semifinals with a 35-8 win over Columbia Falls and Miles City punched its ticket with a 26-21 win at Dillon Saturday.

One of them transferred from Stevensville. The other one came from Wisconsin. Together, they're known as "Ben-squared" and have helped boost the Hamilton football team to the State A semifinals on Saturday.

The Locomotives won in Hamilton to advance to their second-straight Class A football championship.

Pairings and results for the 2020 Class A football playoffs.

When Missoula Sentinel and Billings West clash in the State AA football title game Friday, there will be some Cat-Griz flavor as the Spartans have three Montana commits and the Golden Bears have a pair of Montana State commits.

Hamilton running back Ben Tack looks for yards downfield in some tough running against the Sidney Eagles' Riley Jackson Saturday.

Hamilton running back Ben Rooney celebrates in the end zone with teammate Brandon Nelson after scoring a touchdown in the third quarter of Saturday's game in Hamilton. Rooney racked up 165 rushing yards and an interception in a 24-6 win.