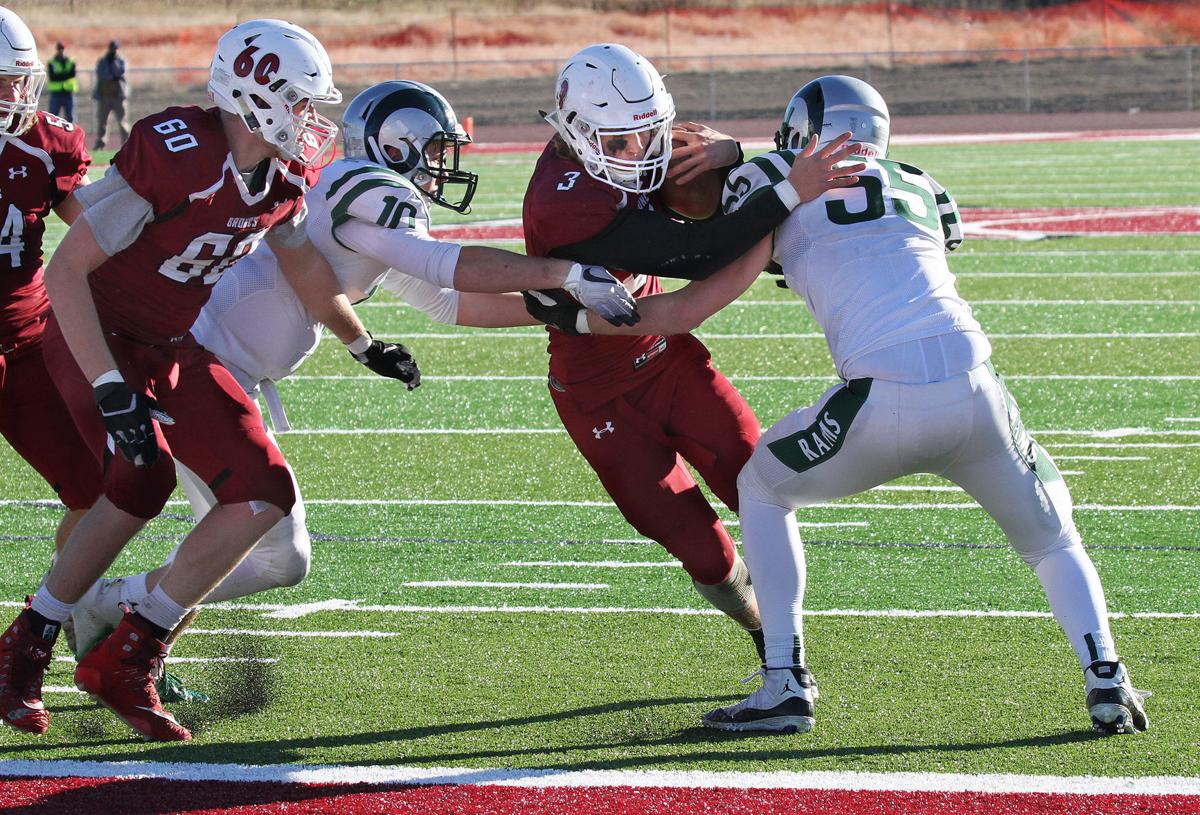 Hamilton quarterback Carson Rostad squeezes between Billings Central defenders Sam Gray and Mason Yochum to score a touchdown last year in the Class A state title game. To go along with his 2,130 yard passing this season, Rostad has also run for 714 yards — second on the team to Landon Duce's 1,174 yards on the ground. 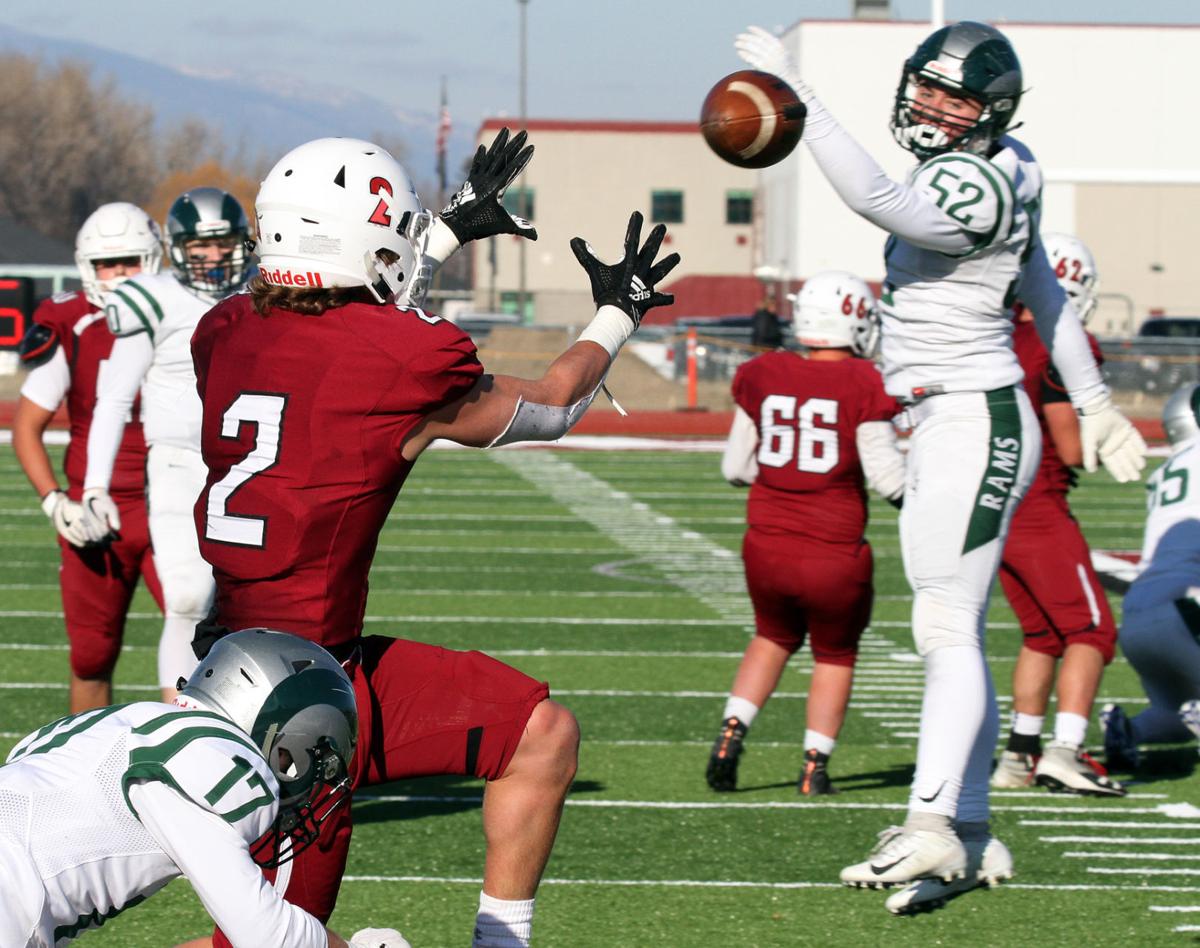 Hamilton's Tucker Jones prepares to catch the team's first touchdown at the Class A state championship game last season as Billings Central defender Brennen Bruce watches it sail by. The Broncs host the Rams for a rematch Saturday at 1 p.m. in the Class A quarterfinals.

HAMILTON — Film study during Hamilton's bye week through the first round of the Class A football playoffs focused on Billings Central, even though the Rams still hadn't yet topped Glendive to advance to the quarterfinals, 45-13.

And why not? Billings Central, the defending state champs and the East's No. 3 seed, was the heavy favorite at home against the Red Devils. The Rams, of course, are also the defending Class A champion.

Hamilton needs no reminder — Billings Central's 2018 coronation came on Hamilton's home field last season, after all. But Broncs head coach Bryce Carver said the mantra during his team's two weeks of preparation for a home rematch with the Rams Saturday at 1 p.m. in the State A quarterfinals wasn't about coming back with a win for last season's team.

It's about winning this year for its own sake.

"...I don't want this all to be about a redemption game," Carver said Thursday at practice. "Last year was last year, it's over and we learned from it. I kind of just want us to enjoy the success we've had going on this year. It's a new year, a new game and we're going to go do what we do."

Hamilton moves the ball well — and not just through the air. Montana football's reigning Gatorade Player of the Year, Carson Rostad, has again been impressive throwing the ball, but the senior has also had an effective year running the ball.

Along with his 2,130 yards in the air, he's rushed for 714 yards — the most he's had in a single season the last three years (team stats from Rostad's freshman year were not available on maxpreps.com).

"I feel like we kind of started going toward that at the end of the year last year, realizing I need to do more with my legs and be more of a dual threat," Rostad said.

Dual threat. It's what you could call Hamilton's offense, after all, Rostad is second on the team in rushing yards. Leading the charge on the ground is first-year starting running back Landon Duce, who has waited in the wings behind a stable of 1,000-yard rushers who have since graduated.

Duce ran for 216 yards against the Loggers.

"He had 200-some yards against Libby and no touchdowns and I told him, 'Hey, I'm sorry,'" a chuckling coach Carver said he told Duce. "But he's just a team-first guy and only cares about winning and I think that's what's made him be so successful."

For what it's worth, Carver called some run plays at the goal line for Duce in Hamilton's regular-season finale against Polson. Duce scored three touchdowns as the Broncs beat the Pirates, 57-18 to finish the regular season at 8-1 overall.

What the game against Libby and Polson showed in particular is that Hamilton is comitted to the run. In fact, the Broncs actually out-gain the possession-minded Rams on the ground this season, 2,123 yards to 1,686.

That's a big difference from last year, when Billings Central finished the 2018 season with 4,114 yards rushing, largely predicated on the three-headed monster of Duncan Craft, Jack Studer and Joe Byorth.

Those three — and 12 others — graduated after last season's title run.

But Billings Central has built its 7-2 record this season largely with the same recipe as a year ago — ball control and solid defense. In its six wins (not including its forfeit win against Livingston), the Rams are outscoring opponents 216-42. Quarterback Marcus Wittman has thrown just one interception, while the Rams' defense has picked off opponents 14 times.

The Rams force teams into mistakes and they maintain possession when its their turn to score.

"They do things defensively that other teams don't do and they do it well," Carver said. "They run a 3-3 stack and Cover 2 and have a guy roaming around. They've got great schemes and it's hard for people to pick up what they're doing, and then they're just physical.

"...When you have a good program and you've been successful with the guys that are coming up, they're still going to be successful. That's what I see in this Billings team. They're a lot better than maybe some people are giving them credit for."

That said, the Rams have big losses to Laurel (33-0) and Miles City (41-10) on its ledger this season. What were the East's top teams able to do against the defending champs so effectively?

"I think the biggest thing was they had some penalties and turnovers and when they get behind the sticks, you have to rely on more (big plays)," Carver said. "...When they're behind and they can't hold that ball and keep it away from people I think it plays into the other team's advantage, too.

"Last year in the state title game I think we had the ball for 12 minutes and we lose by seven," Carver said. "We have to take advantage when we have the ball, because if not, they're going to hold it and we're not going to see it much.

"We need to get first downs."

That starts with staying on schedule in Hamilton's early downs.

And with a potent running attack paced by Duce and Rostad, the recipe could be right for redemption.

Even if that's not what Saturday's quarterfinal game is all about.

HAMILTON — It was a 23-yard Rostad pass on fourth down that sparked Hamilton's first score of the second half and paved the way to the Broncs' 34-17 Class A quarterfinal win against Billings Central.

Hamilton quarterback Carson Rostad squeezes between Billings Central defenders Sam Gray and Mason Yochum to score a touchdown last year in the Class A state title game. To go along with his 2,130 yard passing this season, Rostad has also run for 714 yards — second on the team to Landon Duce's 1,174 yards on the ground.

Hamilton's Tucker Jones prepares to catch the team's first touchdown at the Class A state championship game last season as Billings Central defender Brennen Bruce watches it sail by. The Broncs host the Rams for a rematch Saturday at 1 p.m. in the Class A quarterfinals.