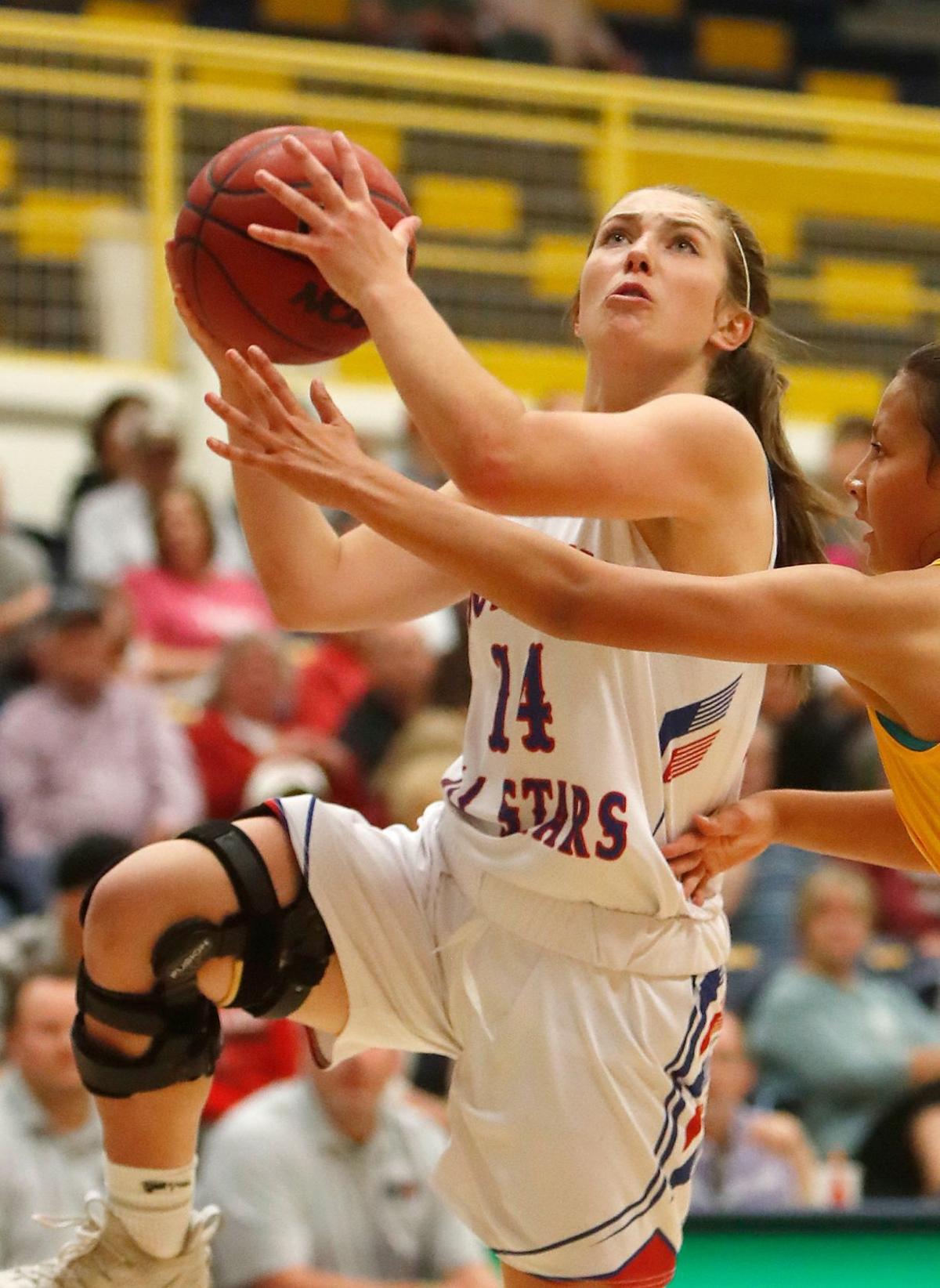 Montana's Danielle Zahn of Florence drives to the basket during Friday's game against Wyoming at Alterowitz Gymnasium. Zahn scored 10 points, all in the second half, to help Montana to an 84-66 victory. 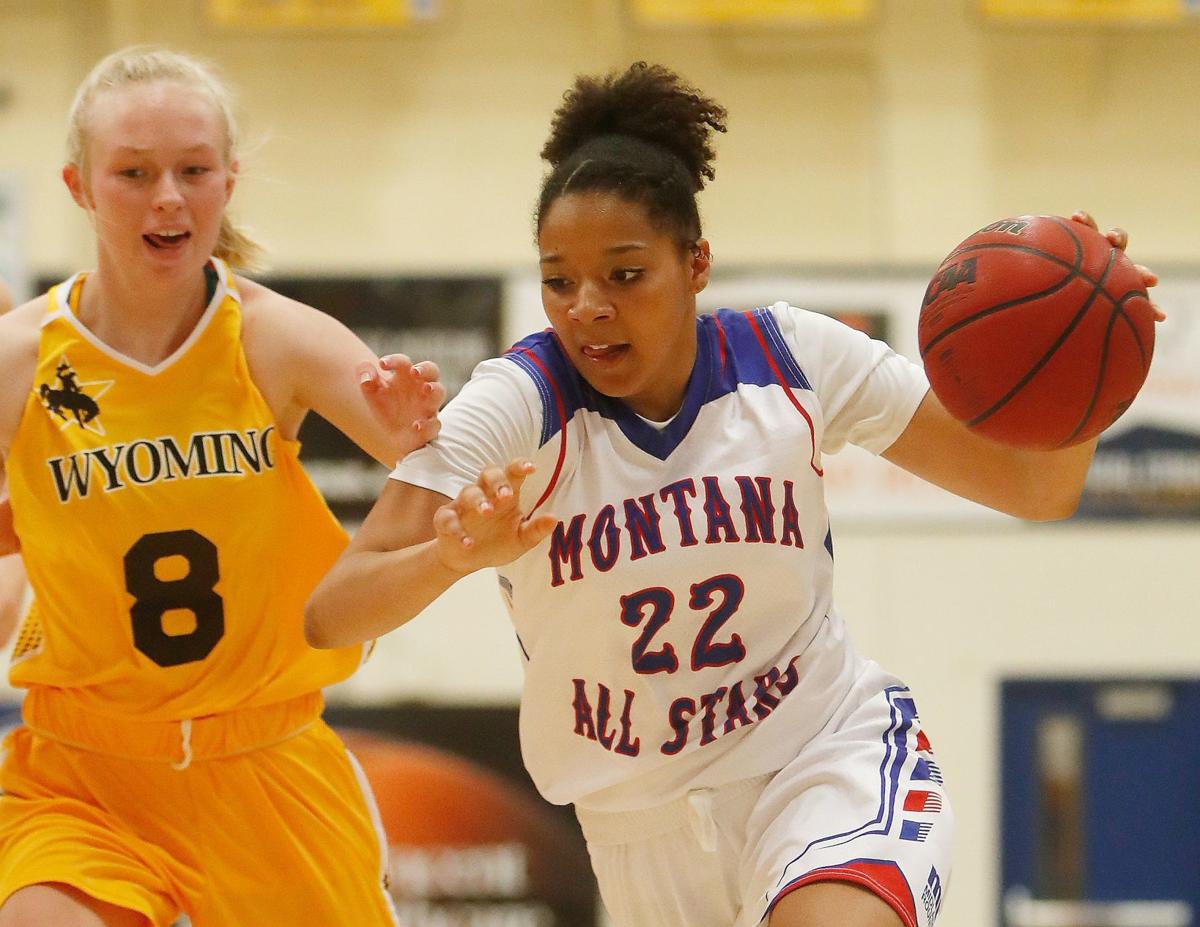 Montana's TyRaa Manuel of Billings West dribbles the ball in the first quarter of Friday's game against Wyoming at Alterowitz Gymnasium.

BILLINGS — Danielle Zahn got an early glimpse of her new home and a look at her future college basketball teammates.

The Florence product and Montana State Billings basketball signee liked what she saw, too.

One of five future Yellowjackets who started for Montana Friday night in the Midland Roundtable All-Star basketball series against Wyoming, Zahn helped the Treasure State extend its six-game winning streak with an 84-66 victory over Wyoming at MSUB's Alterowitz Gymnasium.

Zahn, along with Billings West’s Shayla Montague, TyLee and TyRaa Manuel, and Kalispell Glacier’s Kali Gulick, comprised the starting five for Montana coach Wes Keller. He separated his 10 players into two units and subbed a full group at a time.

While it might seem convenient to have the five MSUB recruits play on the same unit, Keller, who coaches the women’s basketball team at Rocky Mountain College, said there was more to it than that.

“When you look at your all-star team and see what you’ve got, by position it just kind of worked out that way and we decided to go with it,” he said.

Whatever the reason, Zahn was grateful for the opportunity to get the early court time with her future Jackets. It was also the first time a girls game in the series was held on the MSUB campus.

Montana's MSUB contingent provided an 11-0 run after Miller hit a 3-pointer to start the second half to get her team within four. By the time Montana’s other five-player group added a 13-6 run, the Treasure State had a 63-41 lead, which would be the biggest of the game.

“I think that was pretty deflating for our girls, that (11-0) run,” said Wyoming coach Ryan Davis, who also coaches at Sheridan College. “Took us a minute or two or three to get out of that lull, that first punch they gave us. But I really thought our girls did play hard.”

Davis said there are a couple things he needs to tweak when the series switches to Sheridan, Wyoming, Saturday night. Likely a bigger factor, though, will be his team’s depth. For a variety of reasons, the Wyoming roster has just eight players this year instead of the usual 10.

“Yeah, that’s tough, but it is what it is,” he said. “We just have to move forward and see what we can do.”

Zahn was the energizer for the Montana crew. The 5-foot-5 guard always looked to push the ball up the floor and was constantly high-fiving and encouraging teammates. She scored all 10 of her points in the second half as she began to exert herself and her style of play.

“I feel like if you seclude yourself from the team, I don’t think it’s very team-worthy, you know what I mean?” she said. “I think it’s very important to be a great teammate as well as a great leader. And, I’m just having fun.”

“(Saturday) it’s going to be even more important that we set the tone early,” Keller said. “Take care of the basketball … you know, they’re physical and they played hard, they’re a very good basketball team. I told our ladies enjoy it tonight and then tomorrow you’re going to have a battle on your hands and you better be ready to go.”

Congratulations to Sentinel's Lexi Deden on earning the Missoulian's athlete of the year award for girls basketball.

Montana's Danielle Zahn of Florence drives to the basket during Friday's game against Wyoming at Alterowitz Gymnasium. Zahn scored 10 points, all in the second half, to help Montana to an 84-66 victory.

Montana's TyRaa Manuel of Billings West dribbles the ball in the first quarter of Friday's game against Wyoming at Alterowitz Gymnasium.