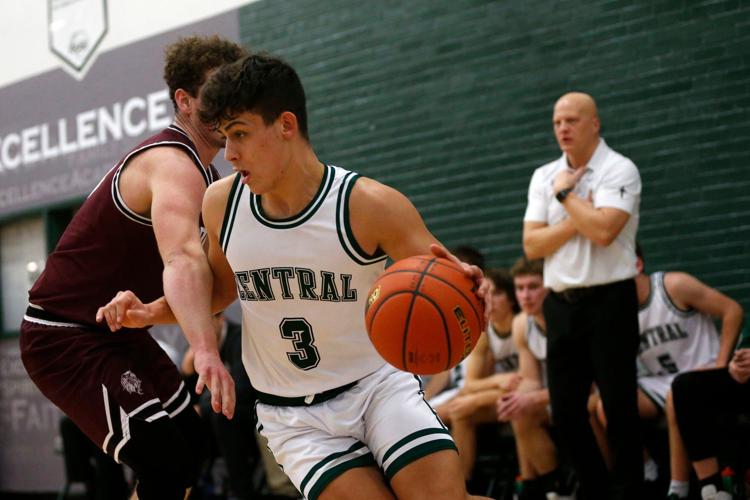 Billings Central’s Jaden Sanchez goes baseline on a Sidney defender during their boys basketball game Friday at the Nelles Activities Center. The Rams won the contest 72-37. 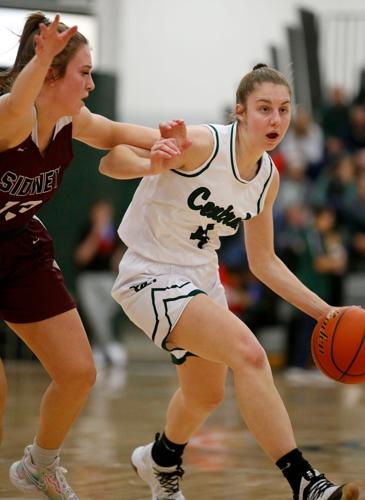 Billings Central’s Mya Hansen dribbles into the paint against Sidney in girls basketball on Friday at the Nelles Activities Center. The Rams won 70-35.

Editor's note: Games will be reported as we receive them.

• Butte 65, Kalispell Flathead 59: The game was tied 57-57 with one minute remaining when Butte's Kooper Klobucar's 3-pointer broke the deadlock. The Bulldogs went on to outscore the Braves 8-2 in the final 60 seconds to pick up the victory. Klobucar scored 14 points for Butte. Jace Stenson led the Bulldogs with 19. Joston Cripe had 16 for the Braves, while Gavin Chouinard and Joseph Hansen each had 12.

• Laurel 56, Lockwood 46: Dalton Boehler scored 14 points and two others reached double figures to help the Locomotives hold off the Lions. Konnor Gregerson added 13 and Kyson Moran had 11 for Laurel. Lockwood was led by Jaiden Bigman’s 19 points.

• Colstrip 62, Forsyth 14: Colstrip had no trouble with Forsyth, as Weston Means and Seth Stevenson led the way. Means scored 18 points while Stevenson added 17. The Colts led 37-6 at halftime.

• St. Ignatius 73, Arlee 56: Three scored in double figures for St. Ignatius, led by Zoran LaFrombois outburst of 35 points. Kellen McClure added 20 and Cederick McDonald had 10 for the Bulldogs. Arlee was led by Levi Fullerton, who had 19. Benny Harlow added 13 for the Warriors.

• Harlem 74, Chinook 67: R.J. Ramone scored a game-high 26 in the Wildcats' victory at home over the Sugarbeeters. He drilled four 3-pointers and was one of four Harlem players to score in double figures. The others: Teagan LeValdo 14, Tyler Cichosz 12 and Marley Stewart 10. Oskor Pula scored 18 for Chinook, while Jackson Nordbor had 17. Harlem led 49-24 at half and 67-44 heading into the fourth quarter.

• Shields Valley 66, Sheridan 33: Dylan Flatt and Kaden Acosta led Shields Valley as the Rebels doubled up Sheridan. Flatt poured in 25 points and Acosta added 17 for Shields Valley, which was ahead 34-19 at halftime.

• West Yellowstone 44, Ennis 41: West Yellowstone outscored Ennis 26-11 in the fourth quarter to complete a comeback victory. Zach Gould had 17 points for West Yellowstone, going 10 for 10 from the foul line in the final eight minutes. Andrew Beardsley had 11 points and Clinton Buyan had 10 for Ennis.

• Manhattan Christian 57, Townsend 35: Junior Seth Amunrud highlighted the Eagles' win over the Bulldogs by piling up 22 points. Senior teammate Jackson Leep also scored points in double figures with 11. Manhattan Christian started quickly in leading 14-4 after one quarter and 29-14 by intermission. Amunrud tallied his 22 points on 8-of-10 shooting. Ryan Racht scored 11 points for Townsend.

• Roberts 35, Reed Point-Rapelje 32: Roberts only scored three points in the fourth quarter but it was just enough to lead the Rockets over the Renegades. Joe Allen led Roberts with 13 points. Blade Blodgett's 18 points paced Reed Point-Rapelje.

• Circle 50, Culbertson 43: Beau Beery's 27 points was a catalyst in Circle's victory. Beery shot 10 of 21 from the floor and hit three 3-pointers. Seth Dyk added 10 for the Wildcats. Maurice Bighorn had 15 points to lead Culbertson. Teammates Payton Perkins and Colin Avance each had 10.

• Valier 44, Simms 40: Cam Stoltz knocked down six 3-pointers on his way to 25 points in the win at home by Valier. He didn't score in the first quarter and had five of his 3-pointers in the second half. Valier trailed 31-22 after three, but went on a 22-9 scoring spree to pull the game out. Stoltz scored 14 of those 22 points. Carter McDowell led Simms with 27 points, shooting 8 of 12 at the foul line.

• Drummond 65, Seeley-Swan 55: Chase Goldade had 19 points and Trey Phillips added 14 for Drummond. Colt Parsons chipped in 11 points for the Trojans. Seeley-Swan was led by Walker McDonald's 18 points. Chase Haines scored 12 for the Blackhawks.

• Kalispell Flathead 50, Butte 44: Clare Converse's 16 points were key in Flathead's six-point win over Butte. The Bravettes' Maddy Moy added 14 points, 11 of which came in the second half. Butte was led by Ashley Olson, who had 11 points. Tylar Clary scored 10 for the Bulldogs.

• Colstrip 67, Forsyth 37: Malea Egan pumped in 26 points and the Fillies used a 22-point first quarter to walk away with the win. Bailey Egan added 12 points for the Fillies. Becky Melcher led Forsyth with 21 points.

• Choteau 53, Shelby 45: The Bulldogs earned their victory by winning the first and fourth quarters. Both teams scored 26 points in the second and third quarters, but Choteau held a 27-19 advantage in the first and fourth. Ada Bieler led the way for Choteau with 13 points and Kylie Kovatch added 11. Shelby’s Jori Clary led all scorers with 19 points, while Cameron Blevins added 14.

• Baker 54, Wolf Point 49: Nine players scored for the Spartans, who limited Wolf Point to just three points in the third quarter to build a 16-point lead. Eve Ueker paved the way for Baker with 11 points.

• Big Timber 66, Joliet 32: The defending Class B champion Sheepherders had a strong second half to pull away from the J-Hawks. Bailey Finn led the way for Big Timber with 22 points and Emily Cooley followed with 19 and Kameryn Ketcham had 13. Peyton Whitehead led Joliet with nine points. Big Timber outscored Joliet 40-19 in the second half.

• Three Forks 39, Manhattan 27: Jayden Woodland led the way with 12 points as Three Forks won at home against Manhattan. AshLyn Swenson and Jasmyn Murphy contributed seven points apiece in the Wolves' balanced attack. Three Forks was up 11-4 after one quarter and 22-14 by halftime. Gracie Millimen scored eight points for Manhattan.

• Plentywood 56, Froid-Lake 21: Emma Bresndal put in 21 points and Montana Tech signee Liv Wangerin added 17 to help the Wildcats to victory. Plentywood raced to a 27-2 lead after the first quarter and expanded its lead from there. Baylee Davidson led Froid-Lake with nine points.

• Park City 33, Harlowton 19: Kendyll Story and Isabelle Adams combined for 25 of the Panthers’ points in the win. Story finished with 13 and Adams 12. Gracie Anderson scored nine points to lead the Engineers.

• Roberts 34, Reed Point-Rapelje 31: After seeing a six-point first-quarter lead slip away, the Rockets rallied behind 17 points from Hailey Croft. The Renegades managed to take 26-24 lead after the third quarter, but Roberts outscored RP-R 10-5 in the fourth. Lily Herzog led the Renegades with 20 points.

• Twin Bridges 56, Whitehall 39: The Falcons shook off the Trojans over the final three quarters after Twin Bridges led 12-11 after the first. Allie Dale scored 23 points and Kyle Pancost added 14 to lead the Falcons.

• Geraldine-Highwood 43, Denton-Geyser-Stanford 19: The Rivals didn’t allow more than six points in any quarter in getting the victory. Ellie Aron had 10 points for Geraldine-Highwood, while Kara Reed had six to lead D-G-S.

• Belt 63, Winnett-Grass Range 21: Raily Gliko accounted for 20 points for the Huskies, who were playing at home. Lindsey Paulson and Hattie Bumgarner provided a helping hand with 13 points apiece. It was 20-5, Belt's favor, after one quarter. Zurry Moore and Shani Browning had five points apiece for WGR.

• Chinook 58, Harlem 32: Four Sugarbeeters were in double figures in their win over Harlem. Alexus Seymour and Bree Swanson scored 13 points apiece, and Allison Powell and Britton Elliot both had 11 for Chinook, which led 25-8 at halftime.

• Power 38, Dutton-Brady 29: Amara Bodkins made six 3-pointers on her way to 20 points to help lift Power to the victory. Chloe Sealey finished with 10 points to lead Dutton-Brady.

• Simms 59, Valier 46: Taylee Sawyer, Laura Zietzke and Kodiann Lynn combined for 40 points for the winning and visiting Tigers. Sawyer scored 16 points, followed by Zietzke and Lynn with 12 apiece. Simms led 37-20 by intermission. Emma Valdez had 20 points for Valier. Loni Orcutt chipped in with 17, including five 3s.

• Charlo 37, Plains 17: Hayleigh Smith scored 11 points and Mila Hawk had 10 to help the Vikings pull away from the Trotters. Charlo led 10-7 after the first quarter.

For all your basketball box scores from around the state, go to 406mtsports.myteamscoop.com.

Highlights and top scorers from the opening night of basketball action.

The Bigfork Vikings and Valkyries will be testing new waters next year after a successful run in Class B.

RAW: WORLD CUP: AMERICAN FANS IN QATAR REACT TO THE NETHERLANDS VICTORY OVER US

Behind the Scenes - At the World Cup media hub

Behind the Scenes - At the World Cup media hub

Tunisia our inspiration says USA captain ahead of Netherlands match

Tunisia our inspiration says USA captain ahead of Netherlands match

Billings Central’s Jaden Sanchez goes baseline on a Sidney defender during their boys basketball game Friday at the Nelles Activities Center. The Rams won the contest 72-37.

Billings Central’s Mya Hansen dribbles into the paint against Sidney in girls basketball on Friday at the Nelles Activities Center. The Rams won 70-35.