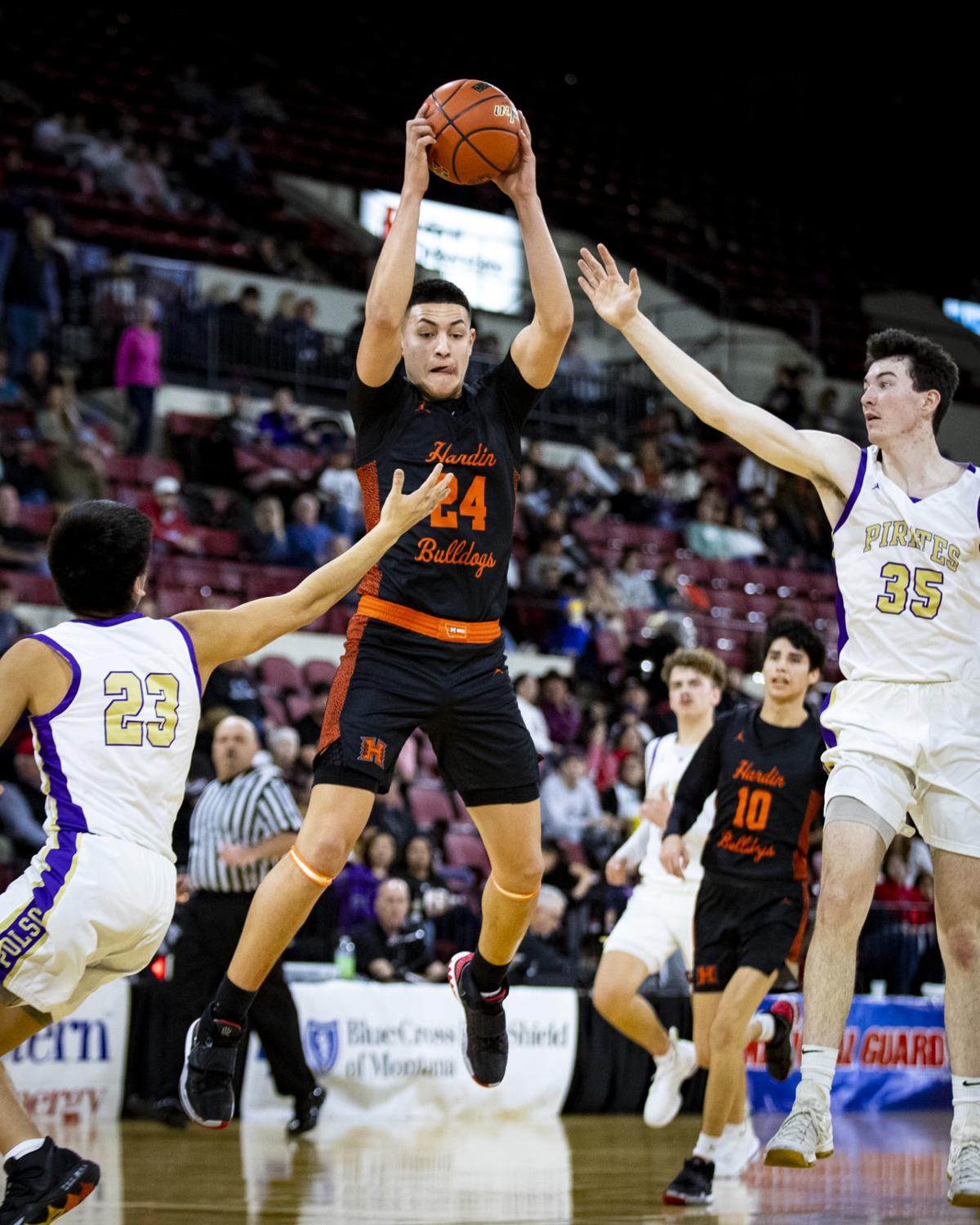 Hardin's Cayden Redfield goes up to grab a long pass during the Bulldogs' game against the Polson Pirates in the first round of the Class A state boys basketball tournament at First Interstate Arena at MetraPark on Thursday. 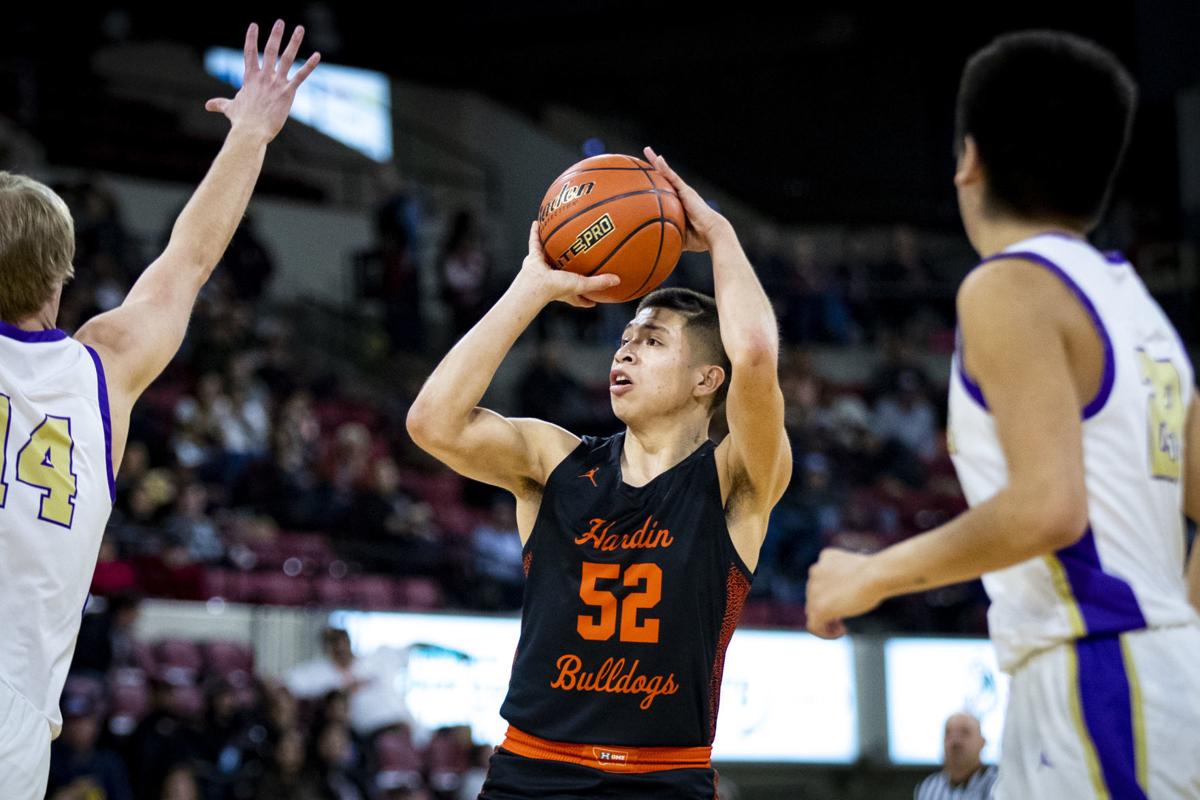 Hardin's Famous Lefthand shoots during the Bulldogs' game against the Polson Pirates in the first round of the Class A state boys basketball tournament at First Interstate Arena at MetraPark on Thursday. 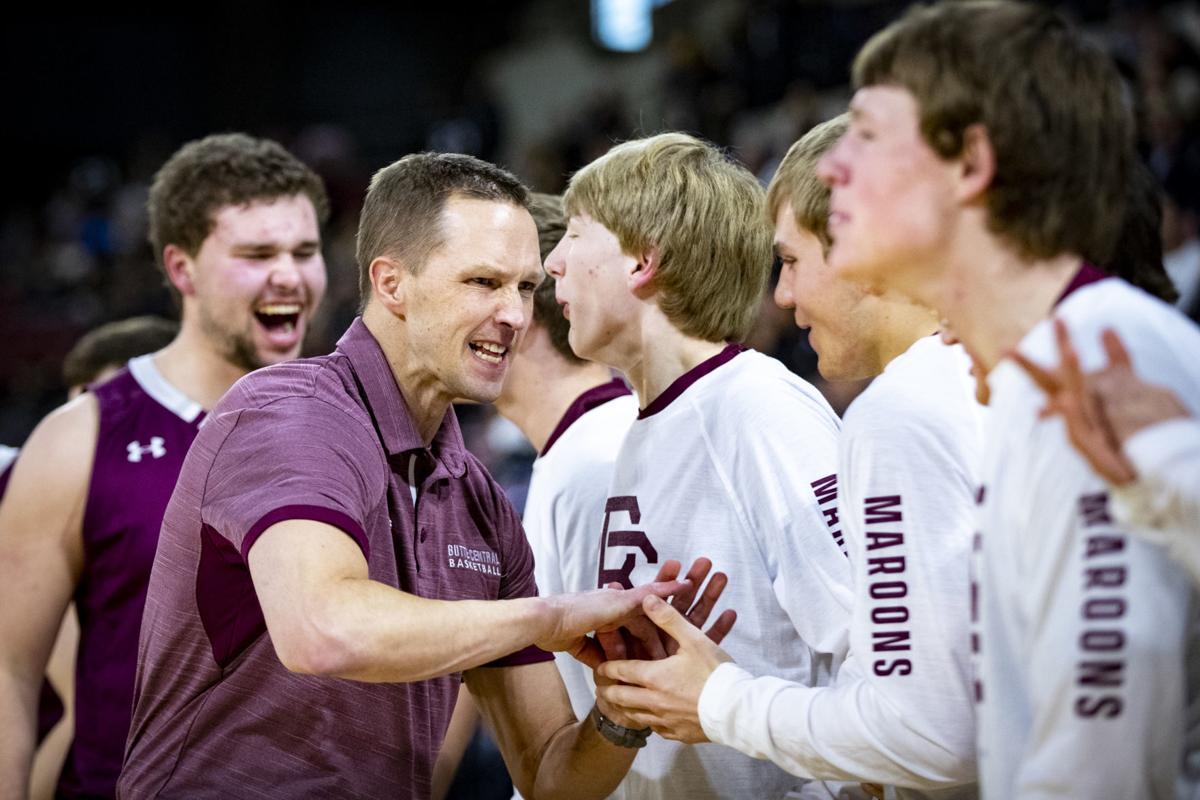 Butte Central coach Brodie Kelly celebrates with his team with two seconds left in the Maroons' game against Billings Central in the first round of the Class A state tournament at First Interstate Arena at MetraPark on Thursday, March 12, 2020.

BILLINGS — In a game that stayed within five points throughout, Livingston prevailed 42-39 over Frenchtown to advance to the Class A state boys basketball semifinals Thursday morning at First Interstate Arena at MetraPark.

The Rangers move on to the semifinals. Here’s how it ended. #MTscores pic.twitter.com/KCTnOfFRkI

Livingston senior Brendon Johnson led all players with 21 points and 13 rebounds. He shot 8 of 23 from the field and 0 of 7 from 3-point range but went 5 of 5 from the free-throw line, including two foul shots in the final minute to make the score 42-39 in the first-round game. Johnson also hit the go-ahead layup with 1:45 left following a steal from junior Tristan Stenseth.

"We locked down on defense. That's our biggest focus: defense, defense, defense," said Livingston senior Jack Gauthier. "When we got up, I was like, 'We got this. Play smart, play hard.' And we did. We came out with the win."

Gauthier finished with nine points on perfect shooting (4 of 4 from the field, 1 of 1 from the line). His and-1 with 3:41 left gave Livingston a 38-37 lead, its first since midway through the third quarter.

"It was definitely a momentum shift. Those will always get me hyped up," Gauthier said. "Just executing my goal, like crashing offensive offensive boards, focusing on finishing every layup I have, playing the best game that I can."

Livingston’s Wyatt Saile banked in this 3 right before the quarter ended. #MTscores pic.twitter.com/oXPXZ38xmc

The score was 7-7 after one quarter, and Frenchtown carried a 15-14 lead into halftime.

Sophomore Devin Shelton led Frenchtown with 14 points (7 of 8 from the field), while seniors Hank Rugg (4 of 8, six rebounds) and Cade Baker (3 of 10, four assists) each scored eight.

Livingston will face top-ranked Hardin in the semifinals at 3:30 p.m. Friday back at Metra. Frenchtown will play a loser-out game against Polson at 9 that morning.

The Rangers have won 11 of their last 12 games, and their last two losses have both come against Hardin. Livingston lost on a buzzer-beater in their first game against the Bulldogs on Dec. 21.

"Our goal is a state championship," Gauthier said. "Just focusing on playing our best."

The top-ranked Bulldogs rolled to the State A semifinals for the third straight season.

The Bulldogs (22-0) forced 27 turnovers while giving away nine. Polson led 11-9 in the first quarter but was outscored 29-6 the rest of the first half. Hardin also outscored the Pirates 28-9 in the third quarter of the first-round game.

Hardin’s Famous Lefthand scores the last points on this and all-1. pic.twitter.com/OWw2K95mxg

Sophomore Braunson Henriksen led Polson (13-10) with 11 points. The Pirates will face Frenchtown in a loser-out game at 9 a.m. Friday back at Metra.

Hardin will face Livingston at 3:30 p.m. Friday. The semifinal matchup will be the fourth between the Bulldogs and Rangers this season. A Famous Lefthand buzzer-beating 3-pointer gave Hardin a 61-60 win over Livingston on Dec. 21, and the Bulldogs won 70-60 on Jan. 25 and 67-33 on Feb. 28 in the Eastern A Divisional semis.

"We know who they are. We know who we have to watch. We know what they're gonna run. The disadvantage is, they know us, too. It's a double-edged sword," said Hardin coach Andrew Round Face. "It should be a good game. Hoping it's not gonna be that good of a game."

"Everyone knew who our team was. Our team was stacked," Three Irons said, referring to preseason expectations. "Just two more games."

A 21-point effort from senior Braden Harrington and a 14-5 fourth quarter helped the No. 2-ranked Maroons knock off the defending state champion Rams in the first round.

Harrington was crucial in keeping Butte Central afloat, scoring nine of his 12 first-half points in the second quarter.

“We called a timeout with like five minutes left in the second quarter. (Maroons coach Brodie Kelly) was like, ‘Somebody needs to step up,’” Harrington said. “I was like, ‘I don’t want my season to end like this,’ so I just had to go out and (step up).”

A 10-0 run turned a 41-36 deficit into a 46-41 lead for Butte Central with about five minutes to go. The Rams had several chances to tie in the final minutes, but the Maroons held on thanks to solid defense, favorable whistles and some missed opportunities from the Rams.

This was the Rams last gasp with 2!seconds remaining. pic.twitter.com/7vaCSVIzYe

“There are only two teams that come out of the state tournament with a win, and that’s first and third,” Stergar said. “We have to turn the page quick.”

No. 5-ranked Billings Central got eight points apiece from juniors Junior Brackenridge (3 of 5 on field goals), Malachi Stewart (4 of 6) and Marcus Wittman (2 of 3).

Butte Central will face Browning in the semifinals at 5 p.m. Friday, while Billings Central will play a loser-out game against Eastern A rival Laurel at 10:30 that morning. Both games will be played at Metra.

The Maroons lost to Hardin 79-73 in last year’s state semis and went on to take third place.

“It feels pretty good, but it can’t last very long,” Harrington said. “We’ve just gotta be happy that we made it to the semis again, but now we need to get ready for another team.”

A near-triple-double from senior Riley Spoonhunter propelled the Indians into the state semifinals for the second time in three seasons.

Spoonhunter finished with 19 points, 12 assists and eight rebounds while shooting 5 of 11 from the field.

Riley Spoonhunter scores three of his game-high 12 points on this shot. pic.twitter.com/NNw4HgGsTw

Browning, which lost to Hardin 69-59 in the first round a season ago, led 20-12 through one quarter, 38-27 at halftime and 60-38 through three quarters. Defense and pushing the pace were the Indians’ biggest keys, Spoonhunter said.

“We knew we were gonna run these guys out of the gym,” he said.

Junior Eli Aby led the Locomotives with 12 points (4 of 11) and grabbed six rebounds, senior Danner Purkett had 10 points (4 of 7) and eight boards and sophomore Emmet Renner (2 of 5) and junior Wylee Schnetter (3 of 8) each scored nine.

The Western A Divisional champion Indians (17-4) will face Butte Central in the semis at 5 p.m. Friday back at Metra, while Laurel (13-11) will play a loser-out game against Billings Central.

Spoonhunter is not looking past No. 2-ranked Maroons, who beat the Indians twice last season, but he and his teammates would relish a rematch with Hardin in the state title game.

“Last year, we had that game. They wanted it more, and we proved that we weren’t ready for it. This year, we came back, and we’re ready for it,” Spoonhunter said. “It might be something everyone in Montana would be here for. Those are the games we live for.”

Hardin's Cayden Redfield goes up to grab a long pass during the Bulldogs' game against the Polson Pirates in the first round of the Class A state boys basketball tournament at First Interstate Arena at MetraPark on Thursday.

Hardin's Famous Lefthand shoots during the Bulldogs' game against the Polson Pirates in the first round of the Class A state boys basketball tournament at First Interstate Arena at MetraPark on Thursday.

Butte Central coach Brodie Kelly celebrates with his team with two seconds left in the Maroons' game against Billings Central in the first round of the Class A state tournament at First Interstate Arena at MetraPark on Thursday, March 12, 2020.