MISSOULA – When Bobby Hauck was hired for his second stint as the Montana Grizzlies head football coach in 2018, his son Robby approached him with an idea.

A player at fellow Big Sky Conference school Northern Arizona at the time, he wanted to pair up with his father and return to his family’s hometown. He wanted to be a Grizzly.

Bobby was unsure of the proposal.

“I asked him if I could come … and he kind of walked it back a little bit and wasn’t too sure exactly how that would be for me, which is understandable being the head coach’s son,” Robby said. “But we talked about it a little bit and what that all entails, and I was willing to take that leap of faith and so was he.”

They knew they’d be embarking down a rare path, one that would afford them the opportunity of a lifetime. But never could they have imagined all that would transcend in their time together.

But it’s been all business. They wouldn’t let their familial bond get between the common goal of the team and themselves. Because of this, and with their time not yet over, they haven’t reflected on an inevitable end to it all.

“I haven’t really thought about it because I work week-to-week getting ready for the games, trying to figure out game plans and practice,” Bobby said. “I don’t really have time during the season to reflect on things like that, but I know that it’ll be different when he’s not playing for us.”

The same goes for Robby, who hasn’t taken the time to think about his spot atop the all-time tackles list. He knows that it includes “many UM greats … who I think were probably better players than I was,” but that’s about the extent so far.

“The record is something that I’m proud of but something that I haven’t necessarily thought about a ton yet,” Robby said. “It’s probably something I’ll reflect on more when I’m done this season.”

But just this once, ahead of their final Brawl of the Wild together, they tried to reflect for the first time.

In their very initial reflections, the father-son duo brought their quotes back to the same idea: lucky to be together.

They both look on that as fondly as one could, but from different perspectives. Bobby looks at it from the coach’s view.

Coaching is his career. It’s what he does. It wasn’t going to stop with his son playing at the same level, so this was quite literally the only way he was able to see him play.

“It’s been really cool because I probably wouldn’t have had the chance to see him play if he’d have gone somewhere else,” Bobby said.

For Robby, this might be the only time period for the rest of his life where he’s with his dad every single day. Albeit in a coaching capacity a lot of the time, he is thankful for the experience because what he does next in his life, and where he ends up, are all mysteries.

Graduation means a job and a new life, but where those things will take place is all unknown. But wherever it is, there’s a good chance it won’t involve his dad every day.

“Being around him every day for the past six years is completely unique, and I don’t think there’s another time period in my life where it’ll be that way,” Robby said. “We’ve both taken advantage of it. Little things like going up to his office and talking ball and talking about our opponents … they are things that I’ll remember.”

After the team’s recent Senior Day game versus Eastern Washington, they had some more time to think back on all that’s transpired over the past handful of years.

Robby, rightfully the last senior called out of the tunnel to cap off the class, had a longer-than-usual, warm embrace with Bobby before running out to the field. In that moment, moments of their history together likely flashed backed through their brains.

“It sounds cliché, but it’s amazing how fast it goes,” Robby said. “Potentially being a last home game and the clock is ticking. You never know when the last time you’re going to put these shoulder pads on is. So it was a special moment. I can’t put words to it, but something I’ll remember forever.”

It was a moment between father and son — not son and coach.

“It’s always good when I get to see my dad here and there during these past few months,” Robby said. “That was probably one of those moments.”

While one chapter of Robby’s remarkable time in Missoula is nearing a close, another one will be starting.

Whether his future work or relationships or desires take him elsewhere in the country, it will always be home. His mother is from St. Ignatius, his grandparents moved back to town nearly a decade ago, and his dad coaches here. Not to mention his uncle Tim is a Grizzly legend.

Family time will always bring him back.

“After wins I go up to my parents’ house for a little bit and usually have dinner with them and watch a few games with my dad … if we’re not doing that we’re probably fishing,” Robby said. “We have big family dinners almost every Sunday. It’s awesome to see everybody.”

He’ll also, without a doubt, always be a “proud alum that supports any way I can.”

Maybe one day he’ll even be involved with the program once again. Whether it’s monetary or back on the sideline, the school would likely accept both forms of support.

But near or far, as Robby says the next six months are all still to be decided, he’ll bleed maroon and silver. His time as a player may be coming to an end, but his time as a Grizzly will last forever.

“It’s always there,” Bobby said. “You always have that bond of Grizzly football, certainly.”

Lucas Semb is the Griz football beat writer for the Missoulian. Follow him on Twitter @Lucas_Semb or email him at lucas.semb@406mtsports.com.

Both Griz and Bobcat fans were revved up by ESPN's College GameDay on Saturday morning. 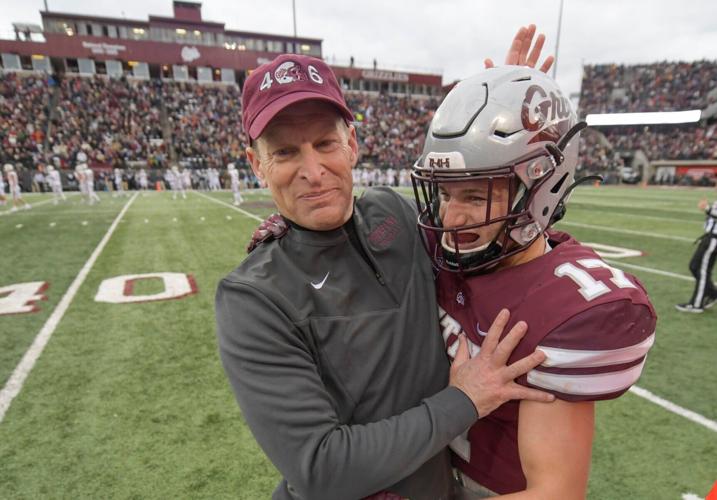 Montana football coach Bobby Hauck, left, and his son safety Robby Hauck (17) share a moment as the Griz beat Montana State, 29-10, in the 120th Brawl of the Wild on Nov. 20 in Washington-Grizzly Stadium in Missoula. This weekend will be their final Brawl of the Wild together as a player-coach duo. 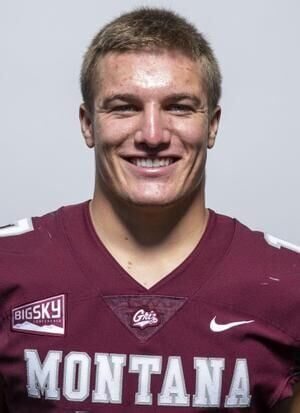