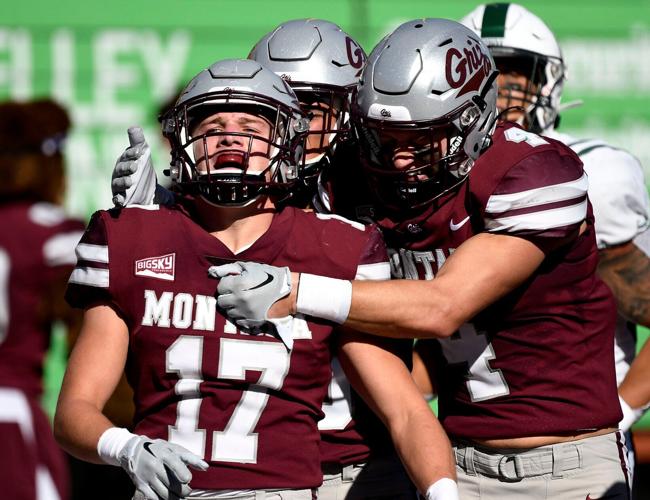 Montana safety Robby Hauck is congratulated by Ryan Simpson and other teammates after he returned a missed field goal attempt 99 yards for a touchdown against Portland State on Saturday at Washington-Grizzly Stadium. Hauck also set the school record for career tackles during the game. 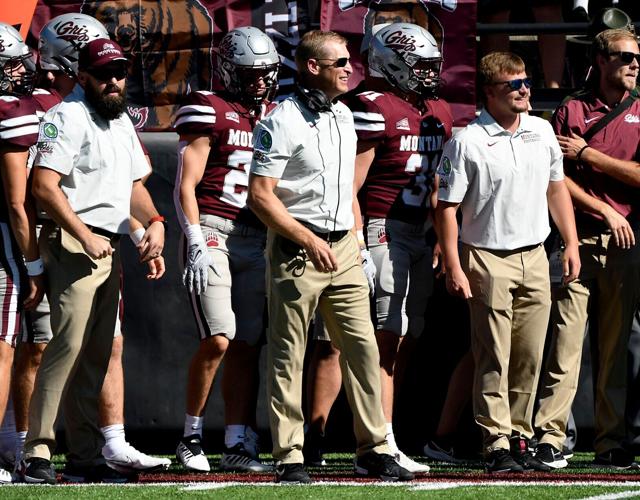 Montana head coach Bobby Hauck smiles after a Grizzly touchdown against Portland State on Saturday at Washington-Grizzly Stadium. With the win, he moved past former Nevada coach Chris Ault to become the second-winningest coach in Big Sky history.

MISSOULA — Robby Hauck turned a special day into a Hollywood script when he returned a missed 54-yard field goal attempt for a 99-yard touchdown Saturday.

The Montana senior safety who has started 44 consecutive games had never scored a college touchdown before that game against Portland State. It was a storybook ending to a first half that included him breaking the school record for career tackles as the No. 2 Grizzlies improved to 4-0.

“It was great obviously,” he said. “Yeah, it was good. But really was more fired up about us getting the win today. I’ll probably take a little bit of time to think about that now, but we were all pretty locked in and ready to go and make sure we could get a win after today.

“But no, it was great. I love my teammates. I love our defense. I care about everybody, and they care about me. So, it’s really special.”

After the 53-16 win, Hauck received the game ball in front of cheering teammates in the locker room. His uncle Tim Hauck, who was a three-time All-American for the Griz, made the presentation.

“Honored to have spent the past few years playing next to Robby Hauck,” Griz senior D-lineman Eli Alford wrote on Twitter. “His work ethic and passion for the game is unmatched. Incredible player and even better man.”

Hauck broke the record when he tackled Nate Bennett, a 2021 All-Big Sky honorable mention wide receiver, in the second quarter. He entered the game needing three tackles to top the list.

“There’s a lot I’ve learned from Robby,” his cousin and Griz linebacker Ryan Tirrell said during fall camp. “If I had to narrow it down to a couple things, I’d say just to be relentless and aggressive. Watching him practice is pretty cool because he practices hard. There’s never a time where he’s not practicing hard. Not only in games being aggressive, but especially practicing he really shows you how to practice and he does it right.”

Robby Hauck is joined in the top 10 by (in order): Olson, Vince Huntsberger, Tyler Joyce, Matt Hermanson, Kent Clausen, Jordan Tripp, Mike Rankin, Jace Lewis and Colt Anderson. Tim Hauck is just outside the top 10 at No. 11. UM has tracked tackles since 1976.

Hauck had started his career at Northern Arizona, where he redshirted in 2017. He transferred to Montana in 2018 when his father, Bobby Hauck, was hired as the Griz head coach.

“It’s cool. It’s not some obscure baseball stat like most safeties or something like that. It’s a pretty significant record, number of tackles,” Bobby Hauck said. “When you look at the 10 in school history, it’s kind of the who’s who in Grizzly football and Griz defense. Good for him. He’s a guy that makes a lot of plays for us. We’re all happy for him.”

Last week, Robby Hauck moved into second on the list by passing Huntsberger, who officially tallied 393 tackles from 1998-2001. The Grizzly Sports Hall of Famer actually had 469 tackles in 55 games, but the NCAA didn’t start counting postseason stats as official until 2002.

Robby Hauck was asked which felt better: breaking the record or scoring his first touchdown?

“That touchdown is pretty cool,” he said. “I don’t know if it’ll ever happen again. But I’ll remember that one.”

Robby Hauck had presented Bobby Hauck with the game ball when the latter became Montana’s all-time winningest coach following the victory at Idaho in 2018.

Bobby Hauck has continued to work his way up the Big Sky’s wins list and reached another milestone Saturday. He passed former Nevada coach Chris Ault to move into second place.

Ault was inducted into the College Football Hall of Fame in 2002 after he first retired; he later returned to coaching. He coached again at Nevada while Hauck was at UNLV when both schools were in the Mountain West.

“He got the best of me for the most part down at UNLV, so I’m glad I went by his ass,” he said about Ault. “We all know each other. That’s an honor. He’s a hall of famer. Chris Ault is as good a football coach as I’ve ever come across. All kidding aside, that’s pretty humbling to go by a guy like that that’s a hall of fame football coach. He’s got the best of me plenty.”

Hauck now trails only Jerome Souers, who racked up a career record of 123-114 in 21 seasons at Northern Arizona from 1998-2018. Souers was an assistant coach at UM from 1986-97, a period during which Hauck began his coaching career with the Griz.

The Griz are 4-0 to start the season for the first time since 2009, when they began 14-0 before losing in the national championship game. That was the final year of Bobby’s Hauck first head coaching stint at UM.

With a 3-0 home record this year, Montana improved to 18-1 in games at Washington-Grizzly Stadium since the start of the 2019 season. They’re 8-6 on the road in that same stretch.

“That’s a good football team,” Portland State coach Bruce Barnum said. “We knew they were good coming in. … They were everything I saw on film plus more.”

Frank Gogola is the Senior Sports Reporter at the Missoulian. Follow him on Twitter @FrankGogola or email him at frank.gogola@missoulian.com.

Live coverage: Montana Grizzlies host SEMO in the first round of the FCS playoffs

The Montana Grizzlies (7-4) host Southeast Missouri State (9-2) in the opening round of the FCS playoffs in Missoula.

The Griz scored 31 unanswered points to storm back and advance to the second round of the FCS playoffs.

The Griz need an all-around bounce-back performance to survive and advance in the FCS playoffs.

Heat from the Beat: NDSU beat writer Jeff Kolpack weighs in on this year's Bison

NDSU is an FCS blueblood, but are they as good as they've been in recent years? Bison beat writer Jeff Kolpack weighs in ahead of Saturday's showdown.

The Alford brand: Montana Grizzly senior Eli Alford striving to do good by his family name

When his dad passed away, Griz senior Eli Alford was forced into finding his way through alternate guidance and heightened responsibility.

The Redhawks won the Ohio Valley Conference this season, but haven't played against a team from the Big Sky yet.

The NDSU Bison go as their offensive line goes, and the Griz will have to give that group some resistance if they want to slow down the run game.

Brandon Whitney scores a season-high 17 points in his return, but the Griz fall just short of erasing a 12-point deficit in the final five minutes at Air Force.

The Griz (3-3) will take on Air Force 1 p.m. Sunday in Colorado. They'll then travel to Southern Miss 6 p.m. MT Tuesday in Hattiesburg, Mississippi.

Montana safety Robby Hauck is congratulated by Ryan Simpson and other teammates after he returned a missed field goal attempt 99 yards for a touchdown against Portland State on Saturday at Washington-Grizzly Stadium. Hauck also set the school record for career tackles during the game.

Montana head coach Bobby Hauck smiles after a Grizzly touchdown against Portland State on Saturday at Washington-Grizzly Stadium. With the win, he moved past former Nevada coach Chris Ault to become the second-winningest coach in Big Sky history. 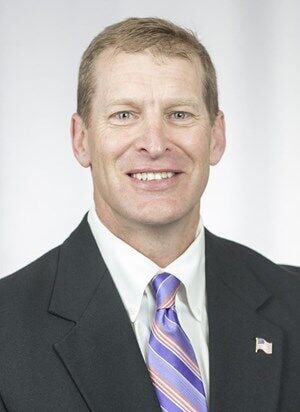 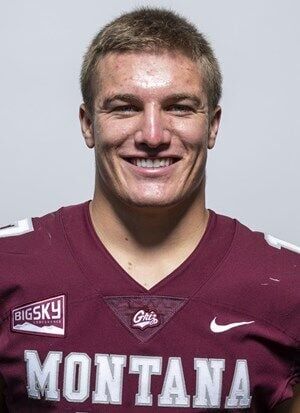