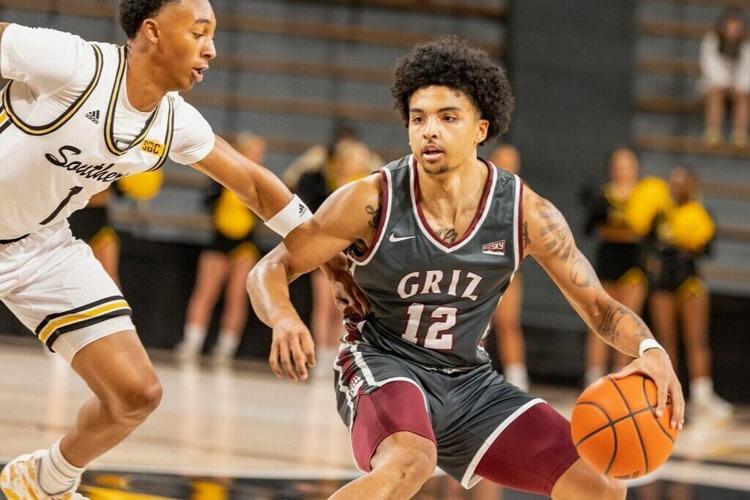 Montana guard Brandon Whitney dribbles the ball in the college men's basketball game against Southern Miss on Tuesday in Hattiesburg, Mississippi. The Griz held the Golden Eagles 14 points below their season average but lost 64-54. 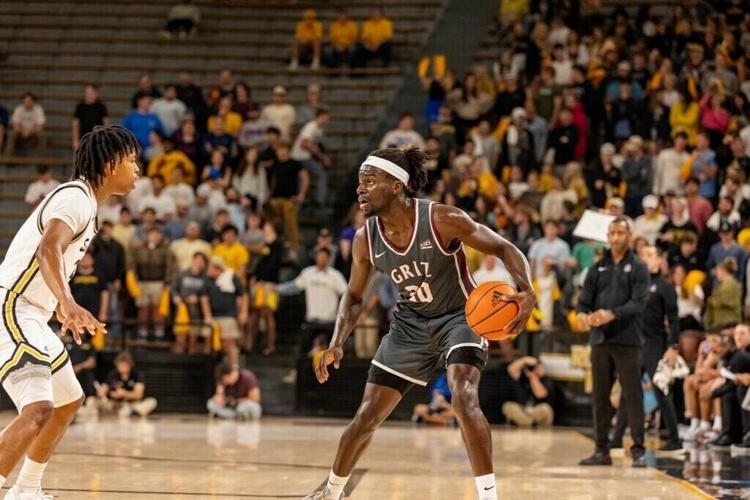 Montana ended November like it started the first month of the season: losing on the road to a team with bigger, more athletic, lengthier players.

But unlike the season-opening losses at Duquesne and Xavier, the Griz gave up nowhere close to the 91 and 86 points they allowed those games. They held Southern Miss to 64 points on Tuesday in Hattiesburg, Mississippi.

It’s not that they were playing a team much worse than the two they saw on their trips to Pennsylvania and Ohio. The Golden Eagles came into the game ranked 78th in the country with 78.1 points per game and finished the game with an 8-0 record, making them one of 18 teams that’s still undefeated.

The Griz held that team over 14 points below its season average while playing their second road game in three days, going from 6,000 feet above sea level in Colorado Springs, Colorado, to a mere 171 feet in Mississippi. They also committed just eight turnovers leading to two USM points after the Golden Eagles entered the game 11th in the nation by forcing 20.3 per game.

Cold shooting spells still plagued the Grizzlies in the 64-54 loss that dropped them to 3-5 overall and 0-4 on the road. But UM head coach Travis DeCuire could sense a much-needed shift was afoot for a team that left three possible wins out there: against Troy (73-62), Air Force (59-56) and Southern Miss.

“Positive and disappointed at the same time,” he said of his feelings after the game on his postgame radio interview. “I’m happy about the effort and the attention to detail. Defensively, we made a jump. I think execution-wise, we were better. We grew in some areas and there’s some areas where we won.

“The disappointing piece is you flash back to earlier in the year against like opponents and the effort wasn’t what it needed to be in terms of our physicality, attention to detail, sense of urgency. We got their attention now. We had to have some heart to hearts and some pretty serious conversations the last 48 hours. Sometimes you warn guys to get to a point. I think they got the message.

“It’s a little later than we would have wanted. But November has never really been favorable to us. We draw a tough schedule. We go on the road. We play good teams. We’re not dodging teams. We had a year where we came in with a worse record than this and still won the league. There’s a lot out there for us. We just need to continue to grow.”

Montana’s defense never truly let the game get out of hand. The deficit stayed within five to eight points for most of the first half and between eight and 13 points in the second.

The unexpected challenge came from Donovan Ivory, who poured in 20 points off the bench. He came in averaging just 5.1 per game and was far down UM’s scouting report.

“That’s what you need to do to win these types of games is they had to find someone other than their guys to come off the bench and produce offense,” DeCuire said. “We didn’t get that matched tonight, and that was the difference in the game.”

Finding offense against Southern Miss was going to be a challenge for a team prone to scoring droughts. The Golden Eagles entered the game ranked 11th in the country by allowing just 55.1 points per game. The Griz were 315th with 64 points scored per game.

One thing Montana didn’t need against a high-scoring offense was a slow start, but the Griz fell behind by eight points early as they went 6:40 without scoring a point. That was the first of four scoring droughts of 3-plus minutes as they never got within five points after that.

Martin broke out with a season-high 18 points by hitting four triples as he adjusted to shooting over lanky players contesting shots. Forward Dischon Thomas added 15 points and nailed a trio of 3-pointers. The Griz finished 8 of 25 (32%) behind the arc and 18 of 47 (38.3%) from the field.

Whitney was held to eight points after he had a season-high 17 in his return from a right foot injury Sunday. Josh Bannan had 10 points and eight rebounds. Jonathan Brown didn’t score in his first start. Freshman Jaxon Nap had the only three bench points in a season-high 21 minutes.

The Griz are still in search of finding their offensive groove as they return to Missoula for their final home game of nonconference play Tuesday against South Dakota State. They’re hoping to get a boost from the return of guard Aanen Moody, their top 3-pointer shooter, who’s missed three games due to the flu.

“I would sum it up different today than I would have yesterday,” DeCuire said of his team’s performance in November. “Yesterday, I wouldn’t have had an answer for you, I would have been disappointed. Right now, I think we’ve got some growing pains. I think in 48 hours we became a different basketball team.

“The thing I keep reminding myself is it’s hard to play good basketball when you don’t have your starting backcourt. It puts guys in roles that aren’t their role for the year and it’s a little unfair to the guys that are on the floor. With Whit getting back to health, I think he’s still another week away from that.

“Moody, we get him back, I think that will give guys like Bannan and Dischon some help offensively. You put another 10, 15 points on the board for us tonight, it’s a different basketball game. I think that we can get that whether Moody scores it or he helps us create that for others. I think we’ll be a better basketball team.”

Frank Gogola is the Senior Sports Reporter at the Missoulian. Follow him on Twitter @FrankGogola or email him at frank.gogola@missoulian.com.

Kent Baer and Barry Sacks had been on the Griz staff since head coach Bobby Hauck returned ahead of the 2018 season.

With the departure of former defensive coordinator Kent Baer, Montana has familiar guys they could call on to fill the void.

The Bobcats will leave Missoula with a win for the first time since 2010 and complete the Brawl of the Wild sweep Saturday.

The Grizzly men's tennis team improved to 3-1 in dual action.

There were event winners, school records and plenty of individual bests for the Montana track and field team this past weekend at the Lauren McCluskey Memorial Open in Moscow, Idaho.

The Griz are seventh in the Big Sky standings, but a handful of numbers say their record should be better than it currently is at 3-5.

The Grizzlies are seeking their 12th consecutive win over the Bobcats in Missoula.

Montana guard Brandon Whitney dribbles the ball in the college men's basketball game against Southern Miss on Tuesday in Hattiesburg, Mississippi. The Griz held the Golden Eagles 14 points below their season average but lost 64-54.