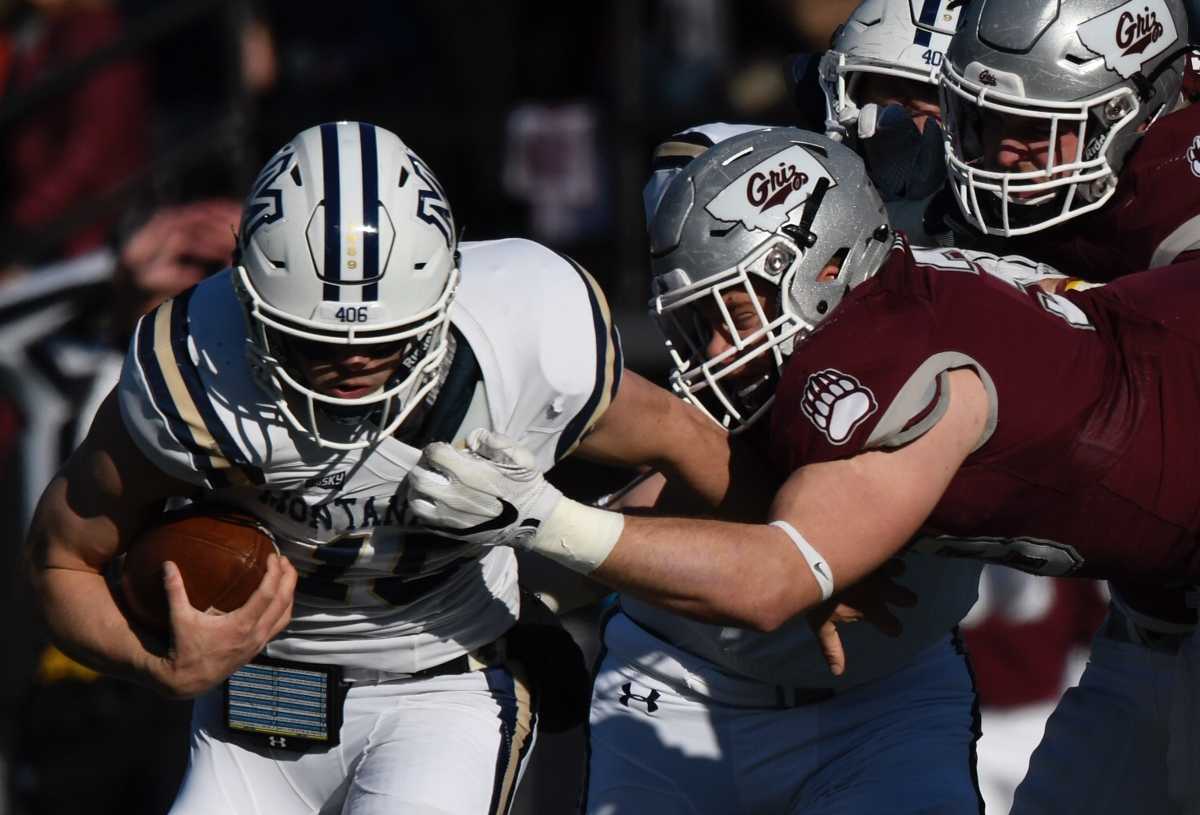 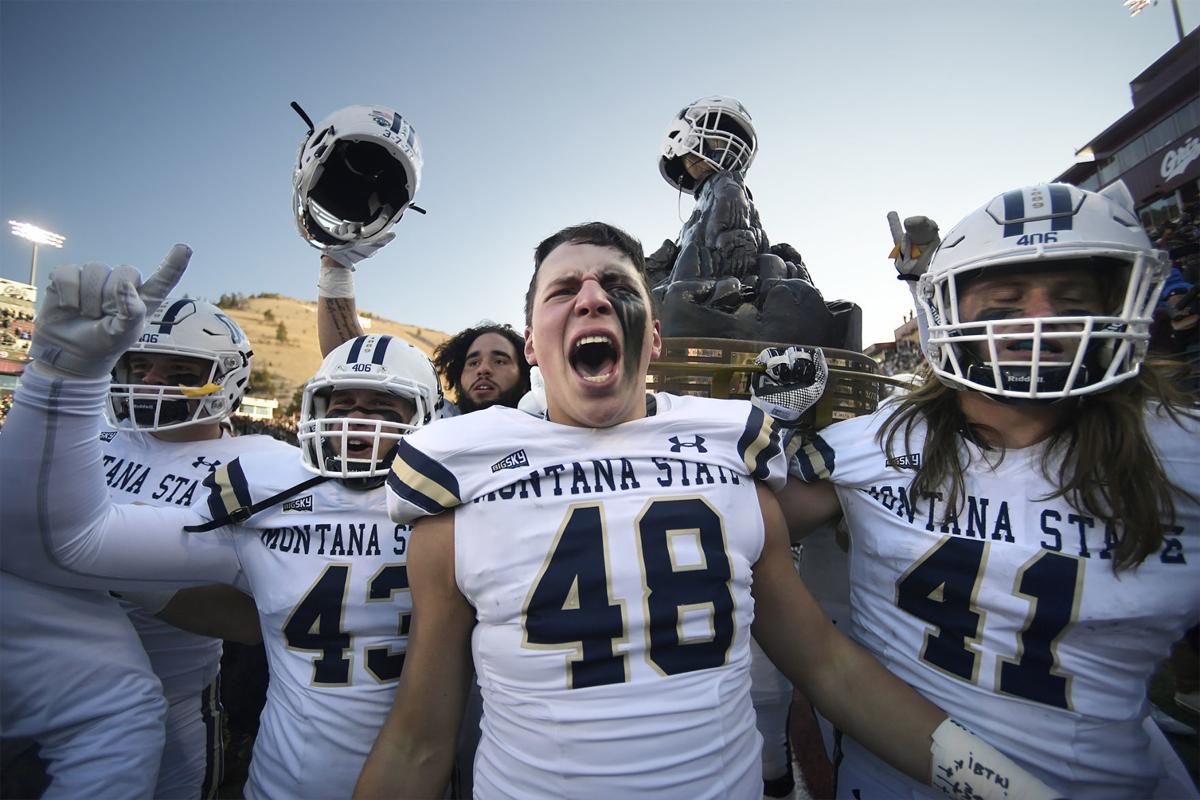 Members of the Montana State football team hoist the Great Divide trophy after the Bobcats beat the Montana Grizzlies 29-25 in the 118th Brawl of the Wild at Washington-Grizzly Stadium. 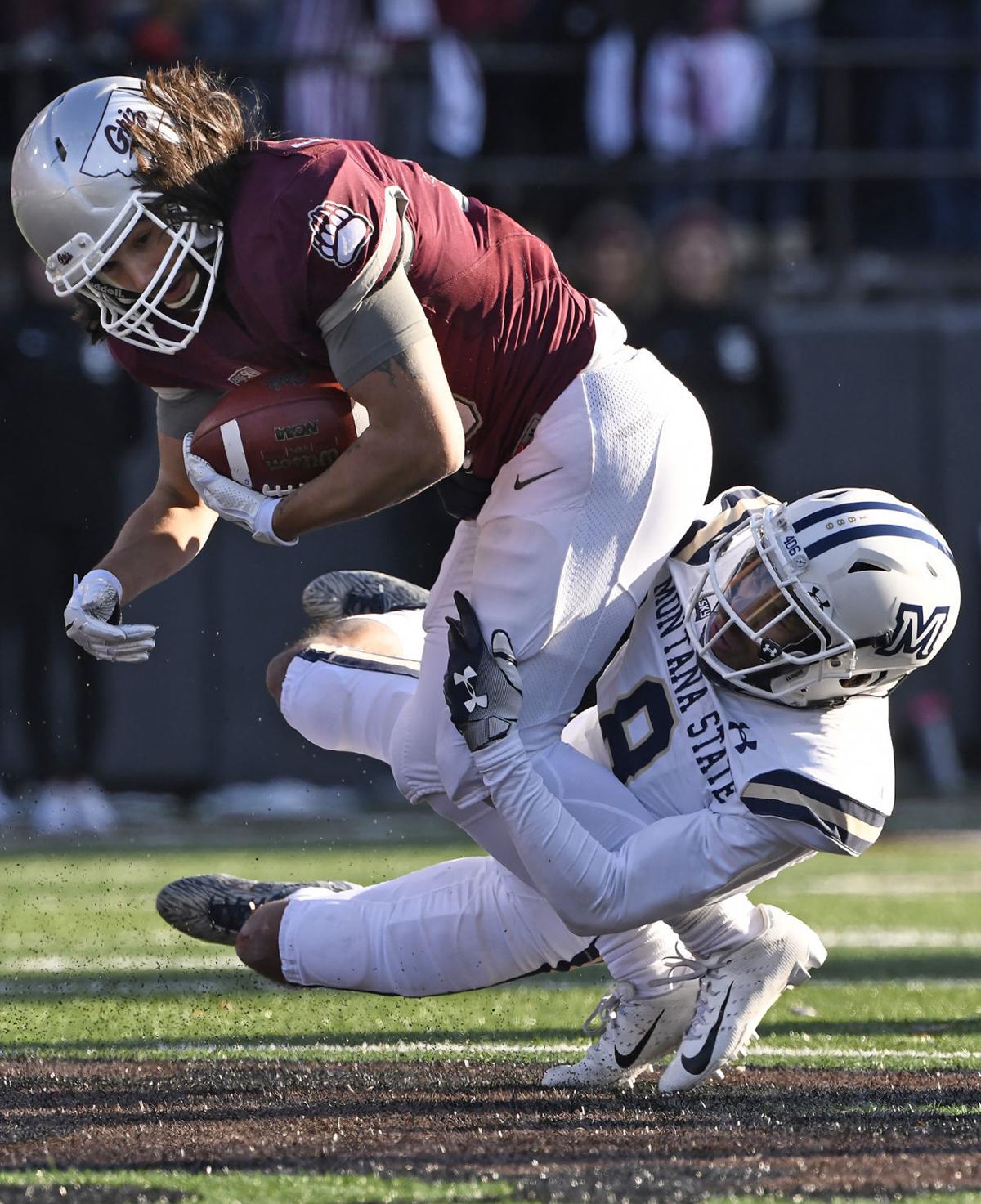 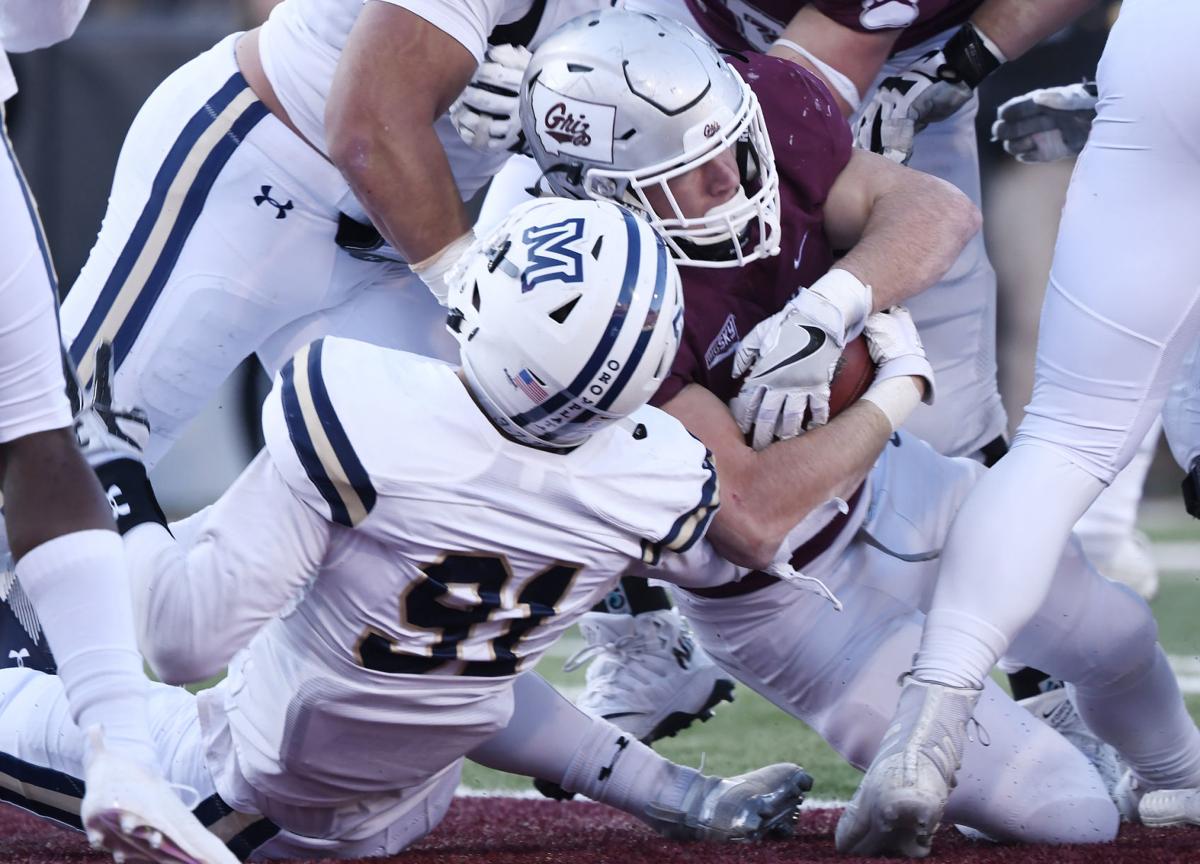 Montana running back Adam Eastwood scores an apparent touchdown with 14 seconds left in Saturday's game. The score was taken off the board when it was ruled by the officials that a timeout had been called by Montana State before the snap. Eastwood fumbled on the ensuing snap and MSU held on to win, 29-25. 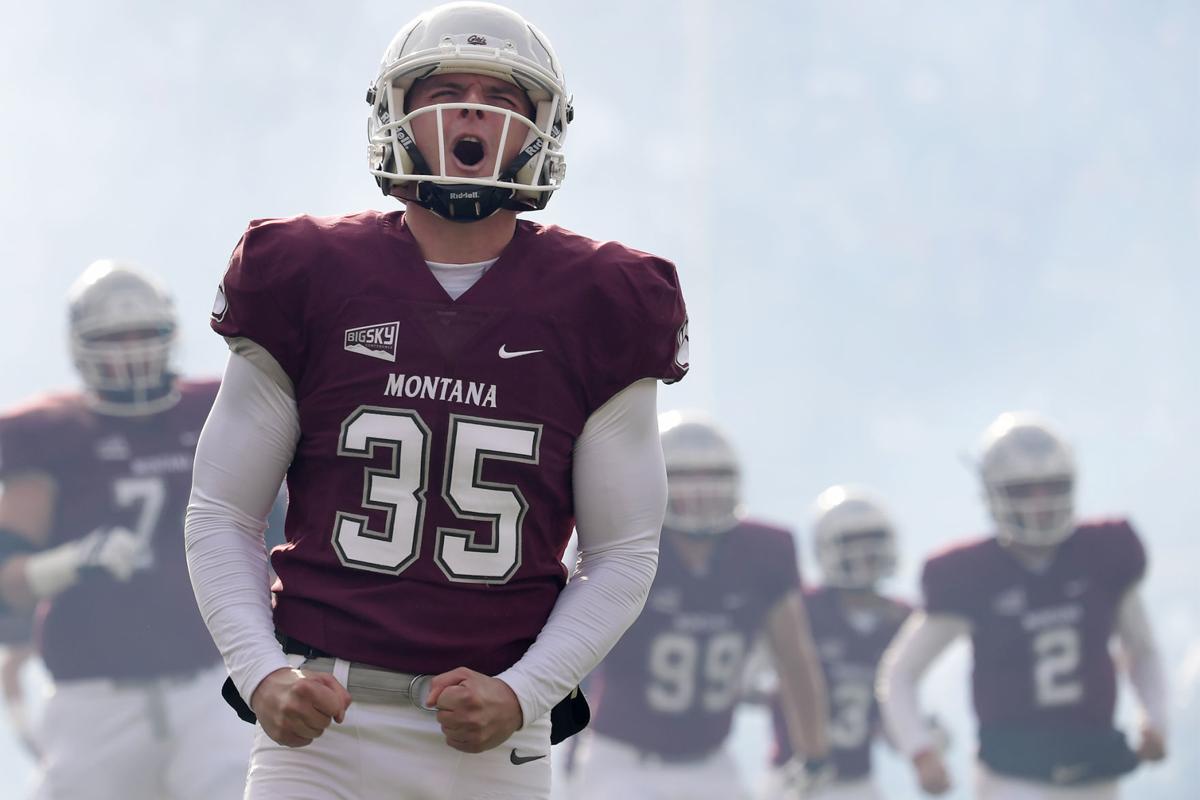 Montana senior punter Eric Williams yells to the crowd as the team takes the field. 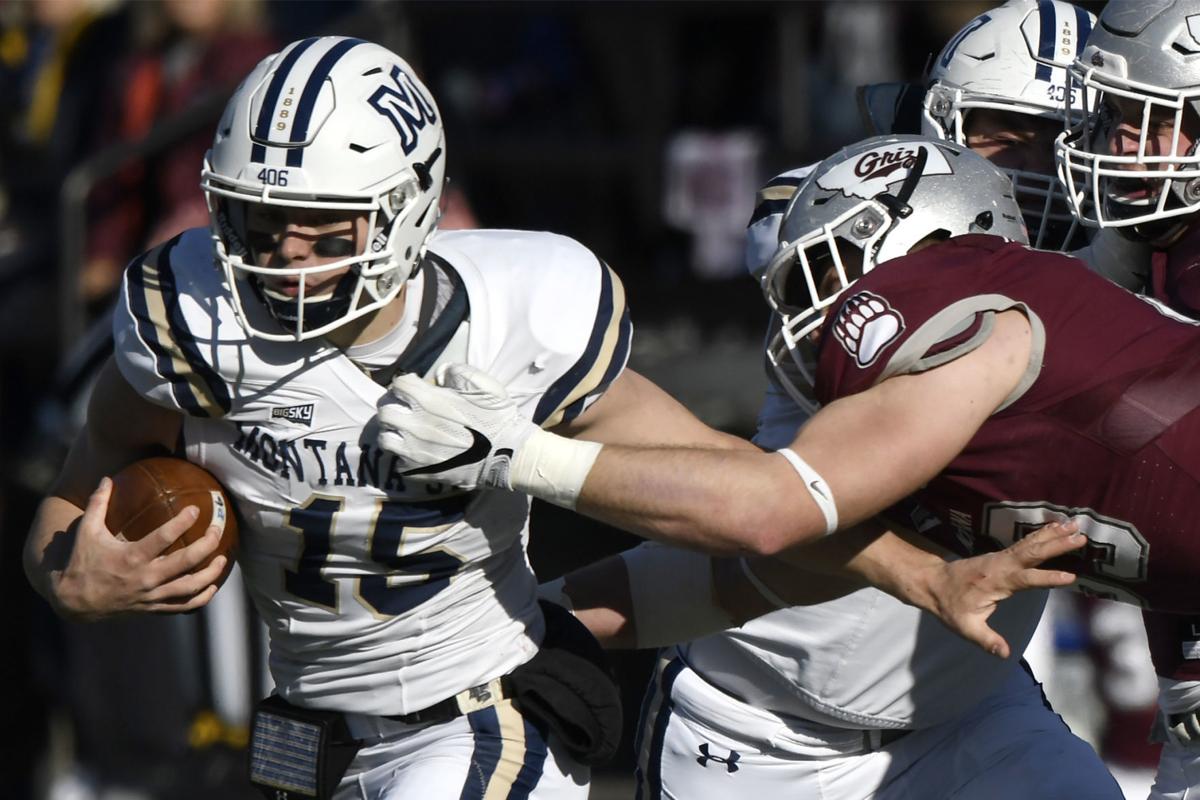 Montana linebacker Dante Olson gets a hand on Montana State quarterback Troy Andersen as a flag is thrown in the first half. 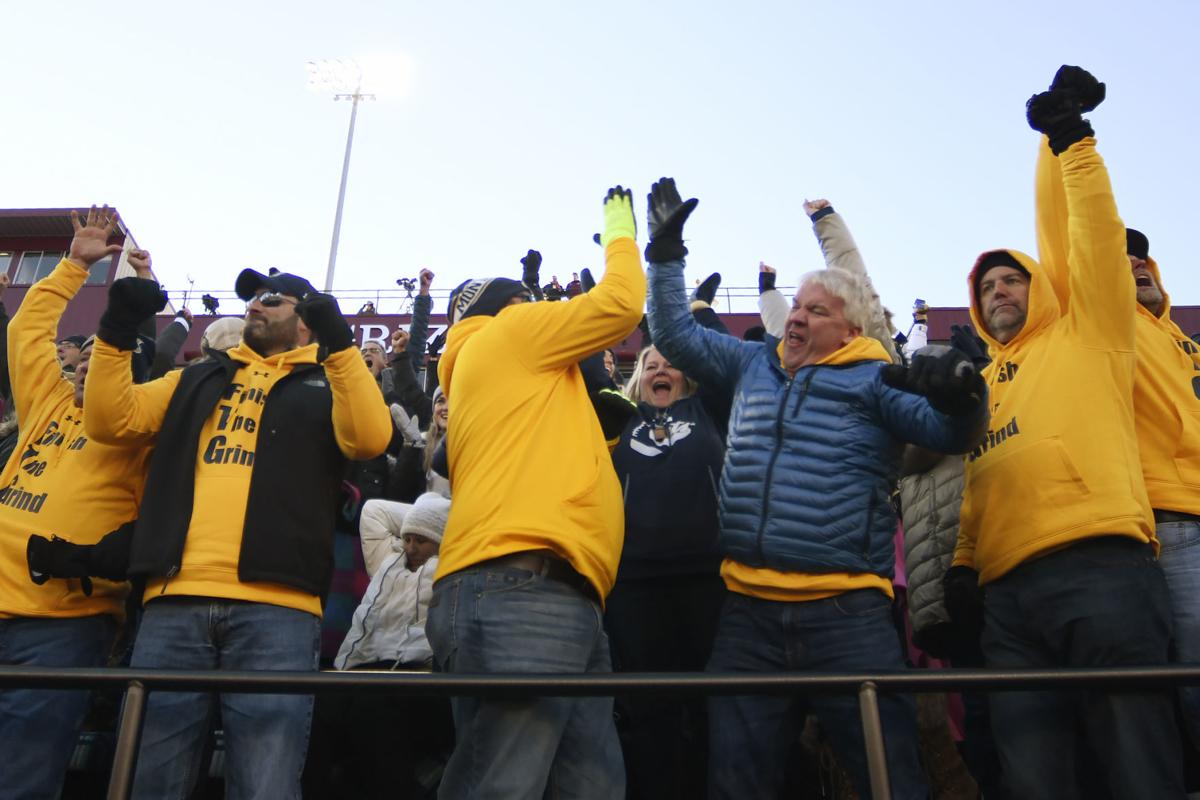 Montana State fans celebrate after Montana quarterback Dalton Sneed fumbled the ball in the second half.

MISSOULA — Everything was riding on three feet of synthetic turf.

What hung in the balance was possession of the Great Divide Trophy, statewide bragging rights and, most important, a potential berth in the upcoming Division I football playoffs.

In the end, a shrewd (if not perfectly timed) timeout call by Montana State coach Jeff Choate with mere seconds remaining and a forced fumble on the goal line by Bobcats interior lineman Tucker Yates were the difference between elation and heartbreak.

In a game that is already being billed as one of the true classics in the 118-year history of the Brawl of the Wild rivalry between MSU and Montana, the Bobcats erased a three-score deficit to prevail 29-25 on Saturday in front of 26,508 stunned fans at Washington-Grizzly Stadium.

The Cats have now beaten the Griz in three consecutive matchups for the first time in more than 30 years.

“Processing all this is probably not going to hit me for a while,” Choate said after his team’s frenetic comeback. “There was a lot that happened in that fourth quarter, and some of it seems like a little bit of a blur right now.

“We talked all week, last night in particular, that if you really want to be remembered, you make a play in this game.”

Montana coach Bobby Hauck was obviously in a different mood than Choate, his counterpart.

“I’ve got a pretty sour taste,” Hauck said. “There’s a lot of ways to find a way not to win, and this one’s particularly gut-wrenching.”

To Choate’s point, it was Colstrip’s Yates who made the biggest play.

With the ball resting on the 1-yard line with 14 seconds left and MSU clinging to a four-point lead, Montana quarterback Dalton Sneed handed off to running back Adam Eastwood, who was immediately met by Yates at the line of scrimmage.

Incredibly, the ball popped out and was recovered by Derek Marks to thwart the Grizzlies’ shot at victory. That’s when MSU’s celebration began.

“I just had so much faith in our defense,” Bobcats quarterback Troy Andersen said. “They played so hard. Guys like Bryce (Sterk) and Tucker and Grant (Collins), you just trust them and you know they’re going to make the play. They fight so hard and for them to make that play, it was awesome.”

Eastwood scored on a similar short run one snap earlier, but Choate had called time out just before the snap to kill the play. It’s the most prosperous timeout he’s ever used.

Hauck said the Grizzlies’ offense needed to gather itself emotionally after having the winning touchdown taken off the board.

“When you think you’re in and you’ve got the game won, that’s probably something that we had to do,” he said. “We had plenty of time to get reset. Just run it again. We were in the end zone and apparently they got the timeout called. We had two downs to get it.”

The loss was a tough pill to swallow for the Griz, who dominated the first half on the strength of precise offensive execution and a slew of mistakes by the Bobcats.

Gabe Sulser found the end zone on a 1-yard pass from Sneed to open the scoring on the first drive of the day. Eastwood followed with another 1-yard scoring run early in the second quarter.

It was 22-0 with 8:15 before halftime when Sneed hit wideout Sammy Akem over the top with a 37-yard touchdown pass and a subsequent two-point conversion.

Sneed, who finished with 354 passing yards, flustered MSU’s defense with an ability to elude pressure and convert long third-down plays. Akem was the benefactor, finishing with 147 receiving yards.

By comparison, at one point in the second quarter the Bobcats had 50 yards in penalties to just 60 yards of total offense. But MSU stuck with it.

A 72-yard touchdown drive, capped by a 3-yard run by Andersen, gave MSU its first points with 23 seconds left before halftime.

It proved to be a momentum-shifter for the offense, and the defense rose to the occasion in the second half by allowing only a Tim Semenza field goal in the fourth quarter. (Notably, Semenza missed a 40-yard attempt in the third.)

Andersen had two fourth-quarter touchdown runs (and a two-point conversion) and led a 22-point surge in the final 15 minutes. One key play was a 45-yard pass to receiver Travis Jonsen that set up Andersen’s second TD run.

But it was Logan Jones’ 13-yard scoring dash with 2:19 left on an option pitch from Andersen that served as the winning touchdown. Though it didn’t come without dread.

After Jones scored, Malik Flowers returned MSU’s kickoff 47 yards to midfield, and the Griz were in the red zone just three plays later. But they couldn’t finish.

“I thought there were a couple big plays that we didn’t make,” Hauck said. “I thought their touchdown at the end of the first half was big. Real big. I thought our missed field goal was a big play that skews the thing a little bit.

“I think us getting beat on the fade ball (to Jonsen) there in the fourth quarter was really big when we were up 10. Those three plays are probably deal breakers a little bit, along with the turnovers.”

To that point, the go-ahead touchdown was made possible when Collins forced Sneed to fumble and recovered the ball in front of the Griz sideline with 5:16 remaining, a play that was upheld upon official review.

Between the fumbles caused by Collins and Yates, it was a 14-point swing.

The Grizzlies finished the regular season with a 6-5 overall record and a 4-4 mark in the Big Sky Conference, and are likely out of consideration for inclusion in the FCS playoffs.

With three straight wins the Bobcats improved to 7-4 (5-3 Big Sky) and have legitimate playoff hopes, which seemed unlikely a month ago.

“I think we’re going to be a tough out if we get in the tournament,” Choate said. “I think it’s a team that’s deserving of the opportunity.”

The NCAA Division I Football Championship bracket will be announced Sunday.

NOTES: MSU has its first three-game winning streak over Montana since winning each year from 1983-85. … The Griz outgained the Bobcats 454 to 387 in total offense. WR Keenan Curran had eight catches for 111 yards in his final game at UM. … Andersen now has 19 rushing touchdowns, one shy of tying the single-season school record.

'We will miss football': Grizzlies reflect on opting out of Big Sky Conference spring season

MISSOULA — Montana won’t be playing any of its usual opponents on the football field this spring, if the team plays at all.

Former Montana All-American WR Samori Toure has landed in the Big Ten for his final year of eligibility as a grad transfer.

Members of the Montana State football team hoist the Great Divide trophy after the Bobcats beat the Montana Grizzlies 29-25 in the 118th Brawl of the Wild at Washington-Grizzly Stadium.

Montana running back Adam Eastwood scores an apparent touchdown with 14 seconds left in Saturday's game. The score was taken off the board when it was ruled by the officials that a timeout had been called by Montana State before the snap. Eastwood fumbled on the ensuing snap and MSU held on to win, 29-25.

Montana senior punter Eric Williams yells to the crowd as the team takes the field.

Montana linebacker Dante Olson gets a hand on Montana State quarterback Troy Andersen as a flag is thrown in the first half.

Montana State fans celebrate after Montana quarterback Dalton Sneed fumbled the ball in the second half.