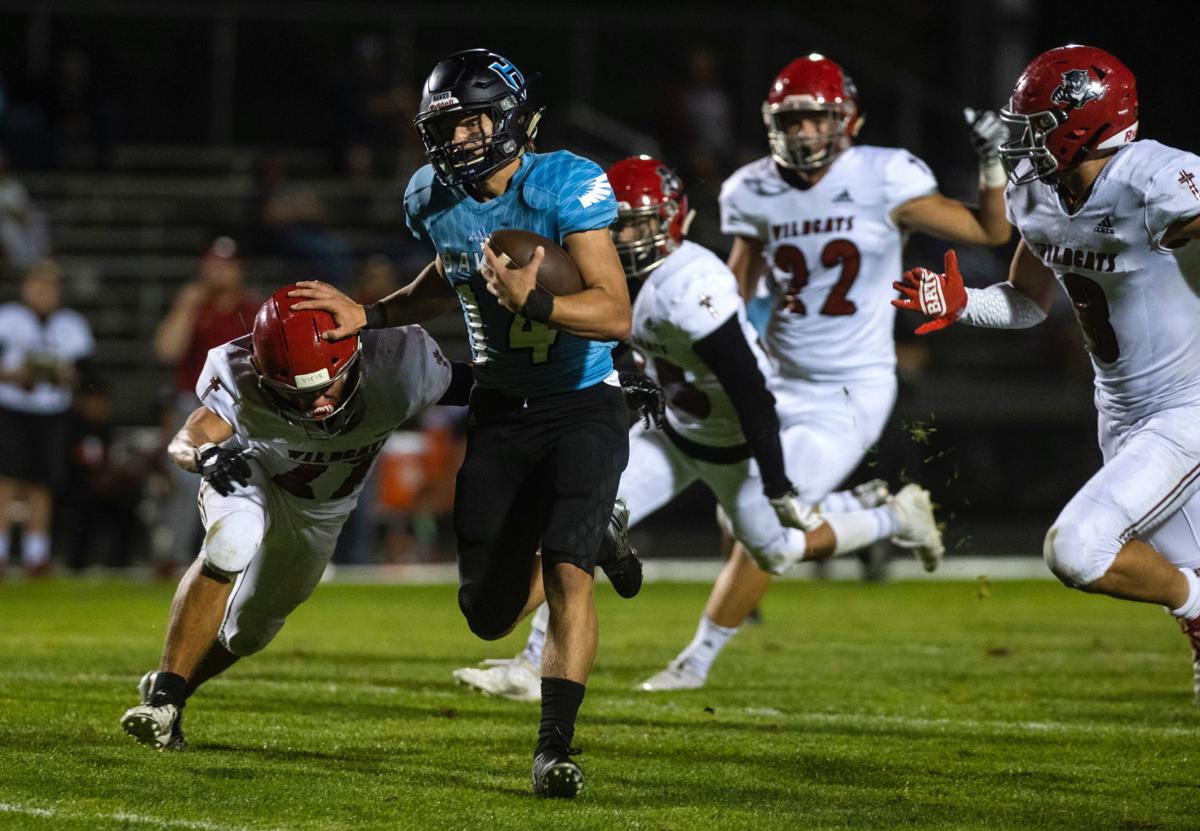 Montana commit Levi Crum runs with the ball while playing quarterback for Hockinson High School in southwestern Washington. Crum will be joining the Grizzlies this coming fall as a preferred walk-on projected to play safety.

Montana commit Levi Crum lines up as a safety for Hockinson High School in southwestern Oregon. He'll be joining the Griz this fall as a defensive player after primarily playing quarterback the past two seasons.

MISSOULA — Levi Crum knew he'd do whatever it took to play at Montana after participating in a Grizzly football camp last June.

The Washington high school senior didn’t get a scholarship offer after camp but made a good enough impression that he was told there might be a spot for him as a walk-on if he was willing to wait for one to become available. Crum had offers from Carroll College, Montana Western and a handful of other NAIA and Div. III schools but was getting a good feeling from the UM coaches as time passed, so he didn’t sign anywhere in the winter.

It took about 11 months, but a spot finally came available. Crum got the news during a phone conversation with defensive line coach Barry Sacks earlier this month and soon after committed to join the Grizzlies’ 2020 recruiting class as a preferred walk-on projected to play safety.

“It was pretty exciting,” said Crum, a 2-star recruit and senior at Hockinson High School in southwestern Washington. “It was the one I was waiting for. It was out of my control at that point, so I was just waiting for that call. When I got it, I was pretty excited.”

Crum had initially developed interest in the Griz when Sacks visited Hockinson before the summer camp he attended. He looked into UM more and discovered that Washington-Grizzly Stadium “always seemed like a cool place to play.”

When Crum got on campus, he saw similarities between the way the Griz and his high school team are run. That helped make UM an easy sell for him, in addition to the positive impressions he got of the facilities and the Missoula area, which included a fly-fishing trip, during his first-ever visit to the state.

“When I was down there at camp, I got to see the coaching staff and the program and how it was run, and it excited me as a high schooler, and at that point, I knew that’s where I wanted to go,” Crum said. “I think it’s built around being tough. It’s a tough program, which is kind of similar to my high school program. It’s kind of ran the same way. It really just excited me.”

The 6-foot, 185-pound Crum is looking forward to focusing on defense and contributing on special teams after suiting up as a two-way player in high school. He was primarily the team’s quarterback but also practiced on defense throughout the season, taking the field on both sides of the ball late in the regular season or when the playoffs started each of the past two years.

“I think it’ll be a lot of fun to play safety, especially because it gives me the freedom to go play special teams,” said Crum, who was an outside linebacker as a sophomore before becoming a safety and has played defense in addition to offense since he started football in first grade.

He’ll try to bring to the defense the smarts and athleticism that helped him excel as a dual-threat quarterback who earned first-team all-state honors. He started there the past two years and guided Hockinson to the Class 2A state title in 2018, its second championship in a row, in the state’s third-largest classification.

Crum threw for 3,836 yards and 52 touchdowns compared to six interceptions during the 2018 title run. Among his group of receivers were Montana signee Peyton Brammer, a 3-star tight end, and Washington signee Sawyer Racanelli, a 3-star athlete and his cousin.

“Playing quarterback in high school, I think I’m pretty instinctual,” said Crum, who had also played special teams before starting at quarterback. “I feel like I have a nose for the ball, so when the ball’s in the air, I think I react pretty well. (The UM coaches) said they liked that I was a football player and there’s different places they could put me rather than just one position.”

“I didn’t enter the transfer portal to sit on the bench. I’m coming in hair on fire trying to get a spot," AJ Forbes on transferring from the Nebraska football team to the Montana Grizzlies.

MISSOULA — Michaela Hood’s time on the softball diamond at Montana was marked by the highest of highs and the lowest of lows.

Mike Petrino is wasting no time in making a big push as interim head coach of the Montana Lady Griz basketball team.

What's it like to be a mother and a Division I head coach? Montana volleyball coach Allison Lawrence shares her experiences and insight into the challenges and joys it brings.

COVID-19 concerns caused the deadline for Griz football season ticket renewals to be pushed back another month.

Montana commit Levi Crum runs with the ball while playing quarterback for Hockinson High School in southwestern Washington. Crum will be joining the Grizzlies this coming fall as a preferred walk-on projected to play safety.

Montana commit Levi Crum lines up as a safety for Hockinson High School in southwestern Oregon. He'll be joining the Griz this fall as a defensive player after primarily playing quarterback the past two seasons.