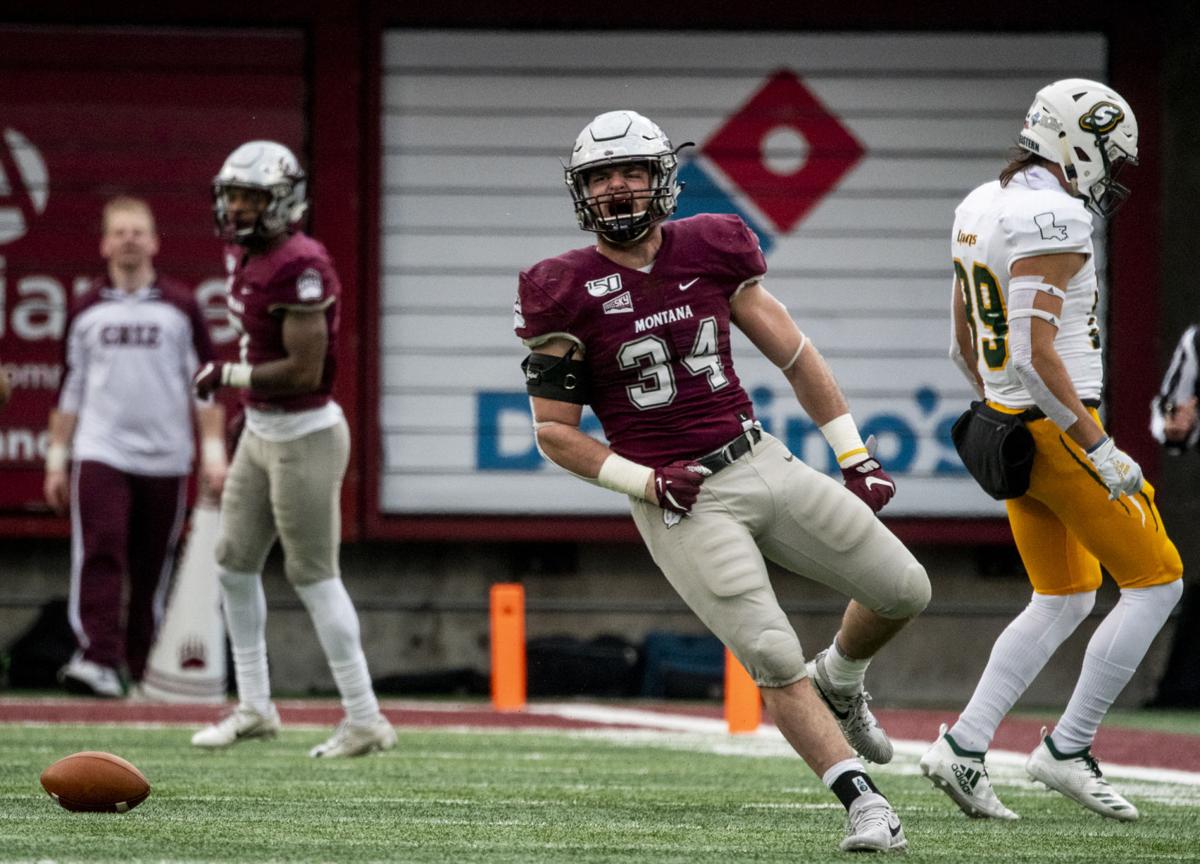 Montana linebacker Jace Lewis (34) celebrates after a tackle on defense during the Grizzlies' second-round playoff win against Southeastern Louisiana in December at Washington-Grizzly Stadium. Lewis was named the Big Sky preseason defensive MVP on Friday. 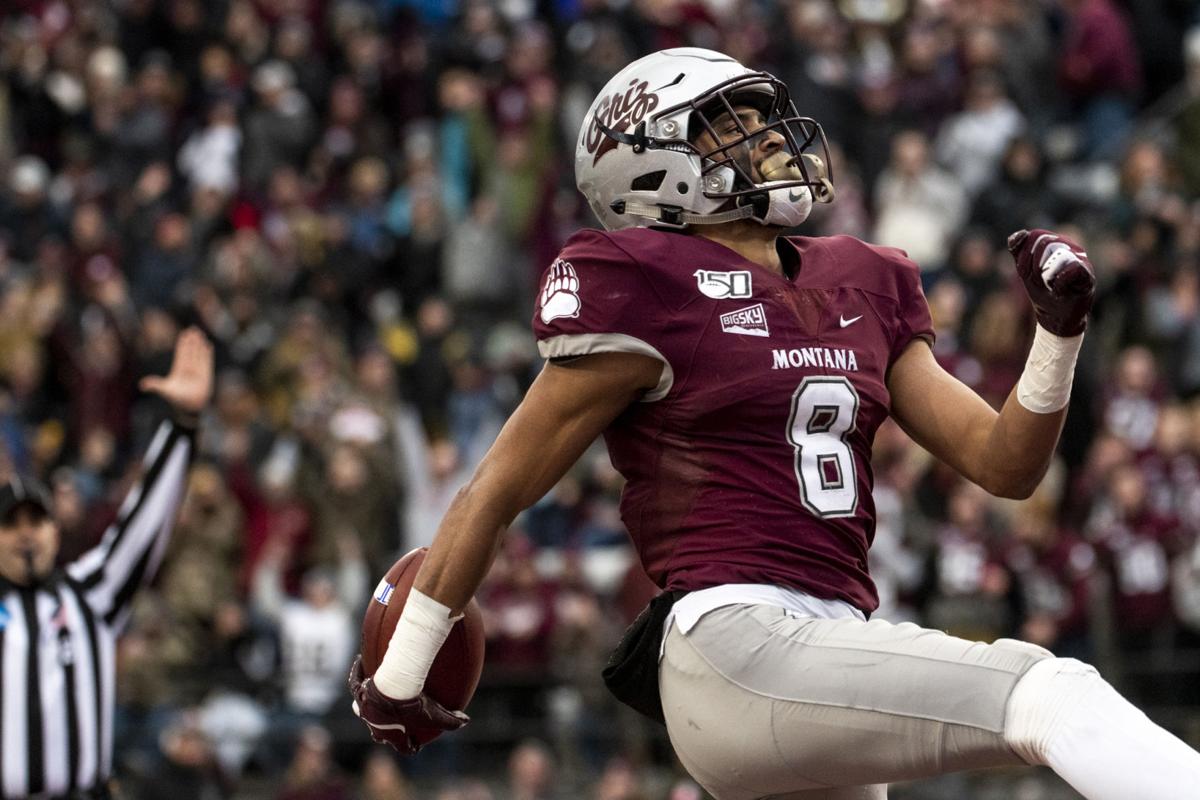 Montana's Samori Toure dances into the end zone after catching a pass and shaking Southeastern Louisiana's Dontrell Smith during their FCS playoff game at Washington-Grizzly Stadium in December. Toure was one of six Grizzlies named to the All-Big Sky Conference preseason team on Friday.

MISSOULA — Montana senior linebacker Jace Lewis was somewhat overshadowed by Buck Buchanan Award winner Dante Olson last year but still showed he had some chops of his own, collecting the third-most tackles in program history while filling up stat sheets throughout the season.

The Townsend native and former walk-on earned first-team All-Big Sky honors after his breakout season and was recognized by the league’s coaches as the Big Sky preseason defensive MVP on Friday during the second day of the Big Sky Football Kickoff.

“When I found out, I was pretty shocked, but it’s a great honor to get the recognition and stuff at the beginning of the season. I’m pretty happy about it,” said Lewis, a prime candidate to be the next Grizzly to wear the No. 37 legacy jersey.

He later added: “It’s a big honor and a lot to live up to, but like coach (Bobby) Hauck always says, let’s make it happen at the end of the season, too, instead of just the preseason.”

Lewis was one of six Grizzlies on the 33-player all-conference preseason team, which was revealed one day after the preseason polls, which both had UM second. Their six selections were tied for the second most in the league, showing the top-tier talent and depth that the Griz are cultivating under third-year head coach Bobby Hauck.

The depth has been apparent at linebacker over the years for the Griz. Lewis is the third consecutive UM linebacker to be named the Big Sky preseason defensive MVP, joining Olson in 2019 and Josh Buss in 2018, both of whom were All-Americans. Before then, there were other standout linebackers in Brock Coyle and Jordan Tripp, who went on to play in the NFL.

Lewis racked up 131 tackles last season playing next to Olson, who went out with a school-record 179 tackles in 2019 after setting the record at 151 in 2018. It was his first year as a starter after backing up Olson and Buss in previous years, and he showed his ability with 12 tackles for loss, 4.5 sacks, four passes defensed, two forced fumbles and one fumble recovery.

“I think it’s a trickle-down effect of just guys looking up to the people in front of them and crafting their game after each one that has come through,” Lewis said. “It’s cool to see all these players like Dante and Josh Buss. I was here with them. It’s pretty cool to see all three of us get the award and hopefully somebody else does next year, too.”

In addition to his teammates and parents, Lewis heavily credited defensive coordinator and linebackers coach Kent Baer with helping him develop over the past two seasons.

“Coach Baer, my position coach, helped me, developed me, made me smarter, know what to watch on film and critique little mistakes I was making to make me the player I am, so I’m very thankful for all that,” Lewis said.

He later added: “Coach Baer, again, I think has been the most influential to me. When that new coaching staff got here two years ago, he saw something in me and believed in me and he just pushed me to be the player I am. So I got to give him all the thanks. He definitely saw something in me, and I’m glad he did and took the time to coach me and prepare for this and stuff.”

Lewis needed that development after coming to UM from Townsend, a Class B high school, at about 200 pounds, he estimated. He’s now 6-foot-1 and 230 pounds, crediting strength and conditioning coach Matt Nicholson with helping him bulk up.

Lewis walked on with the Griz, the team he grew up watching at games inside Washington-Grizzly Stadium while envisioning himself playing on the field. He had played quarterback and linebacker in high school and went the defensive route in college, saying he liked hitting people more than learning a thicker offensive playbook.

“A lot of coaches around the state helped me get here,” Lewis said. “I just worked hard and kept my head down and kept grinding every day to get where I’m at right now. Hard work does pay off obviously. It’s nice because I came in as a walk-on, so I just felt like I had something to prove from the start.”

The only team with more selections than the Griz was Weber State with eight.

“We feel that we’ve really established a good depth at every position,” Bobby Hauck said. “We feel like we’ve made improvements at all the positions where we needed to.

“Certainly, when you have great players in the Buchanan Award winner going out in Dante Olson and then your starting quarterback, who was a great player before he got injured last year, when you have those guys going out the door, those are big holes to fill, but that’s college football. … That’s the nature of a good program is you’re able to retool every offseason and go out and compete and win.”

Robby Hauck joins Lewis as the only other preseason selection on defense. He was close behind Lewis, collecting 129 tackles, the fifth most in program history, to go with five tackles for loss and three sacks.

On offense, Toure is coming off a season in which he broke school records for receiving yards (1,495) and receptions (87). But he doesn’t feel much pressure to repeat that performance.

“Not at all,” Toure said. “Honestly, it’s the complete opposite. If anything, I felt a lot pressure going into last year because my redshirt sophomore season was disappointing for me, and I’m not going to lie, I lost a little bit of confidence just because I wasn’t performing as well as I could of. So, I felt like my junior year was like my make-it-or-break-it season. Like, I needed to prove myself now, and I felt like I did that. It was just a confidence booster for me, and now, I’m just ready to go out and play.”

Toure doesn’t need to carry the team at wide receiver because he’s paired up with Akem, who had his junior year cut short by an injury in November. Akem still earned second-team all-conference honors for the second time that season, grabbing 59 passes for 848 yards and five touchdowns after snagging 59 passes for 879 yards and 13 touchdowns in 2018.

Akem will be looking to go out with a strong senior season and earn first-team honors for the first time. He and Toure make a fearsome duo, and even though the Griz have to replace all-time receptions leader Jerry Louie-McGee, they have a handful of players who could step into that role.

“The success that we had last year, not just me but the rest of the wide receivers, we’ve all like really come a long way since we’ve gotten here,” Toure said. “Last year for all of us was honestly just a really big confidence booster. We always knew what we could do, but now that everybody else is starting to see how many weapons we have, it’s starting to look really good.”

Whoever steps in to replace quarterback Dalton Sneed and deliver passes to Toure and Akem will be helped by having Beaver on the offensive line. The third-year starter at left tackle is one of three returning starters on the line.

Montana’s recognition extended to special teams, where Flowers was recognized for his kick return prowess. He scored two kickoff return touchdowns last year, the second and third of his career, and he led the Big Sky in kick return yards and yards per return. It’s no surprise given he’s playing for Hauck, widely regarded as a special teams guru.

“When we first got here, we were scrambling to try to get a competitive starting lineup on the field,” Hauck said. “But when we’ve been good around here, we’ve had good depth. When we’ve had attrition and guys have gone down, the man coming in and picking up the flag has been capable and, in some cases, has exceeded, as he developed, the guy who was in front of him.

“It’s really important in my opinion, especially at this level, (because) we can potentially all play a lot of games. If you’re playing in the national championship game, you’re going to play 15 or 16 games depending on the year. That really takes a tremendous physical toll on your team. So, you have to have depth and you have to be able to overcome setbacks in the injury area.”

Around the Big Sky

Weber State, the preseason favorite in both polls, led the conference with eight selections. The Wildcats had one of the three unanimous selections in offensive lineman Ty Whitworth. The other players they placed on the team are offensive lineman Ben Bos, running back Josh Davis, fullback Clay Moss, punt returner Rashid Shaheed, defensive tackle Jared Scheiss, defensive end George Tarlas and defensive back Eddie Heckard.

Montana State had one of the three unanimous selections: offensive lineman Lewis Kidd. The Bobcats took another of the six offensive line slots with Taylor Tuiasosopo.

Portland State had one of the three unanimous selections: defensive back Anthony Adams. Special teamer Emmanuel Daigbe also made the team.

Bill Speltz: Missoula lost a piece of its heart when sports enthusiast Ray Nose passed away

Ten days ago, Missoula super fan Ray Nose died at the age of 70. There was a small blurb on the obituary page. He deserved a bigger splash.

Montana linebacker Jace Lewis (34) celebrates after a tackle on defense during the Grizzlies' second-round playoff win against Southeastern Louisiana in December at Washington-Grizzly Stadium. Lewis was named the Big Sky preseason defensive MVP on Friday.

Montana's Samori Toure dances into the end zone after catching a pass and shaking Southeastern Louisiana's Dontrell Smith during their FCS playoff game at Washington-Grizzly Stadium in December. Toure was one of six Grizzlies named to the All-Big Sky Conference preseason team on Friday.