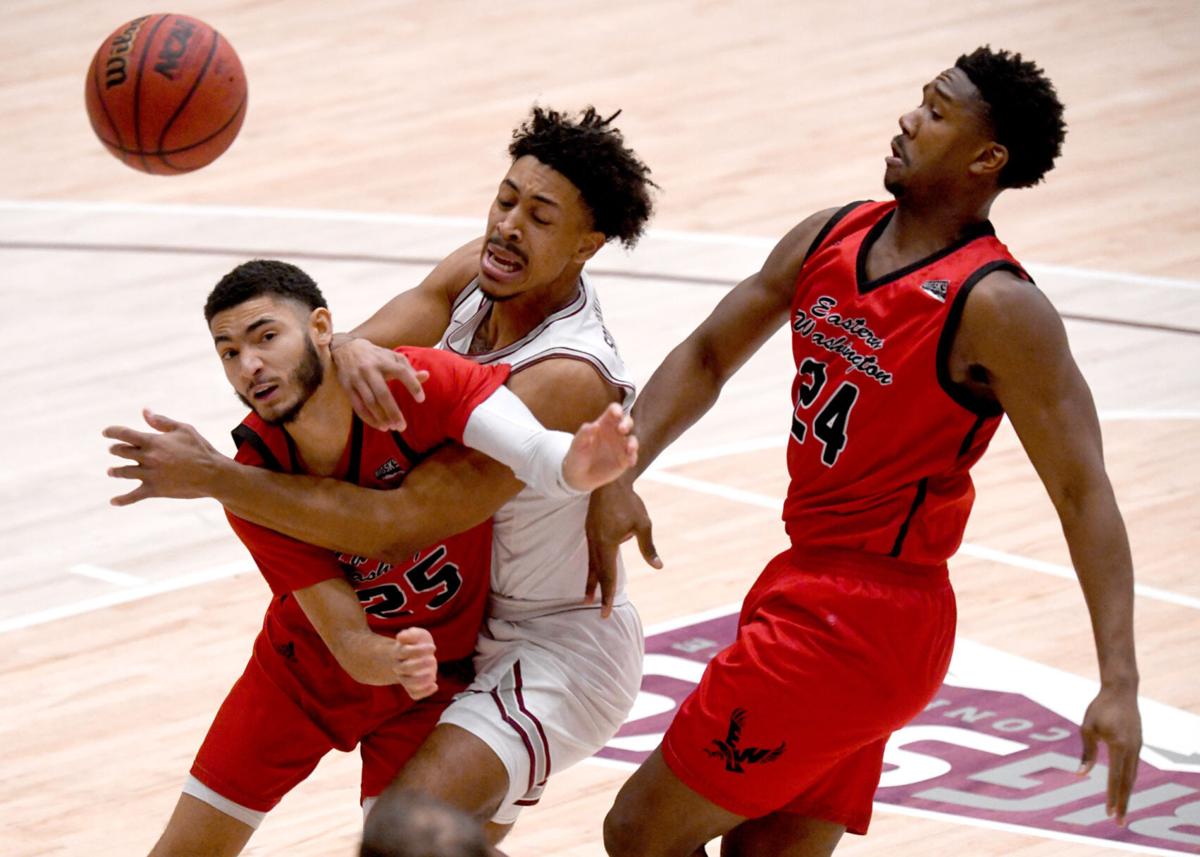 Montana’s Kyle Owens, middle, tries to gain possession of the ball against Eastern Washington’s Michael Meadows, left, and Kim Aiken Jr., right, during their basketball game on Saturday at Dahlberg Arena in Missoula. The Eagles defeated the Griz, 90-76, for the second game in a row. 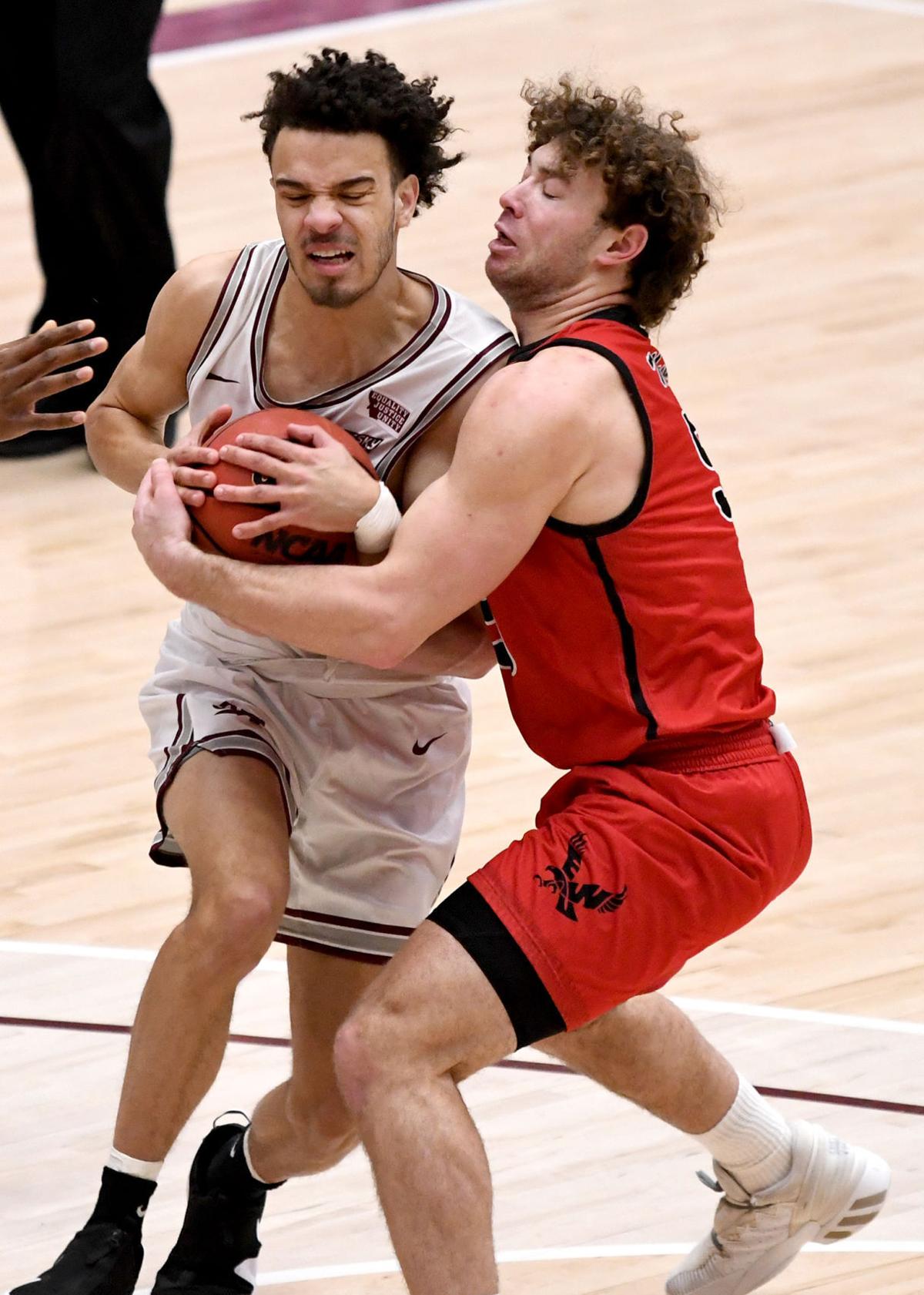 Montana’s Cameron Parker, left, drives into the lane against Eastern Washington’s Ellis Magnuson, right, during their basketball game on Saturday at Dahlberg Arena in Missoula. 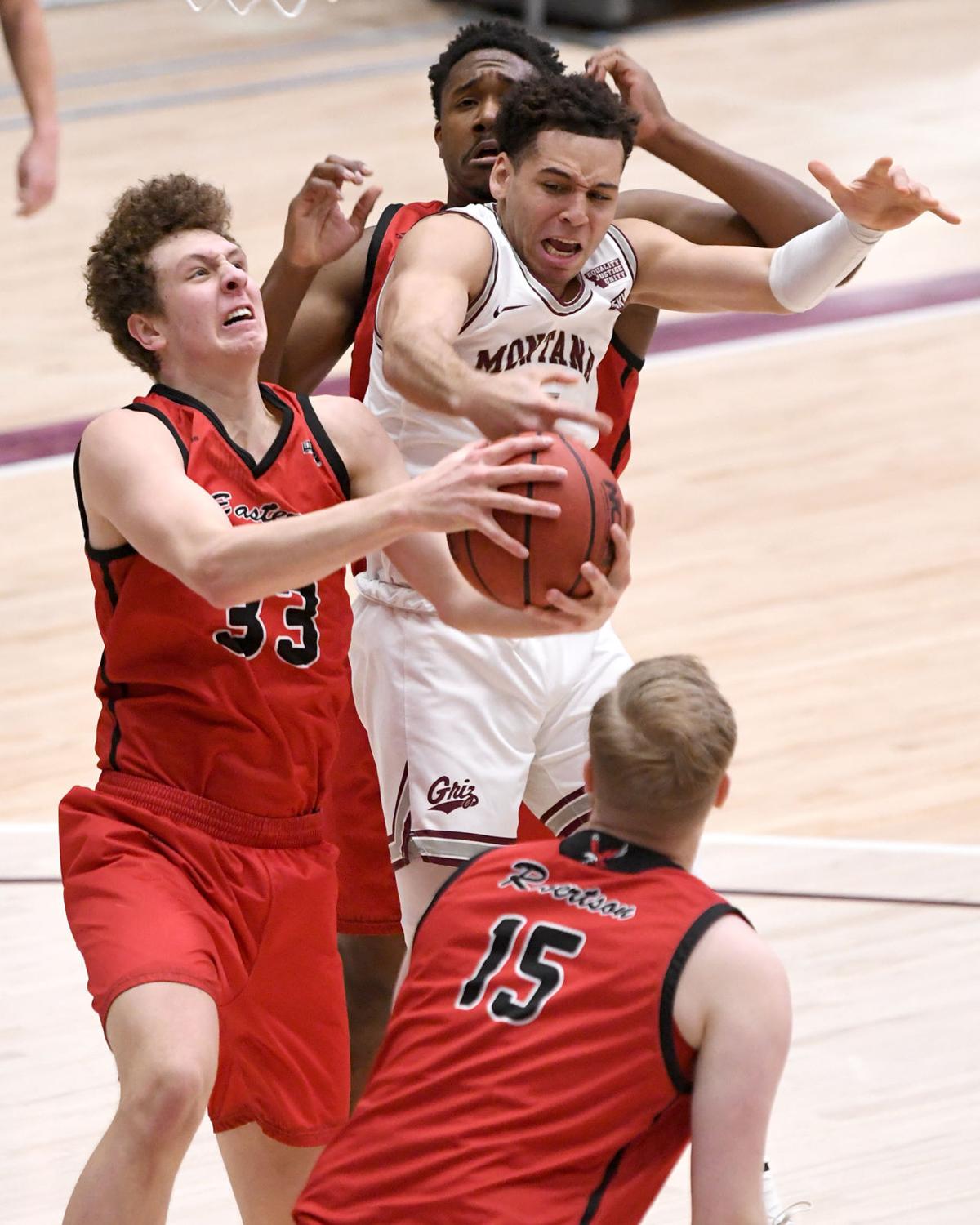 Montana’s Robby Beasley, right, goes for a rebound against Eastern Washington’s Jacob Groves, left, during their basketball game on Saturday at Dahlberg Arena in Missoula. 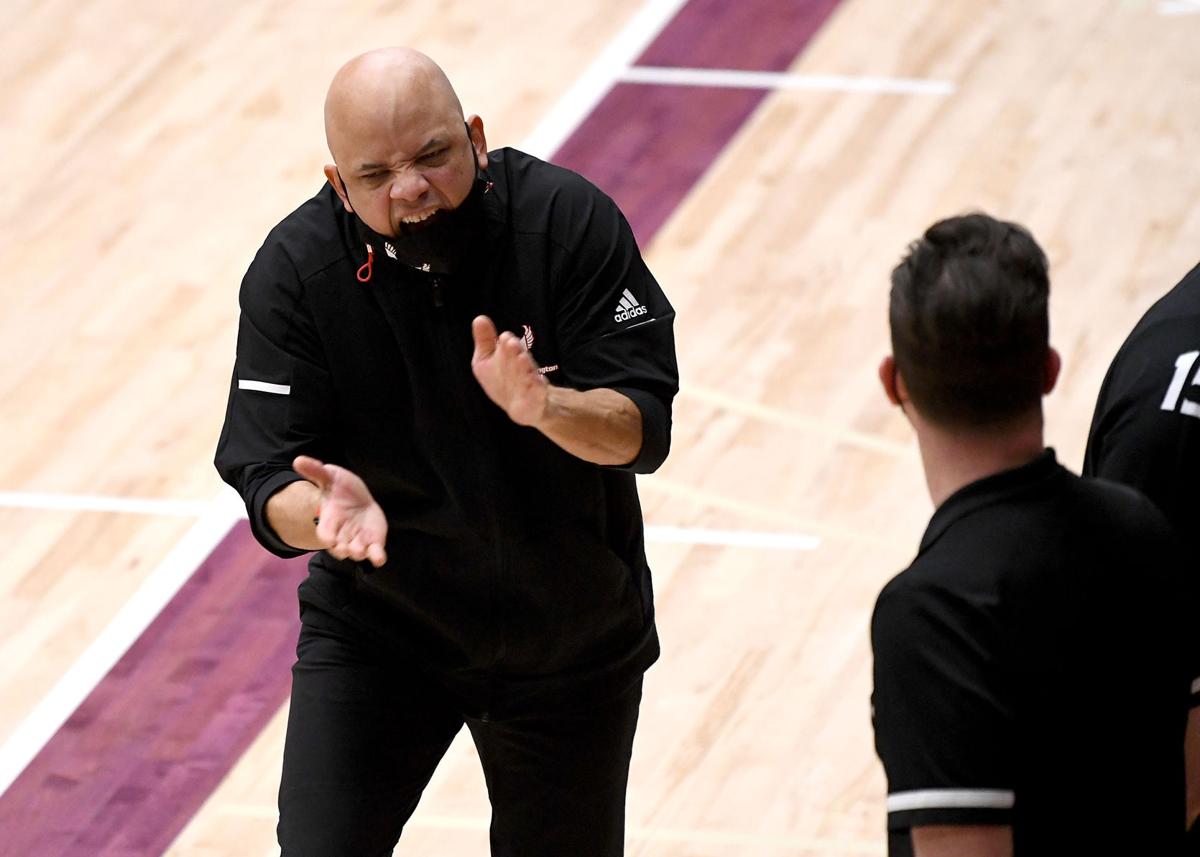 MISSOULA — Dejected might be the best way to describe the Montana men's basketball team right now.

Eastern Washington threw punch after punch in the first half of the Grizzlies' 90-76 loss on Saturday afternoon in Missoula in a game that played out almost identical to the first game of the series on Thursday in Cheney, Washington. The score, in fact, was identical in the two games.

It is the Eagles' first regular-season sweep in the series since 2003 and the first time since the 1969-70 season that Montana has given up 90 or more points in three straight games. The 14-point loss was the worst defeat in Dahlberg Arena under UM seventh-year coach Travis DeCuire.

Montana is guaranteed its first non-winning league record under DeCuire, and the Grizzlies' nine Big Sky losses are the most in his tenure.

There are 11 players left on the roster that was once 17 strong, and UM looked tired and discombobulated for long stretches in the two games against Eastern Washington. The remaining players have not quit — that was clear enough late in those two games, both of which featured late Grizzly runs to make the score look respectable — but there is a bit of frustration among a team many thought would finish near the top of the conference.

"It's one of two ways we can go about it, like, 'Hey, we have two more series left and we get bounced in the first round, it's a COVID year, whatever, blah, blah, blah,' or we can turn it around now and, you know, be positive," said junior guard Cameron Parker.

Positivity might keep the team together to finish out the year, but there is still a tough road ahead. Two home games against a solid Idaho State team loom, though the Grizzlies finish with winless Idaho to close out the season.

A mid-tier seed in the Big Sky tournament is still a possibility for Montana, and DeCuire has said several times over the past few weeks that he still feels like progress is being made.

And while that may be true, it was hard to see it this week against Eastern Washington. The Eagles have proven on their nine-game win streak that they are, probably by far, the best team in the Big Sky.

DeCuire said as much following the game and was asked if he felt like they were close to a breakthrough.

"Did you see a team that looked like they were ready to break through last week?" DeCuire asked the reporter who asked the question, who then said yes. "Sure. For sure. There's a difference between Weber and Eastern, they're two different teams, and teams match up differently with each other. And right now (Eastern) is a tough matchup for us that we'd have to figure out at our next opportunity.

"Right now, it's all about preparing for Idaho State."

Eastern Washington had first-half runs of 6-2, 6-0 and 10-0 to build its lead. Montana was held scoreless the final 3:19 of the first half, and the drought extended into the second half as UM did not make another field goal until the 16:22 mark of the final period.

During that time, Eastern Washington went on a 15-0 run to balloon the lead to 27 points and led by as many as 29 in the game. It was a similar story to the first game between the two teams on Thursday, when the Eagles raced out to a 47-20 lead.

The Grizzlies were in foul trouble for most of the first half. Mack Anderson and Eddy Egun each had three fouls in the first period, while Josh Bannan and Kyle Owens each had two.

Montana finished with 23 fouls, while Eastern Washington was called for 22. Owens and Anderson fouled out for the Grizzlies.

Bannan led Montana with 20 points and nine rebounds in 25 minutes. Freshman Robby Beasley added 16 points in 35 minutes and started the game, his third start of the year.

"Defensively, when you give up 90 points, there's a lot of issues," Bannan said. "The big guys, we were just letting them get into a rhythm. We need to be a bit more disruptive on the defensive end."

NOTES: Kim Aiken Jr. scored 28 points on 14 shots and added 10 rebounds to lead Eastern Washington ... Cameron Parker had a double-double with 12 points and 10 assists while adding three rebounds for the Griz ... Mack Anderson had three blocks for UM ... The Grizzlies shot 25 of 57 from the field and 20 of 24 from free throw line ... Montana had just nine turnovers, while the Eagles had six ... UM is 9-12 on the season and 5-9 in Big Sky play.

Jordan Hansen covers a bunch of stuff for the Missoulian and 406 Sports. Shout at him on Twitter @jordyhansen or shoot him an email at Jordan.Hansen@406mtsports.com

The Montana men's basketball team snapped a three-game losing streak by overcoming some late-game drama to beat on Idaho State on the road.

The Montana men's basketball team collected its first sweep of the season by rallying in the final seconds against Idaho State after coughing up a double-digit lead.

MISSOULA — Without a wealth of experience off the bench, the Montana women's basketball team struggled to keep pace with Idaho State Saturday.

'Compete like it matters': Montana Grizzlies shoot for 1st sweep of season in Game 2 against Idaho State

The Montana men's basketball team is aiming for its first sweep of the season when it takes on Idaho State in game two of its series Saturday.

The Montana women's basketball team will be out for revenge when they host Idaho State on Saturday at noon. The Bengals beat the Lady Griz by 30 points Thursday night.

MISSOULA — Montana senior Julia Ronney has been named the Big Sky Conference women's tennis Player of the Week after posting one of the league's biggest singles upsets of the year, the league announced Tuesday.

The Montana softball team wrapped up play at the Dixie State Classic with a 6-5 loss to Nevada in eight innings Sunday in St. George, Utah.

Montana’s Kyle Owens, middle, tries to gain possession of the ball against Eastern Washington’s Michael Meadows, left, and Kim Aiken Jr., right, during their basketball game on Saturday at Dahlberg Arena in Missoula. The Eagles defeated the Griz, 90-76, for the second game in a row.

Montana’s Cameron Parker, left, drives into the lane against Eastern Washington’s Ellis Magnuson, right, during their basketball game on Saturday at Dahlberg Arena in Missoula.

Montana’s Robby Beasley, right, goes for a rebound against Eastern Washington’s Jacob Groves, left, during their basketball game on Saturday at Dahlberg Arena in Missoula.