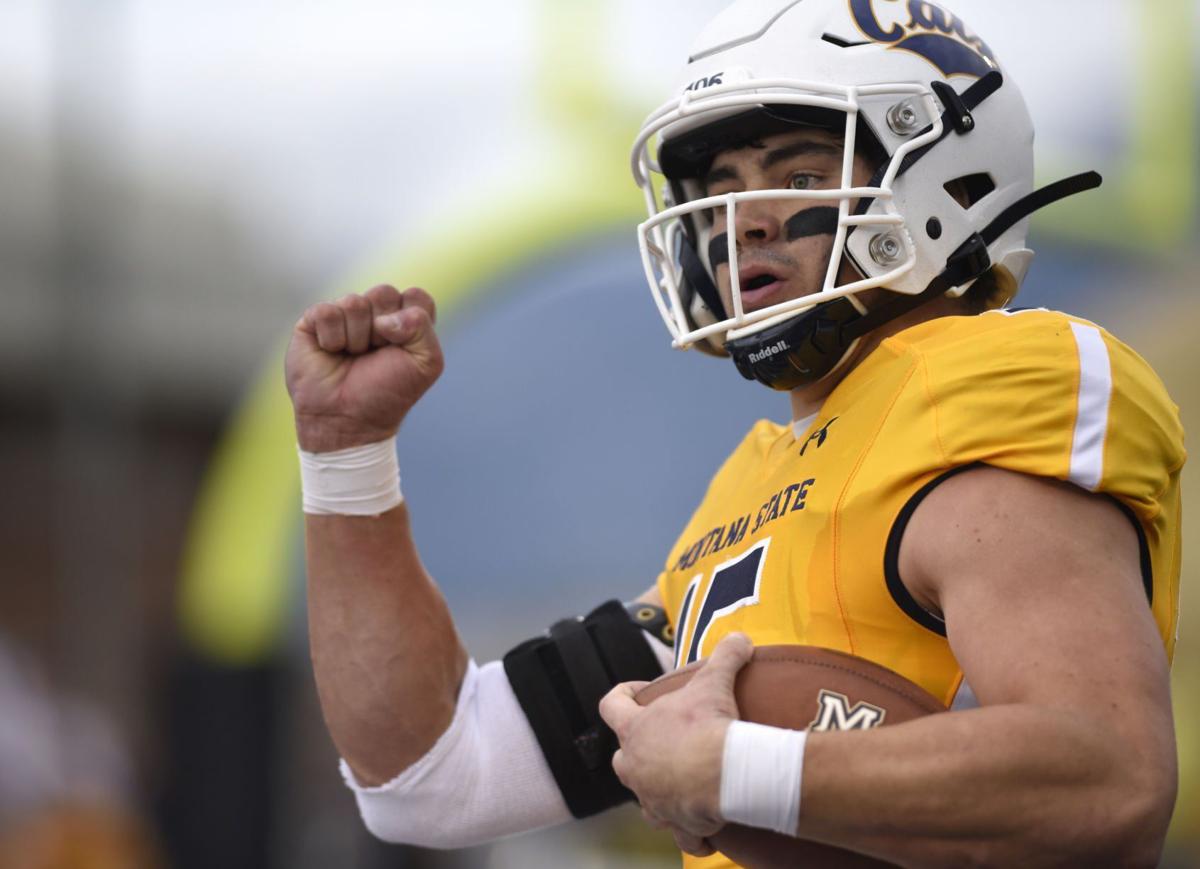 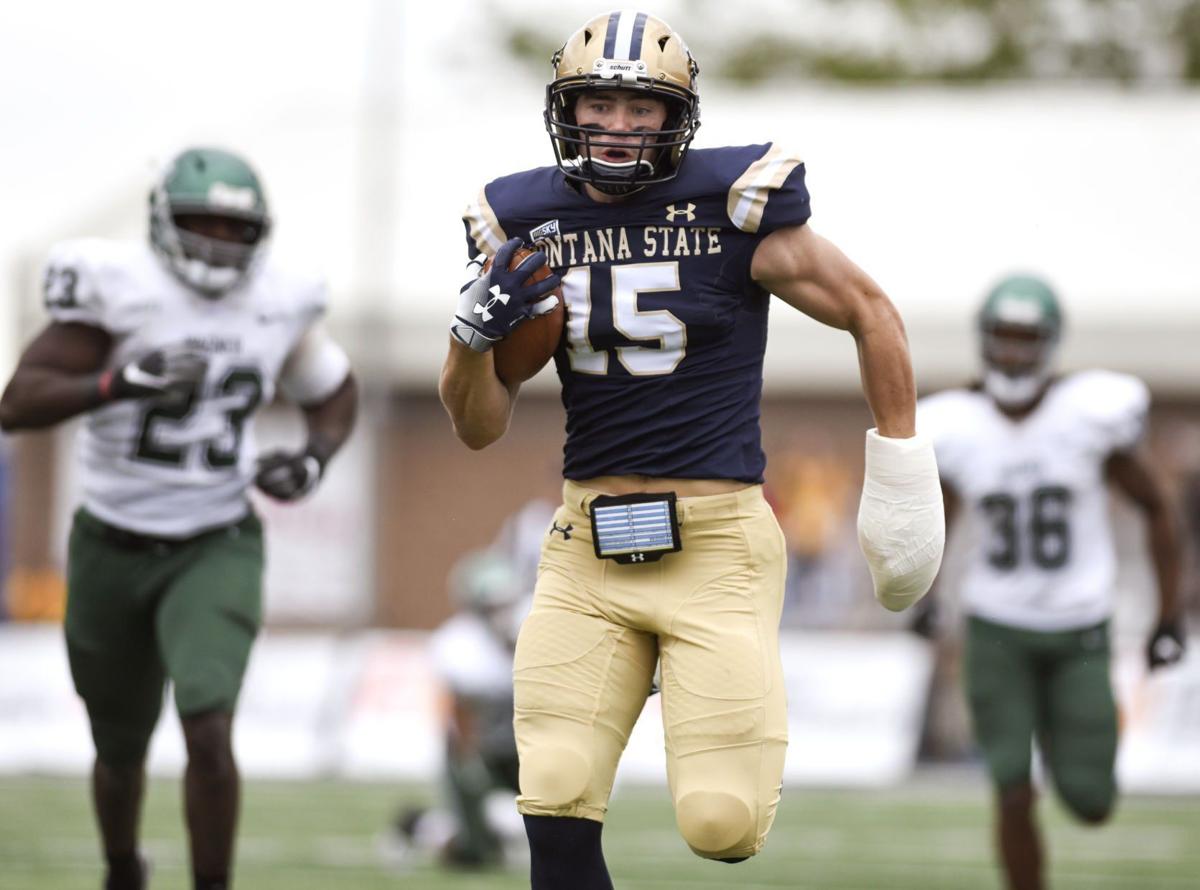 Editor’s note: This is the first of a three-part series about Montana State all-American Troy Andersen. The second part will publish in print Nov. 27 and the third will publish Nov. 28.

BOZEMAN — If Troy Andersen thought it was best, he was willing to give a position switch a try.

The Montana State football team's coaching staff initially told the Dillon native he likely wasn’t fit to be a college quarterback, the position Andersen played and loved. Instead, the Bobcats viewed him as a linebacker.

Changes at MSU during the offseason led then-Bobcats head coach Jeff Choate to ask if Andersen would be comfortable at running back. He was unsure. Robertson emphasized the faith the Bobcats had in him.

“If you guys think I can do it,” Robertson recalled Andersen saying, “I’ll give it a try, if that’s what you need me to do.”

This unselfish approach has catapulted Andersen to MSU stardom. Robertson never imagined he would become an all-American on offense and defense along with countless accolades in his career. Neither did Andersen.

“I was just excited to have a scholarship to play football here, let alone to be able to play early and then have the success that I've had,” Andersen said. “It's been awesome. I'm extremely blessed and lucky and don't take it for granted. It's been a really awesome time.”

When Choate was asked if Andersen has professional potential, his answer was swift.

“Oh yeah,” the current co-defensive coordinator at Texas responded. “That’s what they look like.”

Andersen’s capabilities were clear when he arrived on campus. Robertson recalled his first few scrimmages. When the ball was in his hands, he refused to be taken down.

“He’s relentless,” Robertson added. “Being able to have the lower-body strength at that time as a freshman, being able to do some of the things he did was pretty impressive.”

With a laugh, Bobcats defensive back Ty Okada claimed Andersen is the fastest on the team. Especially in a 40-yard dash, once he gains momentum, his power makes him difficult to keep up with.

Okada recalled Andersen knocking someone out with his knee as the player was trying to tackle him. For most, Okada imagines taking down Andersen is “crazy tough.”

MSU defensive end Amandre Williams said when the team holds vertical leap tests, Andersen might not even be warmed up and could “jump out of the gym.”

“It's insane to watch him do some of the things he does,” Williams said. “Obviously a fantastic football player, could play any position on the football field.”

Okada said Andersen’s positional versatility is uncommon simply because no one quite has the skills he does. That includes the intelligence required to learn multiple positions, let alone four, over the course of his Bobcats career.

“He's just built differently, man,” MSU linebacker Callahan O’Reilly said. “You don't see a lot of guys at 6-foot-4, 240 (pounds) move like that. And on top of it, he's an extremely smart kid.”

Andersen was named Big Sky freshman of the year while primarily playing running back in 2017. With 90 carries, he totaled 515 yards and five touchdowns. He rushed for 100 yards in a game in just his third outing, the quickest a Bobcat has ever done so. He added nine tackles and a sack on defense, as he started games at linebacker and running back.

Going into the 2018 season, MSU announced incumbent starting quarterback Chris Murray would miss the year because of academics. This was less than a month before fall camp.

When Robertson posed Andersen with the idea of moving behind center, he was unsure again.

“Sure enough, he does a heck of a job,” Robertson said.

Bobcats running back Isaiah Ifanse also rushed for 1,000 yards that season, the first freshman to do so at MSU. He had heard stories about Andersen as he was being recruited. Then he saw his talent up close.

“Just amazing,” Ifanse said. “I was just like, ‘Wow, this dude is a freak.’ So it’s been awesome playing with him for the past four years.”

While Andersen is third at MSU with 1,412 rushing yards in one season, he steadily improved as a passer as the year went on.

The Bobcats shuffled the offensive coaching staff midseason. Before that move, Andersen completed 52.6% of his throws. He hit 60.8% for the rest of the regular season.

One of the highlight moments of his sophomore campaign was leading the Bobcats to a comeback win at rival Montana after trailing by 22 points. Following a touchdown in the fourth quarter to close the gap to one possession, Andersen hushed the Grizzlies crowd.

MSU linebackers coach Bobby Daly had to game plan against Andersen that season when he was at Idaho. He fully realizes how difficult Andersen is to defend.

“He's extremely fast. He's extremely strong,” Daly said. “He's a very unique individual. I can't think of anybody that's put together a resume quite like his.”

The following season, Andersen was moved back to outside linebacker, the position he preferred.

Again, he was an all-American and all-Big Sky first-teamer. He accumulated 54 tackles, 11 1/2 for loss, as well as 6 1/2 sacks, an interception and five pass breakups.

But he also served as a wildcat quarterback. On 49 attempts, he rushed for 336 yards and a team-high seven TDs on 6.9 yards per carry.

But that considerable workload eventually led to a season-ending knee injury. Ensuing surgery would’ve forced him to redshirt in the 2020 season if the coronavirus pandemic hadn’t led to MSU not playing for nearly two years.

When Bobcats head coach Brent Vigen took over, Andersen was again on the move. And again, he’s flourished. He was named Big Sky defensive player of the year earlier this week.

Through this regular season, he has 111 tackles, 9 1/2 for loss, with two sacks. He’s eighth in the FCS in tackles per game, and he’s powered the Bobcats to becoming the third-best scoring defense in the country with 13.2 points per game allowed. He also has two picks, one he returned for a touchdown on Sept. 18 against San Diego, with seven pass breakups and a fumble recovery.

When Andersen returned that interception to the end zone, MSU offensive lineman Lewis Kidd felt like the moment was something out of a movie.

Trying to designate his most athletic feat, Kidd said, is too difficult to pin down.

“You're not putting a better X out there when you're talking Xs and Os,” Vigen said. “Just appreciate his continued efforts.”

Okada complimented Andersen for his instincts. They allow him to become accustomed to new roles quickly. He doesn’t know many middle linebackers who also have 33 career touchdowns, second all-time at MSU.

“He plays well every game,” MSU defensive coordinator Freddie Banks said. “He tackles well and is really dialed into the game plan.”

Daly lauded Andersen for the strides he’s made from fall camp, when he was taking his first snaps at inside linebacker, to now.

Daly enjoys teaching Andersen because of his mindset. Even though he’s an all-American, he doesn’t act like he knows everything. He’s constantly asking Daly for ways to improve.

Andersen is often the first one to MSU’s meetings. He’s usually watched film of the day’s practice twice before his teammates watch it together as a group.

Andersen doesn’t even need mistakes to be pointed out to him in the film room. Daly said he usually catches those himself. Andersen, Daly said, is his own harshest critic.

“Any opportunity that he can go out there and help us win a football game, he wants to,” Vigen said. “He's a guy that, whether it's in the classroom or on the field, he can get by just on his ability, but he doesn't treat it that way. He's right up there as far as the complete package as far as guys that I've been around.”

Daly, though, said Andersen “hasn’t even scratched the surface” regarding his potential. That’s partially because of his constant positional transitions. He hasn’t had the time to hone in on one spot and work toward mastering it.

Dane Brugler, an NFL Draft analyst for The Athletic, reported some West Coast scouts believe Andersen would be selected in the top 100 in April. Daly said professional representatives are speaking to him about Andersen “every day.” And the coach often tells them Andersen still has a greater potential once he has a shot to focus on one position.

Okada said NFL general managers should be “licking their chops” trying to add Andersen to their teams.

“I think people don't really quite comprehend how talented Troy Andersen really is because they've seen him do so many things,” said Kane Ioane, who was MSU’s defensive coordinator in 2019 and is now a co-defensive coordinator at Boise State. “You probably think it's crazy to say, but his potential is still so high, his ceiling is still so high when it comes to playing this game of football.

“He still has so much he can even do because of not only obviously his athletic ability but his work ethic, his desire to be great. … It's pretty dang phenomenal to watch.”

Because of all the impacts Andersen has made in so many ways, Daly said he would place Andersen on the Mount Rushmore of all-time great Bobcats.

Daly, a Helena native, was an all-American at MSU himself. If Andersen won the Buck Buchanan Award this season, would he deserve to be regarded as the best Bobcat of all time? Daly wouldn’t have any arguments.

“Troy is going to be arguably one of the best to do it in the Blue and Gold, and the way he's gone about it, there's no one that is in comparison,” said Ioane, a four-time all-American for the Bobcats. “There's no one that has played and had the effect in multiple positions the way he has.”

Okada pointed out Andersen may not be remembered for being an all-time great decades from now because he won’t own as many records as he could have if he had played one position his entire career. That’s fine with Andersen. All along, he emphasized helping the Bobcats however he could, at whatever position he could.

When asked where he could see himself playing professionally, Andersen said he would be open to lining up anywhere that would help his team.

Mellott had ankle surgery earlier this week in Bozeman.

Beasley is a guard from Australia.

Potter is from Boise and spent time with the Broncos as a player and coach.

Hamilton and Wilson have each won the awards multiple times.

After two weeks off, the Bobcats will play three games in five days.

After 16-day layoff, Montana State women return to action with win over Idaho 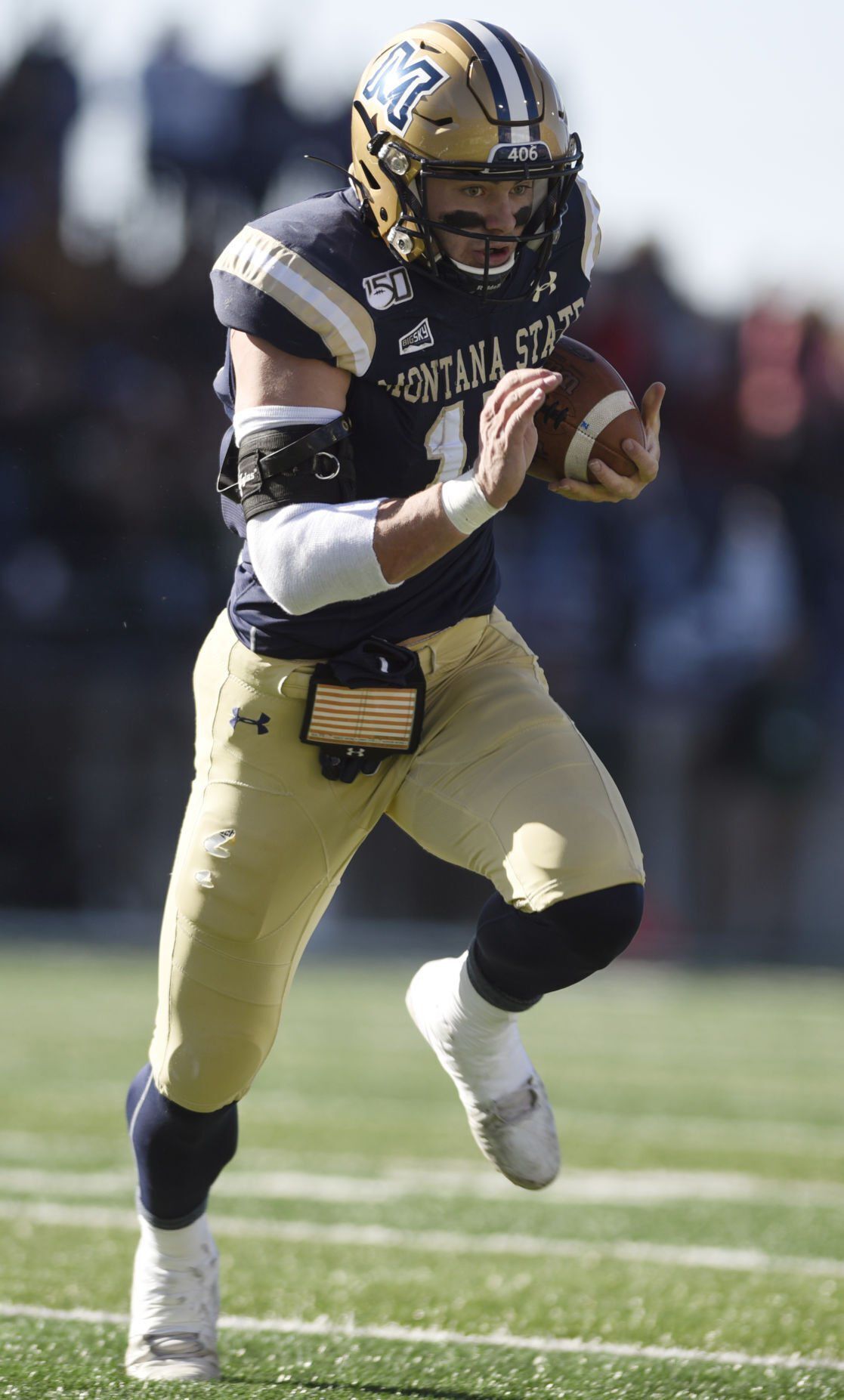 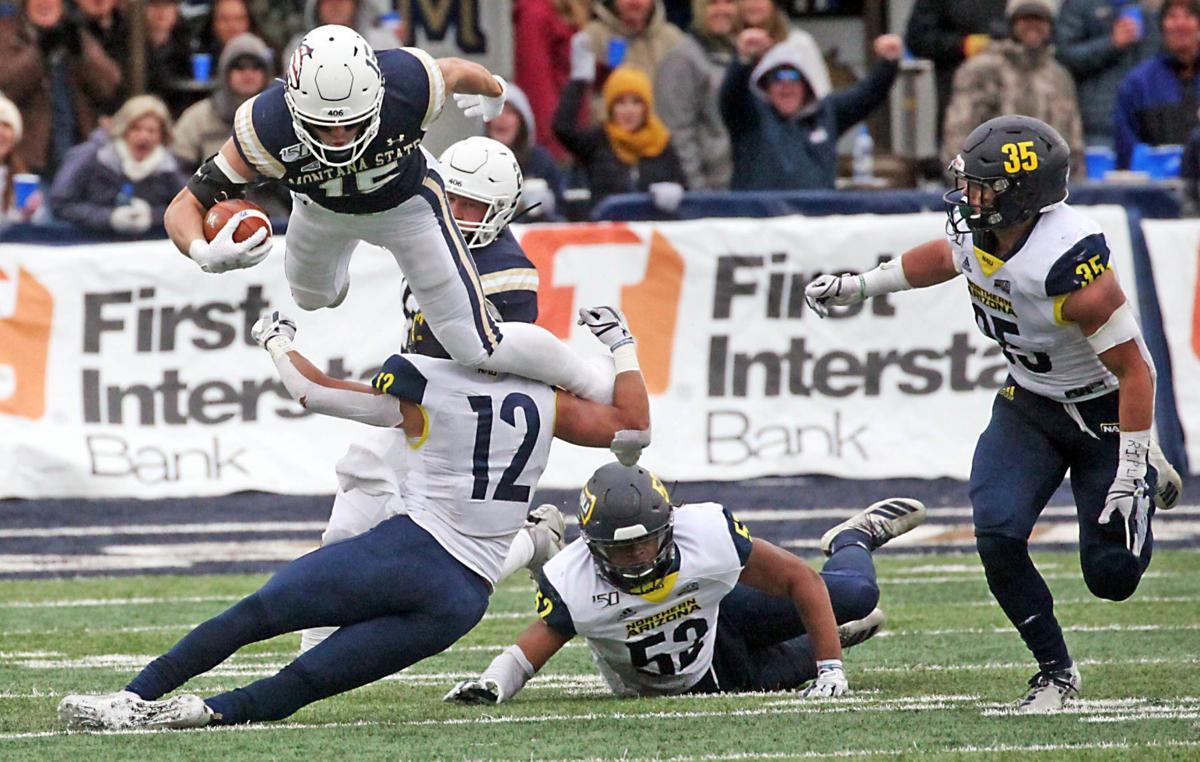 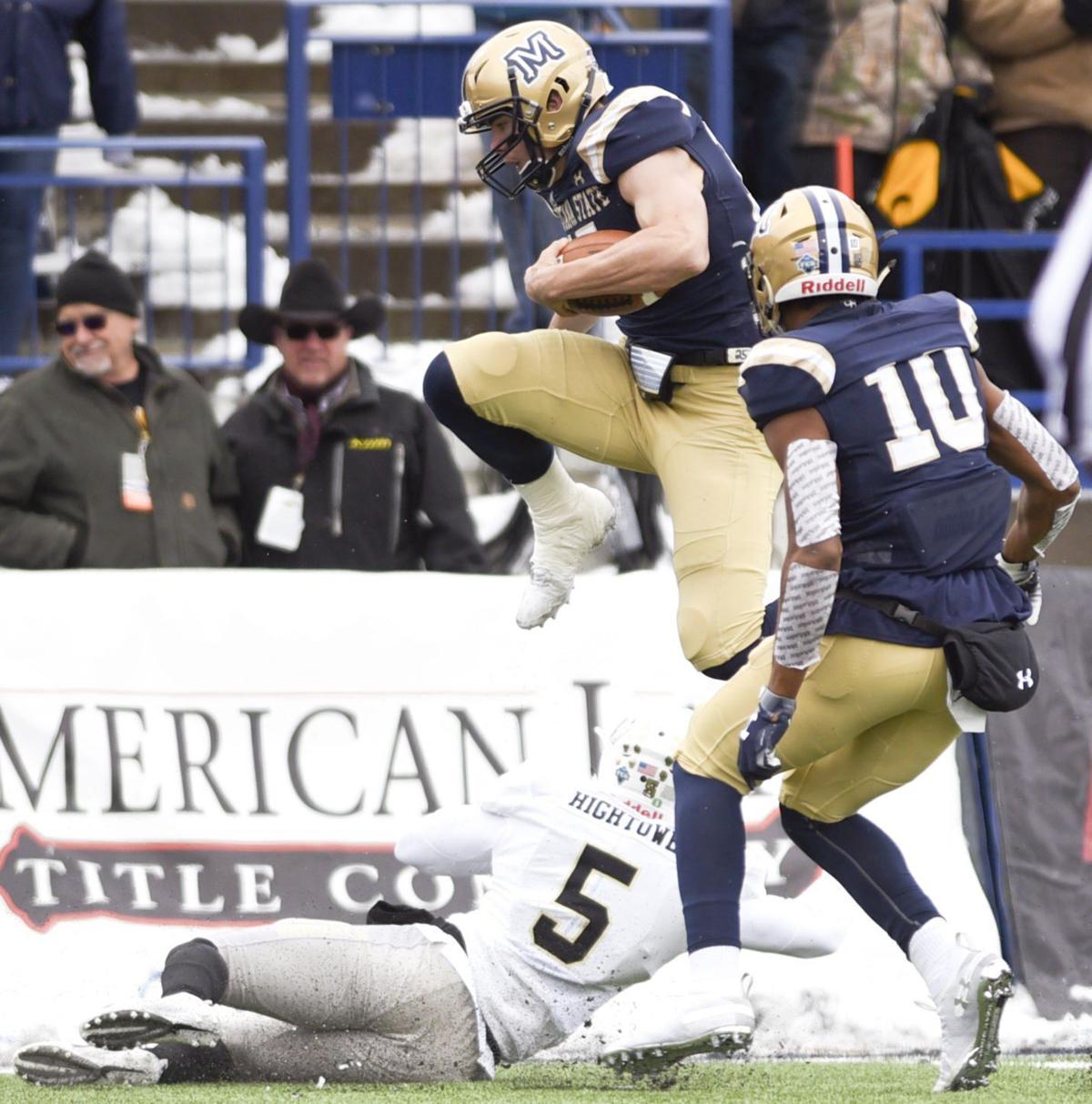 Montana State's Troy Andersen leaps over Idaho’s Lloyd Hightower for a touchdown in 2018 at Bobcat Stadium. 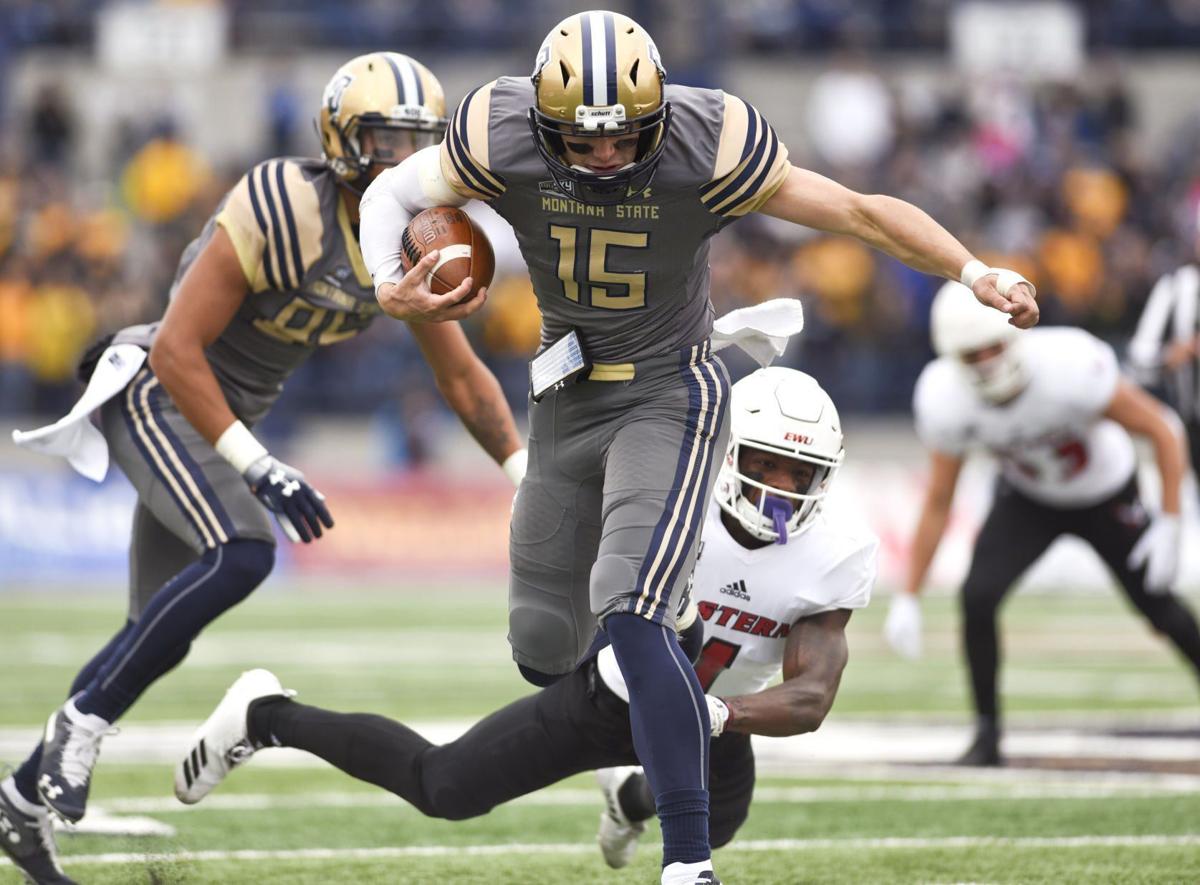 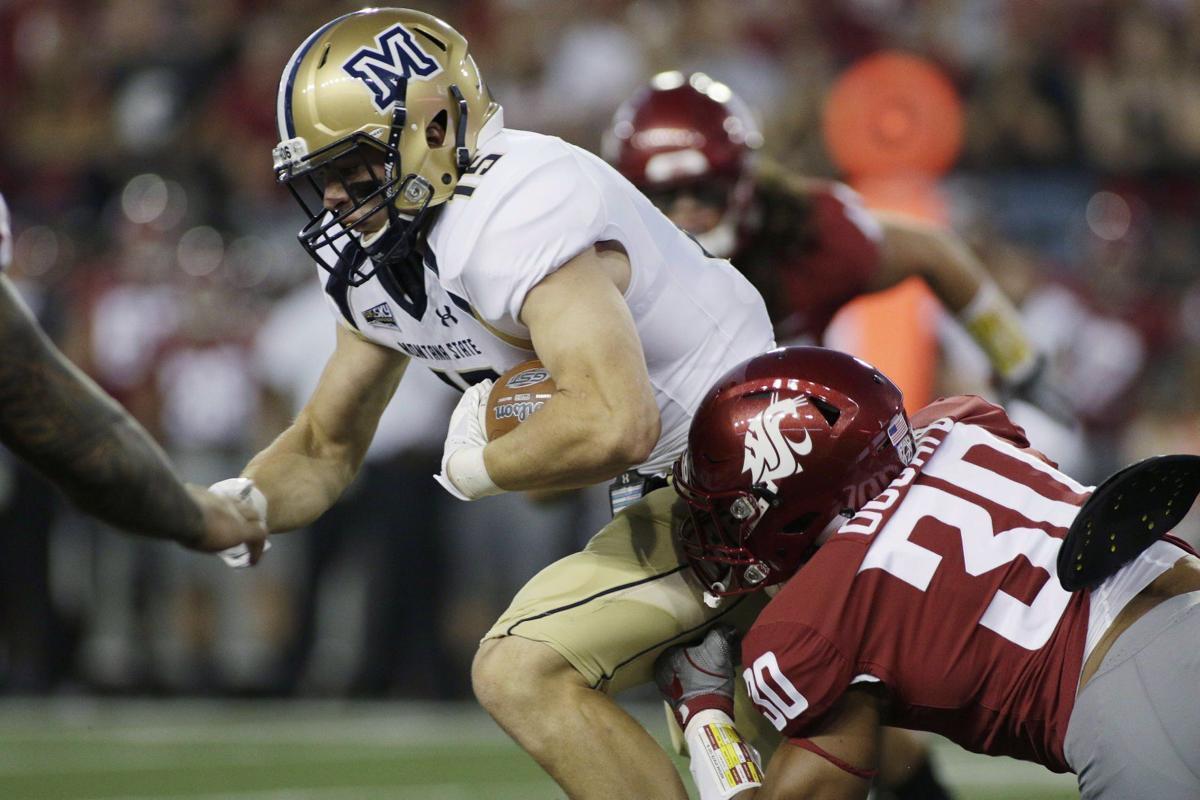