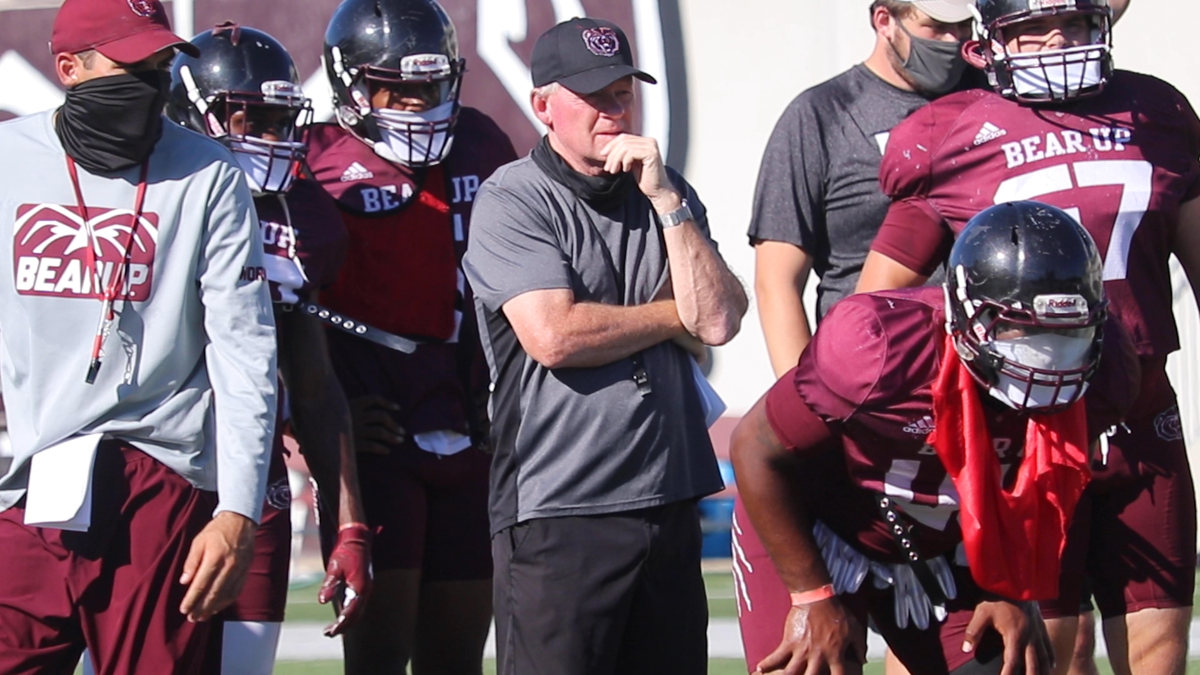 Montana native Bobby Petrino looks on while his Missouri State football team practices. The 59-year-old is in his first season coaching the FCS-level Bears after stints in the NFL and SEC, among other stops. 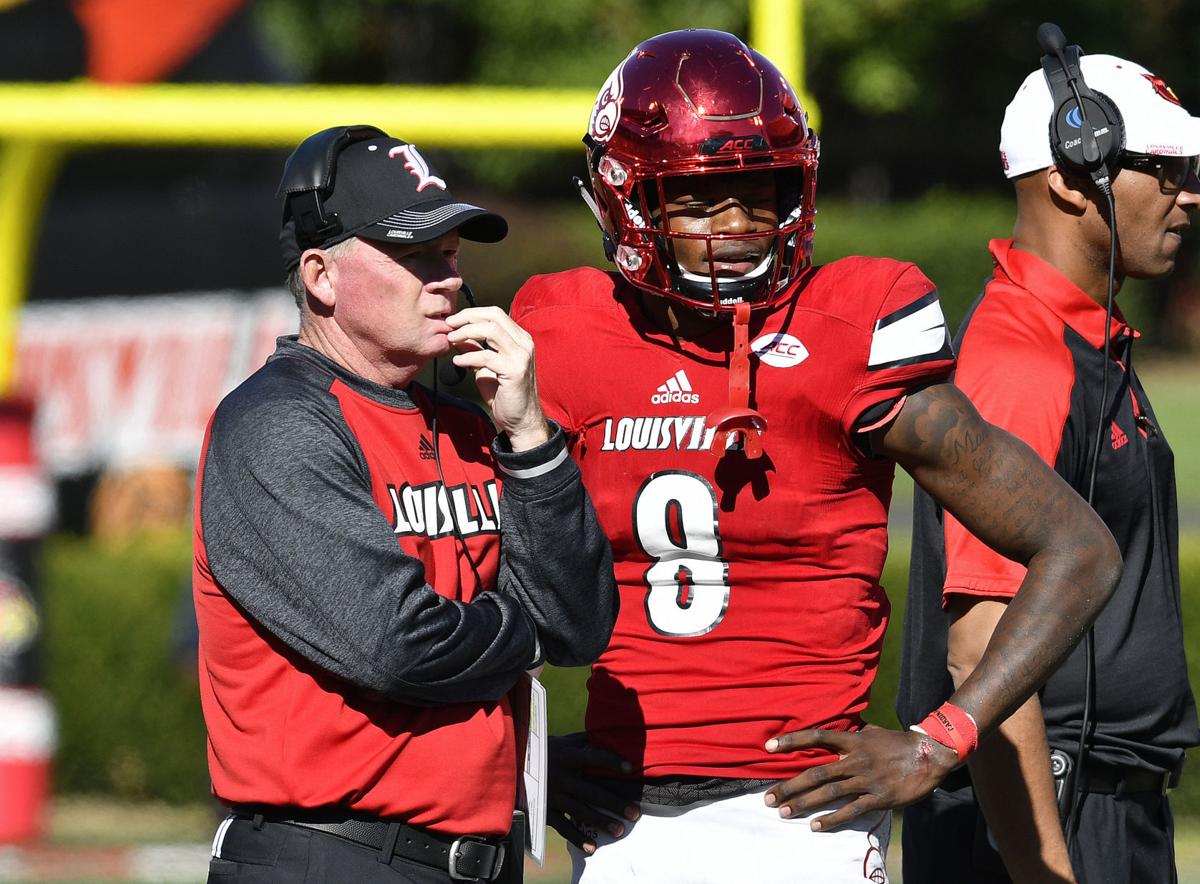 MISSOULA — Missouri State doesn’t have the glitz and glamour of the NFL or the SEC, but Bobby Petrino is grateful just to be part of a football team again.

The Montana native spent the 2019 season out of coaching. It was the just the second time since 1983 that he went through the fall without being part of a coaching staff.

Petrino, known for his offense, spent six months of his year away from football writing a book: “Inside the Pocket: An In Depth Analysis of the Xs & Os.” He also worked on his golf game, visited Central Michigan, where Missoula native Jim McElwain is coaching and his son-in-law Ryan Beard was coaching, and watched his son Nick Petrino coach at Tennessee Martin.

It ultimately wasn’t a satisfactory experience for the competitor who went from small-town Montana to the highest levels of football. He wasn’t ready to experience another year away from the game, and now, coaching again, he’s feeling rejuvenated.

“I’ve never felt like this is a job,” said Petrino, who was supposed to face the Montana Grizzlies this fall before the season was postponed. “I feel like this is just part of my life and a way of life.”

Petrino has come full circle in a sense, coaching again the FCS after climbing the ladder to the Atlanta Falcons, Arkansas and Louisville, among other stops.

In the FCS, there’s a mix of players on full scholarships, partial scholarships and walk-ons, some of whom are balancing football and school with work. Not every player is trying to make the NFL either, focusing more on their post-playing days while still committed to winning games.

“I really feel like maybe you make a more significant difference in young men’s lives here,” Petrino said, “because it’s the true experience of college athletics.”

Born in Lewistown, he saw that at a young age while watching his father Bob Petrino Sr. coach as he grew up in Butte and moved in fifth grade to Helena, which he considers his hometown. He also enjoyed seeing how Mike Montgomery coached the Griz basketball team and knew at a young age he wanted to get into coaching.

Petrino got his start in FCS coaching with Weber State and Idaho in the late 1980s and early 1990s for coaches Mike Price and John L. Smith. He never lost a game in his home state when coaching against UM and MSU but recalled having trouble creating an offensive game plan to beat Griz safety Tim Hauck, who he called “the best safety I’ve ever gone against.”

“I think the way I grew up being around football and being able to walk from my grade school over to my dad’s practice field, I just felt like I knew what I was going to do at a real young age,” said Petrino, a cousin of first-year Montana Lady Griz coach Mike Petrino.

Renowned for his offensive prowess, Petrino started studying offenses at a young age. He learned his father's triple-option offense around 10 years old and won a state title at Helena Capital before playing quarterback for him at Carroll College, eventually jumping right into coaching and starting his career there.

Petrino’s acumen running the power spread led him from the FCS to Arizona State, Nevada, Utah State, Louisville, the Jacksonville Jaguars and Auburn. He got his first shot as a head coach in 2003 at Louisville, spent 2007 as head coach of the Atlanta Falcons but left for Arkansas, where he unsuccessfully tried to recruit Helena native Matt Miller, after having signed a five-year contract with the NFL team.

“I think the No. 1 thing I’ve learned is it’s the same game no matter what level you’re at,” said Petrino, whose brother Paul Petrino coaches Idaho. “Junior high, high school, small college, major college, the X’s and O’s and how to teach and prepare, it’s the exact same game. The thing that makes it different is the crowds and support of the fans and students.”

His time at Arkansas ended after a motorcycle accident in April 2012 led to the surfacing of his extra-marital affair with an athletic department employee, about which he reportedly misled the school.

After a year away, Petrino got a shot at Western Kentucky and parlayed the successful season into a return to Louisville in 2014, helping quarterback Lamar Jackson win the Heisman Trophy. A poor 2018 resulted in his ousting and a second season away from the game that decade.

Missouri State is now the 13th coaching stop for Petrino in a career that saw his family forced to move around the country, sticking at most places for one or two seasons in 35 years. What's also now come full circle is his kids have kids, and he gets to spend time with them and spoil them.

Missouri State is scheduled to play in Missoula in 2024. That would be Petrino’s fifth year with the Bears, which would tie his longest tenure at any school.

Petrino's goal in his five-year plan at Missouri State is to win an FCS title. That presents numerous challenges, even for a coach of Petrino’s stature, because the Missouri Valley Football Conference is loaded and headlined by perennial national power North Dakota State.

Petrino, though, is not scared of the challenge.

“It’s really awesome,” he said. “It reminds me of when I got to coach in the SEC, where each week you’re playing against really good players and really well-coached teams. There’s nothing better than that type of challenge.”

Petrino’s team was one of the dozen or so in the FCS to play games this fall. They went 0-3, but he feels the practices and games have helped his team grow.

Now 59 years old, he hasn’t put a timetable on his coaching career, hoping to stay in the game as long as he’s wanted and as long as he has the passion. For now, both those boxes are checked.

“I’m enjoying not only coaching the players but working with the young coaches and trying to help them develop and progress their careers and giving them opportunities,” Petrino said. “I think that’s so much fun. If I don’t enjoy it, I’ll get out of it. But right now, I’m enjoying it and having a lot of fun.”

Hamilton's converted mark is the third best in Montana State history in the mile, behind Patrick Casey and Cristian Soratos.

Montana men's basketball again falls to Eastern Washington, has now given up 90+ points in three-straight games — the first time in 50 years that has happened

Versatility counts, and Kunkel knows what it takes to win games — and the hearts and minds of her coaches and teammates.

Bill Speltz: Grizzly club hockey upgrade great coup for the U (of Montana)

"I look at this as nothing but a benefit to the university," Montana Grizzly hockey organizer Tucker Sargent, on the recruiting payoff for upgrading to a competitive ACHA club program.

MISSOULA — Maybe it wasn't such a coincidence Montana's Abby Anderson had a monster game against Eastern Washington Thursday.

Brent Vigen has brought in three new coaches and is retaining seven others from Jeff Choate's staff.

Montana native Bobby Petrino looks on while his Missouri State football team practices. The 59-year-old is in his first season coaching the FCS-level Bears after stints in the NFL and SEC, among other stops. 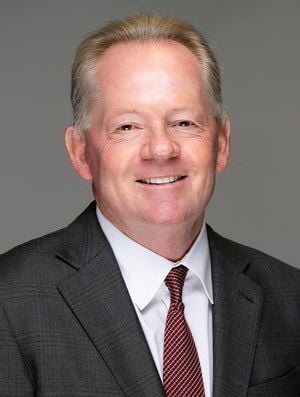