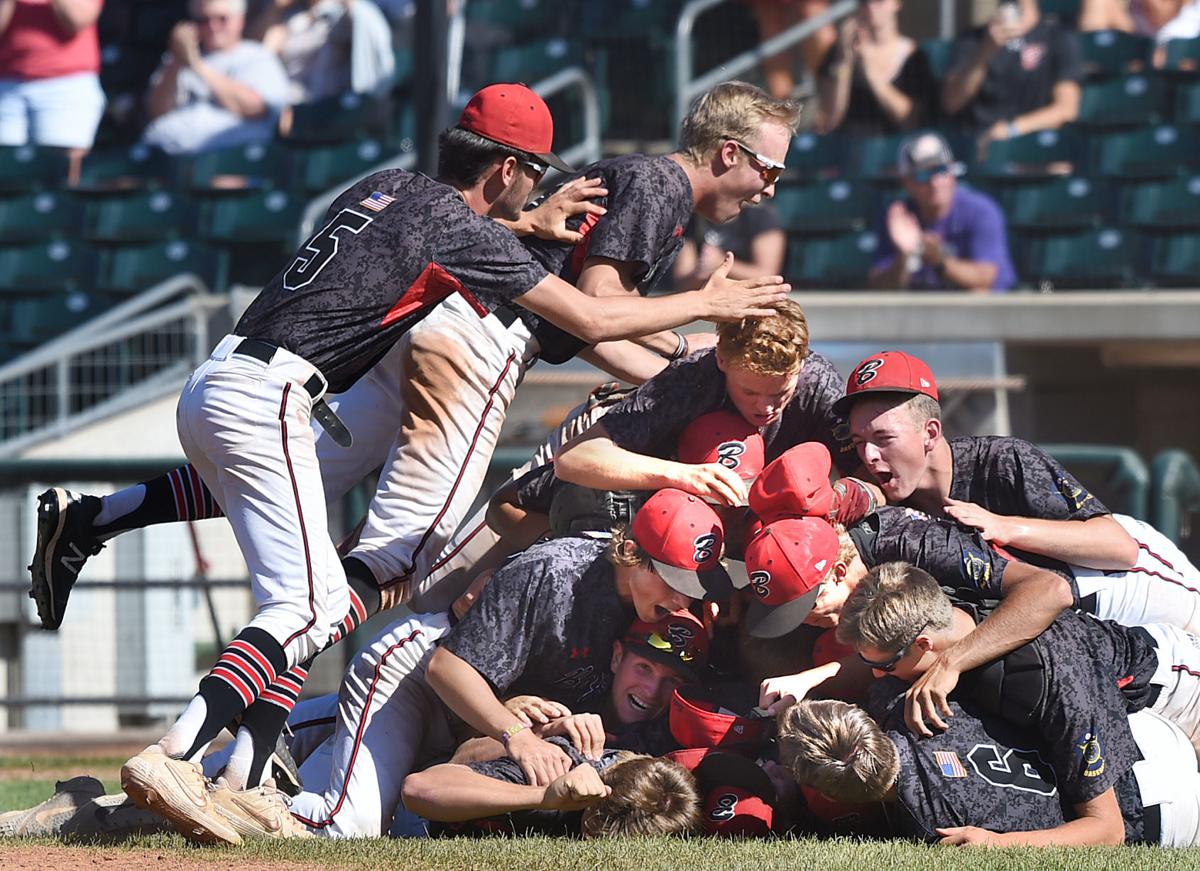 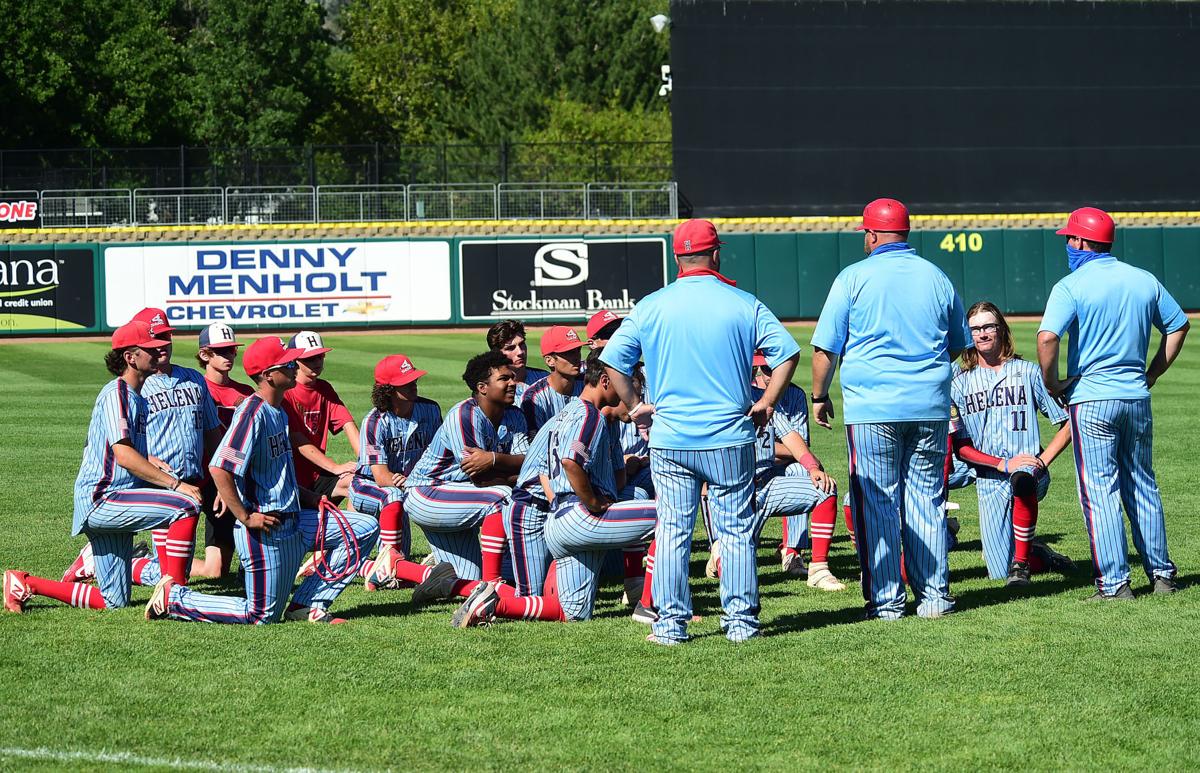 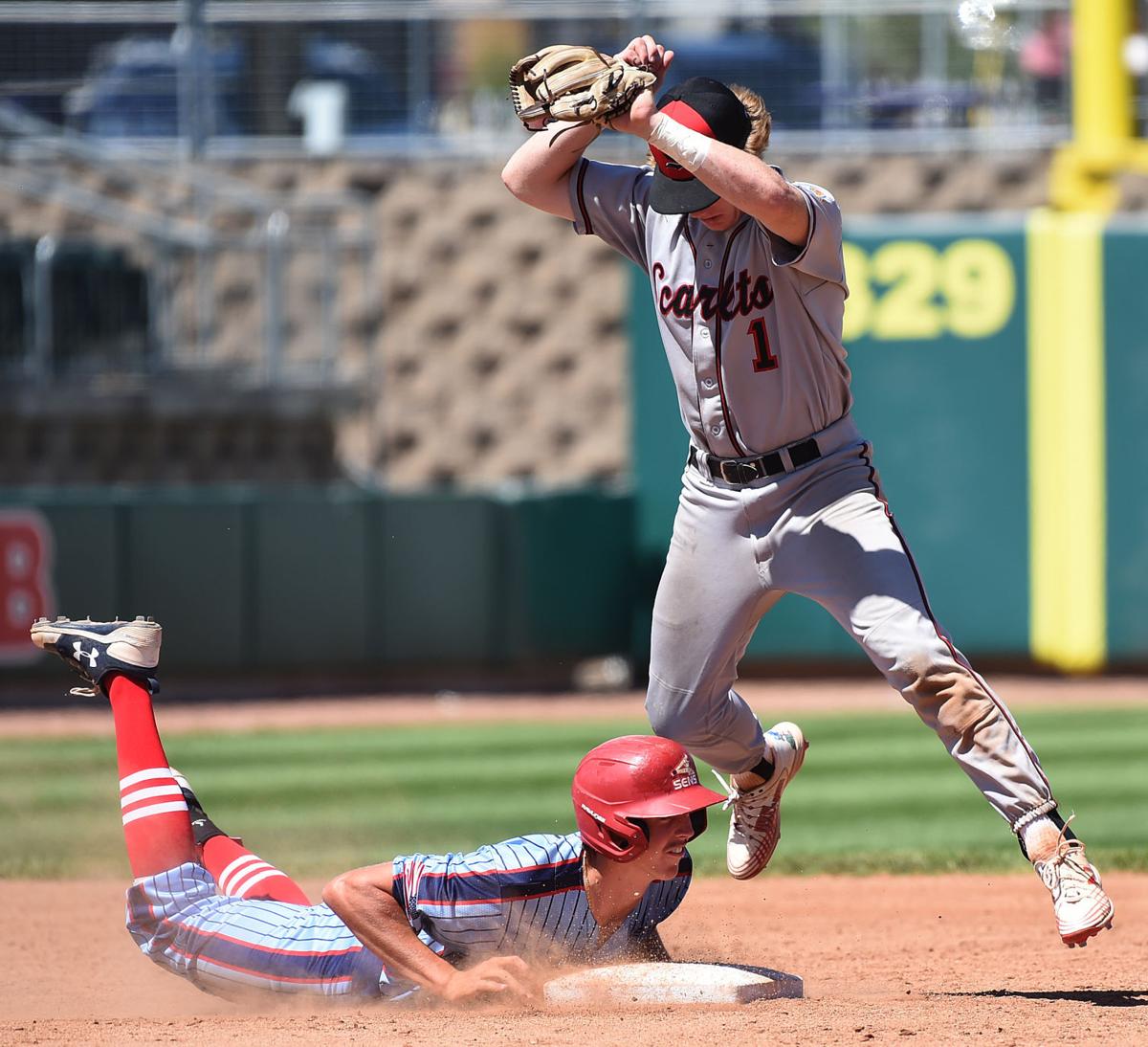 Helena's Chase Nielsen makes it back to second base under the Scarlets' Caden Dowler in a semifinal game at the American Legion baseball State AA championship tournament at Dehler Park on Sunday.

BILLINGS — For the second year in a row, the Bozeman Bucks celebrated a State AA American Legion baseball championship with a dogpile in the Dehler Park infield.

Bozeman starting pitcher Hunter Williams pitched the complete seven innings and threw 99 pitches. He allowed two hits, struck out eight and walked two. It was the second straight year Williams went the distance in the championship game at the home of the Billings Mustangs and Billings American Legion baseball.

“It’s definitely one of my favorite fields to play on,” said Williams of Dehler. “It’s an honor. I love it.”

Bucks catcher Alton Gyselman was named the tournament MVP and said winning the award “felt amazing.” Gyselman was especially proud to be part of a Bucks team that repeated.

“It is a great feeling. I can’t believe we got to do it again,” he said in between pictures as the Bucks celebrated on the infield. “People tell me this is a once in a lifetime experience, but I am happy to do it twice.”

Williams said he was confident of the Bucks’ defense. Bozeman committed two errors, but one was by the right fielder when a ball was hit high into the air on a sunny day and it bounced off the fielder’s glove.

“Just keep a clear head and believe everyone behind you is doing the same thing,” said Williams of the key to pitching a shutout in the championship game.

The Bucks finish the year 48-13. Their only loss during the tourney was 5-3 to the Billings Scarlets on Saturday night. The victory by the Scarlets meant there was three teams with one loss entering Sunday. By virtue of the Bucks’ 8-6 win over Helena in the undefeated semifinal, Bozeman advanced to the championship game.

In the first game of the day on Sunday, Helena held off a Scarlets' rally and won 5-3 to advance to the championship showdown. The Scarlets finished third at the tourney after entering as the No. 4 seed.

Bozeman coach Garrett Schultz was proud of his team’s performance over the course of the tournament. The Bucks were 3-1 in Billings after receiving a first-round bye as there were seven teams in the tourney. The Canadian teams did not participate in this year’s season due to the United States-Canadian border being closed to nonessential travel.

“It feels great,” Schultz said of the title. “It’s not an easy tournament to win at all. There were a lot of great teams, especially Helena and the Scarlets played well.”

The Bucks scored five runs in the first inning and it turns out that’s all they would need. Bozeman leadoff batter Kelher Murfitt reached base on catcher’s interference and Sage McMinn was hit by a pitch. Both would eventually score.

Helena committed two errors in the frame to allow runners on base, and one of those who reached, Ben Hubley, would also score. Logan Pailthorpe, the tourney batting champion with a .556 average, drove in two runs with a single in the frame. Preston Fliehman also had a run-scoring single.

“We didn’t have the greatest first inning. Those are plays we make 99% of the time,” said Helena coach Jon Burnett.

Cy Miller, who combined with Tyler Tenney in a 6-0 no-hitter victory over No. 7 Great Falls in the Senators’ first game of the tourney, pitched the complete six innings. He allowed three hits and struck out four, while walking four.

“Cy Miller’s effort was awesome today,” Burnett said. “I wouldn’t have any other guy on the mound for us in that spot.”

“Bozeman is a good solid team,” he said. I’d like to have another crack at them, but that’s how it went. They played well today. Tip your cap to them.”

Hunter Lindgren pitched 5.2 innings, and gave up five hits and zero runs, as the Senators advanced to the title game with a win over the Scarlets.

“It was another great outing from Lindgren on short rest,” Burnett said. “He pitched game 2 for us and bounced back and had a gutsy performance.”

The Scarlets trailed 5-0 entering the seventh, but never gave up and scored three times in the top of the final inning.

Billings’ Nate Dewar, who also doubled in the first inning, hit a two-run triple in the seventh and Johnny Day drove in a run on a sacrifice fly that brought in a sliding Dewar. Caden Dowler and Jace Buchanan started the frame with a single and walk, respectively.

The Scarlets, who went 2-2 at the tourney including the win over the Bucks Saturday, finish the year 22-25.

“I’m proud of these guys. They fought hard and gave everything they had,” said Billings coach Adam Hust. “Being here on the last day was our goal.”

Hust was especially proud of his team competing until the final out.

“They didn’t give up,” he said. “Everything you do in life, you don’t give up and work hard.”

BASEPATHS: When the year began, it was questionable whether the Montana teams would be able to complete a season due to the ongoing coronavirus pandemic. When addressing the crowd during the award ceremony at the end of the tournament, American Legion Department of Montana commander Jeff Nelson said, “Six departments in the whole United States continued baseball and we were one of them and that is how we feel about baseball in Montana.” … The tourney was originally to be played in Helena, but on Aug. 1, it was learned Billings would be hosting the event as officials in Lewis and Clark County did not give approval to the tournament because of concerns over the virus. Schultz said BALB did a outstanding job hosting the tourney. “Credit Billings for putting this on. It was awesome they stepped up and ran an awesome tournament. Give them credit.”

Helena's Chase Nielsen makes it back to second base under the Scarlets' Caden Dowler in a semifinal game at the American Legion baseball State AA championship tournament at Dehler Park on Sunday.