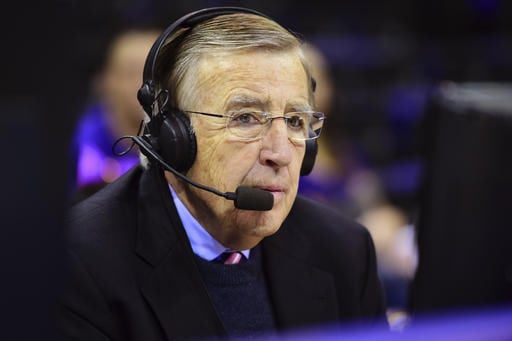 Brent Musburger, shown here calling a 2016 college basketball game for ESPN, developed his love of sports on the ballfields of Billings. 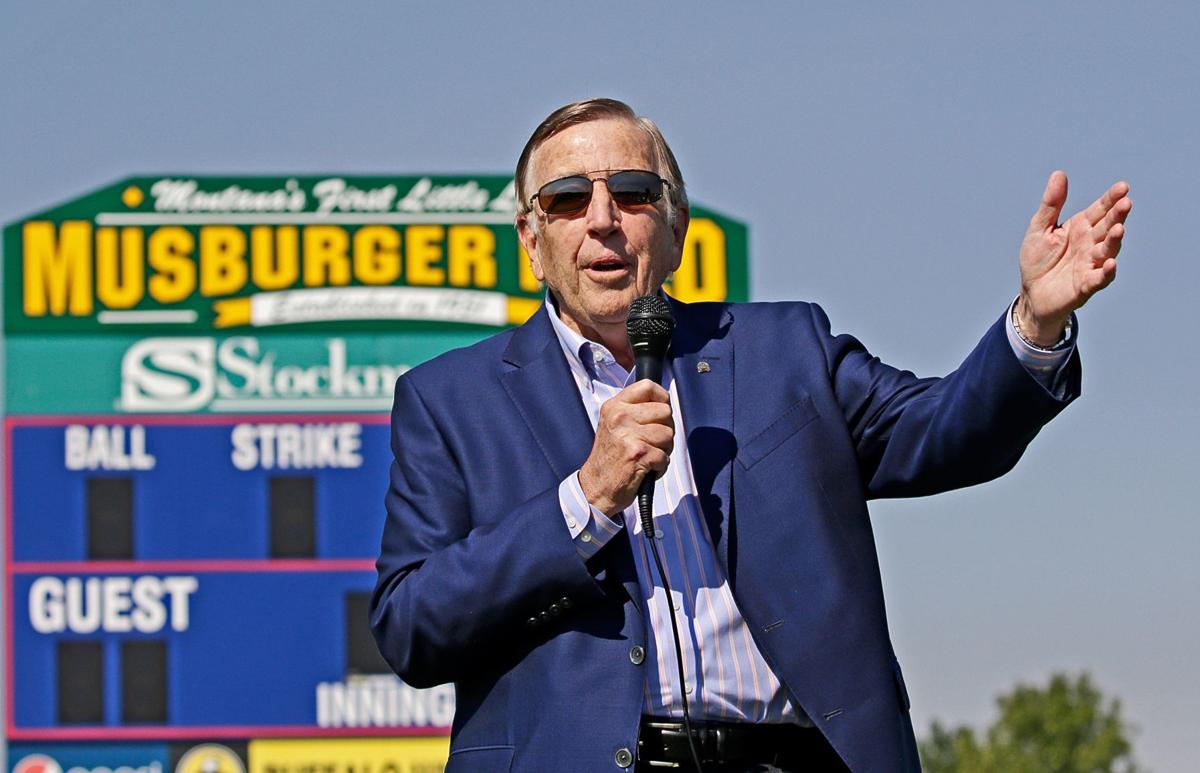 Though born in Portland, Ore., sportscaster Brent Musburger was raised in Billings. Musburger is one of nine people who will be inducted into The Montana Football Hall of Fame on March 28 in Billings.

Editor's note: The Montana Football Hall of Fame will induct nine members on March 28 in Billings. The Hall is sharing its profiles of each member with 406mtsports.com.

BOZEMAN — His authentic and distinctive style has made him one of the most accomplished and distinguished voices in sports broadcasting history.

For nearly 50 years, Brent Musburger has covered championship events in nearly every major sport, including the Super Bowl, the World Series, the NBA Finals, the Final Four, The World Cup, the Indianapolis 500, the Masters, the US Open Tennis Championships, and the Little League World Series, and he has done it across multiple media platforms for CBS, ABC, ESPN, CBS Radio Network and ESPN Radio.

Revered as “one of the best story-tellers to ever grace the sports booth,” Musburger has delivered many of the most iconic and memorable moments in sports to our living rooms. His down-home style made him relatable and endearing to his audience, much like an “old friend”.

His style and love of sports can be traced back to his childhood in Billings.

Born on May 26, 1939 in Portland, Oregon, Musburger moved in 1940 with his parents, Cec and Beryl, to Billings, where Cec opened a store called Appliance Mart. Cec became involved in the sports community as a baseball umpire and founded the Billings Little League Baseball Program in 1952.

Brent and younger brother Todd played in those early teams, as did Dave McNally, who became a four-time 20-game winner and won two World Series rings with the Baltimore Orioles.

Musburger, who often sold programs and popcorn at Billings Mustangs games, shared his father’s passion for the game.

“I grew up reading The Billings Gazette every day, trying to outrace my father, Cec, to the sports page so that I could study those box scores,” Musburger recalled in 2011, “and I guess, from reading that, that’s when I decided I wanted to become a sportswriter.”

Musburger attended elementary school in Billings before getting into enough mischief that his parents sent him to the Shattuck Military Academy in Faribault, Minnesota. After graduating in 1957, he attended Northwestern  for one year before dropping out after being suspended for owning and operating a car without a license.

Musburger was set to return home before his father suggested he attend umpiring school in Daytona Beach, Florida. Upon graduating, he spent that following summer in the minor leagues calling balls and strikes in the Class D Midwest League.

Musburger eventually returned to Northwestern for two more years. He then became a sports editor in DeKalb, Illinois.

"I had promised I would come back and finish school," he recalled years later, "but I never made it.”

In 1962, Musburger joined the now-defunct Chicago American newspaper as a sports reporter. Within a year, he was covering the Chicago White Sox and Chicago Bears.

“I didn’t tell anyone, but I had seen only one pro (football) game in my life,” he said. “I was lucky, though. The Bears won the championship that year and I became a good reporter.”

The American promoted Musburger to sports columnist in 1967 and in October 1968 he wrote a controversial column condemning American sprinters Tommie Smith and John Carlos for their Black Power salute on the medal stand at the Mexico City Olympics. Musburger defended his views, saying, “I object to using the Olympic awards stand to make a political statement.”

Shortly after, Chicago’s CBS radio outlet, WBBM, offered Musburger a sports director position that nearly doubled his salary. Although he saw himself as sportswriter for the long haul, Musburger had his family to think about and the money was too good to pass up.

When he told the sports editor of his plans, the editor retorted, “Oh, you’re crazy, nobody gives away a newspaper column. Musburger admitted later he was hoping for a $10,000 raise, and if he had received it he would have stayed.

While on an assignment covering Super Bowl III for WBBM, Musburger found himself with other reporters sitting poolside with Joe Namath at the Galt Ocean Mile Hotel in Fort Lauderdale, Florida. Walter Iooss Jr. captured a moment that was featured in Sports Illustrated, and has since become one of the most iconic images in sports history.

The previous night, Namath guaranteed his New York Jets would beat the highly favored Baltimore Colts in response to a heckler at the Miami Touchdown Club.

“The one thing I remember about that night is that it was more matter of fact than braggadocio,” Musburger said years later. “It didn’t send shock waves to where I ran to a telephone and said, ‘Put me on the air!’ It wasn’t like that. It was just matter of fact.”

Musburger watched a game that shook the football world from the photo ramp alongside Howard Cosell.

In 1973, Musburger was sports anchor for WBBM-TV and began hosting a weekly series called CBS Spectacular, as well as calling NFL games. Then he shared courtside with Oscar Robinson calling NBA games in 1975.

In the fall of 1975, CBS debuted its revamped and innovative pregame program, The NFL Today, which featured Musburger as host, former NFL player Irv Cross as an analyst and former Miss America Phyllis George as co-host and interviewer. Sports bookie Jimmy Snyder, nicknamed "The Greek," joined the program in 1976.

For 30 minutes, the live studio program was infused with personality, interviews, style and appeal that went beyond highlights and X’s and O’s, and became a must-watch TV program on Sundays.

Musburger became a household name as the unflappable maestro “parceling out airtime…handing off now to the Greek, now to Phyllis, and now to the ever-smiling Irv Cross.” Sprinkled in between, he made cuts to various stadiums, introducing the satellite feed with "You are looking live," which became his signature catch-phrase.

Musburger hosted the highly popular program for 15 years, becoming the network’s lead play-by-play man bringing timeless calls to our living rooms, such as Game 5 of the NBA Finals in 1976, when the Boston Celtics defeated the Phoenix Suns 128-126 in three overtimes, in what many regard as the greatest game ever played.

Then there was Doug Flutie’s famous “Hail Mary” touchdown pass in 1984 that propelled Boston College to a 47-45 victory over Miami. In 1985, he called Villanova’s stunning 66-64 upset win over Georgetown to capture the NCAA men’s basketball championship.

He is credited as the first broadcaster to apply the term 'March Madness' to the tournament.

“The first time I heard the term, it was applied to the state high school basketball championship in Champaign,” Musburger told the town's paper, the Times Union. “I took it to CBS (in 1982). I was the host when CBS first got the NCAAs and I used it on our pre-game show.”

After his dismissal under new management at CBS Sports in 1990, Musburger landed with ABC. When ABC Sports merged with ESPN in 2006, the association doubled his venues, further bolstering his legacy. He covered events as diverse as Major League Baseball, the NBA, golf tournaments, the Indianapolis 500, Little League World Series, soccer games, the Tour de France, and even some NFL (including hosting halftime duties for Monday Night Football).

Although Musburger retired from ESPN in January 2017, by no means did it mean the end to his career at age 77. He moved to Las Vegas to join his family and launch VSIN (Vegas Stats & Information Network), a streaming network dedicated to sports gambling news, analysis and data. Musburger began and continued to host a daily afternoon show, My Guys in the Desert, on Sirius XM Radio.

Musburger returned to the broadcast booth in the fall of 2018 as the Oakland Raiders' full-time radio play-by-play announcer and will enter his third-year next fall.

“When I stepped away from ESPN, I fully expected to be done with play-by-play,” Musburger, now 80, said in a recent New York Post article. “First, I talked to my wife, Arlene. We’d been married 57 years and it was the first time I had seven straight days with her. She said, ‘Brent, you love the action. Go do it.’”

Musburger's career has been and continues to be recognized and honored.

In November 2016, Musburger was presented with the Vin Scully Lifetime Achievement Award in Sportscasting, presented by Fordham University’s WFUV radio station in honor for the legendary Dodgers broadcaster, a Fordham graduate.

The following year he received the Lifetime Achievement Award for Sports at the annual Sports Emmys in New York presented by the National Academy of Television Arts and Sciences (NATAS).

“Brent is a legend,” says Stephanie Druly, SVP, event and studio production, ESPN. “He is one of the best play-by-play announcers ever.”

The induction banquet will be held at 6 p.m. at the Billings Hotel and Convention Center

Brent Musburger, shown here calling a 2016 college basketball game for ESPN, developed his love of sports on the ballfields of Billings.

Though born in Portland, Ore., sportscaster Brent Musburger was raised in Billings. Musburger is one of nine people who will be inducted into The Montana Football Hall of Fame on March 28 in Billings.