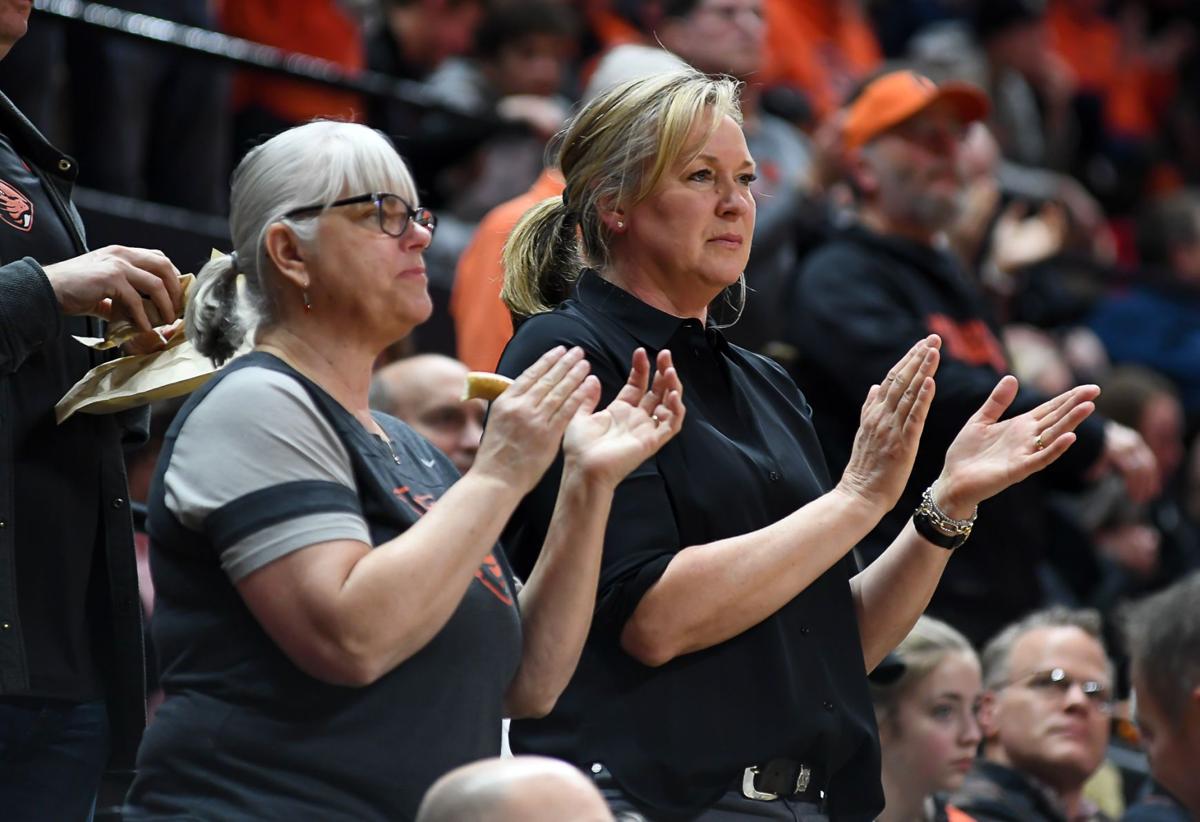 The matriarch of the Tinkle family, Lisa (McLeod) Tinkle, right, cheers for her son, Tres, and husband, Wayne, at an OSU basketball game. 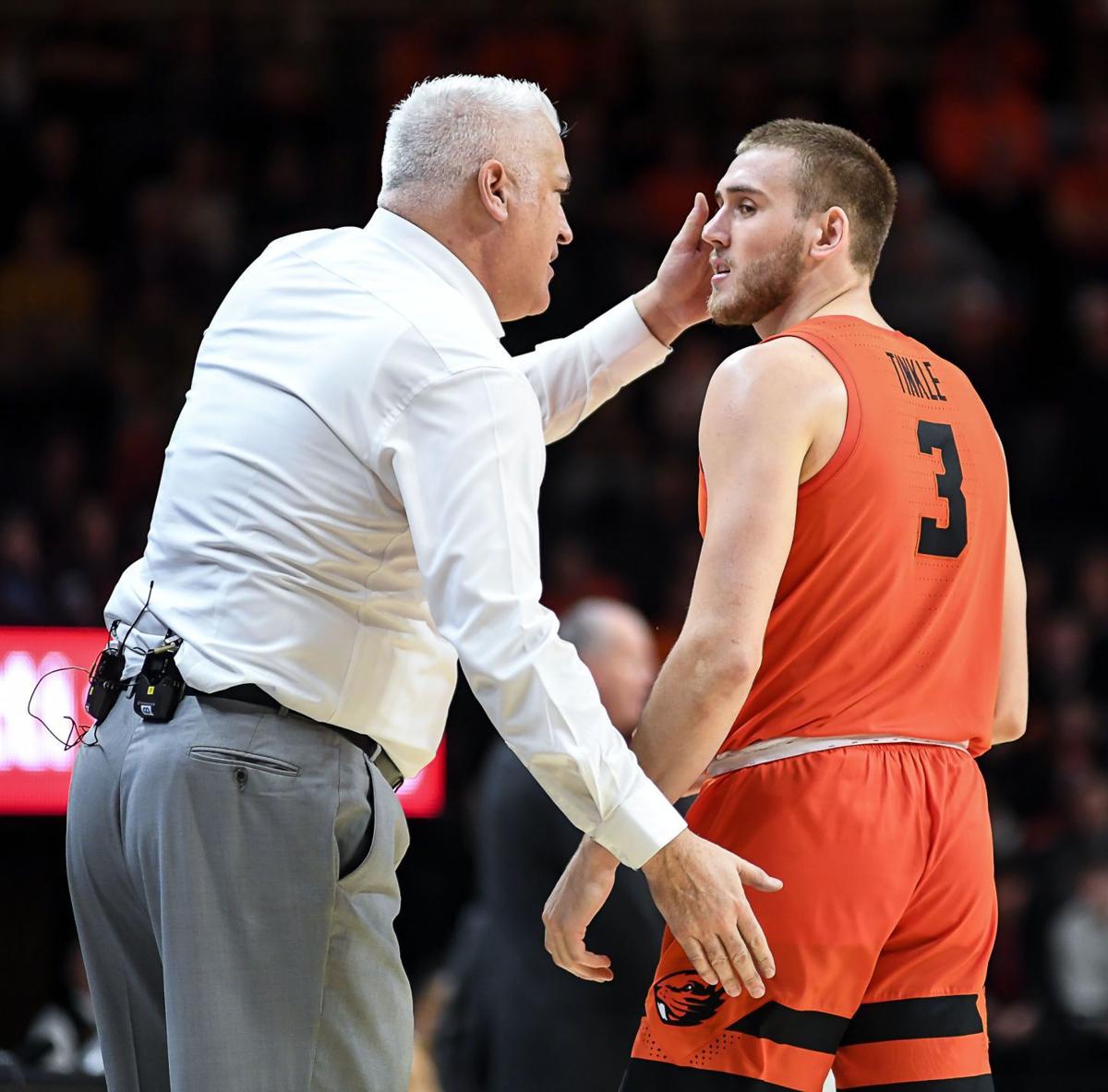 Wayne and Tres Tinkle share a moment during an OSU basketball game. 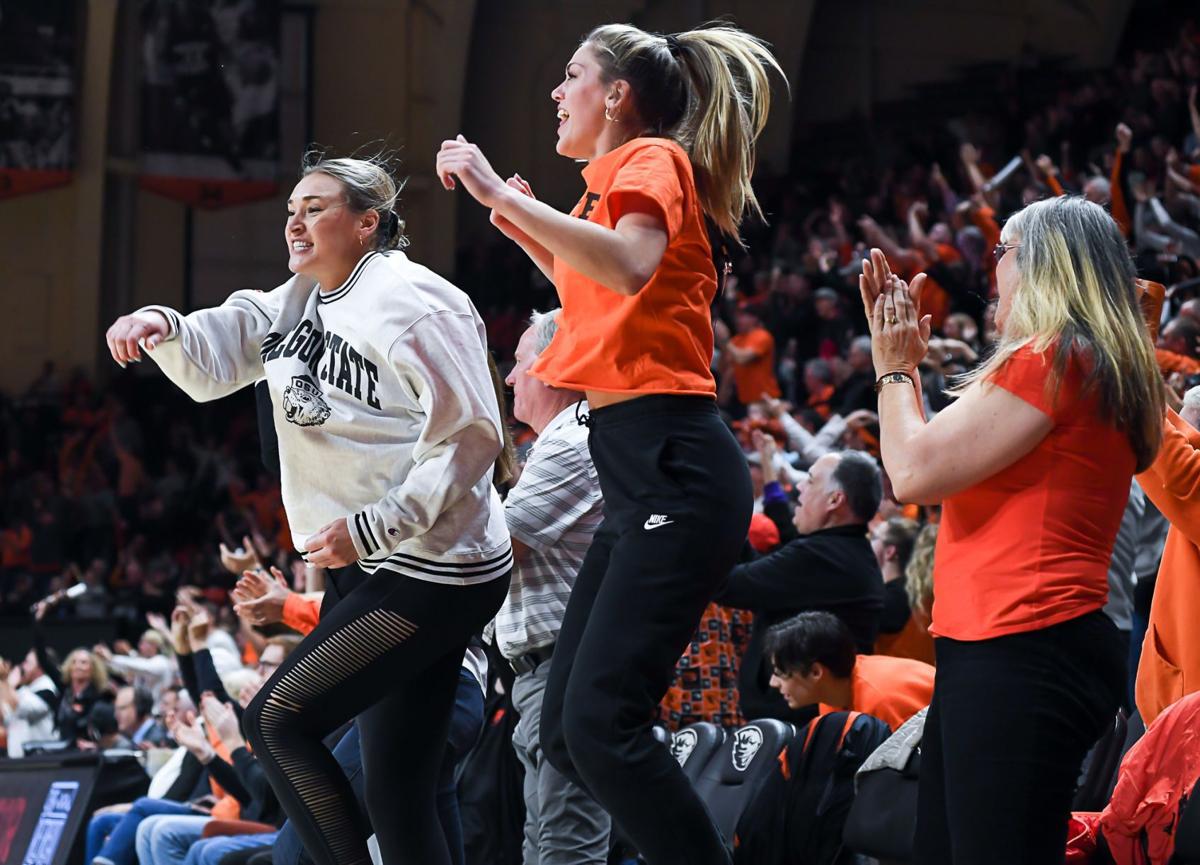 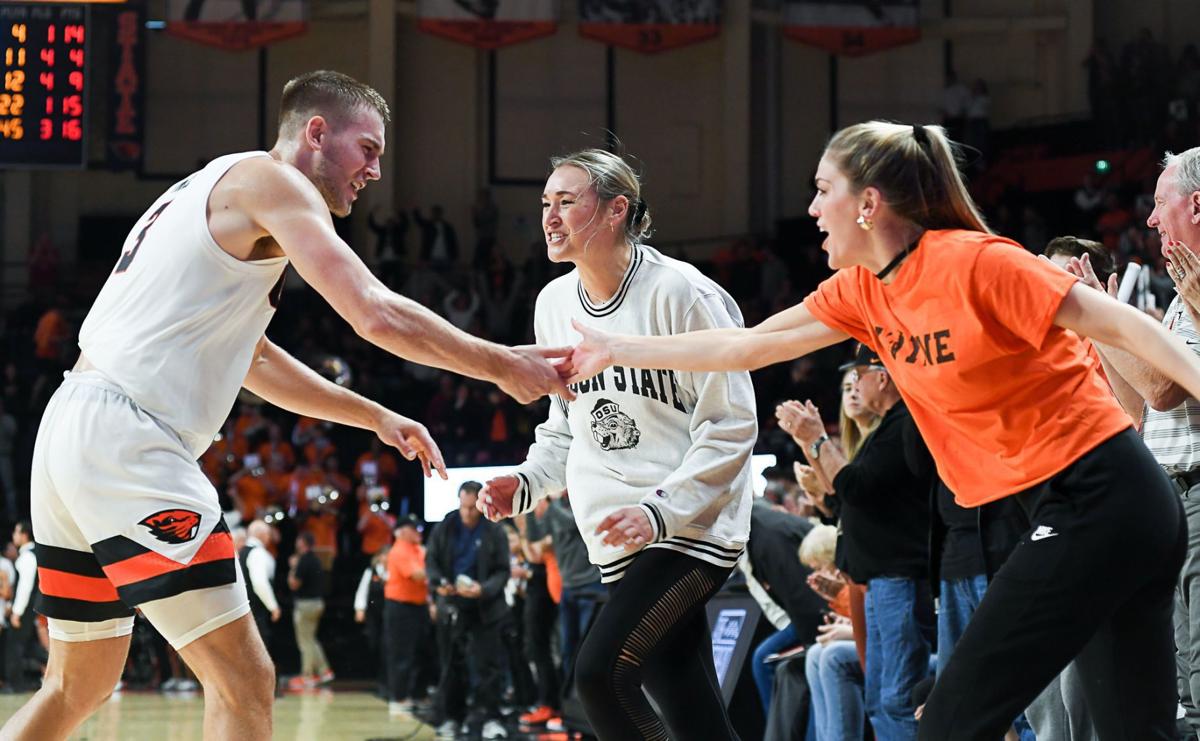 CORVALLIS, Ore. -- The roots of a basketball family grew from the days the Tinkle children would sit in car seats and watch their parents play in city league games.

Wayne and Lisa Tinkle were college basketball players at the University of Montana and extended their careers into their late 30s against different competition.

“The kids grew up thinking the basketball court was their playground,” Lisa said. “They knew the out of bounds was their play area.”

More than a decade later, circumstances changed when Joslyn, the oldest of the three children, graduated from Missoula Big Sky High School and went to Stanford to play basketball. A few years later, sister Elle would play at Gonzaga and brother Tres at Oregon State, joining Wayne as he started his second year as the Beavers’ head coach.

Three years ago, Elle wrapped up her playing days at Gonzaga about the same time Joslyn cut her career short after playing in three countries overseas. Both took jobs in Portland — Joslyn in sales and marketing for a wine and spirits company and Elle as a nurse — wanting to be closer to their parents and brother and not miss out on Tres’ time in an OSU uniform.

“I think that played a huge role in what we wanted to do,” Joslyn said. “We knew we wanted to migrate a little more toward Portland and cheer on Tres for the next few years.”

The result has been an already close family reuniting and growing that bond, once again, through basketball.

“Joslyn has gotten offered promotions or different jobs. She’s waiting until I’m done so that she can support me. It shows how much love she has for me, how much care and support,” said Tres, a senior forward who on Thursday became Oregon State’s career leading scorer.

“Elle, to see her come late to some games because she doesn’t get off work until 6 or 7, showing up in her scrubs. And then to have my mom and dad right there, it’s so special. Then to be coached by my dad, it was a lifelong dream. It’s been a fairy tale.”

Wayne was head coach at Montana, where he and Lisa attended and played basketball, for eight seasons after five as an assistant, a stretch that included six NCAA tournament appearances.

During Tres’ senior year at Hellgate in Missoula, Tres lived with his coach’s parents while Lisa racked up thousands of miles in her car doing her best to get to her son’s games as well as Elle’s in Spokane, Washington, and some of Wayne’s in Corvallis, 630 miles from Missoula.

That effort wasn’t lost on the family.

“She loves every single one of us and she didn’t want to miss any part of us growing up or special moments in our lives,” Tres said.

Lisa says she felt bad for Wayne having to go it mostly on his own his first year at Oregon State without family around. That first season was a successful one (a 17-14 record) despite the challenges involved with inheriting a senior-less program and just eight scholarship players.

She recalls watching the Beavers’ home upset of No. 7 Arizona with Tres in Missoula and “bouncing off the ceiling” in excitement. OSU would match the program’s best conference record in 25 years.

It’s been a roller coaster of an experience, from an NCAA tournament berth in 2016 to a 5-27 record the following season as a season-ending injury for Tres and other factors played a part.

But the path the last three years has been taken with the Tinkle family together for nearly every step. Lisa and the daughters have been able to attend most games home and away, further strengthening that bond.

“It’s been incredible to have that love and support, through the good and the bad,” Wayne said. “It just keeps things in perspective when at the end of the day we’re so blessed to have this opportunity. But to have our health, have our family close, the relationships we have, it means the world to us.”

At home games at Gill Coliseum, Joslyn and Elle can be found in their courtside seats, directly across Ralph Miller Court from the Beaver bench.

Both sisters have their own secret handshakes with Tres after he jogs to their location when the starting lineups are announced. After tipoff, they’re all in with energy, enthusiasm and sometimes a few words for the game officials.

“It’s certainly way more stressful being on the sideline than it ever was as a player,” Elle said. “We are dedicated and we get excited, obviously double-invested with a dad and a brother playing.”

They’ve draw lots of attention from their in-game demeanor, but they say it’s not for show. They tell each other before every game that they’re going to be calm, “then with our competitive nature and our family, we can’t help it,” Elle said.

But the opportunities to cheer on their father and brother’s team this season are shrinking, along with Tres’ time as a college athlete. The Beavers host California on Saturday, and senior day festivities are sure to be emotional for all involved. The Beavers have just one more guaranteed game after that.

Tres, a two-time Pac-12 all-conference selection, has tried to soak in his last few weeks and months at Oregon State. But the greater focus has been on trying to win games.

While in a shooting slump through a large stretch of conference play, he felt the pressure to perform as the team’s leading scorer with the Beavers struggling to find consistency. But several weeks ago, father and son made a pact to make the best of what was left of their time as coach and player.

“Wherever it takes, whatever happens, we just want to be able to know that at the end of it was sure enjoyable for all the efforts that we put into it,” Wayne said.

In a few weeks, the season and OSU’s winter term will be over. Tres, with his undergraduate degree in speech communication already in hand, will head out to pursue a professional playing career.

The daughters say they plan to stay in the area at least as long as their father is the Beavers’ coach. Joslyn is involved in coaching and training youth basketball players and Elle recently began studying to become a nurse practitioner.

For sure, family will never be far away.

“It’s just been a real dream for us to be involved with such a historic program and to have everybody so close,” Wayne said. “It’s very unique, number one. But I know it’s meant a ton for me and to Tres to have his mom, my wife, and our daughters, his sisters, here for it all. It’s really been neat.”

Congratulations to Macee Greenwood of Corvallis on earning the Missoulian's athlete of the year away for girls golf.

Congratulations to Tristan Hanson on winning the Missoulian's athlete of the year award for boys golf.

Where Are They Now: Former Montana DC Jerome Souers gets back into coaching to connect with players

Former Montana assistant football coach Jerome Souers is getting back into coaching, but not for the reasons you might think.

Congratulations to Madeline Gilder on earning the Missoulian's athlete of the year award for volleyball.

Congratulations to Hamilton's Carson Rostad on being named Missoulian athlete of the year for football.

Death, promises and Beau Braden's motivation to transfer to Montana from Washington State

“I wanted to prove to myself and to him that I can play college football, not just practice it,” said Braden, who will be a redshirt sophomore this fall at Montana after transferring from Washington State.

It was more than appropriate Missoula Mavericks third baseman Dane Fraser was credited with the final out of a 10-6 home win over the Bitterroot Red Sox Wednesday.

Almost six months to the day after her dad committed suicide, Montana Grizzly golfer Teigan Avery had a big reason to smile. Proof positive of the healing power of sports.

Montana softball outfielder Kylie Hayton made the hard decision to forego an extra year of eligibility after having her senior season cut short, choosing to focus on her next chapter: becoming a nurse.

The matriarch of the Tinkle family, Lisa (McLeod) Tinkle, right, cheers for her son, Tres, and husband, Wayne, at an OSU basketball game.

Wayne and Tres Tinkle share a moment during an OSU basketball game.