While lawyers fight over a federal judge’s order to temporarily shut down the Dakota Access Pipeline, the oil industry is grappling with uncertainty as it ponders how to keep shipping Bakken crude to market.

The questions on everyone’s mind: Will the pipeline actually be forced to halt operations, and when?

“It’s a very chicken-and-egg situation,” said Elliot Apland, a managing member of MarbleRock Advisors, a firm that handles supply and logistics for the rail and energy industries. “I think a lot of people are just waiting to see what happens.”

Many observers anticipate a shutdown could result in a resurgence of trains carrying Bakken crude, a prospect that has rail safety advocates and farmers concerned.

Whether more oil trains hit the tracks depends on the outcome of the latest legal maneuvering over the pipeline. At the moment, the order to shut down the line is on an “administrative” hold as the case moves to a panel of judges on a federal appeals court.

The shutdown order came July 6 from U.S. District Judge James Boasberg, who for four years has overseen a lawsuit launched by the Standing Rock Sioux Tribe. The tribe’s reservation lies just south of the pipeline’s Missouri River crossing in North Dakota, and tribal members worry a potential oil spill could devastate their water supply. Boasberg ordered pipeline developer Energy Transfer to idle the line for the duration of a lengthy environmental review expected to last at least 13 months, and for the company to drain it of oil by Aug. 5.

In the days ahead, the appellate judges will consider arguments on whether the pipeline must halt operations while the U.S. Army Corps of Engineers and Energy Transfer appeal Boasberg’s shutdown order and his earlier ruling requiring the environmental study.

The short-term hold buys the oil industry a little more time to prepare for a potential shutdown of Dakota Access, which has been operating for three years and can transport up to 570,000 barrels per day of oil from North Dakota to Illinois. That amount equaled 40% of North Dakota’s daily oil output before the coronavirus pandemic hit, sending oil demand, prices and production plummeting.

Several experts anticipate that a shutdown of Dakota Access would eventually prompt oil companies to ship another 200,000 barrels per day of Bakken crude via rail, the equivalent of about three more oil trains leaving the region each day.

The shift would not happen overnight but likely would occur gradually over the course of the next year, assuming oil production slowly ticks back up as prices rise, North Dakota Pipeline Authority Director Justin Kringstad said.

He anticipates some of the added trains would head south toward the oil hub of Cushing, Okla., and the Gulf Coast, home to refineries and export terminals. The trains could, in a sense, follow the route of oil through Dakota Access. Some of its crude continues south through other pipelines once it arrives in Illinois.

“Once you get to the Gulf or Cushing, you’ve opened up a lot of doors as far as markets go,” Kringstad said.

Lengthy trains made up of black oil tank cars already depart North Dakota each day, primarily for the East and West coasts, although a small number travel to the Gulf. Oil train traffic has dropped considerably since its peak in 2014 -- when tank cars carried more than 800,000 barrels per day to market -- as new pipelines came online offering cheaper shipping prices. In recent months, trains hauled about 300,000 barrels per day out of North Dakota.

A handful of other pipelines also carry oil out of the region, and they have space for more crude given the recent downturn in the oil patch. They are likely to fill up first if Dakota Access shuts down, Kringstad said.

If the other pipelines become full, that could prompt companies that lease tank cars parked throughout the American West to send them toward the Bakken. They are “in storage and ready to go,” said Apland, who does not anticipate that mobilizing them would be a major constraint.

The more challenging matter is that of loading oil into the tank cars. Some terminals might need to restart or hire more workers, Apland said.

“You’re going to have to give them some sort of commitment,” he said. “They’re not going to hire people for a flash in the pan.”

Boasberg's shutdown order doesn't appear to have prompted a sense of urgency to prepare for more oil trains. Apland said he has not noticed oil companies rushing to secure train space.

“They are out there exploring their options,” he said. “They are absolutely vetting ideas. But there are not major-scale commitments being made based on the assumption that DAPL is being shut down.”

When oil train shipments soared in 2013 and 2014, they caused headaches for farmers and grain elevators seeking to ship crops via trains across the same tracks.

“We were seeing delays of as much as a month or more in receiving cars,” said Stu Letcher, executive vice president of the North Dakota Grain Dealers Association. “In a business like shipping oil or grain, when the product needs to go to market, it needs to be done timely. It can get very costly if there are delays and backlogs of cars.”

The agriculture community is worried about rail congestion again if Dakota Access shuts down, and the concern is great enough that six associations representing grain, corn and soybean growers in the Dakotas, among other groups, joined forces this past spring to file a legal brief urging Boasberg to keep the pipeline from shutting down.

A late-summer deadline for emptying Dakota Access of oil could be especially problematic for the ag community if it impacts the availability of trains to haul crops, said Letcher, whose association represents grain elevators across North Dakota and was among those who submitted the brief.

“I don’t know if the timing could be any worse,” he said. “I would expect to see some harvest activity beginning- to mid-August that would coincide right with when we have a larger volume of oil moving by rail.”

Much of the grain grown in North Dakota gets shipped by train west, through Montana to the Pacific Northwest.

Although the prospect of three more oil trains leaving the region each day might not sound like a lot, Letcher said, congestion can arise due to the length of a single train.

When two trains meet, one needs to move onto another set of tracks known as “siding” so that the other can pass. Lengthy trains might not have enough room to clear the main line, he said.

Letcher noted that BNSF Railway, which transports the bulk of Bakken crude, has made improvements to its rail lines to address congestion issues, but he still wonders if railroads would struggle to ship more oil than the current volume.

BNSF spokeswoman Courtney Wallace said the company has invested more than $1.5 billion in rail upgrades across North Dakota since 2013. That includes nearly 100 miles of an additional track from Minot through Williston into Montana. The company also has added or lengthened 11 sidings.

“The upgrades that we’ve made in North Dakota and throughout our system have provided the additional capacity to ensure we are able to alleviate any concerns around congestion issues,” Wallace said in a statement to the Tribune. “We’ve been moving all-time records of agricultural goods for the past few years, while continuing to move all of the other commodities we move across the northern tier, and we are well positioned to move all of our customers’ goods safely and efficiently.”

As Bakken rail shipments grew in the early days of the shale boom, so did public concern over the risks oil train derailments pose to communities.

The most high-profile incident occurred in Quebec in 2013 when a train carrying Bakken crude derailed, erupting in a fiery explosion that killed 47 people. Five months later, an oil train collided with a grain train near Casselton in eastern North Dakota, resulting in an explosion but no fatalities or injuries.

Washington state in 2019 went so far as to set a cap on the vapor pressure of oil unloaded at terminals in the state, effectively banning trains carrying Bakken oil. The U.S. Pipeline and Hazardous Materials Safety Administration in May overruled the law at the request of the attorneys general in North Dakota and Montana, and Washington has not appealed the decision.

Nationally, concerns about oil trains have largely fallen out of the spotlight since 2015. The Obama administration put forth a series of rules aimed at improving oil train safety that year, around the time when crude-by-rail shipments started dropping.

If communities throughout the United States start seeing more oil trains again, there could be more of an outcry, said Fred Millar, an Arlington, Va.-based independent rail safety consultant.

“I think it could change in part because the trains are, besides being real dangerous, they are also obnoxious,” he said. “If they have any kind of reason to stop, they block all kinds of crossings through your cities.”

Among the requirements imposed in 2015 was a rule that tank cars meet new design and performance standards, including a thicker shell. That made them “marginally safer,” Millar said, adding that the bulk of the tank cars on the tracks today meet the standards.

The rules, however, did not impress him. He said they ought to have gone further to address issues such as routing to avoid high-population areas.

Wallace said BNSF has an “unrelenting commitment to safety” and that it invests billions of dollars each year to improve its operations and safety efforts.

She said the company has a “very robust” track inspection program, as well as technology to detect potential problems along key routes. For example, BNSF is using artificial intelligence to monitor millions of readings each day from sensors along routes.

“We use this data to determine the urgency of equipment repairs and to spot trends that indicate when maintenance should happen,” she said.

Now, at a time when more oil train shipments could arise, Millar is worried about efforts by the Trump administration to roll back various rail safety rules, including a 2015 requirement that oil tank cars use a new braking system.

He said first responders in communities with oil train traffic are ill-equipped to put out fires that can result from derailments.

“The risks are the same as they always were,” he said.

The Billings Gazette and other Lee Enterprises newspapers in Montana and North Dakota teamed up to examine the implications of recent court rulings on major oil pipelines. This is the second in a three-part series.

The flow of Bakken barrels

A warning placard on a tank car carrying crude oil near a loading terminal is shown in Trenton on Nov. 6, 2013. 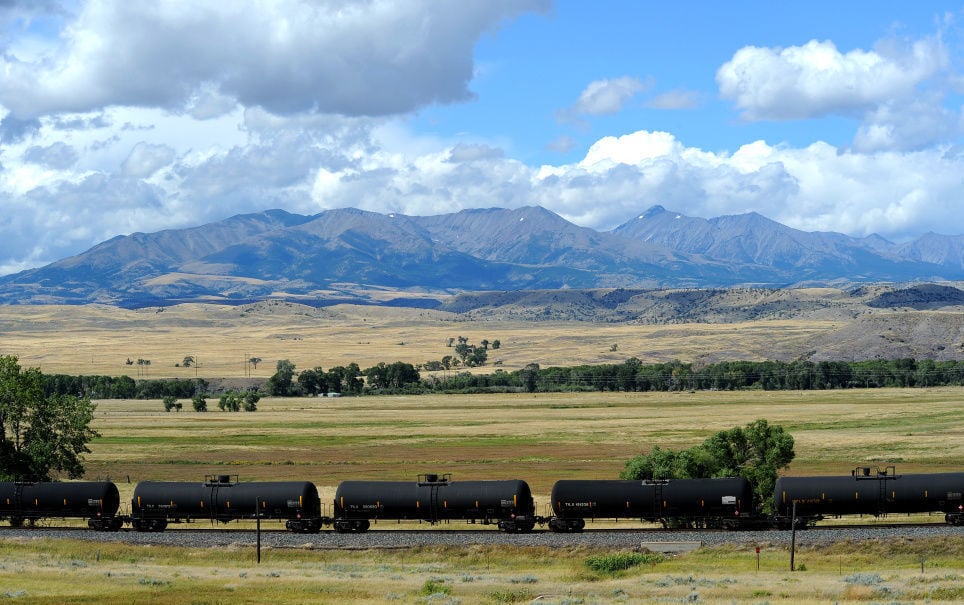 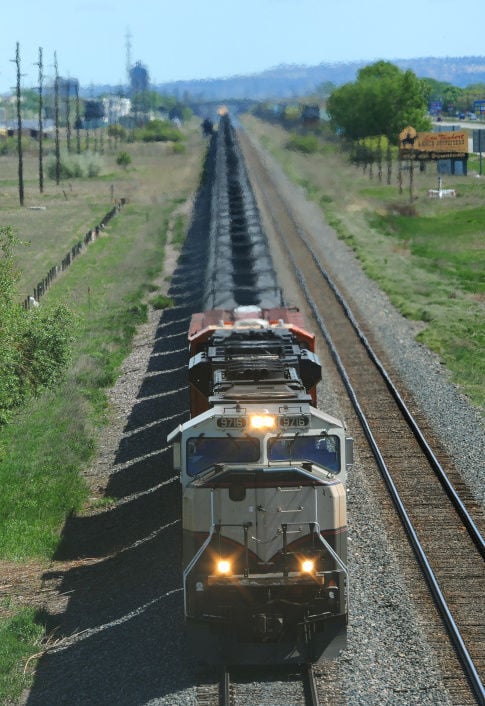 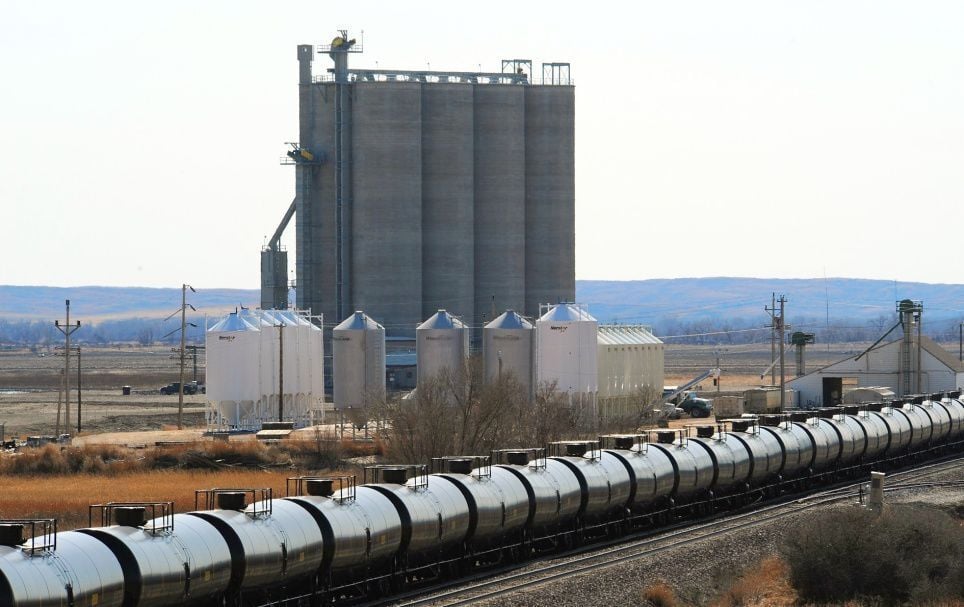 An oil train passes United Grain and Santrol's facilities in Culbertson in 2014.