Cabins don’t get much more exclusive than this one.

The 1930s-era cabin — which has since been updated — was built on the East Boulder Plateau, about a half-mile from the Absaroka-Beartooth Wilderness, in between the Boulder and West Stillwater river drainages.

As cool as the cabin is, Forest Service officials said it may be illegally occupying forest land, benefiting a select few who have a key to the locked front door. Yet until an investigation is launched, they can't say for sure.

"Until all of the legal research kicks in, we don't know that," said Marna Daley, Custer Gallatin National Forest public affairs officer. "The bottom line is ... we would have to do our due diligence."

Big Timber-area resident Dennis Holman is the alleged owner of the cabin, but did not return phone messages left by the Billings Gazette. According to sources the cabin is also used by the local snowmobile club as a warming hut in the winter. The club officer did not return a call seeking confirmation.

No district ranger has ever taken on the work of formally removing the Whittaker cabin. That may be because, as MaryBeth Marks, minerals program manager for the Custer Gallatin National Forest said, it is a law enforcement process that takes a significant amount of agency effort, money and time. As the Forest Service's budget and staff have been steadily reduced, and workers routinely reassigned, the Whittaker cabin has never risen to priority status.

The situation raises a question of fairness. On the nearby Boulder River cabin owners are paying thousands of dollars to the Forest Service for similar-aged structures on federal lands. In nearby Lower Deer Creek, a similar structure built by a Big Timber family on forest land was turned into a recreation cabin open to the public in the 1990s. Historic cabins built on forest lands in the Stillwater River drainage were eventually burned decades after the Absaroka-Beartooth Wilderness was formed and the structures became illegal.

Such trespass isn’t unusual on the forest, Marks and Daley said. Ideally, similar violations are caught and dealt with quickly. The Whittaker cabin, however, has managed to avoid being challenged for decades, possibly because it’s so remote.

“It really is a workload management issue whether to take it on as a project to expend money on,” Marks said.

The Custer Gallatin National Forest is also already occupied with access disputes regarding the Crazy Mountains. However, in that case it's the public asserting a right to old trails across private lands, whereas the Whittaker cabin is a private individual asserting exclusive rights to public land.

The mining history of the area adds a different twist to the situation. Decades ago, cabins were often built on such remote claims.

The website goes on to note, “You may not construct, place, or maintain any kind of building or other structure, road, trail, fence or enclosure, and place or store equipment without the prior approval of a plan of operation from the Forest Service.”

The Forest Service map for the East Boulder Plateau does not show the land as part of a patented claim, which are white patches within green forest lands.

The Bureau of Land Management oversees all mineral rights in the United States, even on Forest Service property. According to the BLM website, “A patented mining claim is one for which the Federal Government has passed its title to the claimant, giving him or her exclusive title to the locatable minerals and, in most cases, the surface and all resources.”

Since 1994, however, the agency hasn’t accepted any new patents.

According to Robert Grosvenor, a minerals administrator for the Custer Gallatin National Forest and history buff, the mining claim for where the Whittaker cabin sits was dropped in 2014.

Two weathered posts near the cabin contain pieces of tin punctured with words and letters similar to those used to mark mining claims. One was stippled on three sides with tin that read: BLAK POWDER, FOXX INC. and B.P. QUARTZ. The other post has a piece of tin punctured with the initials JC, SW., COR and 5003.

Despite its remote location, the Whittaker cabin and its environs are well known to some, mostly four-wheel drive enthusiasts who navigate the rocky route to the plateau.

“I don’t have a feel for how much use (the cabin) gets,” Grosvenor said. “I’ve never gone by and seen the door open,” but he does know that ATVers regularly picnic at the cabin.

Given the extensive mining history of the area, the Whittaker cabin has “been known to the Forest Service for many years,” Marks said.

The blackening logs of the cabin were stacked on the edge of an expansive, boggy, wildflower-filled meadow at an elevation of about 9,000 feet.

The cabin is a mix of gathered bits. Tacked onto the front logs are handmade wooden and metal sled skis, grills, and two scoop shovels. Out back a fading red 1930s-era Coca-Cola cooler rests not far from an abandoned Cabinet Wesco coal-burning stove.

A graying, limbless pine tree is affixed upright to the building’s front like a flagpole. It holds a whitened bull elk skull and antlers beneath an apparent two-way radio antenna. In faded pencil on the door are the barely visible words “keep out.”

Despite the cabin’s isolated locale, it has running water delivered by a black plastic pipe snaked from a nearby stream. Large propane tanks along the back wall supply gas for a cook stove. Not far along a beaten path is an outhouse overlooking the meadow.

The cabin may have been built as early as 1939 using logs from other abandoned mining cabins in the area, Grosvenor said.

“It’s a hodge-podge of pieces,” he said.

“Other than the setting is stunning, it’s not much of a building,” Grosvenor said. “I don’t think it even has any cultural value” because it has been modified over the years.

The cabin gets its name from Dewey Whittaker, a flashy and bejeweled mining entrepreneur who staked placer and mining claims on the plateau, as well as in other areas of Montana. According to the Montana Department of Environment Quality’s Abandoned Mines website, Whittaker held claims on the East Boulder Plateau as early as 1944.

“Just because the area was so remote, a lot of people used (the cabin) to stay dry and warm,” Grosvenor said.

Other speculators were working the area at the same time, he said, staking claims to iron, then chromite, “they kept looking for something that would make them money.”

That continues to this day. The area is home to the largest known deposit of platinum group metals in the world. The Canadian firm Group Ten Metals is currently basing crews on the grounds around the Whittaker cabin as it drills to assess mineral deposits. Those claims are next door to ones already patented and being worked by Sibanye-Stillwater, a South African mining company, at its East Boulder and Stillwater underground mines.

“It’s a neat place to be accessible by a wheeled vehicle,” Grosvenor said. “We don’t have a lot of those areas that are open. That’s probably why we’re seeing so much (four-wheel drive) use up there.” 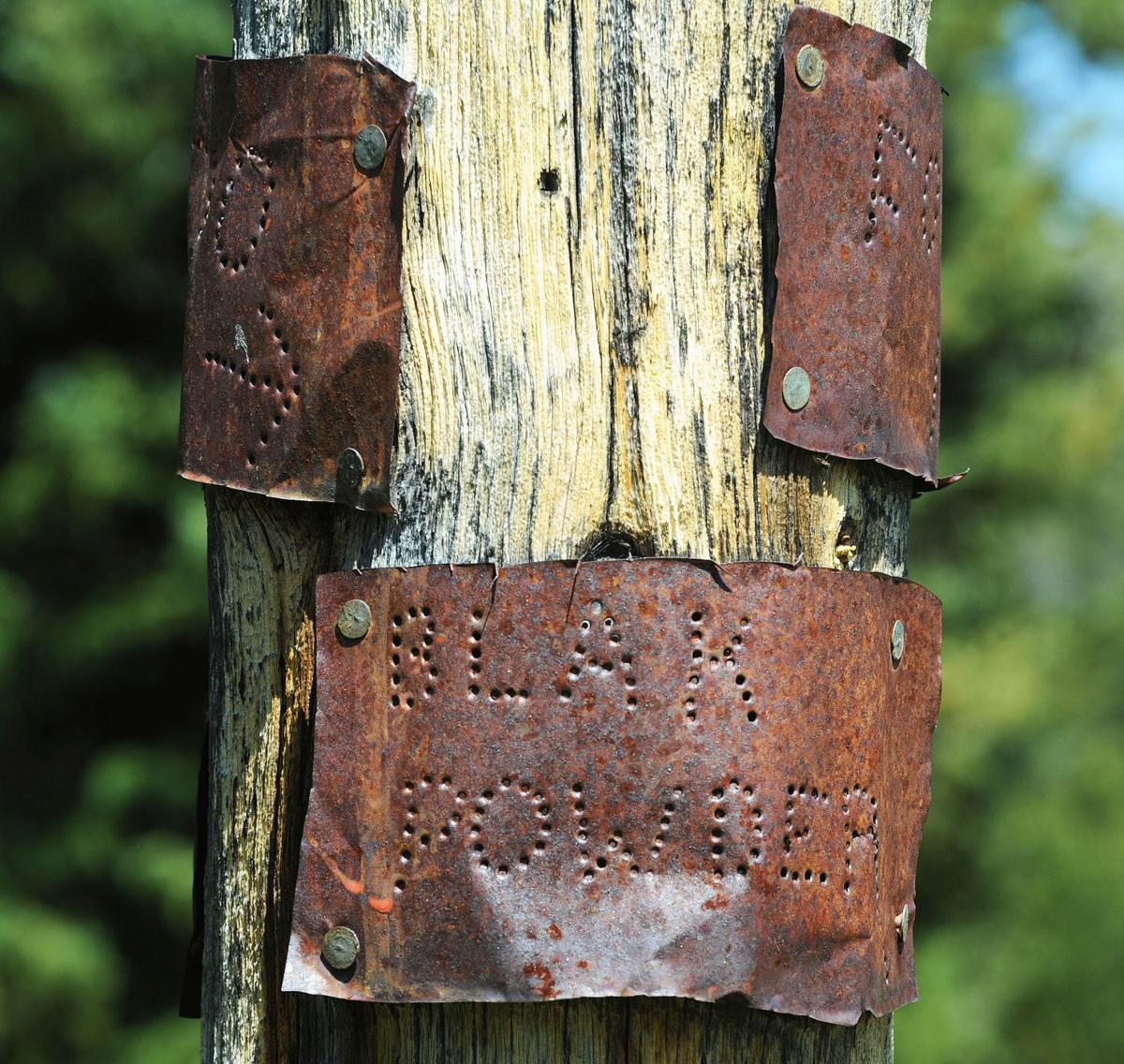 A post contains three different handmade tin signs on it next to the Whittaker cabin. 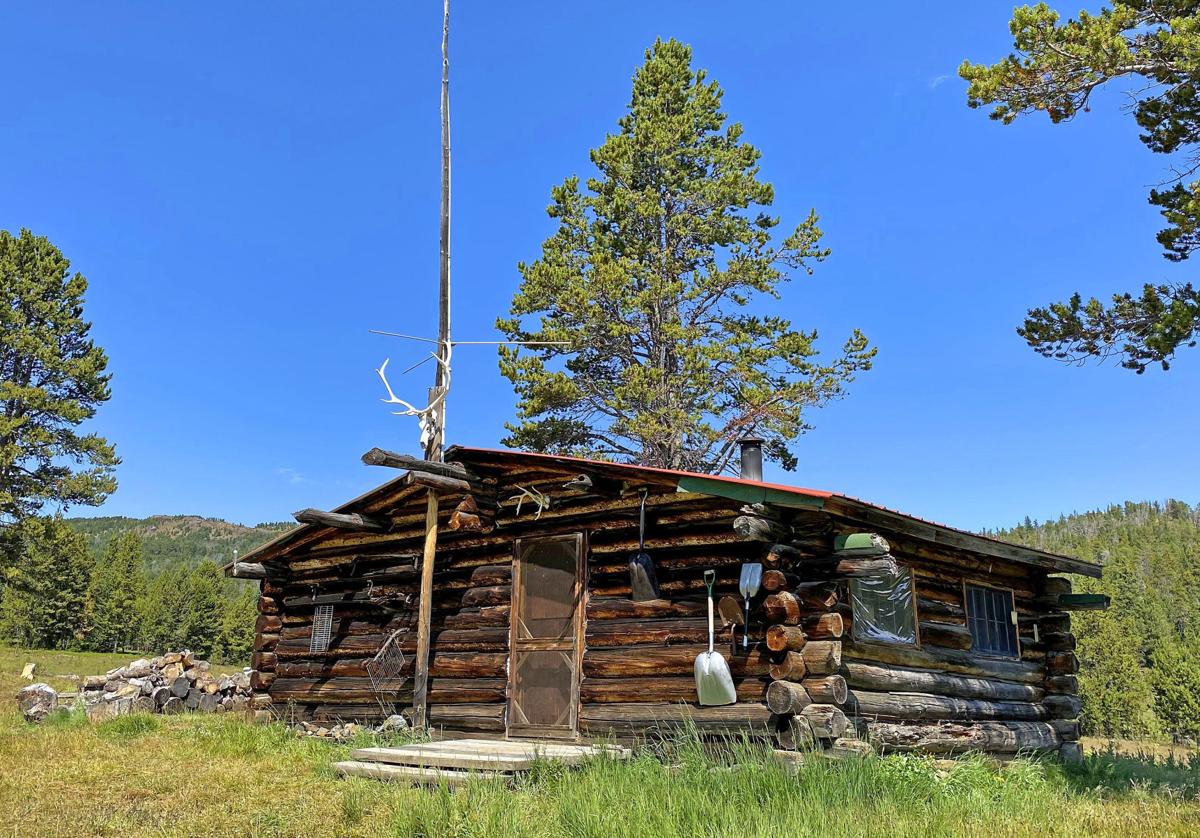 The Whittaker cabin sits on the edge of a meadow atop the East Boulder Plateau in the Custer Gallatin National Forest. Located at an elevation of about 9,000 feet, the cabin is only accessible by four-wheel drives, ATVs or snowmobiles. 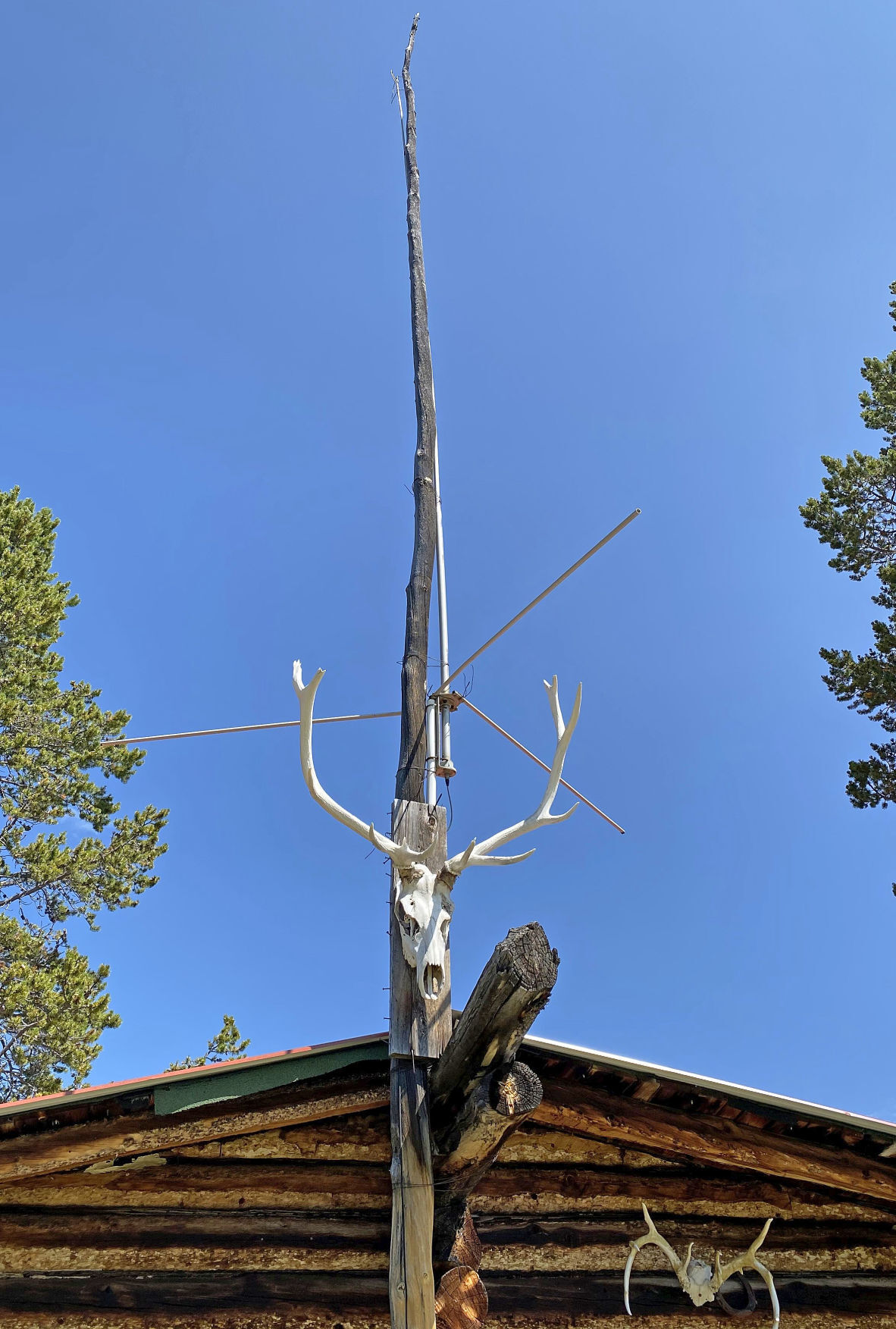 A radio antenna is tacked to an old tree that also holds a set of elk antlers and skull. 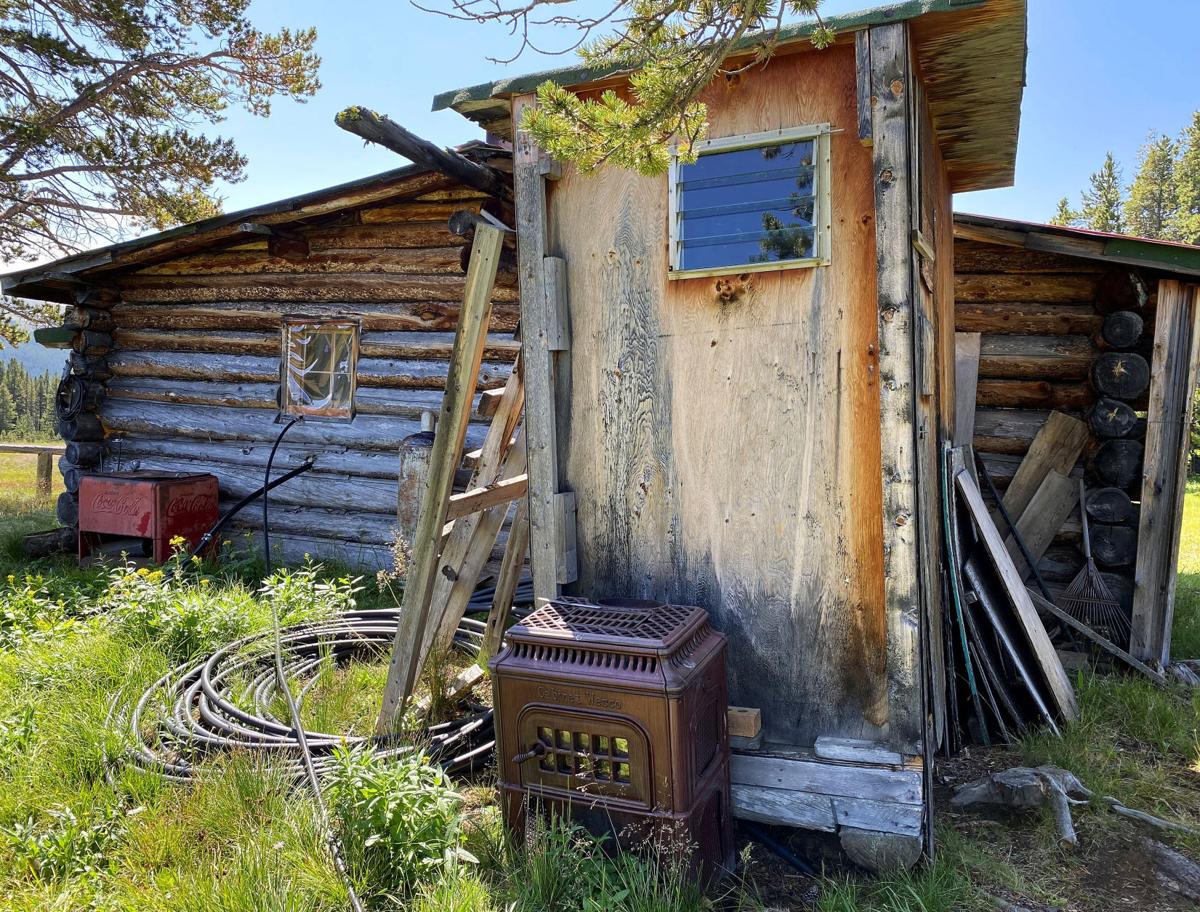 The back of the Whittaker Cabin contains a collection of old trash, including a coal burning stove and Coca-Cola cooler. 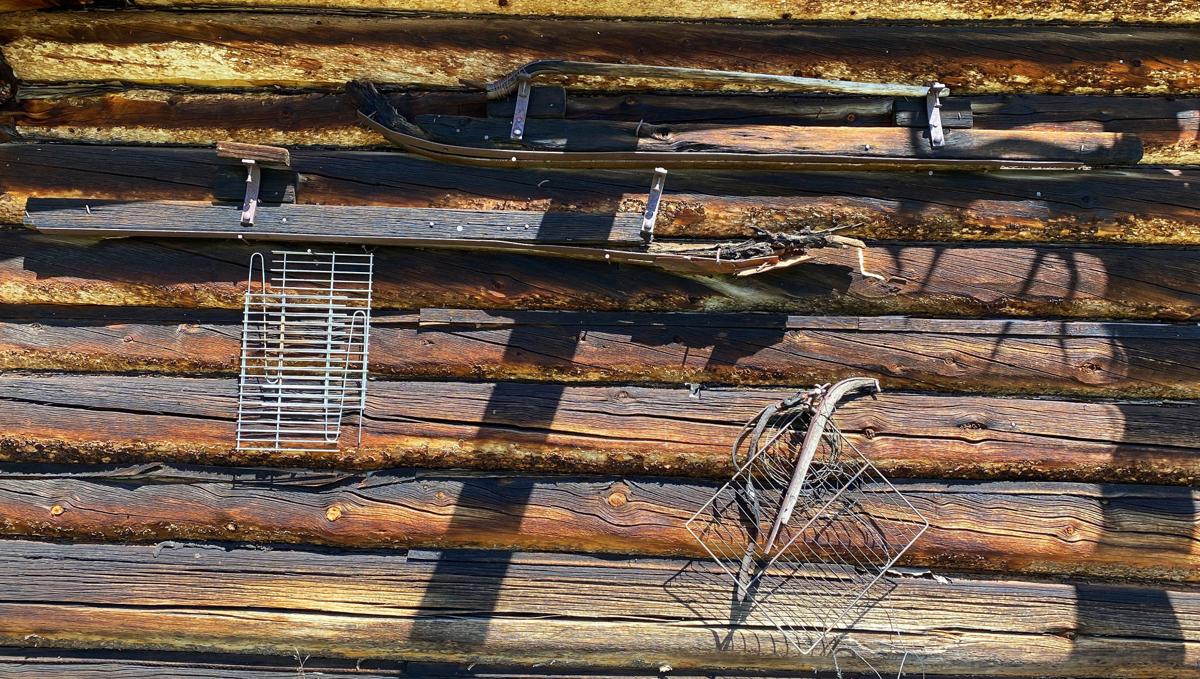 The front wall of the Whittaker cabin contains a collection of odds and ends, including a pair of old sled skis.