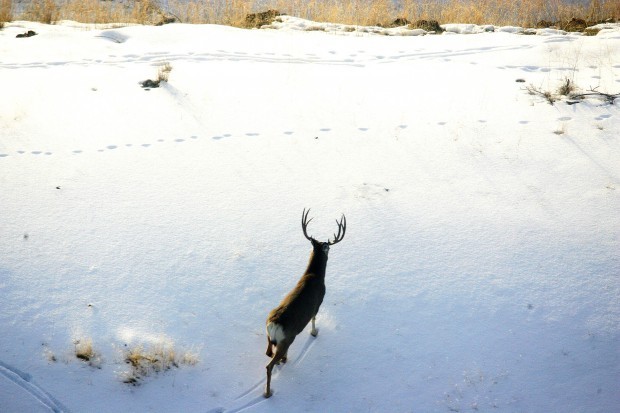 On two days this week, Montana Fish, Wildlife and Parks biologist Craig Jourdonnais (pictured above) and helicopter pilot Joe Rahn counted mule deer on the rugged east side of the Bitterroot Valley between Sula Peak and Beef Ridge. The deer population appeared to be faring quite well following the annual hunting season.

Every year thousands of hunters hope to draw a permit for a chance to hunt large mule deer bucks like this one spotted last week during the annual winter deer survey.

RYE CREEK - "Right there under that tree. There's muleys right there."

The helicopter corkscrews back hard to the right as the deer make a break for the ridgetop.

"Look at them. They are a bunch of fat butterballs."

Ace helicopter pilot Joe Rahn swoops right past the small herd as they deftly leap over clumps of sage and rabbitbrush in their dash to escape this new noisy predator.

In the time it takes to count to nine, Rahn edges the helicopter past the mule deer while Craig Jourdonnais tallies the numbers of bucks, does and fawns in the bunch.

Rahn has worked with the Montana Fish, Wildlife and Parks Bitterroot-based biologist before. He knows it can be hard to differentiate does and fawns from straight above or the rear view.

The profile is best.

"A fawn has a more rapid bounce and its mouth is shorter," Jourdonnais said. "That's hard to see looking straight down on them."

For two long days this week, the pair flew up and down ridgelines from Sula Peak to Beef Ridge along the east side of the Bitterroot Valley to see how well mule deer populations have fared in one of the most sought-after places to hunt big buck deer in Montana.

Using GPS units to guide their flight patterns, the men systematically fly over the rugged landscape counting every mule deer they see.

"Mule deer surveys are extremely difficult to do from a fixed wing aircraft," Jourdonnais said. "Deer are like popcorn. They don't line out like elk. They react erratically and just scatter."

"The only good way to do this in a mountain environment is from a helicopter," he said.

And it takes a top-notch pilot to make that safely happen.

"I've flown with a lot of different pilots and Joe Rahn is the cream of the crop," Jourdonnais said. "We're really fortunate to have him. He did a lot of flying in Alaska and was a pilot in Iraq in the Marine Corps. He brings a lot of experience."

On this flight just north of Rye Creek, there are deer everywhere.

The challenge is to count every one of them once and only once.

To make that happen, Rahn uses his helicopter like a cutting horse. Once Jourdonnais finishes his count, Rahn edges the helicopter past the deer and turns them away from the next herd just over the hill.

"We never want to spend too much time over deer," he said. "We don't want to put too much stress on them."

In this single afternoon, the two count more than 500 deer.

Jourdonnais had not yet made his final tally on the this year's winter survey by late Thursday afternoon, but the preliminary numbers look good.

The overall numbers from Sula Peak to Rye Creek pretty much matched up with last year. This year, the biologist counted 543 mule deer. Last year, the number was 540.

Buck and fawn numbers are much improved.

Last year, Jourdonnais counted 16 bucks per 100 does in the post-hunting season survey. This year the number was 28.

Changes in regulations for both the trophy mule deer hunting area, HD 270, and the adjoining hunting district may already be bearing fruit.

Two years ago, the state dropped mule deer buck permit numbers in HD 270 from 100 to 45 in response to sportsmen requests.

"We knew we were growing big bucks on private lands in the district where there was little hunting access available," Jourdonnais said. "Sportsmen told us they were willing to sacrifice permit numbers to see larger bucks on public lands. We're definitely starting to see these bigger mature bucks on public lands."

The state also required people hunting mule deer in the adjacent hunting district to get a permit that only allowed them to harvest deer in that single district.

In the past, somewhere between 500 and 900 hunters picked up permits in HD 250 when the regulations didn't force them to choose that single area for mule deer hunting. This year, there were 125 permits.

The best mule deer buck habitat was on Beef Ridge in the Sleeping Child and Skalkaho Creek area. In past years, the biologist counted upwards of one buck for every two does.

"I think we exceeded that this year," he said. "I think we are really seeing the fruit of efforts to grow big bucks. ... (HD 270) has become the blue-ribbon place for antlered buck deer. It is probably one of the most sought-after permits in the state."

The winter survey focuses on classifying buck and fawn numbers. In the spring, Jourdonnais will take to the air again to see how fawns survived the winter months.

On that last day of the survey, the biologist saw a couple of mountain lions and all 10 members of the Divide wolf pack.

"It's hard to say what we'll find this spring," he said. "Weather and predation can have an impact."

Perry Backus can be reached at 363-3300 or pbackus@ravallirepublic.com.

Along with deer they sought, aerial surveys conducted this week in the Bitterroot Valley gave Fish, Wildlife and Parks officials glimpses of q…

On two days this week, Montana Fish, Wildlife and Parks biologist Craig Jourdonnais (pictured above) and helicopter pilot Joe Rahn counted mule deer on the rugged east side of the Bitterroot Valley between Sula Peak and Beef Ridge. The deer population appeared to be faring quite well following the annual hunting season.

Every year thousands of hunters hope to draw a permit for a chance to hunt large mule deer bucks like this one spotted last week during the annual winter deer survey.
© Copyright 2020 Ravalli Republic, 232 Main St. Hamilton, MT | Terms of Use | Privacy Policy
Powered by BLOX Content Management System from TownNews.com.
You don't have any notifications.