It’s so windy the back of my wide-brimmed hat is chattering like a kite fighting a strong breeze.

Ducking out of the wind atop a rocky knob, the spring sun melts away my body’s weary memories of winter. Summer can’t be far off.

From my perch above Bear Canyon at about 5,800 feet I have a bird’s-eye view of the surrounding terrain. Straight ahead the canyon carves a narrow furrow up the Pryor Mountains. A group of six turkey vultures lazily circles on updrafts above a bend in the canyon, their shadows moving quickly across the cliffs below.

To the right, my view is up the canyon as it squiggles toward the still snowy 8,700-foot top of the Pryors beyond. Lumpy, cave-riddled cliffs overlook the canyon as it climbs, scattered pine trees providing a dark green contrast to the tan- and blush-colored cliffs.

To the left the Beartooth Mountains shimmer blue and white in the distance. The juniper-dotted foothills of the Pryors provide a stark distinction to the Beartooths, scrubby high-elevation desert meets alpine forest fortress.

I arrived at my majestic lunch site by trekking up the Rocky Juniper Trail about 1.2 miles, gaining about 600 feet along the way. The route is one of several featured hikes on the Pryors Coalition’s website, which is a great source for info on other hikes and the history and geology of the region. With detailed notes of where to go, photos and a topo map to highlight the way, the website provides an easy-to-understand guide.

Too lazy to continue along the suggested route, I decided to climb a low saddle on a cliff overlooking Bear Canyon. Had I continued on another quarter mile I would have reached a junction with two other trails: one that drops via switchbacks into Bear Canyon and another that connects to the parallel Big Sky Trail. Those two trails provide the opportunity for hikers to make a loop out of their day hike.

The trek from the bottom of Bear Canyon back to the trailhead of Rocky Juniper is about 1.4 miles. Taking the Big Sky Trail back would add another two miles after reaching the bottom. If this is too long a hike, consider parking another car, or leaving a mountain bike, to shorten the trip between trailheads.

The rocks along the Rocky Juniper Trail are one of the main attractions. Not far from the beginning the trail moves between two balancing boulders that guard the entry. Shortly thereafter, large stones along the trail appear to have been squashed under enormous pressure until they are as wrinkled as raisins and as bulbous as the "Star Wars" character Jabba the Hutt. After a steep climb along an old road, the trail enters a gopher-hole dotted meadow, just beyond which glittering white quartz are scattered. The crystals gleam like frost despite the heat.

As the trail climbs it winds through patches of Utah juniper, which according to the Pryors Coalition website is the northern limit for the plant. Most of the other juniper in the Pryors is Rocky Mountain juniper.

The dead trees are spectacular in their contortions. The skeletal gray branches are twisted and gnarled. In some places the wood is so weathered it looks like rough fish scales standing on edge. The live trees, along with scattered sagebrush, provide a tart tinge to the air.

It took about 40 minutes of slow walking, taking photographs and gazing in wonder at the rugged country before I reached a saddle below a Sphinx-like rock outcrop. On the other side of the saddle the view up the flank of the Pryor Mountains opened up for miles, revealing dry washes and red hills leading up to the pine forest at higher elevations. Even with binoculars I could find no other living creature moving across that open expanse known as Horse Haven. It looks like perfect pronghorn country, but I’ve never seen one in the region. Although mule deer inhabit the countryside, evidenced by their tracks in the sandy soil or frozen in dried mud, they were likely hiding from the midday sun and wind.

After shedding a few layers of clothing to cool down, I started up the nearby hillside to overlook Bear Canyon. The wind rushing over the rocky ridge roared as if there was a whitewater rapid on the other side, constant and churning, the torrent of air stirring the juniper branches into arthritic motion.

The ridge was composed of shelf rock. Weather had carved out small caves under some of the limestone leaving ribs of harder rock exposed like veins disappearing into the soil. At the very top of the ridge the slab rock was dimpled by erosion and painted with orange lichen.

Following a snack, some sips of water and after glassing the surrounding hillsides with binoculars one last time, I reluctantly began hiking back down, deciding to follow the ridge paralleling Bear Canyon as far as possible. In places the ridge was a moonscape of rough rock, portions of which looked like bubbles frozen in midair. Swallows raced past with a tailwind. The turkey vultures returned and circled overhead as if to make sure my sweaty stench didn’t mean I was dead meat.

Walking through a thick juniper forest at the base of the ridge I startled a brilliant mountain bluebird that provided a flash of color. Just before exiting the trail I almost stepped on a small lizard atop a flower — which I later found out was a common sagebrush lizard. I speculated the creature had staked out the plant hoping a fly or bug would be attracted to the bloom and become an easy meal. The lizard was zen-like in his calm focus, unworried by my looming telephoto lens' presence. After several shots I left him to his work, slim pickings in a desolate yet entirely mesmerizing landscape.

How to get there

To reach the Rocky Juniper Trail take Highway 310 about 21 miles south of Bridger to Warren, a small collection of buildings where the nearby limestone mine ships its stone via rail. Turn left onto the Helt Road.

Drive 2.7 miles to a curve in the road and keep going straight. A BLM sign at the junction points to Bear Canyon (3.5 miles). At about 7.1 miles the road forks, stay to the left. It’s about another .4 miles to a sign for Horse Haven.

Turn left onto the Horse Haven Road and follow it about a half mile. On the left you will see a camping area and large rock fire pit. Just beyond is a section of jack-leg wooden fence across the trail up the Rocky Juniper Trail. 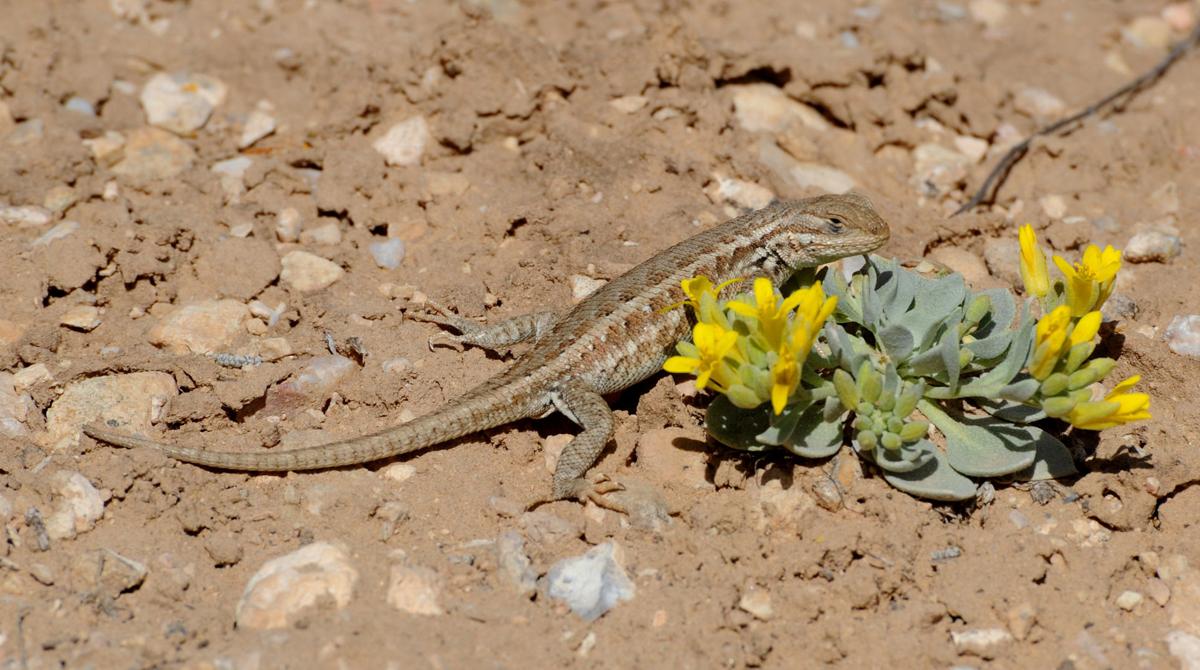 A common sagebrush lizard waits patiently for a bug to land on a flower in hopes of an easy meal. 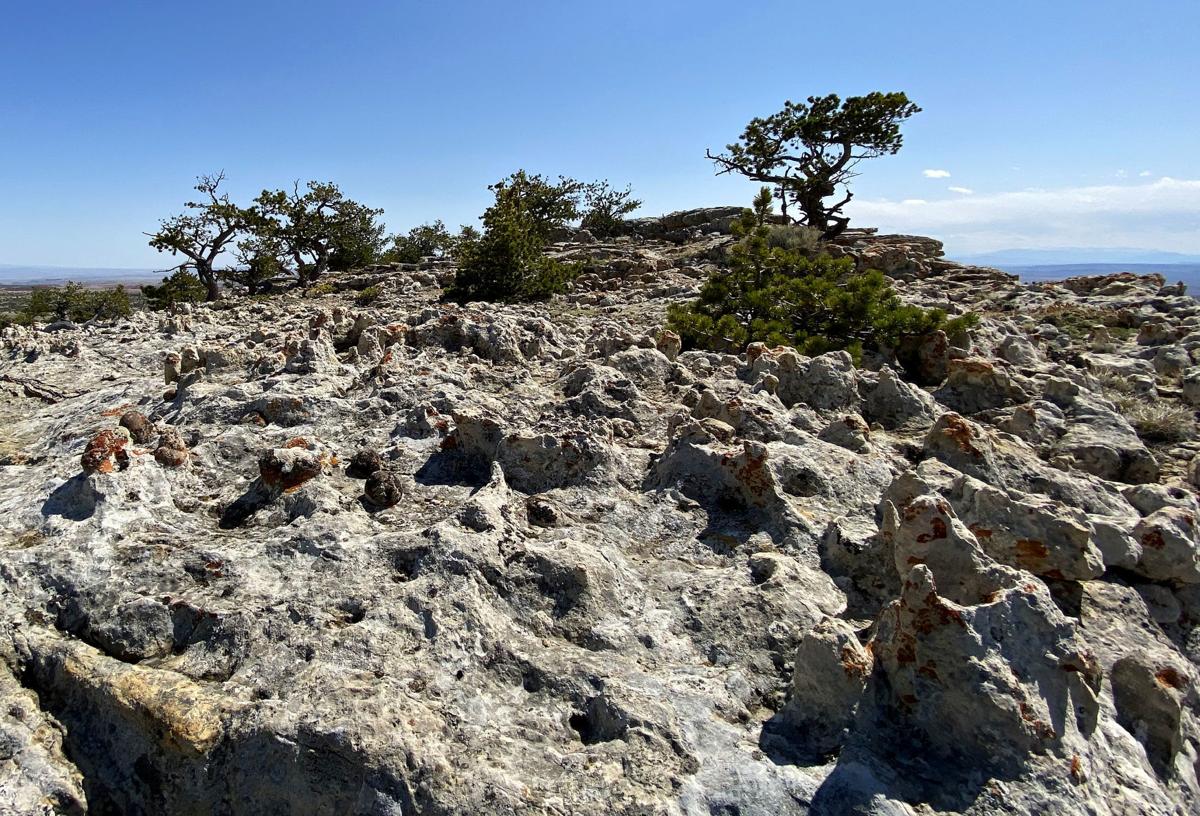 Limestone eroded into odd shapes tops a ridge above Bear Canyon near the Rocky Juniper Trail. 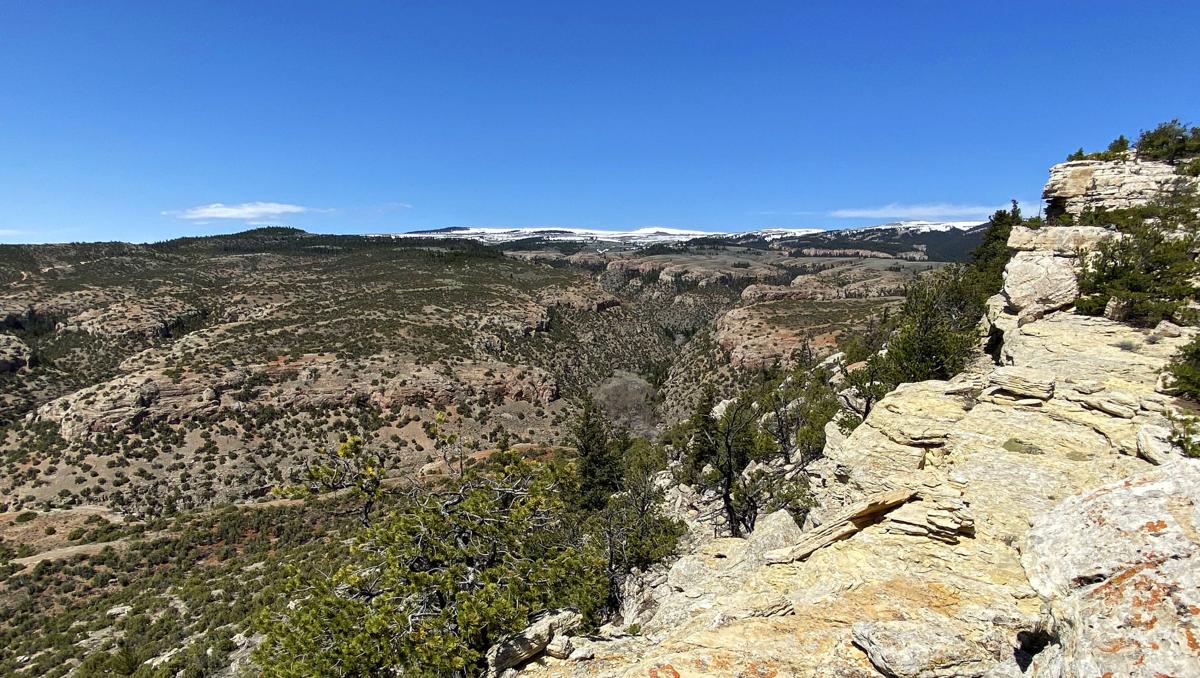 From this rocky ridge above Bear Canyon hikers get a vast view of the Pryor Mountains, its desert-like foothills and the Beartooth Mountains in the distance. 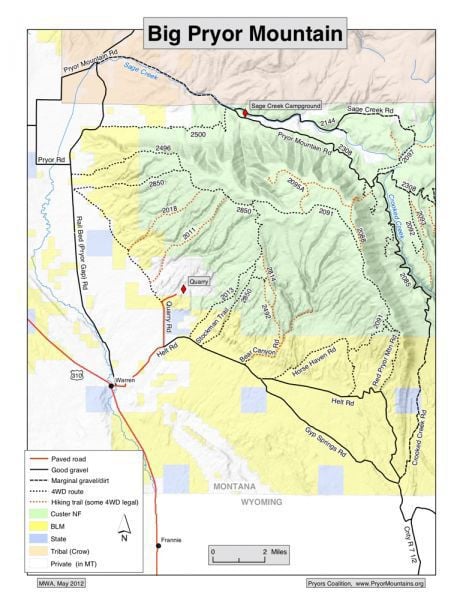 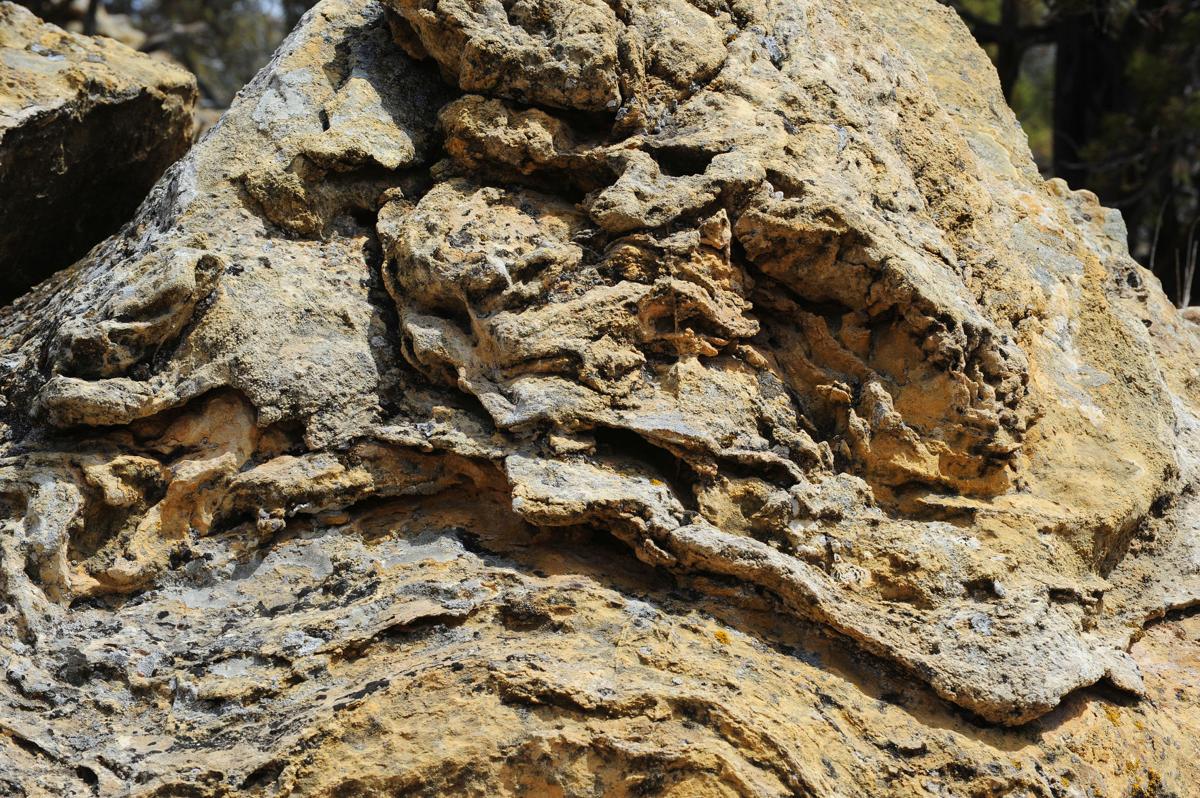 A boulder near the start of the Rocky Juniper Trail is wrinkled. 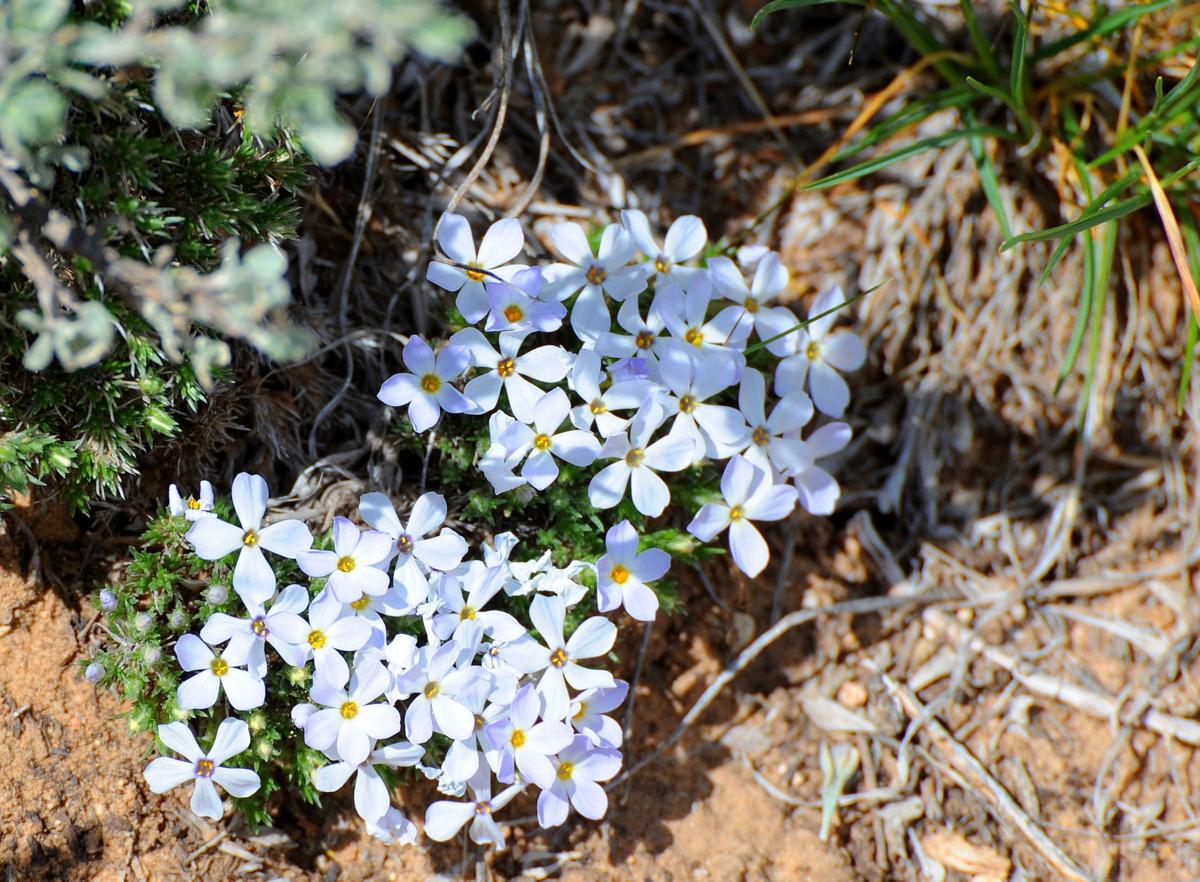 Hood's phlox grows in the shade of a sagebrush plant. 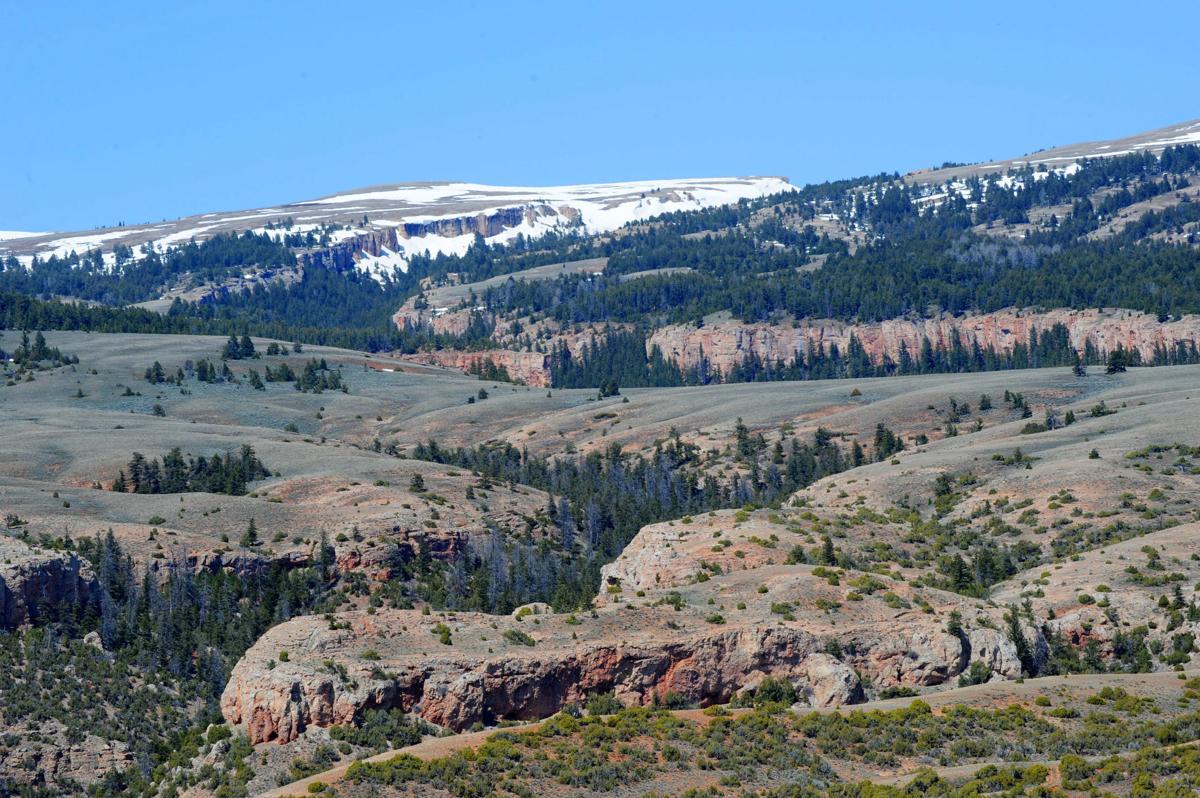 Bear Canyon climbs almost to the top of the Pryor Mountains, which are still capped with snow. 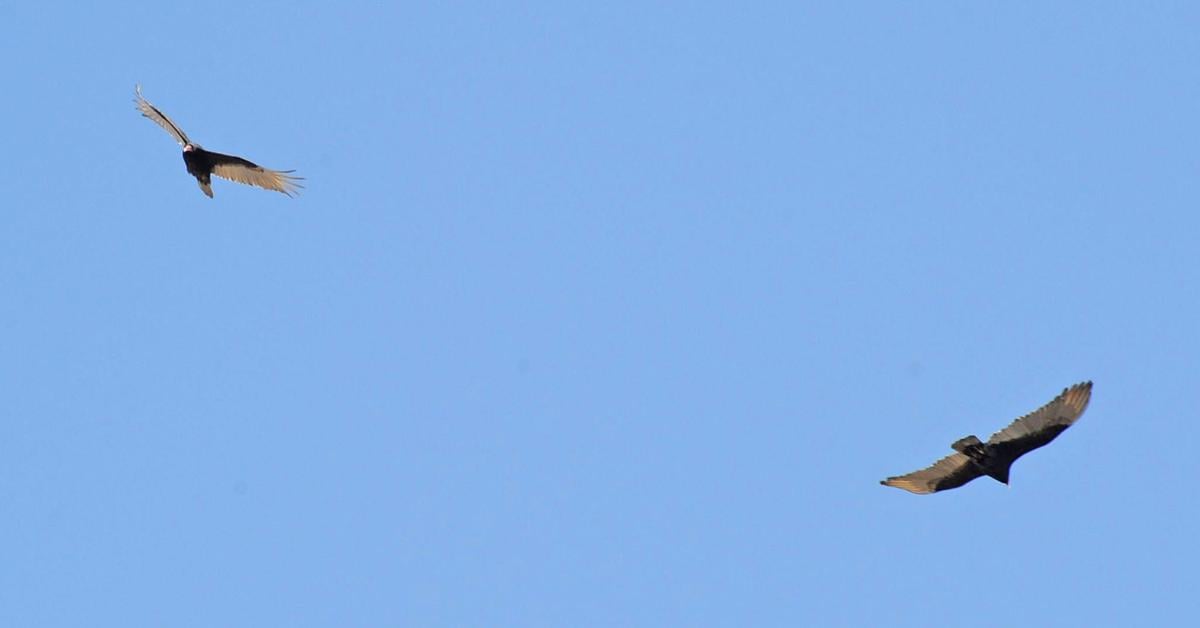 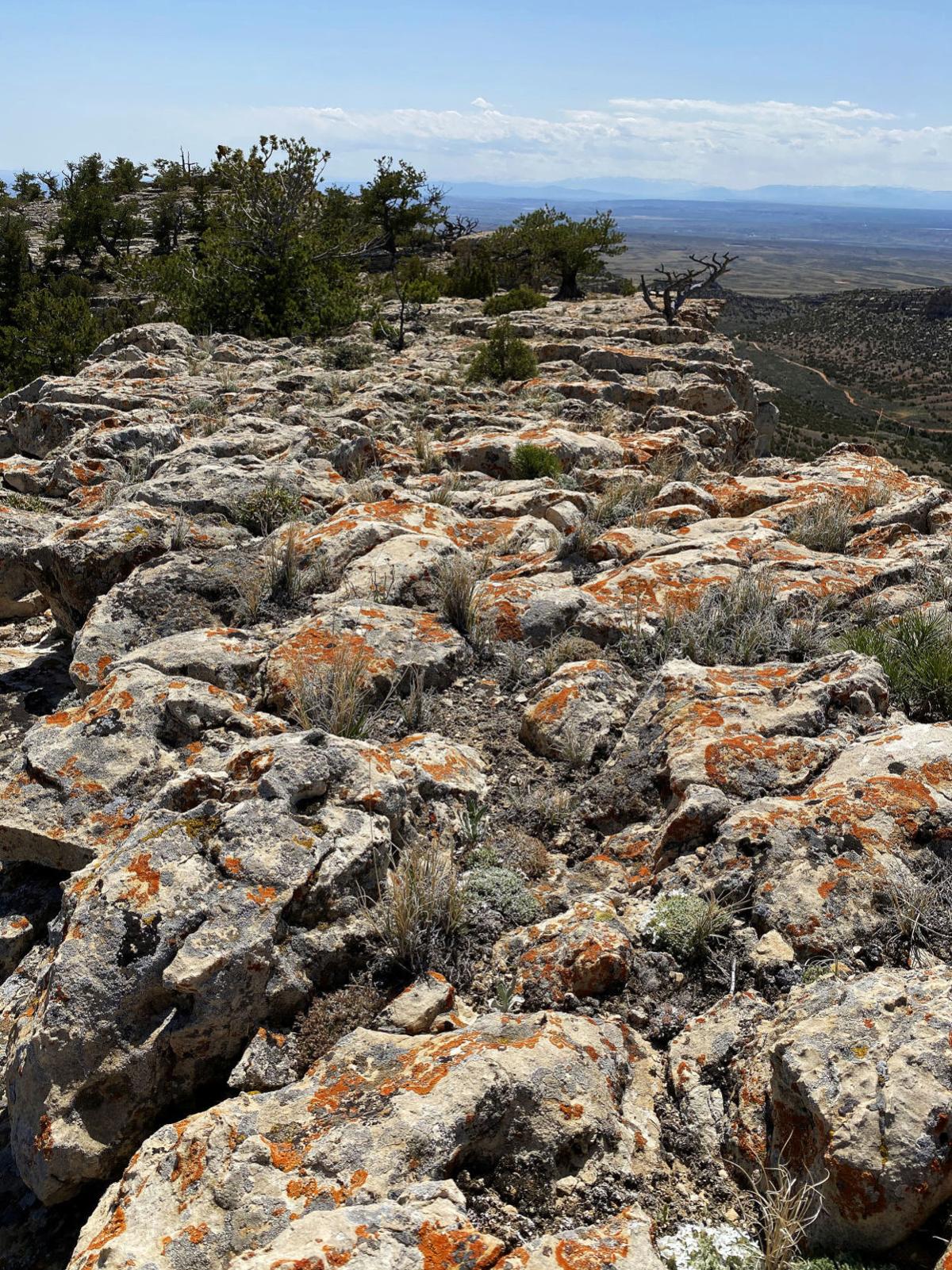 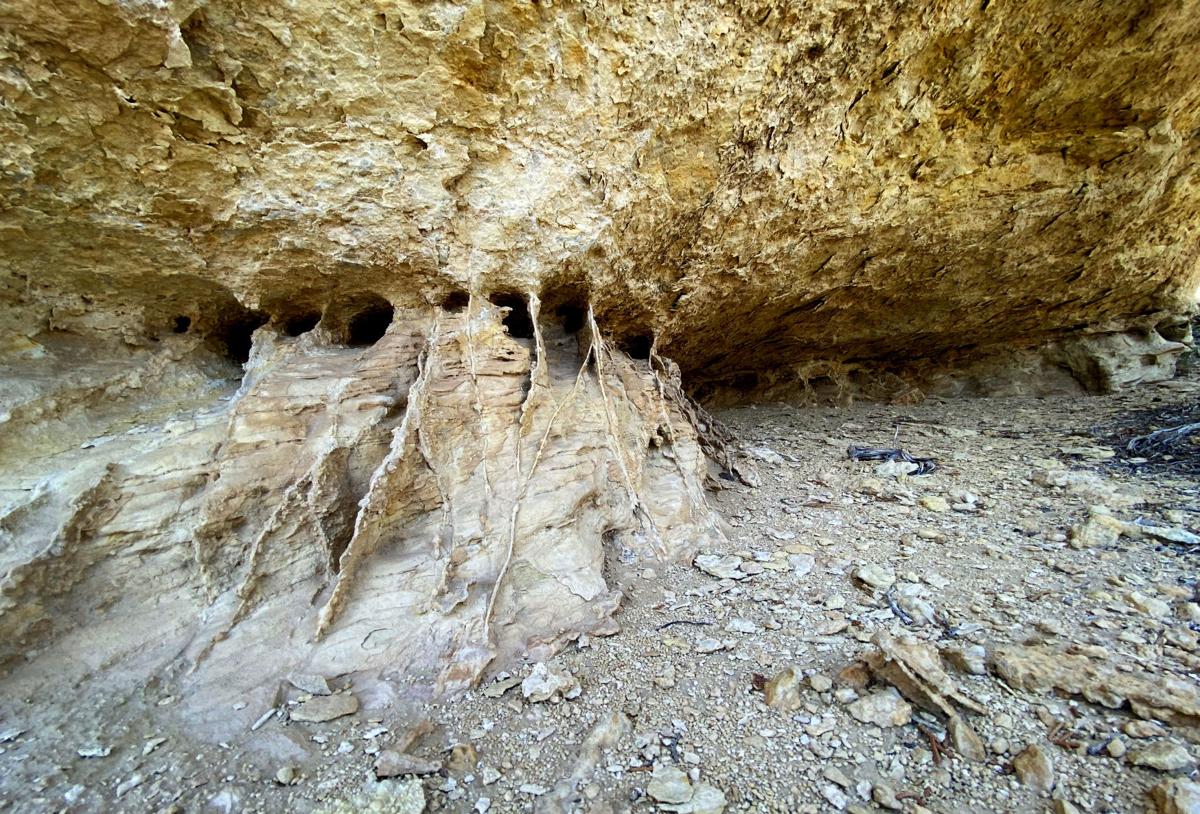 Veins of hard rock resemble roots in this overhang.