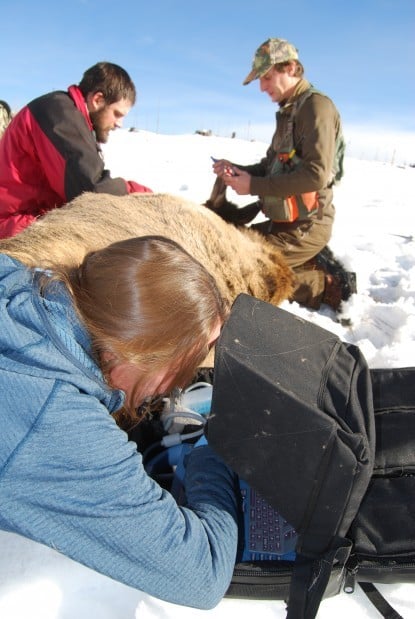 Kelly Proffitt and Mark Hebblewhite process an adult cow elk in the Nez Perce drainage of the West Fork. 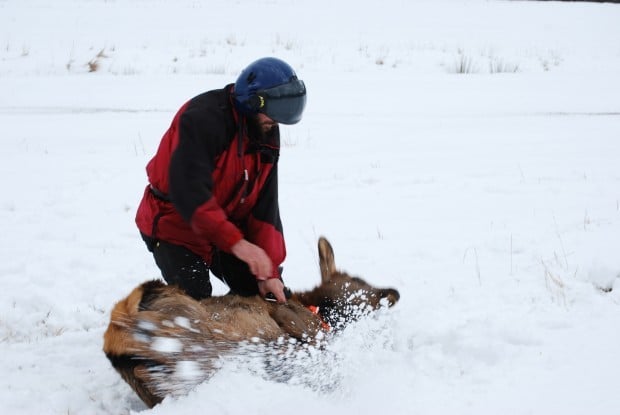 When researchers captured and tagged 66 elk calves this spring in the southern Bitterroot, they theorized that wolves wouldn't be the predator that keyed in early on the tiny critters.

Through the first six months of the study, only two calves were killed by wolves. Mountain lions were the main cause of mortality, with bears and a variety of mishaps and illnesses also taking a toll.

That could change dramatically now that winter has arrived.

"I don't think we expected to see a lot of wolf predation in the early summer months," said Kelly Proffitt. "The calves are small and not an important food source for wolves."

But now that the elk calves are considerably bigger and hampered by the arrival of snow, wolves may become a bit more interested in eating young wapiti.

"Wolf predation, if we're going to see it, will probably occur through the snow period," Proffitt said.

The study looks to document dynamics of an elk herd that has been struggling for several years in the southern Bitterroot. The study is a partnership between FWP and the University of Montana.

In the six months since researchers caught and tagged the young animals, 49 calves have either died or lost their tags.

Researchers didn't believe the 17 calves left in the east and west forks of the Bitterroot would provide a large enough sample to provide sound scientific information about winter mortality.

The week after the general rifle season ended, crews captured and tagged an additional 31 calves and 20 adults and fitted them with electronic monitoring devices.

In the past two weeks, three of those calves died, said Mark Hebblewhite, the University of Montana assistant wildlife biology program professor partnering with FWP in the study.

One ran into a fence. One appears to be killed by a wolf. The third was taken by a mountain lion.

Hebblewhite said it will be interesting to see if that trend continues through the winter months.

"One of the big data gaps from the studies across the West is elk calf survival through the winter," Hebblewhite said. "When you look around the West, you can find a lot of studies on what kills elk during their first six months, but there are very few on what kills them in winter."

Hebblewhite was a little surprised by the large number of mountain lion kills during the first six months in the Bitterroot.

Of the 49 elk calves that either died or shook their tags, 22 were killed by cougars. Black bears took 11 and wolves two. The rest were undetermined.

"If those numbers remain consistent through next summer, I think it will be a higher number of mountain lions kills than many people would have thought," he said. "I think people thought wolves would have played a bigger role.

"Now we'll see if mountain lions dominate through the winter months as well or if wolves play a bigger role," Hebblewhite said. "It will be interesting to see what happens over the winter."

Researchers also pregnancy tested the cows that were captured recently.

Just like last year, the number of pregnant cows in the West Fork was relatively low compared to the East Fork and more productive areas in the state.

"That's lower than what we've seen in the greater Yellowstone area herds, but it not necessarily unusual," she said.

Those lower pregnancy rates have been documented in places with marginal elk habitat in parts of Oregon, Washington and in some areas of northwest Montana.

In the East Fork, 73 percent were pregnant this year, but the sample was skewed a bit because two or three of the animals were very young. Last year, researchers documented a 92 percent pregnancy rate in the East Fork, which is similar to other Yellowstone area herds.

This summer researchers will begin taking a hard look at the vegetation and forage in both the east and west forks to see if that could be playing a role in population dynamics between the two areas.

In January, the GPS collars on cows captured last year will begin to drop off. After retrieving those from the field, researchers hope the information the collars have documented about elk movements will offer some additional new insights.

Another 20 cow elk will be captured in February and outfitted with GPS collars.

Kelly Proffitt and Mark Hebblewhite process an adult cow elk in the Nez Perce drainage of the West Fork.