Become a Member
Read Today's E-edition
Share This
What ravens, dogs, sheep and grizzlies all have to do with a Big Hole ranch
0 Comments
Share this 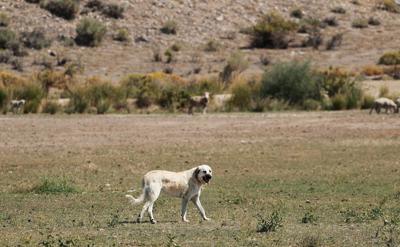 This story is part of the Lee Enterprises series "Grizzlies and Us." The project examines the many issues surrounding the uneasy coexistence of grizzly bears and humans in the Lower 48, which have come  into focus in recent years as the federally-protected animal pushes farther into human-occupied areas. The 10-part series, comprised of more than 20 stories, was produced by outdoor reporters and photojournalists across the Rocky Mountain West.

Black bears, mountain lions, coyotes, foxes, wolves and eagles have killed a few sheep over the years on Erik Kalsta’s ranch on the Big Hole River.

Ravens, though, have massacred his lambs. And in a strange roundabout way, it may be grizzly bears that actually help solve Kalsta’s raven problem.

“I would not hesitate to say we lost at least 50 lambs last year to ravens,” Kalsta said.

The ravens come for the newborn lambs in the spring, when heavy snow immobilizes the flock. The large, black birds have even been known to peck out the eyes of the ewes.

For context, throughout all of Montana, sheep producers were reimbursed for a total of 15 confirmed depredations by grizzlies in 2020. Occasionally, grizzlies do kill large numbers of sheep on a single ranch. For example, a grizzly was euthanized after killing 40 sheep on a Toole County ranch in 2019.

Kalsta’s ranch is situated near a garbage dump, where the open containers beckon ravens in droves. Before the dump went in, Kalsta said there were just a few ravens in the area at a time, but the lure of garbage later increased that count to anywhere from 30 to 40 birds.

“That open food source in that dumpster keeps the ravens from migrating, and when the lambs start hitting the ground, it gets pretty ugly pretty fast,” Kalsta said.

Beaverhead County teamed up with the nonprofit People and Carnivores to secure the dump with hydraulic lids at the end of the summer. That was done, at least in part, to prevent the dump from drawing grizzlies.

“As grizzly bears are expanding, especially here around the Beaverhead County area, we just wanted to get ahead of the game and get these sites secure,” said Kim Johnston, field project manager for People and Carnivores.

In fall of 2020, a grizzly was sighted 6 miles west of the refuse site as the raven flies.

The ironic thing about the raven predations is that Kalsta and his wife, Jami Murdoch, have taken extraordinary proactive measures to mitigate predation from larger, furred carnivores.

By working with People and Carnivores, and using game cameras and livestock guardian dogs fixed with tracking collars, the ranchers have become experts on predation and how to avoid it.

The couple purchased Judge, their first guardian dog, primarily to deal with coyotes 11 years ago. Kalsta said attempts to manage coyotes by lethal means often fail. For example, area ranchers killed some 140 coyotes one fall, but the predation didn’t go down.

“If you start impacting the coyote population too much, then they go into a hyper breeding rate,” he said.

Instead, he looked into prevention methods. And that method's name was Judge.

Judge would cover an incredible amount of ground to protect the flock. When he was just a young pup, he was ambushed by a coyote pack and returned with a limp. But Judge kept doing his duty.

“And then all of the sudden, there was no problem,” Kalsta said. “He didn’t have to chase the coyotes. They didn’t come in. It’s been pretty good since.”

Judge, however, has since died.

To replace him, Kalsta purchased two female dogs, Winter and Storm, six years ago, and a puppy named Chinook - a Judge in training. All three dogs are Akbash-Anatolian Shepherd mixes, bred to protect livestock from predators. Another dog, Laloush, guards the area around the ranch buildings.

But their pack of loyal guard dogs is only part of their strategy for safeguarding their flocks against predators. This is where things get more  high-tech.

Johnston devised an affordable tracking system with a long battery life for the dog collars using SPOT GPS. Now, every ten minutes, the ranchers receive a location from Winter and Storm, and track their movements on a cell phone application.

The system has led to some important discoveries.

Following the maps of dog movements, they’ve discovered mountain lions moving through the property. They’ve found sheep stuck in drainages multiple times that they otherwise wouldn’t have known about.

“I was in Minnesota in March,” Murdoch said, “and I got an alert my phone, and I was like, you need to go check why the dogs are down the country. They were down with their sheep who'd gone off on a lark.”

The nonprofit and ranchers together recently secured a pasture with electric fencing for their sheep in the event of a predator problem.

Unfortunately, the clever ravens have been by far the biggest threat to the ranch, and are the one predator the dogs have little effect on. The ranchers are hopeful that hydraulic lids at the refuse site will do the trick, as well as eliminate potential attractants for grizzlies.

In the event grizzlies come through anyway, Kalsta and Murdoch have the dogs, the cameras, and the electrified safe zone ready.

Should grizzlies or any other predators show, Kalsta said his pups will sound the alarm.

“I think we’re going to see a change in behavior,” Kalsta said. “That’ll be the first thing. Hopefully we see that change before we see actual predation. That’s our hope.” 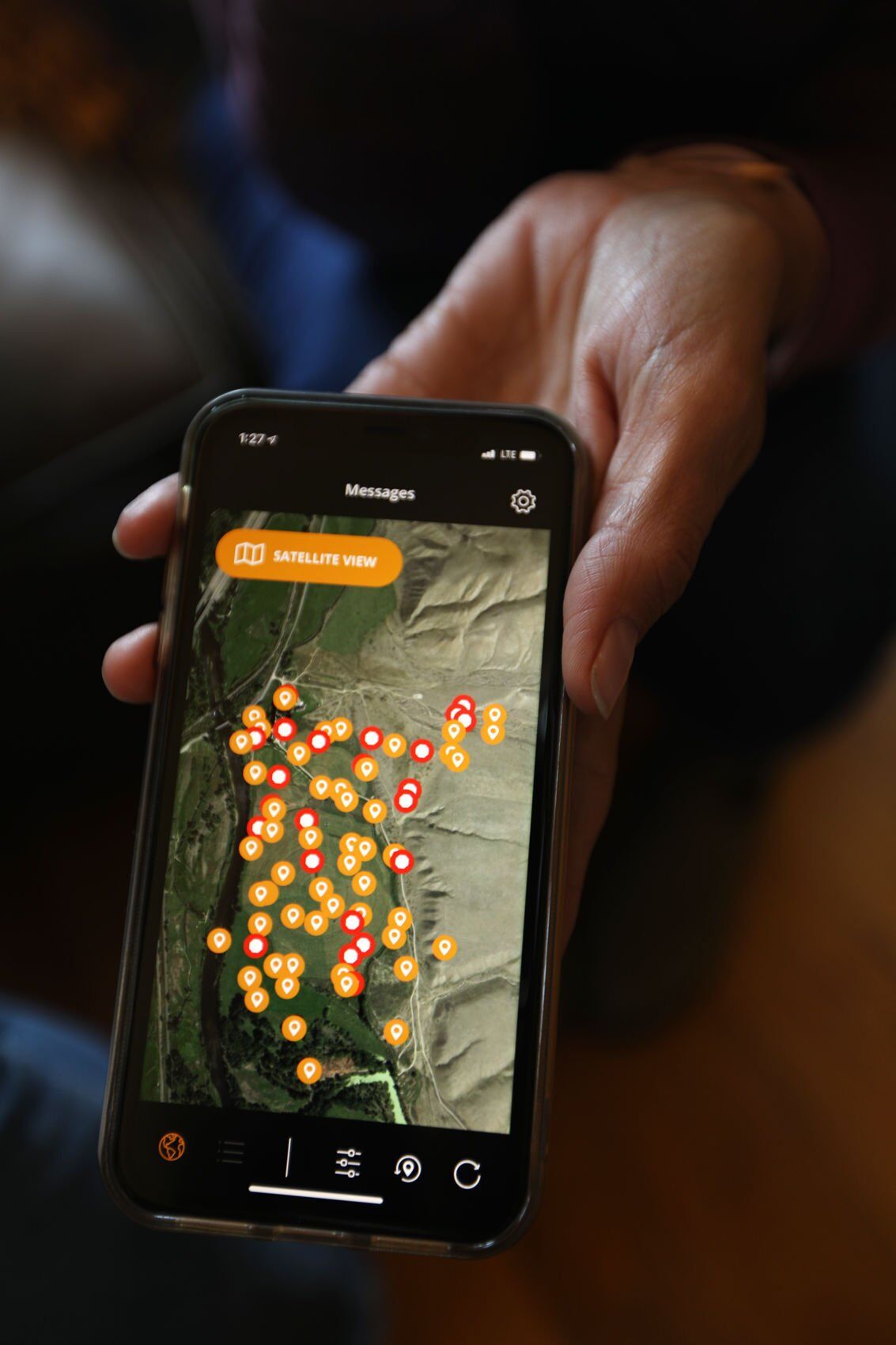 Jami Murdoch's smart phone records the the movements of her 6-year-old Akbash-Anatolian Shepherd mix guard dogs, Winter and Storm. Murdoch and her husband Erik Kalsta track the dogs' movements to protect their sheep flock from predators at their ranch near Glen in Southwest Montana. 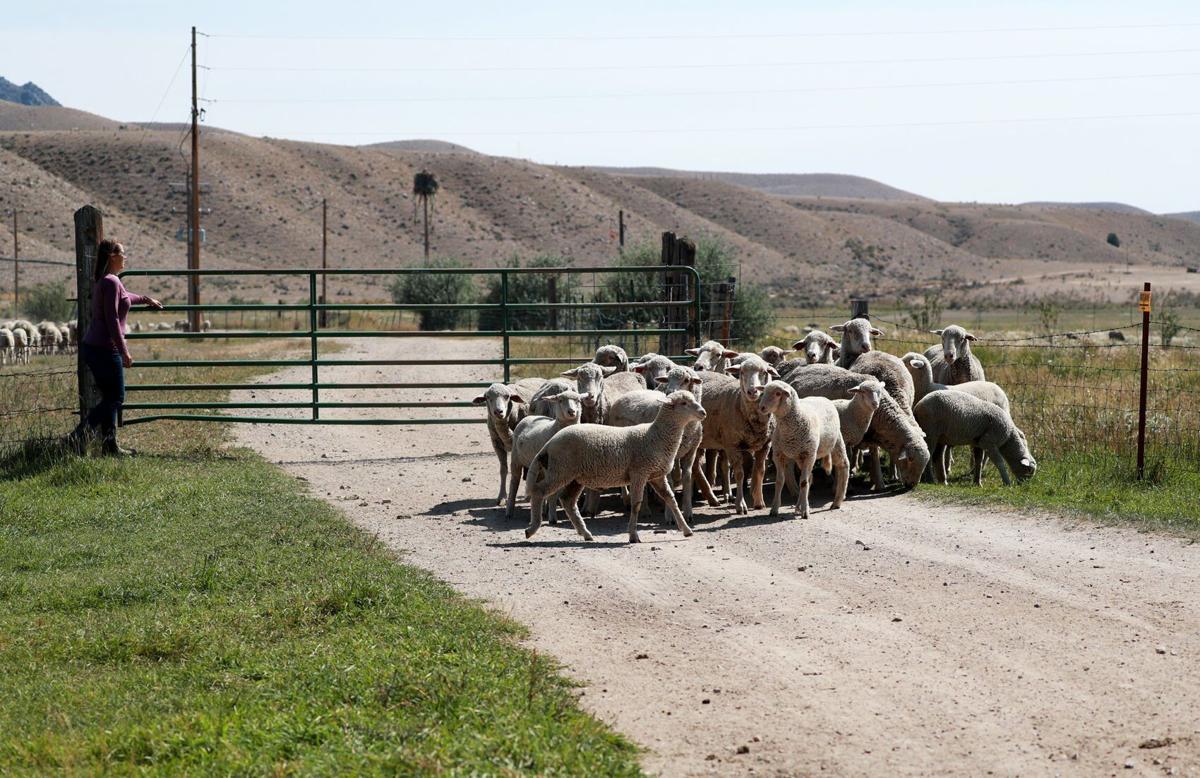 Jami Murdoch opens the gate for sheep on the ranch she and her husband own near Glen. The couple uses livestock guardian dogs to protect their sheep from predators. 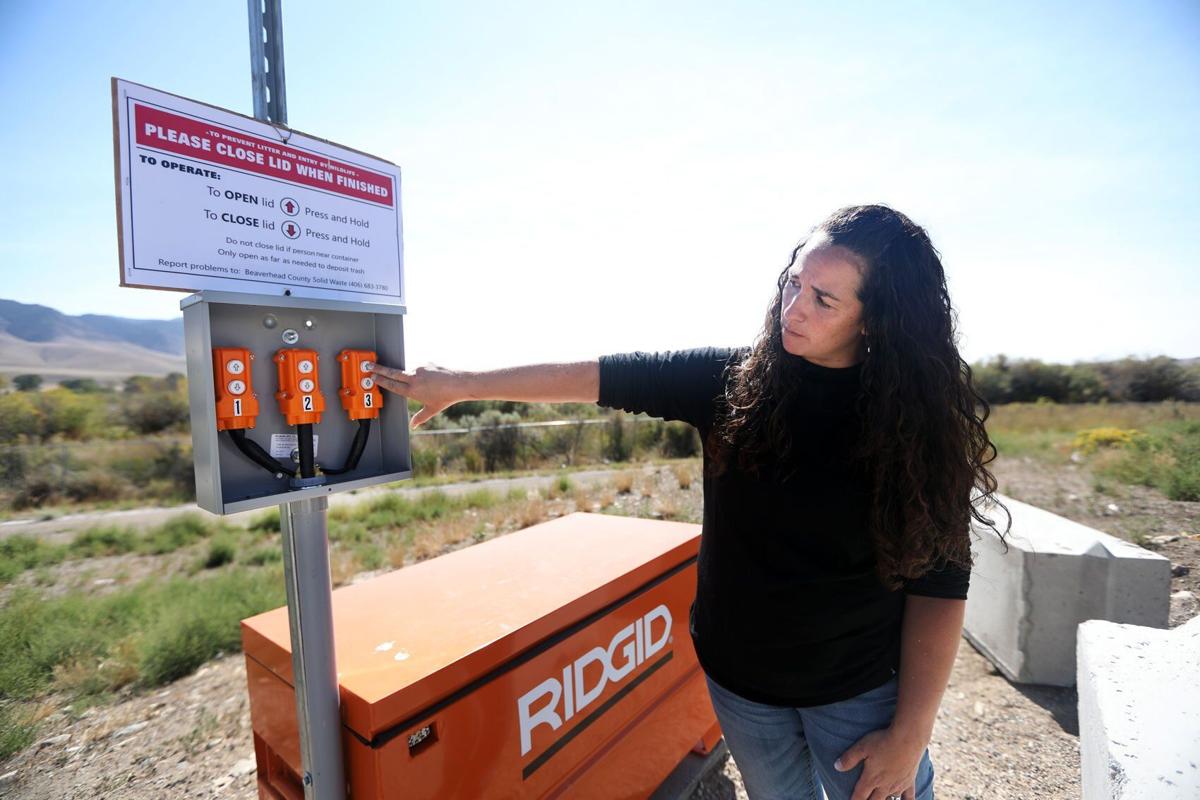 Kim Johnston, field project manager for non-profit People and Carnivores, demonstrates the use of hydraulic dumpster lids at a Beaverhead County dump located off I-15 between Glen and Melrose. The lids prevent attracting wild animals to the site, including ravens and bears. 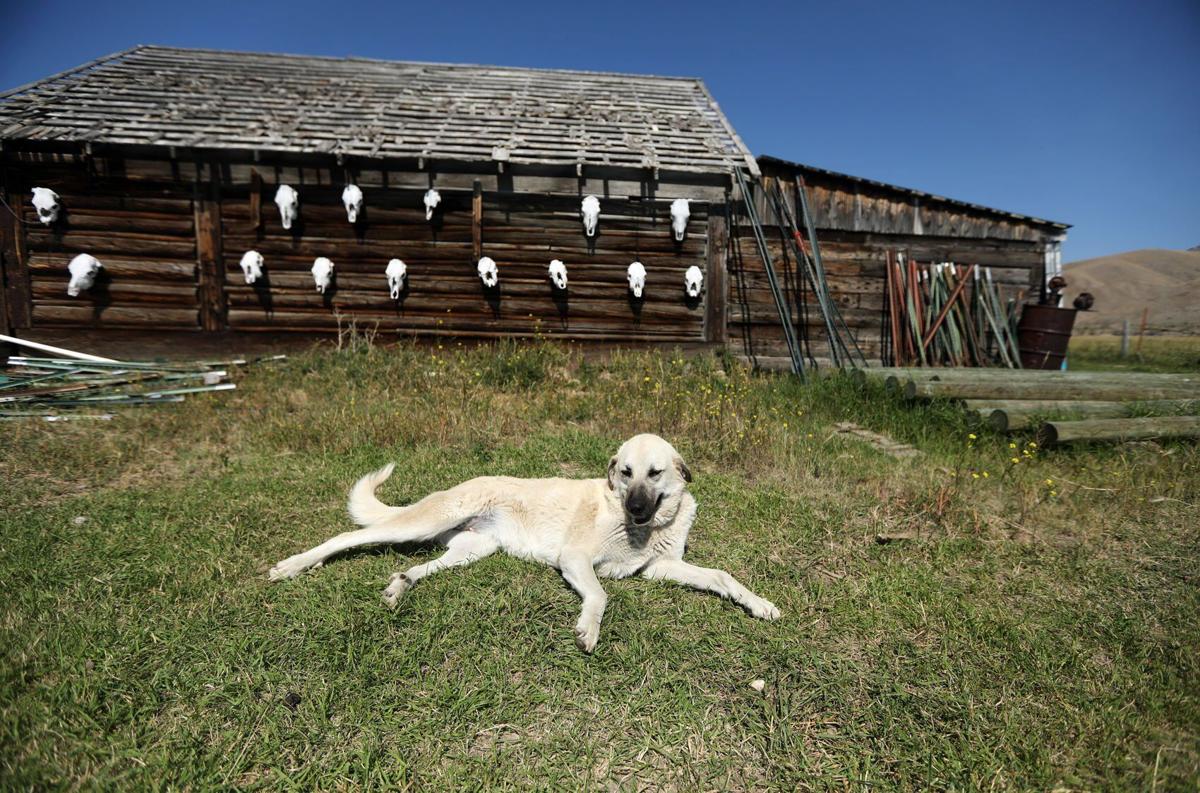 It's mid afternoon on a hot day at the end of August and Winter, a 6-year-old Akbash-Anatolian Shepherd mix, is ready for a nap. The roaming guard dog has been patrolling all night long to protect sheep on a Glen ranch from various predators. 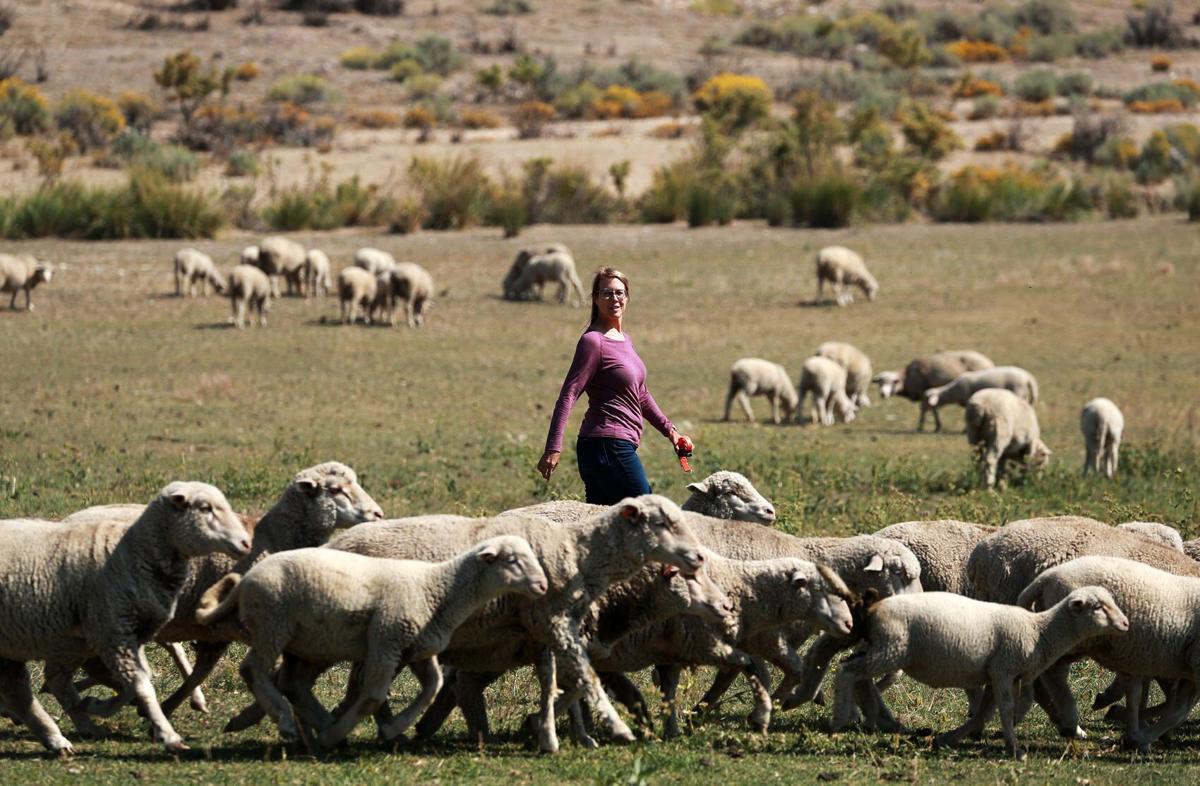 Jami Murdoch walks among her flock at the ranch she and her husband own near Glen. The couple uses livestock guardian dogs to protect their sheep from predators.