Become a Member
Read Today's E-edition
Share This
Wayward griz shows how bears use the land, get in trouble
0 Comments
Share this 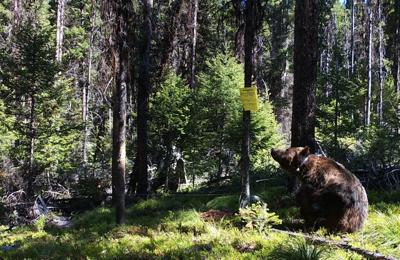 Lingenpolter’s trying to prove it.

Weighing about 360 pounds at the time of his mug shot, the 4- or 5-year-old male grizzly bear is an explorer, a renegade, and a repeat offender with an uncertain future.

His name comes from the Lingenpolter township where he first got into trouble near Gold Creek in October 2020. That area lies in between the two big ecosystems designated for grizzly bear recovery.

While the federal Endangered Species Act has given grizzlies protection throughout the Lower 48 States since 1975, their growing presence in places they haven’t inhabited for more than a century have present-day humans on edge.

As Lingenpolter roams, wildlife managers and a non-profit are following in his tracks, trying to prepare people in the communities he visits for the time more bears arrive. In some of those places, Lingenpolter’s the first grizzly they’ve ever met.

Lingenpolter introduced himself by raiding a birdfeeder, a gateway drug for bears, by a private home. Next, he fed on the birds themselves – domestic ducks.

Rory Trimbo, FWP’s grizzly specialist in Anaconda, responded to the incident. The bear was trapped, fitted with a radio collar and relocated to the Scapegoat Wilderness northeast of Ovando.

Trimbo and U.S. Wildlife Services officials advised the landowner to consider securing the domestic animals with an electric fence, for which a cost-sharing program is available from agencies and non-profits. The landowner declined.

It wouldn’t be the last time someone called about Lingenpolter.

Trimbo hoped that the collar’s GPS signal would show Lingenpolter staying out of trouble in his new home. Instead, the bear wandered south toward Gold Creek a while. From his collar data, it appeared he made numerous attempts to cross back over I-90 but was unsuccessful. The bear turned tail and jetted way back up northwest of Seeley Lake to den for winter in the Mission Mountains.

In March of this year, Lingenpolter was rearing to see some new country and try new things. He got into a chicken coop near Drummond in late April, spent some time in the Garnet Range east of there, and moseyed back to Interstate 90 now and then, apparently to consume road kill or attempt crossing.

Next, the born rebel crossed the freeway and made for the Flint Creek Range, where grizzlies are rarely sighted.

A 2017 study on potential grizzly corridors between the NCDE and GYE placed special emphasis on the Flints and ranges to the southwest of there. Those corridors might represent a way to connect the two recovery areas. But they also expose grizzlies to thousands of square miles of new habitat and new challenges.

Lingenpolter strolled south. He swung within 10 miles of Philipsburg and within a mile of Georgetown Lake to the East Fork Reservoir, and into the Anaconda-Pintler Wilderness.

Lingenpolter then found the small cluster of homes at Moose Lake, some 20 miles southwest of Philipsburg.

Someone accidentally left the sliding door open on a barn. Lingenpolter slid inside and gorged himself on a bucket of horse pellets.

After landowners figured out what happened, they padlocked the door. When Lingenpolter came back, he ripped the door off.

“Because he already got into that attractant, he knew what was in there,” Trimbo said. “He knew it was worth it. It was a 100-plus-year-old barn. For him it probably took some effort, but it was probably easier than you might think.”

Trimbo wrapped the barn in electric fencing, and he doesn’t believe Lingenpolter returned.

The bear wandered southwest almost to Sula, not far from the Bitterroot Valley. During the U.S. Fish and Wildlife Service’s pilot DNA and camera study across southwest Montana this past summer, grizzlies were only caught on camera at one of 140 sites. Two separate grizzlies smiled for the camera at the same site just east of Sula at the headwaters of the East Fork Bitterroot River. One of them was Lingenpolter. That was on June 14.

The timing of Lingenpolter's trip toward the Bitterroot may have biological significance, said Jennifer Fortin-Noreus, grizzly bear biologist and project lead for the U.S. Fish and Wildlife Service.

"What's interesting is that his points are fairly localized the majority of the season, except during the month of June, which is also breeding season," she said.

Lingenpolter then turned around and headed all the way back to the township of his namesake, and hit the same property where he’d found the ducks. This time he dined on chickens in early July.

He came back two nights. But unlike in 2020, he didn’t fall for the culvert trap Trimbo set up.

He then returned to the Flints. Trimbo stopped receiving a satellite signal from the bear’s collar on Aug. 12. By driving around in the area and using a handheld VHF receiver, Trimbo finally picked up a signal Sept. 17.

Lingenpolter was still out there in the Flints, and Trimbo was relieved.

Hunters reported a grizzly wandering into their camp in the Flints earlier that month. Could it have been Lingenpolter?

“Possibly,” Trimbo said. “It sounds like they jumped in their truck (for safety). And once the bear left, they ended up moving camp out of there.”

In late October, FWP again picked up a VHF signal from the collar, this time from aircraft, and Lingenpolter was still in the Flints. What looked like a possible den was observed in the vicinity.

Lingenpolter’s journey demonstrated how an NCDE bear might end up in the Bitterroot Ecosystem, another recovery zone where bears are occasionally sighted but there is no known resident population. And he wasn’t far from the Big Hole Valley, equidistant from the NCDE and GYE populations.

What’s more, Lingenpolter crossed I-90 in his journeys. That freeway is perhaps the greatest obstacle for bears between populations. FWP bear biologist Cecily Costello estimated that he made at least 46 attempts to cross over a total of 53 days during fall 2020 and spring 2021.

“This suggests the I-90 transportation corridor, which also includes a railway, is at least a partial barrier to movement of wildlife,” she said.

Costello also noted that DNA analysis following Lingenpolter’s capture suggests his mother and father are bears that were known to live in the Missions, which likely explains his choice to den there. His movements away from his place of birth is an example of natal dispersal, she said, typical for young males.

“This is one of our first opportunities to document a natal dispersal event, technically outside of the NCDE ecosystem,” she said.

In most of the areas he traveled south of I-90, there have been few or no confirmed grizzly sightings in a century.

Wildlife managers are learning where bears may show up and where landowners should be educated on the basics of living in grizzly country, because it’s unlikely Lingenpolter’s alone out there. In Moose Lake, where residents had never seen a grizzly bear, non-profit People and Carnivores is busily distributing bear-resistant garbage containers.

Now, Trimbo is sounding the alarm that it’s time to prepare for grizzlies — for safety, property and bears alike.

“We say anywhere in western Montana you could potentially run into a grizzly bear. And I think that kind of proves it right there with what he’s doing.” 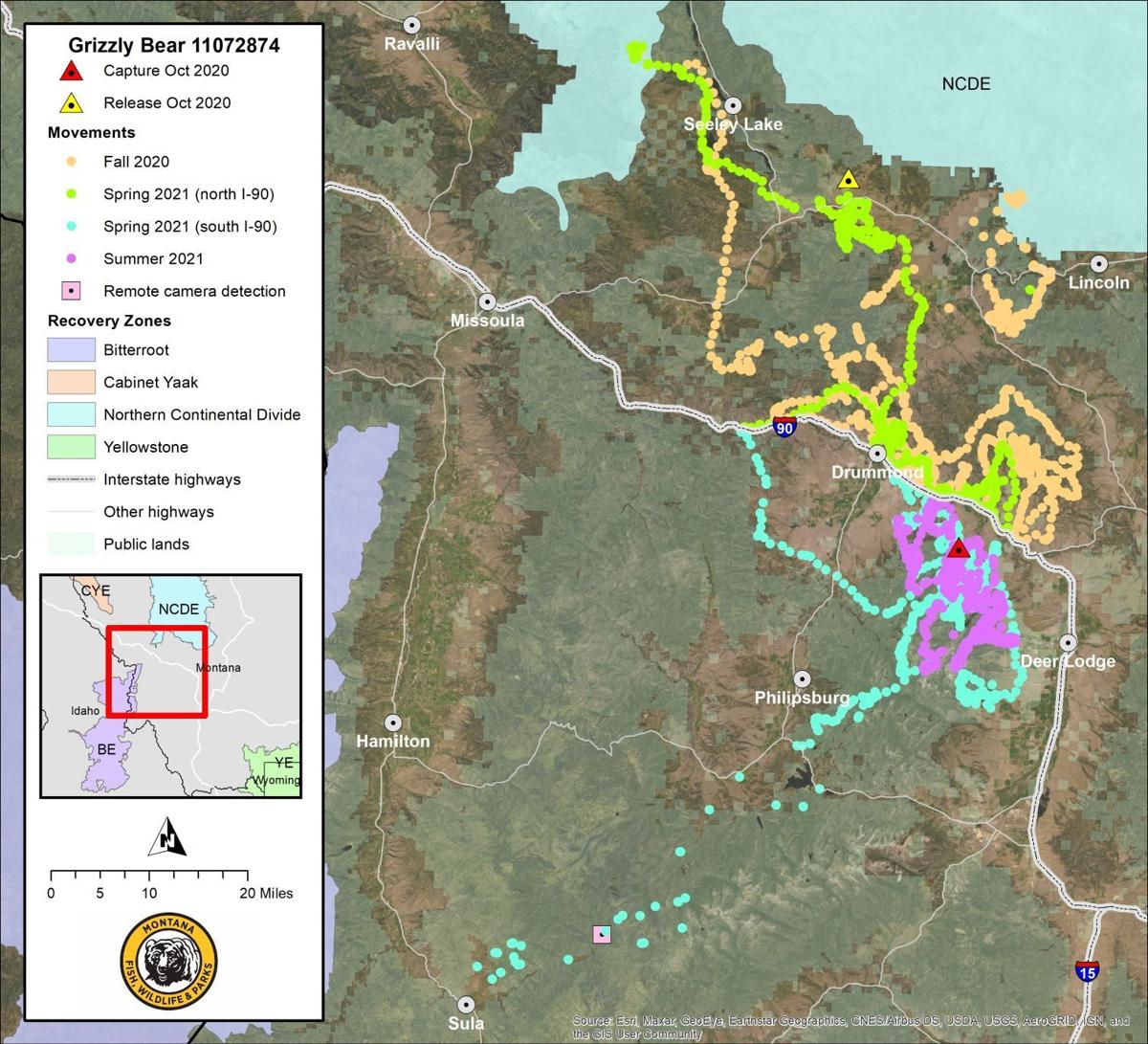 Montana Fish, Wildlife and Parks bear biologist Cecily Costello mapped the route a young male grizzly known as Lingenpolter traveled between fall 2020 and summer 2021. Lingenpolter's track is valuable to science for many reasons. In particular, it demonstrates the obstacle Interstate 90 represents to bears attempting to expand between core populations. 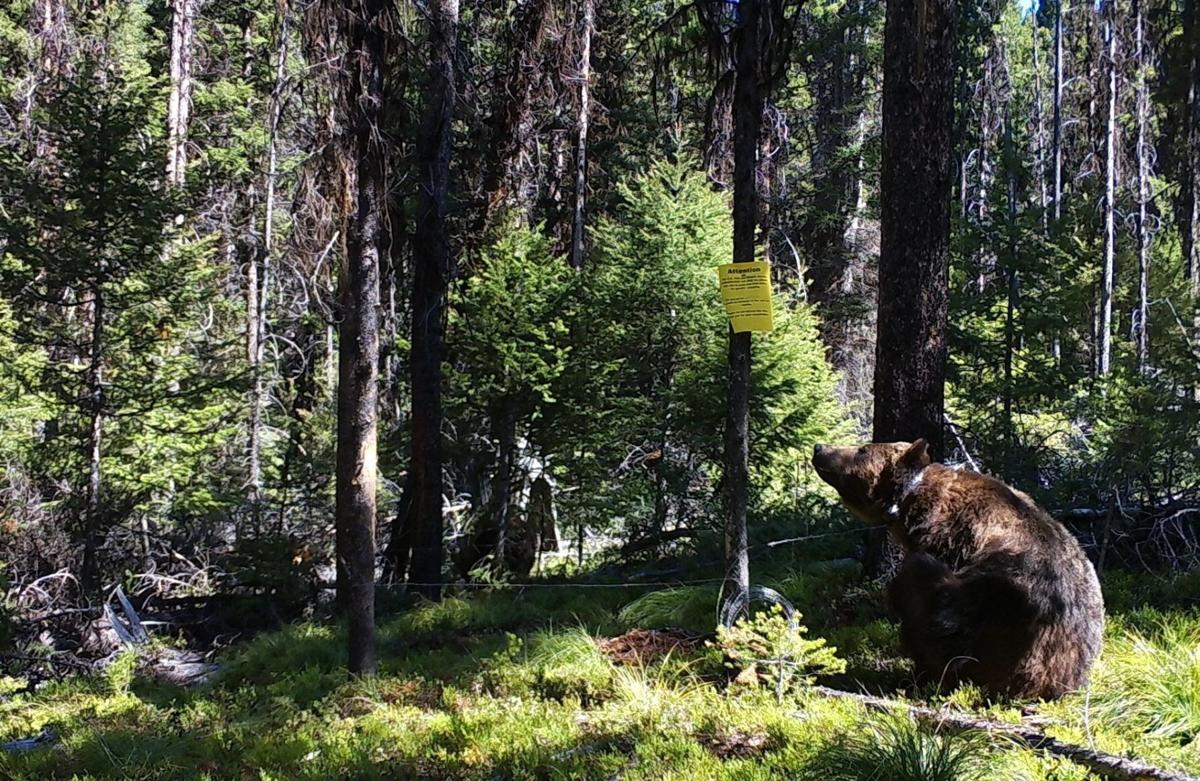 The young adult male grizzly known by Montana Fish, Wildlife and Parks personnel as Lingenpolter is captured on a game camera east of Sula on June 14 during the U.S. Fish and Wildlife Service's pilot hair snare DNA study. 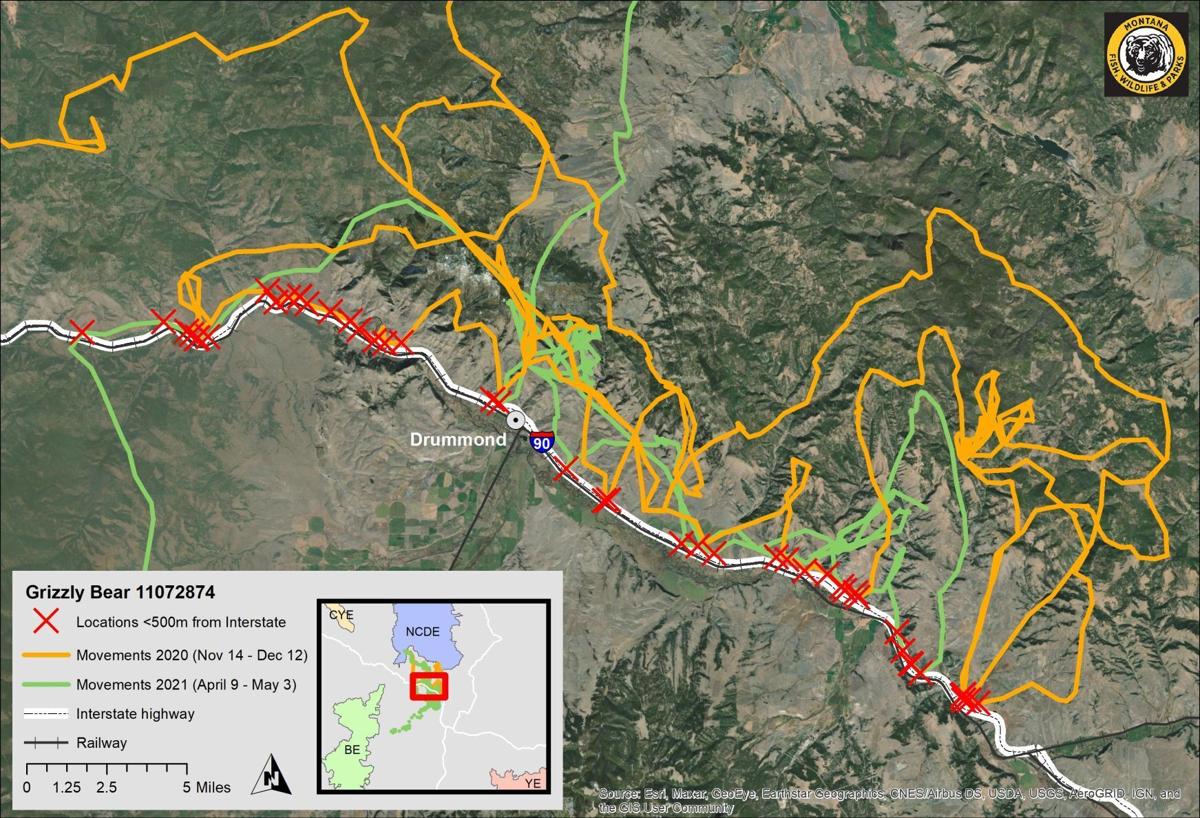 Montana Fish, Wildlife and Parks bear biologist Cecily Costello mapped the attempts of a young male grizzly known as Lingenpolter to cross Interstate 90 during fall 2020 and spring 2021. Costello estimated the bear made 46 crossing attempts over 53 total days during the period. Eventually, the bear succeeded, and roamed south. 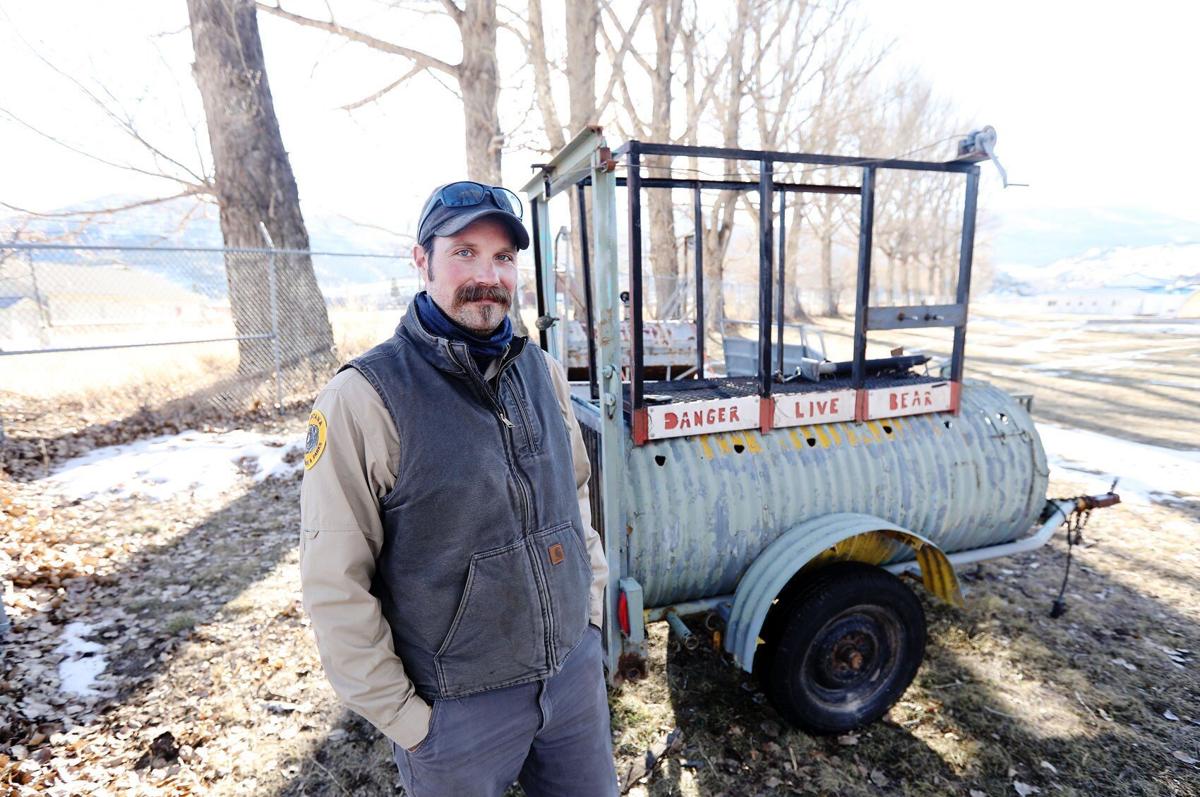 Rory Trimbo, a grizzly bear specialist with Montana Fish, Wildlife and Parks, stands in front of a bear trap mainly used for black bears in fall 2020.