Become a Member
Read Today's E-edition
Share This
Threat or thrill? Where do grizzlies go from here?
0 Comments
Share this 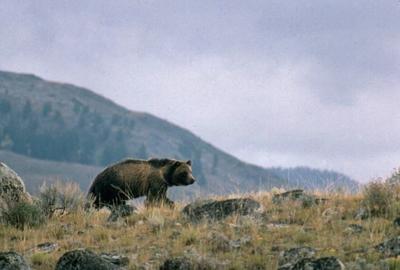 The sow more famous than Yogi and his pick-a-nick basket probably denned up with her four yearling cubs for the winter around Dec. 13, according to U.S. Fish and Wildlife Service monitors. After a year where a Jackson Hole, Wyoming resident got caught drawing 399 into her yard with molasses pellets, two of her cubs got trapped and radio-collared in a massive capture operation and the whole family got videoed passing through the touristy downtown on the edge of Grand Teton National Park, she’s earned a rest.

Has she earned all that attention? Put another way, what happens when a specific wild animal becomes an icon for a whole species? What will happen when 399 dies?

It will likely depend on the manner of her death.

The same year the bear with her own bumper sticker was getting in repeated trouble in Wyoming, a similar sow with a long history of quiet co-existence with humans around Polebridge, Montana, was killed along with her three cubs for repeatedly pillaging human food. Another grizzly with no known conflict record died on the edge of Salmon Lake north of Missoula after getting hit by a car. And yet another recordless grizzly died by government gunshot after mauling a camper to death in the town of Ovando.

The challenge for most parties when trying to manage grizzlies is the rules will run into all kinds of bears, revered and reviled. As the wildlife managers of Montana, Wyoming and Idaho increase their calls for local control while the federal government appears poised to continue the grizzly’s Endangered Species Act protection, finding some agreeable ground to share appears elusive.

Members of all three states’ congressional delegations have joined bills to return grizzlies to local management. Wyoming Sen. Cynthia Lummis moved first to reinstate the Fish and Wildlife Service’s 2017 delisting rule “without regard to any other provision of law that applies to the issuance of that final rule,” adding that the new rule “shall not be subject to judicial review.” Idaho senators Jim Risch and Mike Crapo, Montana Sen. Steve Daines and Wyoming Sen. John Barrasso co-sponsored the S. 973 Grizzly Bear State Management Act of 2021, which has been referred to the Senate Environment and Public Works Committee, but hasn’t had a hearing.

That had little effect on the Montana Legislature, which passed several laws impeding Montana Department of Fish, Wildlife & Parks ability to cooperate with federal agencies and encouraging controversial wolf-killing methods in grizzly-occupied country. The Congress members renewed their delisting demands in November.

And the wildlife management commissions of all three states have signed a memorandum of agreement describing how they will share hunting opportunities on grizzlies in the Greater Yellowstone Ecosystem.

First, local predator control campaigns run into that federal requirement that state oversight won’t result in the species population sliding back into endangered status. Research suggests that could happen after two or three overly successful hunting seasons. Similar efforts to expand wolf hunting and trapping in wolf states have resulted in federal lawsuits calling for the restoration of ESA protection and the removal of local control.

Second, while people see maps lined with state boundaries, national parks, federal forests and other jurisdictions, grizzly bears only see landscape. While many people presume the bears’ ESA status applies only within their recovery areas such as the Greater Yellowstone or Northern Continental Divide ecosystems, the law actually covers grizzlies throughout the Lower 48 States.

That matters because the two delisting attempts for the Greater Yellowstone grizzlies collapsed in court partly because of scientific difficulty of explaining how changes to one bear population might impact another. For example, if the NCDE grizzlies were turned over to Montana state control and a hunting season reemerged, how could a hunter tell if a bear in the rifle scope wasn’t visiting from the still-ESA-protected Cabinet-Yaak Ecosystem population?

“Bears are expanding in all directions, including the Bitterroot,” Montana Fish, Wildlife & Parks Wildlife Manager Ken McDonald told the Interagency Grizzly Bear Committee in December. “Hopefully when the bears do get there, we’ won’t be starting from scratch.”

The grizzly incidents have been coming in fast. There was the grizzly yearling caught in a coyote trap near Lincoln in September. The female grizzly captured after getting into horse feed near Ovando, close to the July mauling site. The later bear was relocated to the Reservation Divide north of the Rattlesnake Wilderness Area for her own safety.

“Eventually we’ll have grizzlies just like they do in Kalispell,” said Missoula-based FWP bear manager Jamie Jonkel. “That time has finally arrived. We had verified grizzlies in late August in the Big Hole, along Miner creek and good reports of tracks in the Sula area.”

At least three bow hunters lost elk carcasses to grizzlies in the Seeley-Swan vicinity, and bears ransacked hunting camps there and in the Flint Creek area near Anaconda. One bear peeled open a garage door to get at a hanging carcass. Another recovered one from the excavation bucket of a tractor by Lake Inez.

On the Rocky Mountain Front, FWP bear manager Chad White ran nine grizzly bears out of a single shelterbelt of trees. The cover was 15 yards wide and 120 yards long, planted along nine grain bins. White said the usually solitary grizzlies appeared to be sharing space like their Kodiak brethren do along Alaskan salmon streams.

None of these grizzly bears have coffee-table books dedicated to them as 399 does.

The fact that 399 has an international following is a reminder that grizzly bears have an international habitat. The Rocky Mountains aren’t the only place with grizzly trouble, or solutions.

Gregg Losinski spent his career working for Idaho Fish and Game, with a side gig as the communications manager for the Interagency Grizzly Bear Committee. That helped him explore brown bear management in many other parts of the world, including Japan, Slovakia and Norway.

Losinski said Japan’s northern island of Hokkaido reminded him a lot of the Intermountain West, with similar peaks, agriculture and indigenous tribes with deep spiritual connection to brown bears.

“They have been able to head off a lot of problems,” Losinski said. “But the cultural aspect for how they view wildlife is more inclusive than western thought. They’re more willing to accept wildlife and work with it and deal with it, rather than do away with it.”

Part of that may reflect the Japanese attitude toward regulation, which Losinski said was more accepting compared to the American tendency to oppose rules just because they’re rules. The result is that heavily used recreation areas limit activity when bears are out, and ramp up skiing and backcountry use when they hibernate. Trails have lots of bear-aware information, and even supplies of bell-covered walking sticks for people to take into the woods.

In contrast, Losinski said places like Slovakia have a long history of bears and other big game belonging to royalty, so common people have adapted to living with them.

“They have huge sheep herds, and they’re staffed 24-7,” Losinski said. “I talked to herders, and they’d say ‘Of course you Americans have problems – you just dump your cattle on the landscape and come back months later. The Slovakians have almost no livestock related issues.'”

They do have garbage problems, however. Bear hunting has traditionally been handled by private or government-connected hunting clubs, which use bait to attract brown bears to sniper posts.

“In Slovakia, trying to keep garbage and other things secure is a total uphill battle,” Losinski said. “Once they get hooked on garbage, they’re coming in right behind hotels. Then you have people in hotels screaming for something to be done, so they’ve created bear management teams. If bears got into garbage, a local hunt club would invite someone to pay 10,000 euros to shoot the bear off the dumpster.”

The Canadian province of Alberta is almost twice as big as Montana, but holds fewer grizzly bears than the Northern Continental Divide Ecosystem (NCDE). The most recent population surveys by Alberta Environment and Parks Department found between 850 and 950 grizzlies in the whole province. More grizzlies than that roam the Rocky Mountains between Glacier National Park and Missoula.

New grizzly population data for Alberta shows some isolated bear communities have doubled in size, while others had much fewer bears than expected. Retired Parks Canada superintendent and grizzly biologist Kevin Van Tighem said that’s made it difficult to define “recovery” in a sense of successfully hitting a target.

“We don’t know what it means to be recovered,” Van Tighem said. “Without that, I don’t see how we can take them off the Alberta Wildlife Act as a threatened species.”

On the other side of the equation stands Alberta’s $8.2 billion (Canadian dollar) tourism industry, which has found grizzlies to be a major attraction. The province’s First Nations have also made it known they expect to be consulted before any extensive hunting policy goes into place.

Tourists coming to see 399 and her fellow charismatic megafauna in Grand Teton,  Yellowstone and Glacier national parks bring even larger sums to the Rocky Mountain West economy. And the region’s sovereign Indian Tribes have informed both the Interagency Grizzly Bear Committee and the federal courts they expect to have their say on any grizzly management plans – especially if a trophy hunt threatens their cultural and traditional prerogatives.

Chris Servheen oversaw grizzly recovery for the IGBC for 35 years before retiring and joining the Montana Wildlife Federation. In that time, he saw grizzly populations grow from around 600 when they were placed under Endangered Species Act protection, to more than 2,000 today.

He’s also seen grizzlies go from nearly invisible radio-collar beeps in wilderness to traffic-jam roadside attractions. How we react to specific animals like 399 can leave deep marks on the future of grizzlies in general, he says.

“She’s been magically transformed from a grizzly bear to a symbolic animal,” Servheen said of 399. “She can get close to human-use areas and nothing bad happens. We’ve corrupted her behavior. All these photographers have changed her and corrupted her natural behavior. They think it’s non-consumptive to take pictures. In fact, it’s extremely consumptive.” 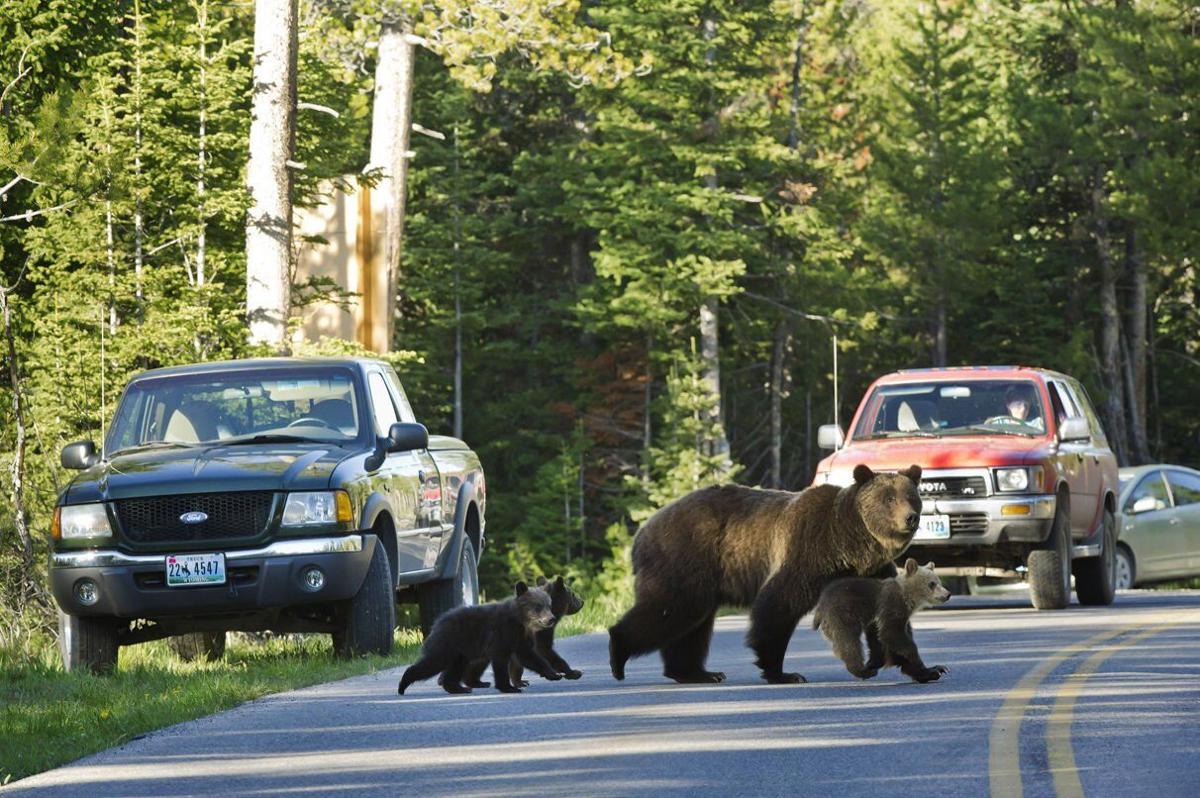 In this June 2011 file photo, grizzly bear No. 399 crosses a road in Grand Teton National Park, Wyo., with her three cubs. U.S. officials said Friday that they will not restore federal protections for Yellowstone-area grizzly bears despite a court ruling that called into question the government's rationale for placing the animals under state management. 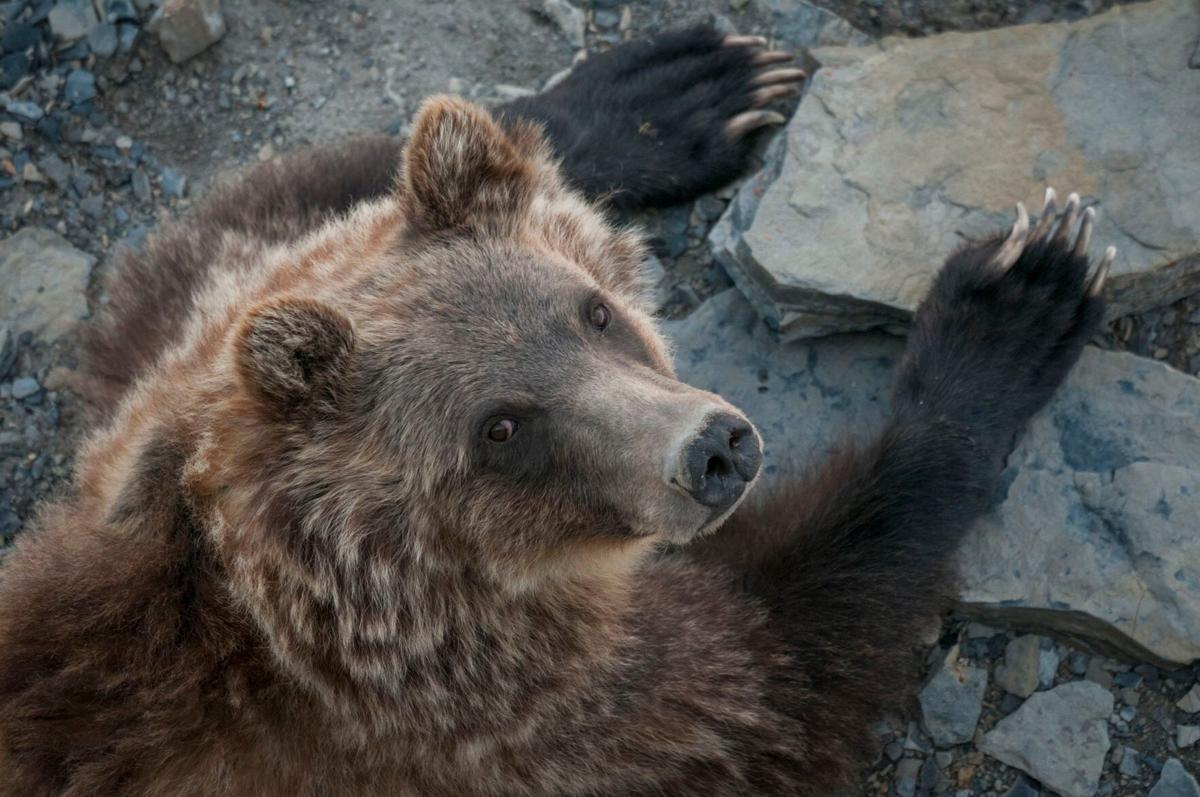 Wilderness Photographer Steven Gnam was looking over a cliff in the mountains of Montana when he spotted a grizzly lying on the ground directly below him. The bear eventually laid its head down and went to sleep. 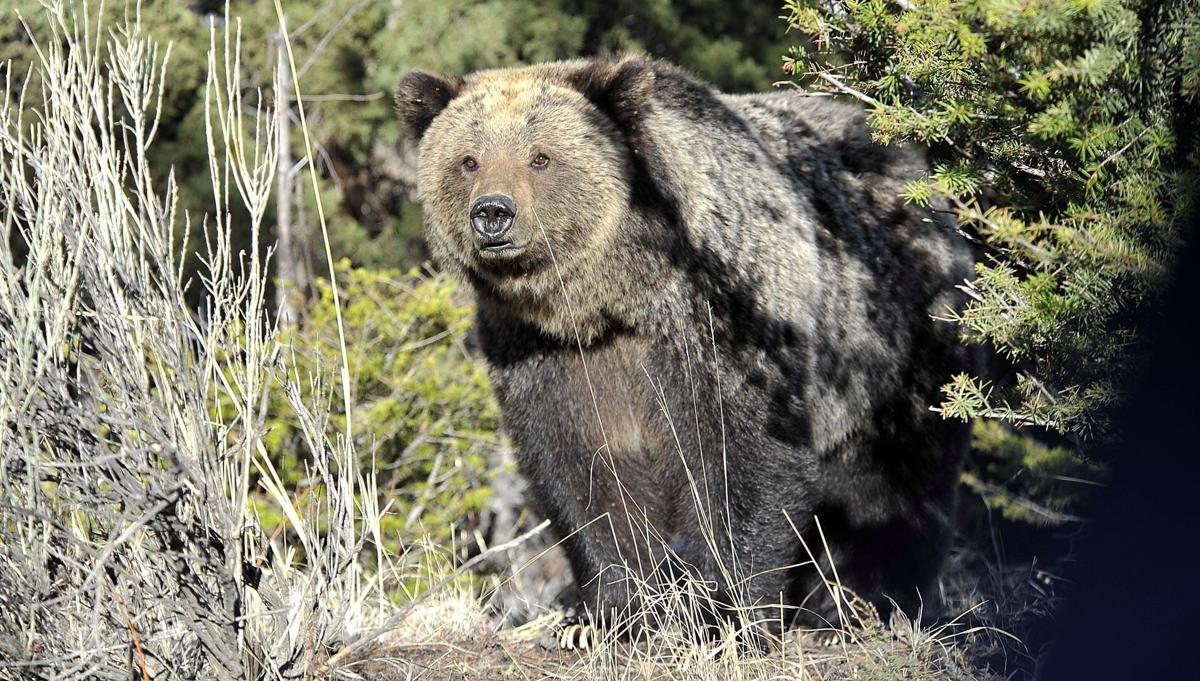