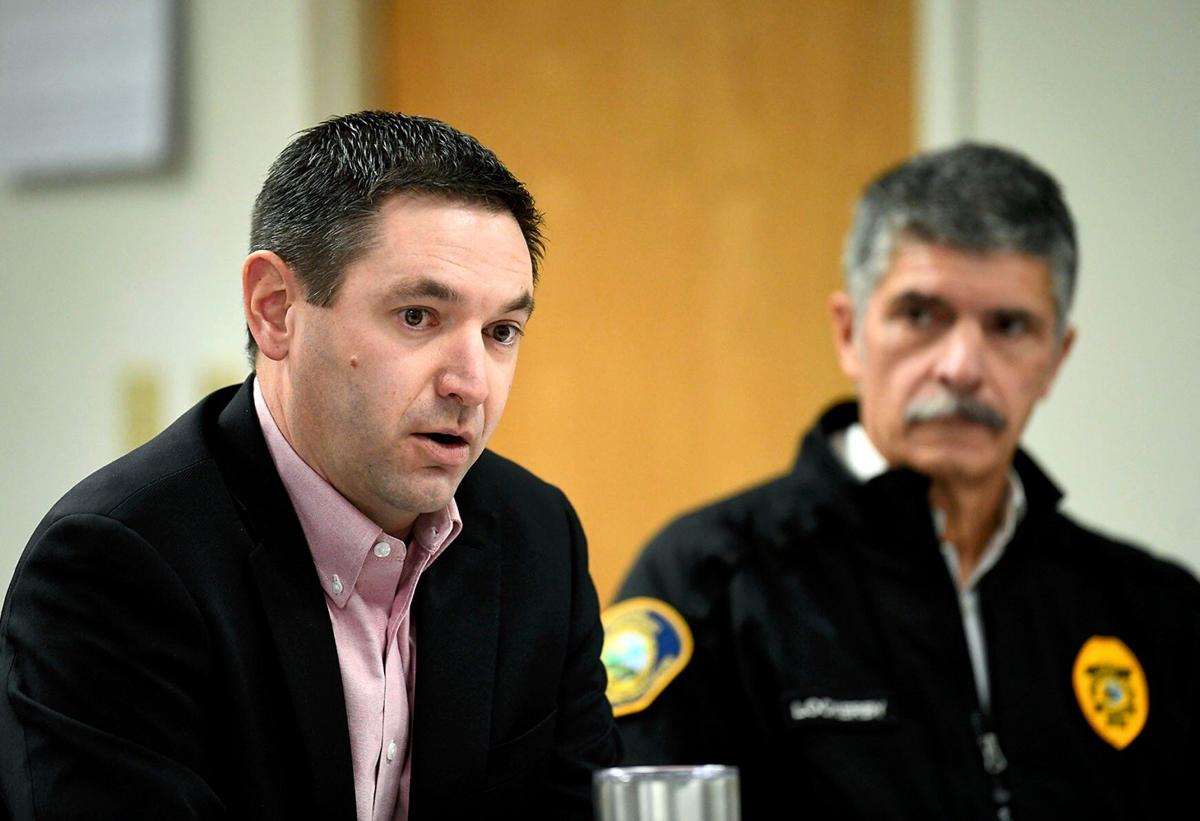 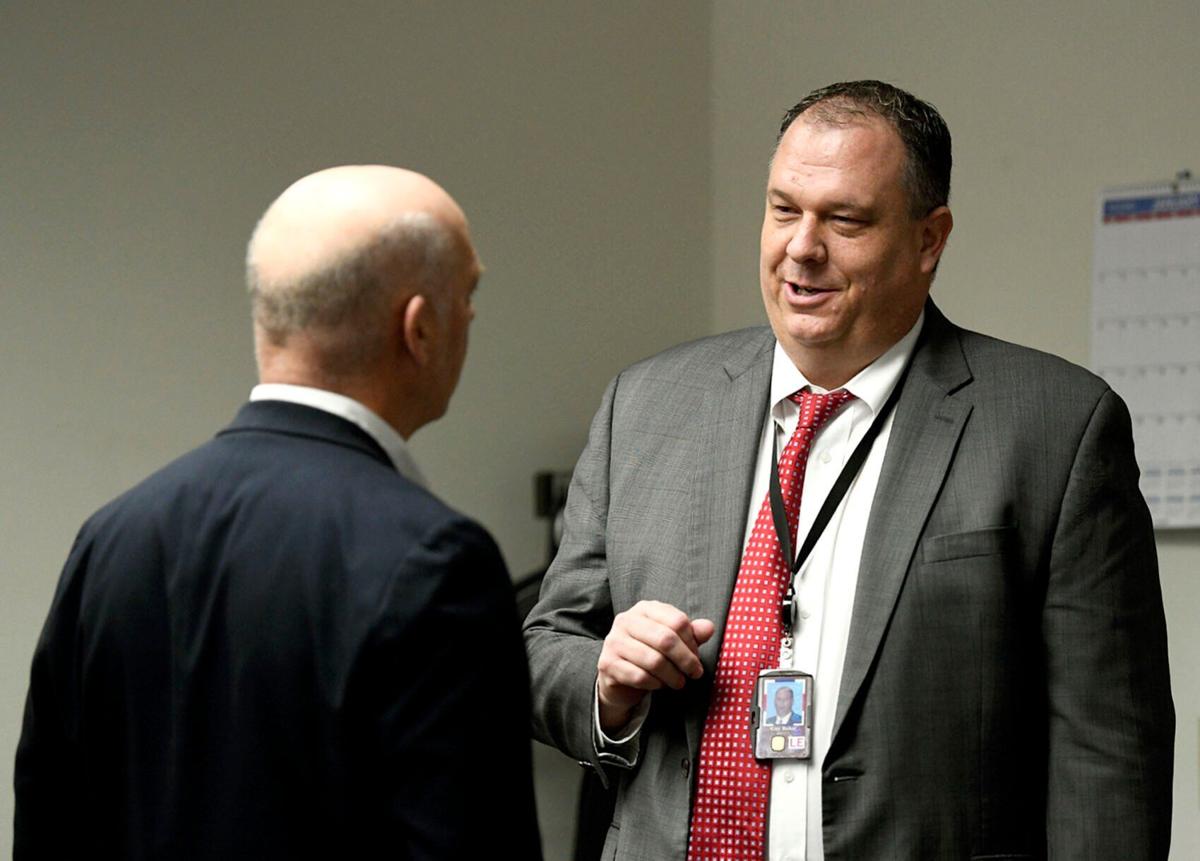 Missoula Police Detective Guy Baker, who has held about 3,000 training sessions on human trafficking around the state, talks with Montana Gov. Greg Gianforte, left, after the meeting on Tuesday. 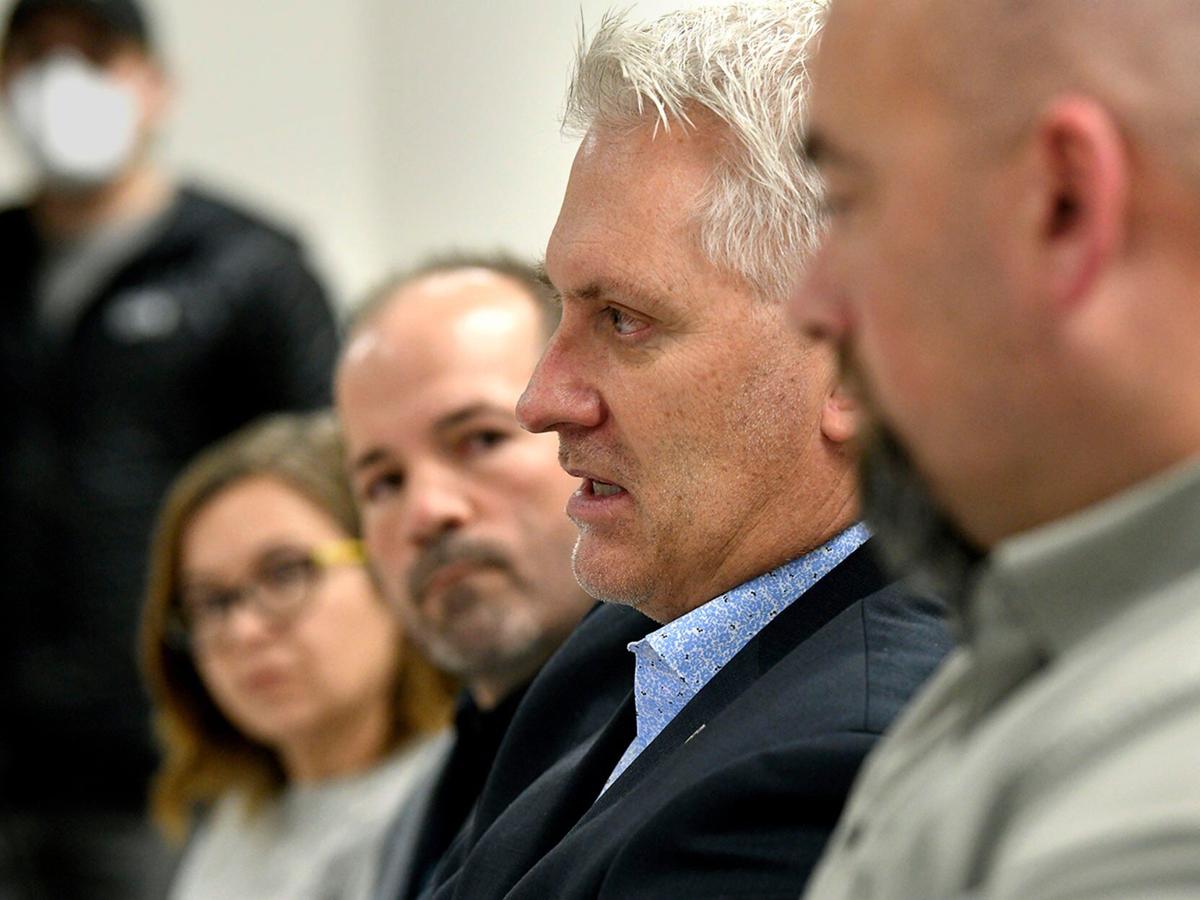 Lowell Hochhalter, second from right, talks about work done by the Lifeguard Group, which started the Montana Human Trafficking Hotline, at the meeting on Tuesday.

In the last year, the state’s Division of Criminal Investigations department has seen a 65% uptick in human trafficking investigations — 41 were investigated in 2020, with a jump to 68 in 2021. This does not include what’s going on at local levels, Knudsen said.

“Human trafficking involves the use of force, fraud, or coercion to obtain some type of labor or commercial sex act,” according to the Department of Homeland Security. A commercial sex act is the giving or receiving of anything of value (money, drugs, shelter, food, clothes, rent payment, etc.) to a person in exchange for a sex act, the Montana Department of Justice website says.

“Those numbers are up from seven cases in 2015, just to put this in perspective,” Knudsen said. “We’re facing a really growing problem here.”

“Addressing this issue is going to take all of us,” Gianforte said. He asked participants to detail what is and isn’t working in the state’s response to combating human trafficking.

Many pointed to collaborative efforts across community agencies as being an effective tool for combating trafficking, along with raising awareness in public spaces, like middle and high schools, alongside more extensive training for law enforcement and criminal justice personnel.

“We believe it should be one team, one mission,” Missoula Police Chief Jaeson White said. Missoula averages about 10 human trafficking investigations a year.

Missoula Police Detective Guy Baker has been leading the way for training officials on human trafficking in Montana. He's been doing immersive sessions since 2014, and about 3,000 law enforcement and criminal justice personnel have been trained so far.

Billings is home to the highest rates of trafficking activity in the state, Baker said in an interview. He attributes this to the large number of massage parlors, which can be hubs for trafficking. Bozeman and Missoula fall second and third behind Billings for trafficking rates.

“It’s still not enough. We could have 10 more and we’d still be just as busy as we are today,” he said.

Lockerby attributed a recent increase in awareness and strengthened response to trafficking to the efforts of the work of community organizers, better prosecution and legislative policy and more public support.

“All of this grassroots effort is having a significant impact,” he said. “I think our ultimate goal is that Montana is a bad place for human traffickers; don’t do that here.”

He also noted the pandemic has contributed to an uptick in human trafficking cases, with minors having more access to online sites where predators lurk.

The Montana Human Trafficking Hotline, started by the Lifeguard Group and run by volunteers across the state, has also bolstered the state’s response to the crisis. It was launched in 2020.

For example, a truck driver who had been through the training was at a stop at the Wye when two 13-year-olds knocked on his door and solicited sex. He immediately called 911, but by the time officers arrived the girls had gone. This was on a Thursday. The next Tuesday, a tip came in through the hotline about two girls at the Wye knocking on truckers' doors. It was the same case, Lifeguard Group President Lowell Hochhalter said.

The hotline has better allowed timely responses from law enforcement, and volunteers have seen more legitimate calls than they were expecting, he explained.

"If it's a victim calling, we know who to call for that victim to get an immediate response," he said.

Shantelle Gaynor, director of the Missoula County Community Justice Department, pointed to “true prevention” tactics to fight trafficking going forward — namely reducing an individual’s vulnerability to being trafficked, which can mean ensuring they have stable housing and that there’s prevention work being done at schools.

There’s also a need for specialized services for survivors who have experienced trafficking, Gaynor added.

“I think we have real opportunities in the state to meet those needs, and with our public-private partnerships we can really build on those strengths,” Gaynor said.

If you or anyone you know is a victim of human trafficking, call the Montana Human Trafficking Hotline at 833-406-STOP or your local law enforcement agency.

A homicide investigation is underway after two men were found dead in Three Forks early Saturday morning, according to the Gallatin County Sheriff’s Office.

Black bears used to cause havoc in Virginia City, but efforts to neutralize attractants changed that. Now, residents hope those efforts have prepared them for their next likely visitors - grizzlies.

"It's been a travesty that we have lost that many long-term employees," state Sen. Mark Sweeney said of shortages in staffing at the state mental hospital.

In early December, the superintendents penned a letter to state Superintendent of Public Instruction Elsie Arntzen to express their disappointment with her leadership.

Missoula Police Detective Guy Baker, who has held about 3,000 training sessions on human trafficking around the state, talks with Montana Gov. Greg Gianforte, left, after the meeting on Tuesday.

Lowell Hochhalter, second from right, talks about work done by the Lifeguard Group, which started the Montana Human Trafficking Hotline, at the meeting on Tuesday.