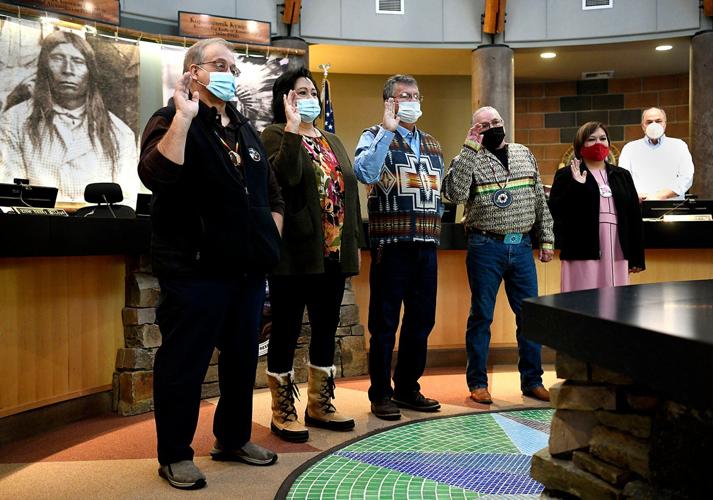 Tom McDonald, Carole Lankford, Leonard Twoteeth, Jim Malatare and Jennifer Finley, from left, are sworn in as members of the Confederated Salish and Kootenai Tribes' Tribal Council on Friday in Pablo. 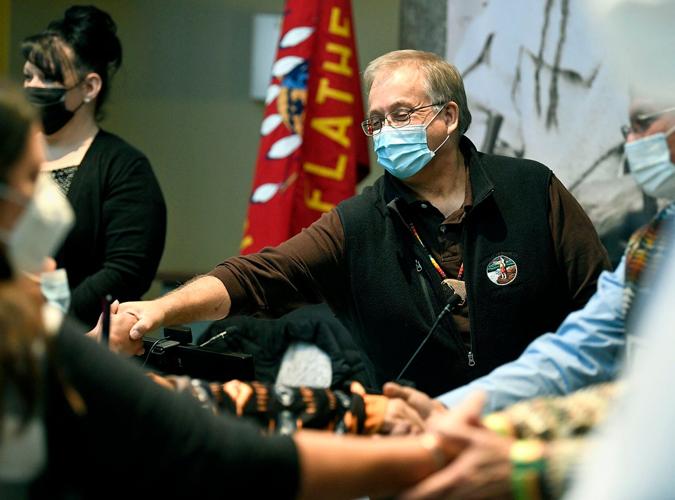 Tom McDonald, the new CSKT Tribal Council chair, and other council members greet those attending the swearing-in ceremony at council chambers in Pablo on Friday.

PABLO — The Confederated Salish and Kootenai Tribes officially swore in five members to its Tribal Council on Friday during a quarterly meeting.

Malatare previously represented the district on council prior to Fyant’s two terms. There are 10 Tribal Council positions and terms are for four years each. The remaining five seats will be elected next year.

McDonald is the new council chair after unanimous vote from council, with Twoteeth serving as vice chair. Ellie Bundy (St. Ignatius) is treasurer and the representative for Pablo, and Martin Charlo is now the secretary. Charlo was previously the council’s treasurer.

McDonald formerly was the Fish and Wildlife and Recreation Division manager in CSKT’s Natural Resources Department.

“It's a huge honor and a huge privilege to have the other colleagues select me and want me to help facilitate and move forward with all of our initiatives and actions and service to our membership and service to the environment," McDonald said to the Missoulian.

"It's humbling ... I didn't run to be an officer, (but) if that's what the rest of my colleagues want, that's part of my service to the membership."

The tribal election was held Dec. 18 and certified on Dec. 22. Friday’s meeting was the first quarterly gathring held with the public present in nearly two years.

Each member of council was also given the chance to present their own quarterly update. Numerous topics were brought up by the 10 representatives, including the continuing pandemic, education, missing and murdered Indigenous people, the CSKT water compact and the climate.

Several representatives emphasized unity and coming together on Friday.

"When we help each other and encourage each other we're capable of achieving great things that none of us can do alone. We need each other. We're a small tribe and there aren't very many left of us in the world," Finley said. "We come from beautiful, strong people who survived the darkest times by standing together.

Former tribal attorney Rhonda Swaney was honored on Friday as well, with tributes to her long and dedicated service to the Tribes highlighted several times by council members. She retired in December and had been a legal representative for the tribe since 2005. She began heading up the department in 2014.

In 1994, she was elected to Tribal Council and eventually became the tribe's first female chairperson. Swaney also worked for the Bureau of Indian Affairs and was deeply involved with tribal water rights.

She was one of the leaders who pushed for the water compact. The compact will give the Tribe $90 million annually for the next 10 years to rebuild the Flathead Irrigation project and also transferred ownership of the National Bison Range to them.

“I had the opportunity during my career to work on so many interesting and important things and I just want to say thank you for that opportunity," Swaney said to council via Zoom. "And I want to thank all those who worked with me, all the teams that I was on were all very talented tribal members and non-member employees because we did this. We put the CSKT on the map again and I certainly didn't do it myself."

Jordan Hansen covers news and local government for the Missoulian. Shout at him on Twitter @jordyhansen or send him an email at Jordan.Hansen@Missoulian.com

Over the last two years, dilapidated trailers throughout the park were replaced with 44 new modular homes, and employees are now moving in for the 2022 season.

Montana grizzly bear managers convene on Thursday to assess how many bears roam the Northern Rocky Mountains and how they’re affecting human neighbors.

Communities in the newly drawn western U.S. House district include some of the hardest-hit when it comes to affordable housing.

The victim's family started a GoFundMe to raise money for her funeral: https://www.gofundme.com/f/the-family-of-rozlyn-bluemel

The candidates are Cora Neumann, Monica Trane and Tom Winter.

US to fly in baby formula on military contracted jets

Tom McDonald, Carole Lankford, Leonard Twoteeth, Jim Malatare and Jennifer Finley, from left, are sworn in as members of the Confederated Salish and Kootenai Tribes' Tribal Council on Friday in Pablo.

Tom McDonald, the new CSKT Tribal Council chair, and other council members greet those attending the swearing-in ceremony at council chambers in Pablo on Friday.