Rams vs. Buccaneers: Updates and scores from the NFL playoffs

BILLINGS — It's an oft-used movie cliche that a character arriving in a small foreign town becomes surrounded by a welcome party of young, curious locals.

That's what Andy Austin was thinking as he rode a bicycle through Feynan, Jordan, with some colleagues.

"Some iconic, cheesy movie situation. And you're sitting there thinking, 'This never happens,'" Austin said. "All of a sudden, you have this sea of kids appear out of nowhere, and they're just running with the bikes."

Austin returned last week after a month in the Middle Eastern country, where he helped to unload a shipping container full of bikes. The endeavor came together through a collaboration of American and Jordanian organizations, including a Billings business and its nonprofit extension.

Some bikes will serve as rentals to add to a local push for tourism. Others were donated to the locals who need transportation.

“It is amazing what a difference a bike can make," said Dan Austin, who started an organization called Wheels of Change through his Billings travel company. "When you're looking at the need to walk 5 or 10 kilometers to school, it’s easy for kids to just quit going.”

Dan Austin, who is Andy's father, started Wheels of Change in 2010 as a vehicle to donate an old fleet of bicycles at his business, Austin Adventures. The organization has since sent hundreds of bikes to foreign countries, mostly in Africa.

The Jordan project began during a meeting that included Dan Austin, A&K Philanthropy, a Jordan trail association and a representative from the Jordan Tourism Board.

A number of donors contributed, and in late April a shipping container of 260 mountain bikes left Billings for the village of Feynan, Jordan.

Andy Austin, along with colleagues, went to meet the container, set up the bikes and train some locals for tourism rentals and bike maintenance. About 160 bikes stayed in Feynan; the other 100 went north to the town of Um Quais, a deeply historical area near the Israeli and Syrian borders.

They worked closely with the Jordan Board of Tourism and Baraka, a consulting firm based in Amman that says it focuses on sustainable tourism projects.

Andy Austin said it was tough to leave the vast, high-desert expanse of Um Quais. Though Jordan's proximity to Syria has made it host to roughly 660,000 refugees and tourism can be difficult in a northern area like Um Quais, he said that he didn't feel the conflict was immediate during his visit.

Tonight we cycled through two-thousand year Greek/Roman ruins in Umm Qais as part of the bike project we're working on in Northern Jordan.
… pic.twitter.com/MILiDAOljG

“There’s some beautiful ruins in Um Quais," he said. "They're trying to develop it for tourism. It’s the start of the Jordan Trail.”

The 403-mile Jordan Trail spans much of Jordan and ends at the Red Sea.

A&K Philanthropy prepared a second shipping container full of bikes that is expected to reach Jordan by the end of this month, according to a press release for the collaboration. The containers will remain on scene and be retrofitted into bike shops and rental hubs for small tours.

It's easy to give away all of the bikes, Dan Austin said. But they opted to keep a portion of them for a rental business, run by locals, in hopes of fostering a more long-term economic effect.

"We found that if we're not careful, the need is so extensive that we can burn through a container full of bikes in a matter of weeks," he said.

Andy Austin, who is a photographer in addition to his work at his father's company, documented his trip. And he used one bicycle to narrate it.

That bicycle started in Livingston — a Schwinn mountain bike that a woman owned for years before donating. It went in the shipping container alongside the others.

It ended up going to a 24-year-old woman in Um Quais who previously had no transportation. In a brief video produced by Andy Austin, she summarizes the gift as a gained freedom.

After seven years and various bicycle projects, Dan Austin said that it's the freedom that's been the most effective change.

"We take mobility for granted," he said. "And I think that's the biggest learning curve for us." 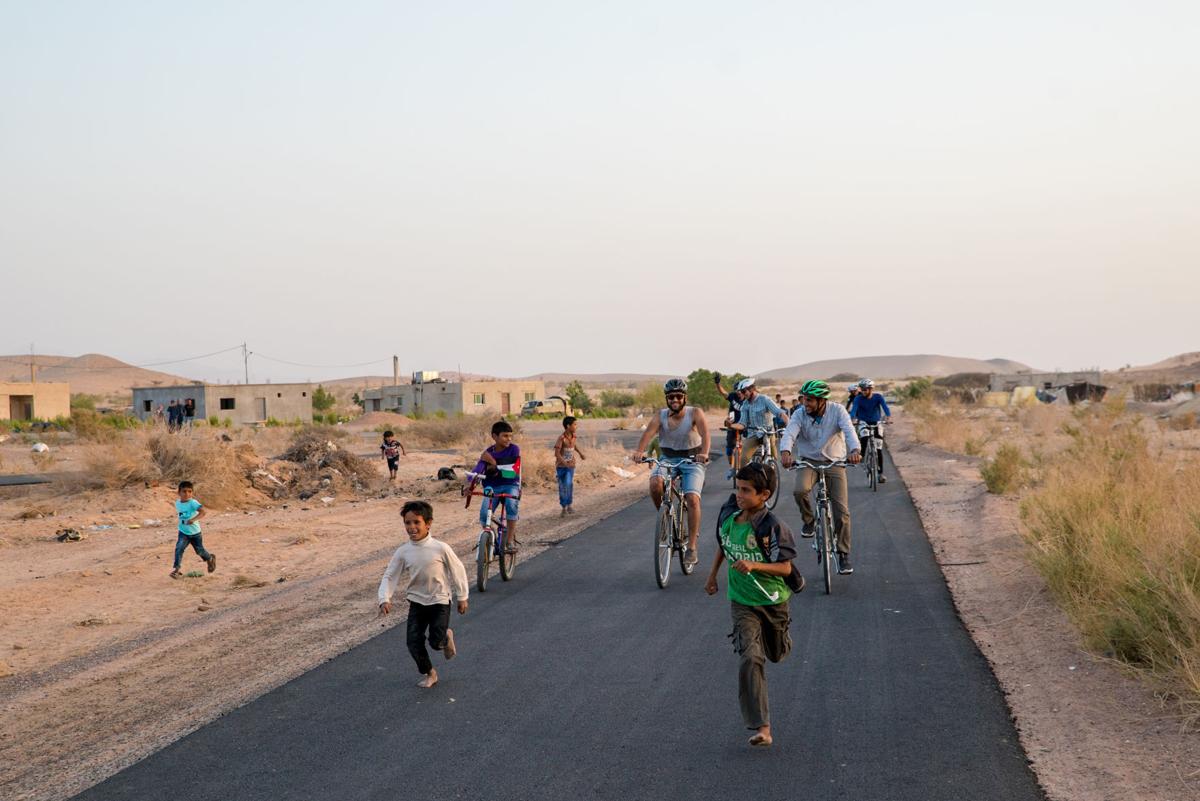 Locals run with a group of cyclists in Jordan. 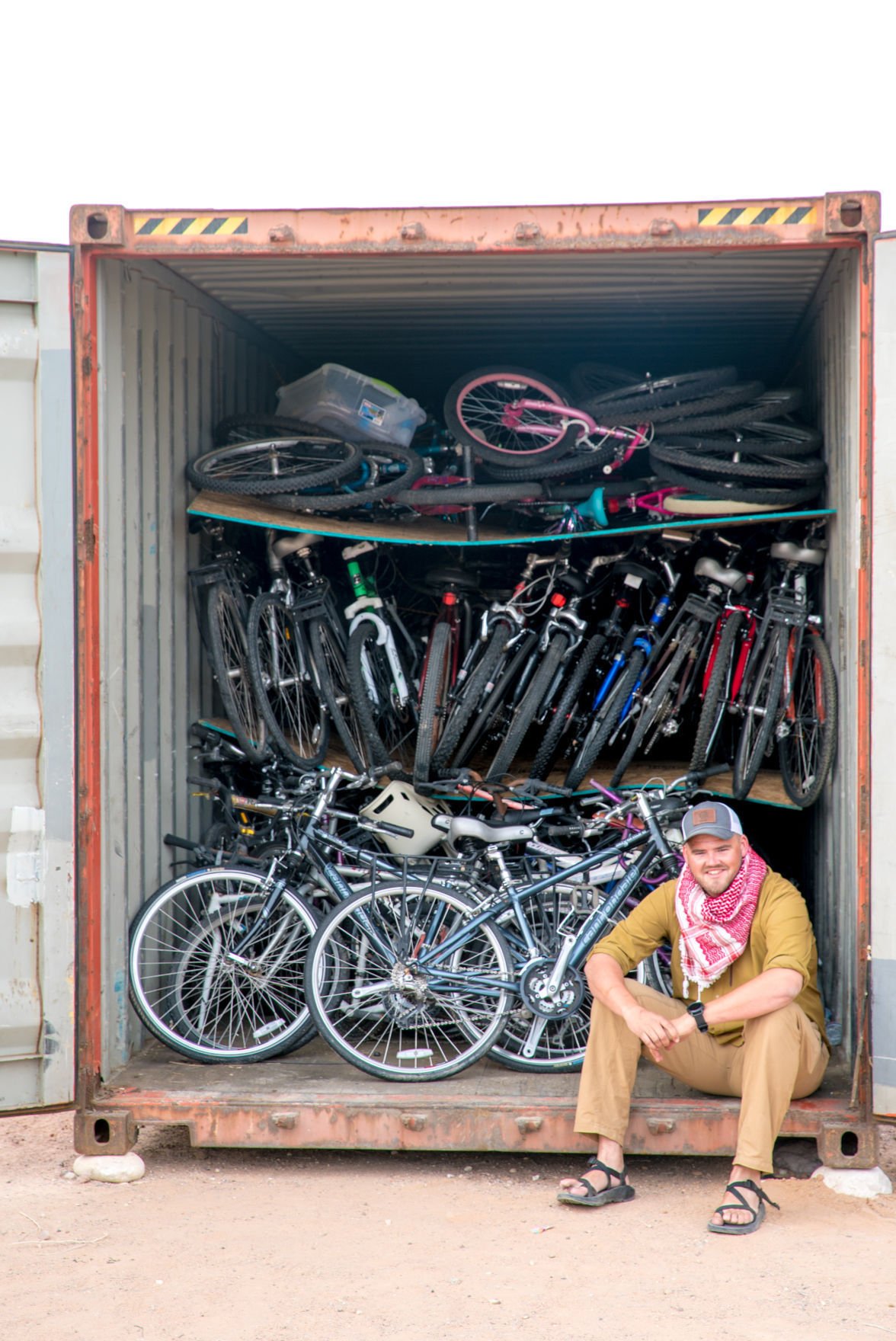 Andy Austin poses with a shipping container of bicycles that arrived in Jordan.