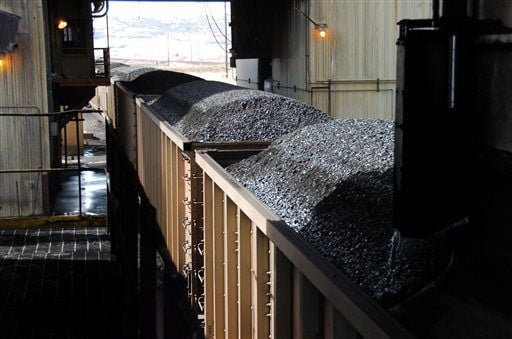 Coal is loaded onto hopper cars at the Spring Creek Mine near Decker, Mont. 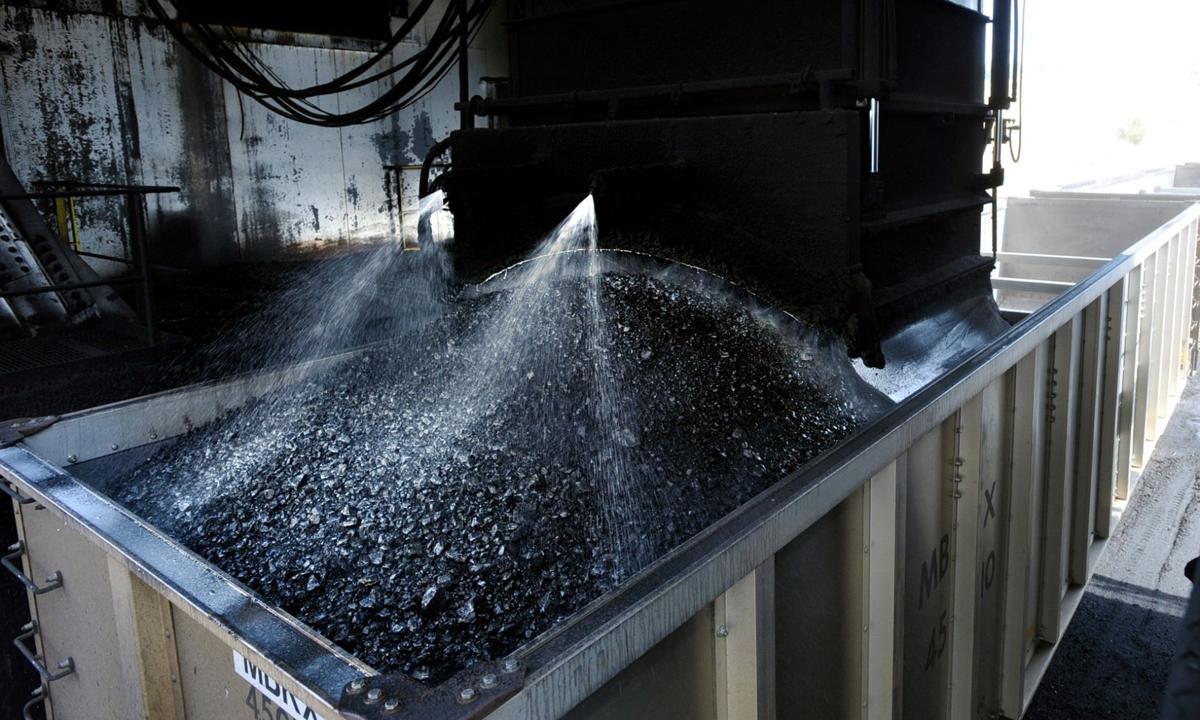 Railroad cars are filled with coal at the Spring Creek Mine. The cars hold 120 tons of coal and are loaded in six to eight seconds, then sprayed with water and a binding chemical to reduce dust during their shipment period.

A BNSF train with 125 cars loaded at the Spring Creek mine in southeastern Montana for a run through Washington state to British Columbia. The coal will be shipped to power plants in Asia.

Montana coal production is more than 2 million tons ahead of where it was at this time last year, although analysts say the future is far from bright for the fossil fuel.

Most of the increased production comes from Spring Creek, a Cloud Peak Energy mine in southeast Montana. The Montana Coal Council compiles the production numbers.

“Certainly what we’ve seen is an increase in our sales to our Asia customers primarily in South Korea and Japan,” said Rick Curtsinger, Cloud Peak Energy spokesman. “Last year, by the end of the second quarter, we had shipped 200,000 tons of coal to our Asia customers. This year as of June 30, we shipped 1.8 million tons to customers in South Korea and Japan.”

Coal production is running away from a historically bad 2016 — the nation’s lowest coal production year since 1978. But the first seven months of 2017 still trails 2015 production by about 6 million tons. Montana mines produced 20.7 million tons through June two years ago.

Montana mines produced 3.36 million tons of coal in July. Almost half of the production increase came from Spring Creek Mine, said Bud Clinch, Montana Coal Council director. Nearby Decker Mine, owned by Lighthouse Resources, was the second-largest contributor. Decker production was up 155,000 tons.

“I think both Decker and Cloud Peak are because of export markets. They both have capacity at Westshore Terminal and demand is stronger,” Clinch said.

Westshore Terminal is a British Columbia coal port off the shore of Vancouver. It’s where most of Montana’s export coal is shipped.

In late 2015, with prices driven down by a glut of coal in the Asia Pacific market, Montana mines suspended exports entirely. Cloud Peak agreed to pay Westshore to reserve space, rather than ship coal at prices that wouldn’t cover the cost of delivery.

Those sluggish prices suppressed coal exports into 2016, when production was in a downward spiral until late in the year when supply tightened again and the market improved. In 2017, the growth has been steady.

“We’ve been up every month for the last five months,” Clinch said.

The only way for coal production to go from 2016 was up, said Tom Sanzillo, analyst for Institute for Energy Economics and Financial Analysis. Last year was a bruising one for coal, with cheap natural gas out-competing coal to become the dominant power source in the United States for the first time ever.

The number of coal-fired power plants closed because of age, non-compliance with pollution standards, or both, also increased.

“I think they had a reasonably good half year,” he said. “A company that lost 30 percent of its market in the last couple years and gains back two points is technically doing better.”

But coal prices haven’t really returned to the heyday of 2010 and 2012, when United States mines saw good prices and potential in the Asian Pacific.

Companies have cut costs and found a way to do business with lower coal market prices, Sanzillo said. The Institute for Energy Economics and Financial Analysis favors an energy future with less coal-fired power and more development of cleaner, renewable energy sources.

There’s also no guarantee that South Korea and Japan will use U.S. coal to meet their needs. Just like in 2016, prices could fall and these coal buyers could be shopping elsewhere.

County officials say they haven't received any response from Gov. Gianforte about $143.4 million in federal money that's supposed to help with contact tracing.

Governor Greg Gianforte and Senator Steve Daines are calling for President Biden to stop Afghan resettlements to Montana after a refugee from Afghanistan was charged with sexual assault in Missoula earlier this week.

End of an era: Joe’s Pasty closes its doors

Today can only be described as bittersweet.

During the last week, at least 47 more Montanans died from COVID-19, bringing the total to 2,259 deaths since the start of the pandemic.

From her Baltimore dining room, Susan Goodlaxson can see her neighbor gardening across the street. But while other neighbors stop to chat, Goodlaxson just watches from the window. She uses a wheelchair, and there isn’t a single curb ramp on her block.

The 7-0 opinion found law enforcement's seizure of the Vietnamese man "unconstitutional," and reversed his conviction, which led to a 15-year state prison sentence in 2019.

Coal is loaded onto hopper cars at the Spring Creek Mine near Decker, Mont.

Railroad cars are filled with coal at the Spring Creek Mine. The cars hold 120 tons of coal and are loaded in six to eight seconds, then sprayed with water and a binding chemical to reduce dust during their shipment period.

A BNSF train with 125 cars loaded at the Spring Creek mine in southeastern Montana for a run through Washington state to British Columbia. The coal will be shipped to power plants in Asia.