Several environmental groups are asking a federal judge to halt a plan approved by the U.S. Forest Service allowing state biologists to kill non-native rainbow trout in the Scapegoat Wilderness and replace them with native westslope cutthroat trout.

Groups including Wilderness Watch, Alliance for the Wild Rockies and Friends of the Wild Swan filed for a preliminary injunction late last week challenging the Forest Service’s approval of Montana Fish, Wildlife & Parks’ North Fork Blackfoot Westslope Cutthroat Trout Project. The groups allege approval to use helicopters and motorized boats to apply rotenone and potassium permanganate in lakes and streams to kill fish violates the Wilderness Act and that the federal agency failed to properly consider environmental impacts as required by the National Environmental Policy Act. 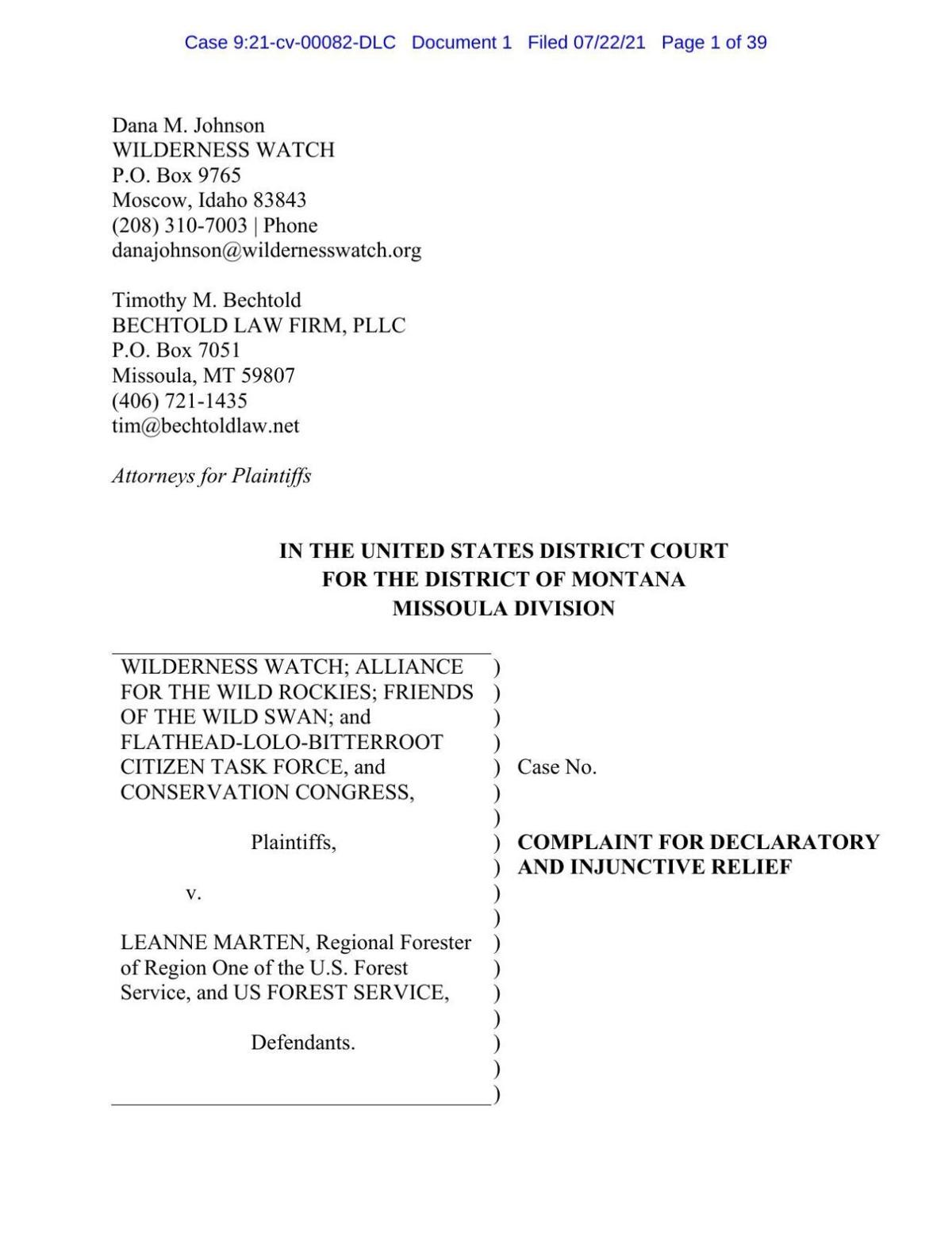 The Forest Service earlier this month approved FWP’s plan to poison fish in three lakes and 67 miles of the North Fork of the Blackfoot River and its tributaries in wilderness located north of Ovando and Lincoln. This first phase of the project is slated to begin next month and included landing helicopters within the wilderness boundary to transport equipment including a motorboat and electric generator. Deliveries would involve two flights a day for about seven days between Aug. 1 and Sept. 15 during the first year.

Stocking genetically pure westslope cutthroat trout, a fish native to Montana as opposed to rainbow trout or “cutbow” hybrids, would be sourced from hatcheries and reintroduced for up to six years. FWP Regional Supervisor Randy Arnold previously told the Missoulian the project is a top priority for state fisheries managers as the strong hybrid population is an “outlier in an otherwise native trout stronghold.”

The court filing takes aim at several aspects of the project as well as the Forest Service’s decision to use a categorical exclusion to exempt it from further environmental analysis. Agencies may exclude certain actions not expected to have a major environmental impact, with the categorical exclusion applied in this case allowing wildlife habitat improvements that do not include herbicides.

The use of poisons, helicopters and other motorized equipment may violate the Wilderness Act by negatively impacting the primitive character of the area, the groups allege. Specifically, the decision violates a mandate in the act that should motorized equipment be authorized, it be done so only in order to meet minimum requirements necessary for administration of the area.

George Nickas, executive director of Wilderness Watch, said in an email his organization is generally opposed to stocking fish in wilderness areas, particularly fishless mountain lakes or streams, comparing it to transplanting other species into areas they do not naturally occur.

"In wilderness, nature is supposed to call the shots, we don’t modify it to provide more of something we want," he said. "We accept it on its own terms and let natural processes dictate the presence or absents of species. The alternative is another human-dominated landscape, where we force nature to yield to our demands, rather than showing a little restraint to allow nature to be."

The groups contend the priorities of the Forest Service under the Wilderness Act to maintain the area’s natural processes and the priority of FWP to establish new populations of native fish may not mesh.

The North Fork of the Blackfoot includes a waterfall that acts as a natural barrier to fish migrating upstream. Stocking dating back to the 1920s has established a rainbow trout population above the waterfall while mostly westslope cutthroat occupy the river below.

The groups note that the stretch above the waterfall is believed to have been historically free of fish, but project alternatives did not include a fish-free consideration. They also challenge another aspect of the plan to prevent upstream rainbows from going over the falls and causing further hybridization with cutthroat, pointing out that nothing stops rainbows from coming upstream from the Blackfoot River.

The groups also allege the Forest Service did not sufficiently consider the potential impacts of rotenone on non-target aquatic species or the potential for rotenone to escape containment and kill fish outside the project area.

The groups further contend the Forest Service accepted the plan for westslope cutthroat without considering talk from FWP of one day introducing bull trout above the falls. As bull trout are federally protected, stocking would mean considerable consultation between state and federal authorities before a project could proceed.

Lolo National Forest Supervisor Carolyn Upton wrote in the decision approval the agency had extensively considered the impacts of the project and the public comment.

“The project design will help to minimize the short-term impacts to the public over the course of the project, while bringing both us and FWP closer to our shared conservation goals of the species,” she wrote.

The Missoulian’s Rob Chaney contributed to this story.

Australia lost one-third of its koalas in three years

During a Thursday joint meeting of the state Board of Public Education and Board of Regents, a BPE member called curriculum from the 1619 Project “untrue history.”

The 75 Afghan refugees will be arriving in Montana during the coming months, starting as soon as early October.