Environmental groups are requesting that the Biden Administration strip federal conservation funding from Montana and Idaho over the states’ laws and regulations for wolves.

Twenty-seven groups filed the petition with the U.S. Fish and Wildlife Service requesting that the agency disqualify Montana and Idaho from receiving funding from the Pittman-Robertson Act. The act taps funding from an excise tax on firearms and ammunition, which is then distributed to states for wildlife and other conservation programs. Montana received $21.3 million and Idaho $28.5 million in fiscal year 2022.

The petition contends that laws and regulations passed last year aimed at reducing wolf populations in Montana and Idaho allow unethical methods of take and threaten to drive populations to unviable levels. The laws are necessary, supporters have said, to help bolster elk, deer and moose numbers and reduce livestock depredations. Opponents counter that some of the methods either legalized or encouraged cross ethical lines and drastic reduction of wolf populations is a drive toward extirpation.

The laws run counter to the principles of wildlife management behind the Pittman-Robertson Act, the groups argue.

“Montana and Idaho have relied on anti-wolf rhetoric to pass aggressive laws permitting the widespread slaughter of wolves with zero basis in ethics or science,” said Andrea Zaccardi, carnivore conservation legal director at the Center for Biological Diversity. “These new laws run completely contrary to conservation goals, and they should disqualify both states from receiving federal funding.” 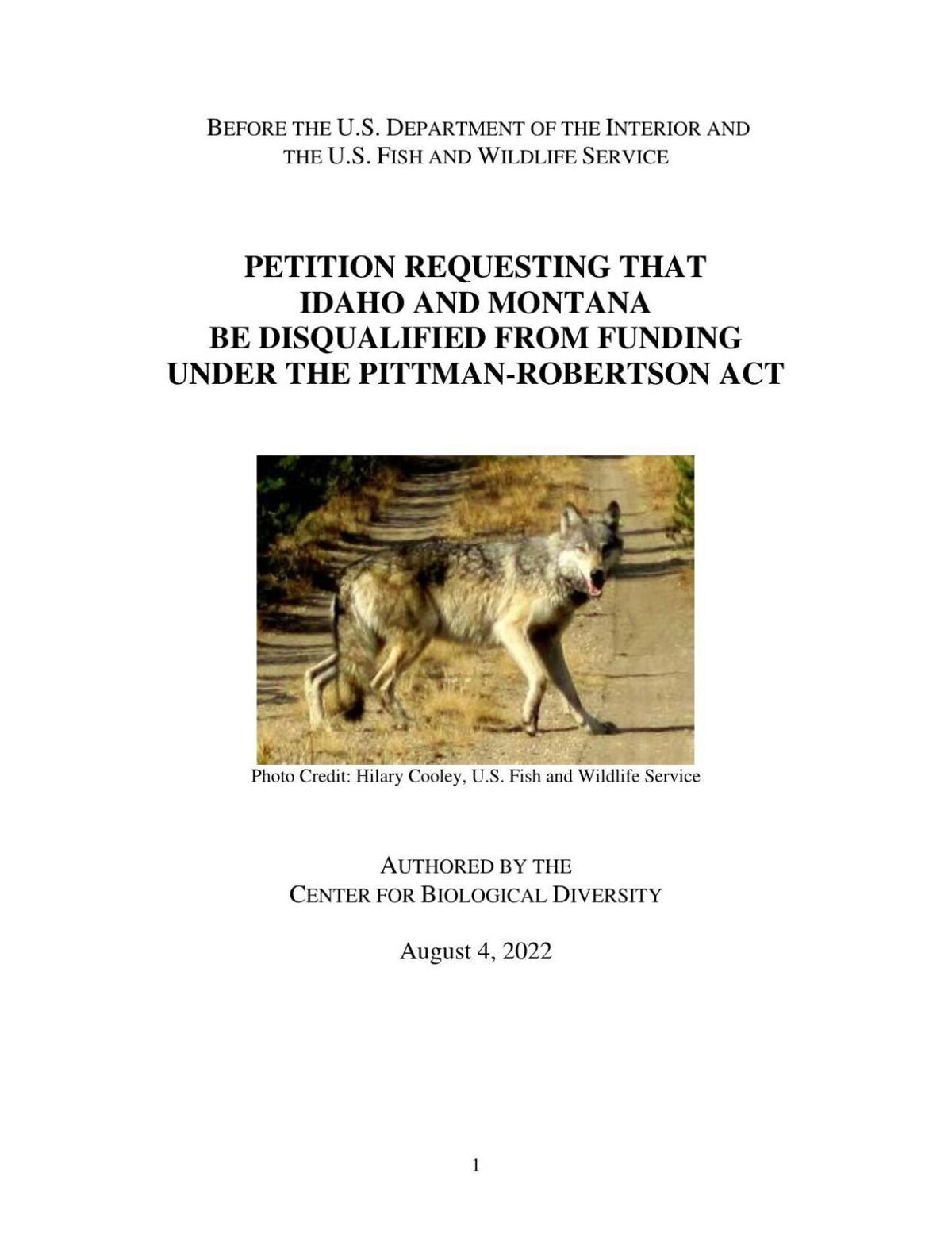 The petition also takes issue with Senate Bill 314, a law directing state officials to “establish by rule hunting and trapping seasons for wolves with the intent to reduce the wolf population in this state to a sustainable level, but not less than the number of wolves necessary to support at least 15 breeding pairs,” the 15 breeding pairs a reference to early recovery goals during delisting from the Endangered Species Act.

The petition incorrectly states SB 314 “recommends” wolves be reduced to legal minimums. The law does not define “sustainable level” beyond a reduction of current numbers, but at or above the minimum threshold. Zaccardi defended the characterization, saying her organization believes the reference to 15 breeding pairs “demonstrates Montana’s intent to dramatically reduce the population to minimum levels required by law.”

“That language cannot be ignored,” she said.

The Montana Fish and Wildlife Commission subsequently adopted regulations raising bag limits on wolves, allowing night hunting on private land and allowing baiting for hunting. The commission also established a regional and statewide “thresholds,” which operated similar to quotas for the last wolf season. Only Region 3 reached its threshold and the commission closed the season there.

FWP said it was reviewing the petition but had no further comment.

A 2021 Idaho law also provides broad methods to kill wolves in the state, including trapping year round on private land and allowing an unlimited number of wolves to be killed on a single tag. The law further strips authority from wildlife officials to responsibly manage the species, the petition states.

“With an expanded hunting and trapping season and liberal killing for depredation management, Idaho is pushing its gray wolf populations to the brink. Such a position clashes with the Pittman-Robertson Act’s purpose and conservation mandates," the petition states.

The petition comes after Montana reported the fewest number of wolves killed by trappers and hunters in the last four years, and both Montana and Idaho report similar wolf population estimates in 2021 compared to past years.

In response to the recent population estimate, FWP Director Hank Worsech said the agency is following the laws passed but the legislature, “and are doing so in a way that provides certainty that wolf populations in Montana will remain off the Endangered Species List.”

Last year in response to a petition, the U.S. Fish and Wildlife Service cited changes in Montana and Idaho’s laws in commencing a 12-month review of the status of wolves in the West to determine if they should be relisted under the Endangered Species Act. The service has not said when the review will be released.

Zaccardi says her organization has concerns about the methodology Montana uses for estimating wolves. Wildlife officials have “failed to respond to questions as to why harvest numbers going down despite expanded seasons and increased methods to take wolves wouldn’t correlate to a drop in the population.”

Officials with Montana Fish, Wildlife & Parks and trappers have said that weather and a later start to the season last December made trapping conditions difficult in northwestern and parts of west-central Montana.

“ ... The way you keep your huckleberry patch secret is you don't, say, file it (with) a government agency."

Zinke has spent much of this campaign railing against the so-called “deep state,” alleging that an entrenched federal bureaucracy stifles meaningful change.

The Montana Supreme Court on Friday struck down an attempt by Republicans in the Legislature to change the way the high court’s justices are elected.

After his second impeachment, former President Donald Trump made it his mission to defeat Rep. Liz Cheney, his chief Republican rival. On Tuesday, he succeeded.

The money comes from the federal government through the American Rescue Plan Act.

"It's extremely dangerous," the prison's union president said this week.

Some Republican legislators want to return part of an estimated $1 billion surplus to taxpayers, while others want to spend the money offsetting future spending obligations.

Montana has two House seats up for election this November.

Montana remains on track to switch over to a new statewide voter management system in January 2023, after an encouraging test of the system in the state's June primary.

Massive asteroid set for closest approach to Earth since 1914