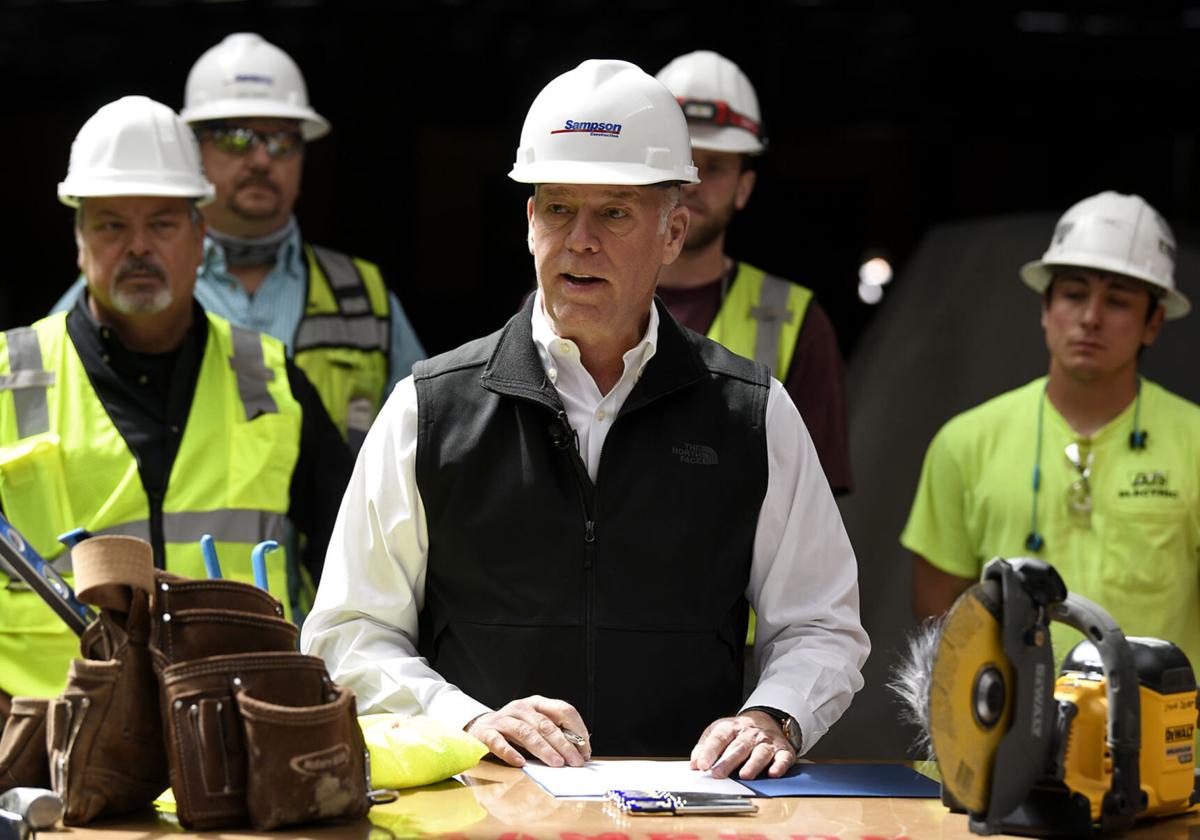 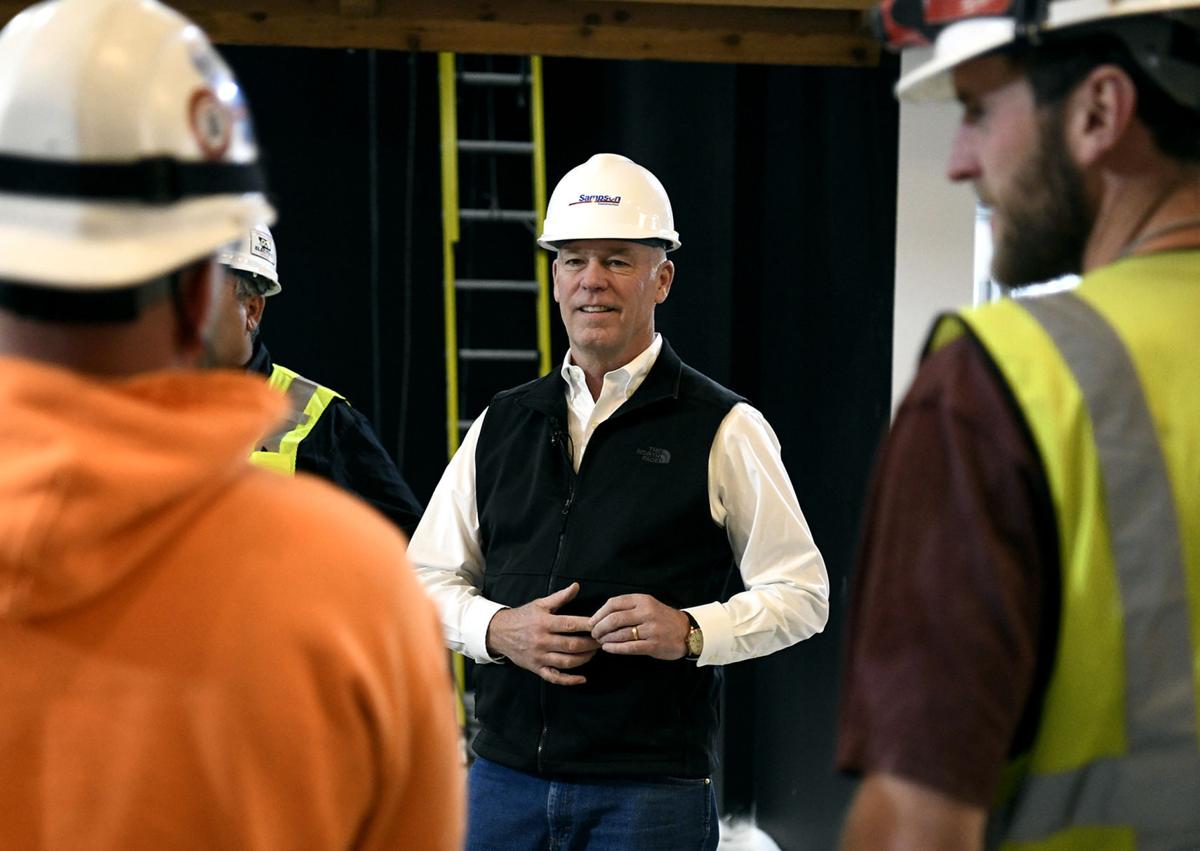 Gov. Greg Gianforte talks with D.J.'s Electric employees at the construction site of the new Scheels All Sports store.

On the concrete floor of a massive construction site surrounded by workers wearing hardhats in Missoula, Gov. Greg Gianforte signed a bill into law Monday that he says will help businesses hire and train skilled workers.

The Montana Trades Education Credit, or HB 252 as it was officially called in the state Legislature, provides $1 million per year in 50% tax credits to businesses for qualified training and education expenses.

Businesses can claim up to $2,000 per employee and up to $25,000 per year. Only "trades" businesses can qualify, and the definitions listed in the bill's language include painters, roofers, truckers and welders.

Gianforte toured the huge new Scheels All Sports store that's under construction at Southgate Mall and spoke with electrical workers from D.J.'s Electric, a Bitterroot Valley company that's working on the store.

"Montana faces a skilled labor shortage," Gianforte said. "A four-year college degree isn't for everyone, and Montana needs carpenters, electricians, plumbers, machinists and pipefitters. We ought to ensure that Montanans have access to the training and education they need to acquire and refine these skills."

The bill will provide for as many as 1,000 trade scholarships per year for Montanans, he said.

"So, businesses like D.J.'s Electric can invest in their employees and businesses," Gianforte said.

The bill was sponsored by Rep. Llew Jones, a Republican from Conrad. It was supported by many industry groups during hearings in the Legislature.

Sam Sill, the government affairs director for the Montana Association of Realtors, spoke in favor of the bill earlier this year during a committee hearing.

"The number one problem for the real estate industry and for homebuyers is a lack of inventory," Sill said. "That is certainly at least in part due to the fact that we’re just not building enough homes. Part of the reason for that is a significant shortage of skilled labor in the building trades. We’re here today to support this bill because it’s going to provide some good opportunities to train more people up and get more folks in the trades work.”

The bill will allow employers and employees to decide on training that best fits the worker, Gianforte said.

"This new bill will strengthen our workforce, ensuring that Montana workers are well-equipped to succeed, thrive and achieve the American dream," Gianforte said.

Stephen Harrness, vice president of D.J.'s Electric, said the company has 10 workers on the Scheels All Sports job site.

"I'd like to thank the governor for signing this bill here today, and in supporting the apprentices, the electrical apprentices that we have in Missoula and in Montana in general," Harrness said.

"So, you know, this really allows us to reinvest the money into our skilled labor," Harrness added. "You know, it used to be that going into the trades and getting your hands dirty was almost like a four-letter word. And that's not the case. Now these guys are highly skilled, they're highly trained and they're very well-paid."

Ty Magdos, a third-year electrical apprentice with D.J.'s Electric, said he has two college degrees but he likes working with electricity because it provides job security.

Apprenticeships are appealing because you get paid instead of going into debt for college, Magdos said.

"We're glad that these things are happening so we can keep the apprenticeships going in this valley, because without those we wouldn't have as many jobs that we all need," he said.

If you have $136 million to spend, you could own the Climbing Arrow Ranch near Bozeman, the setting for some of the scenes in the 1992 movie "A River Runs Through It."

Montana added 149 new cases of COVID-19 on Friday, and 12 more deaths due to the virus were confirmed.

'Beliefs, fear and anger': The roots of the Freemen still entrenched 25 years later

The third convicted Montana Freemen is living in Billings after spending the majority of the last 25 years of his life in prison.

A charitable beef nonprofit plans to open a processing plant near Livingston next year to butcher meat for food banks and ranches with direct retail sales.

As the dust settles after the 67th Montana Legislature, one thing is for certain: the debate over nonresident hunting licenses and the role of outfitting is far from over.

The lawsuit is another legal challenge to the GOP-led judicial reforms that passed out of the 2021 Legislature.

Twenty-five years ago this week, the tiny town of Jordan, Montana, was overrun.

Gov. Greg Gianforte talks with D.J.'s Electric employees at the construction site of the new Scheels All Sports store.