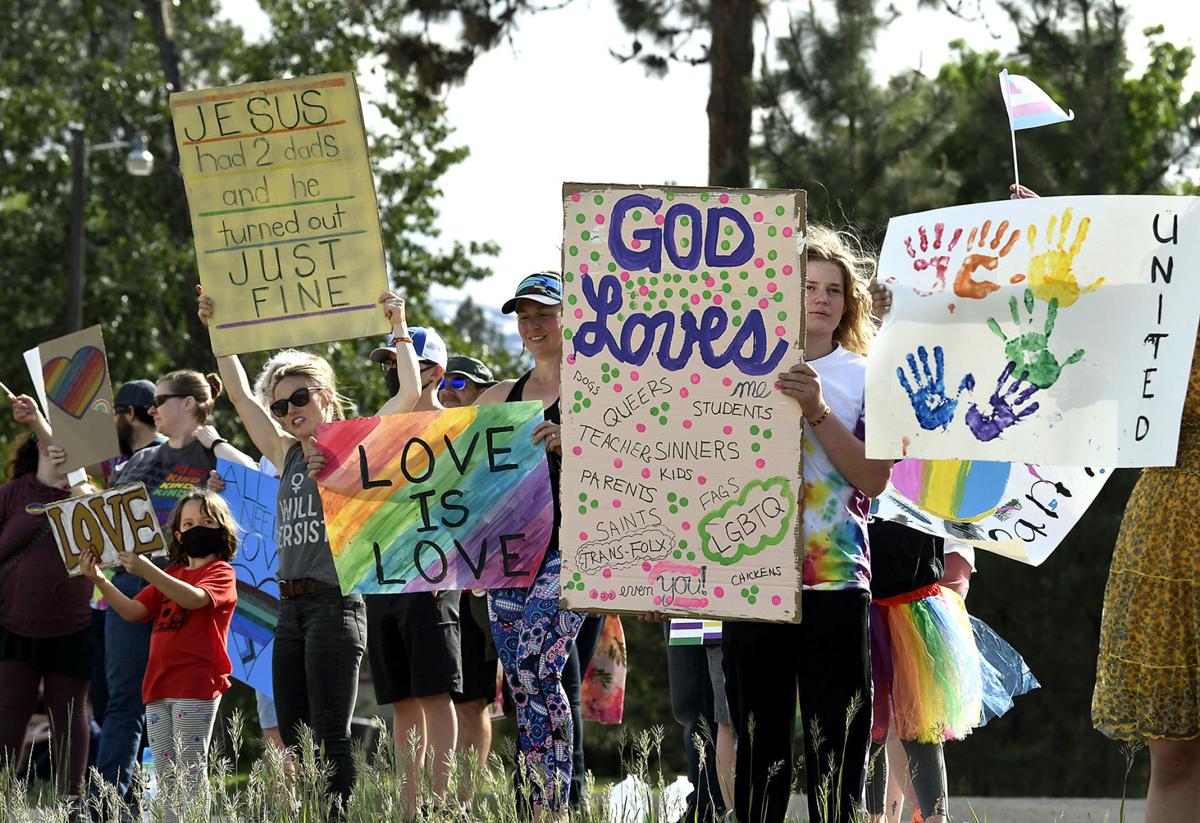 People supporting Florence-Carlton middle school's Gay-Straight Alliance stand next to the highway through Florence on June 8 prior to the school board's virtual meeting. 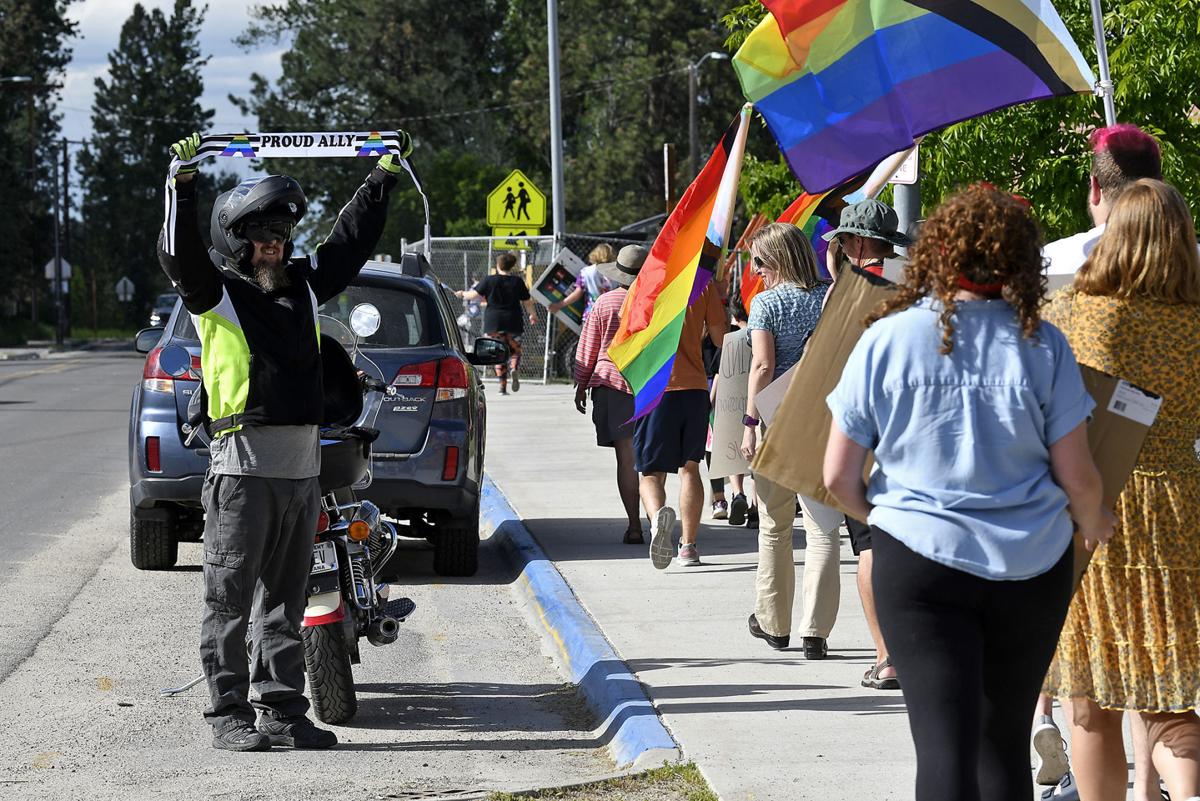 Jason Timm shows his support for the group supporting the Gay-Straight Alliance as they walk in front of Florence-Carlton School on Tuesday. 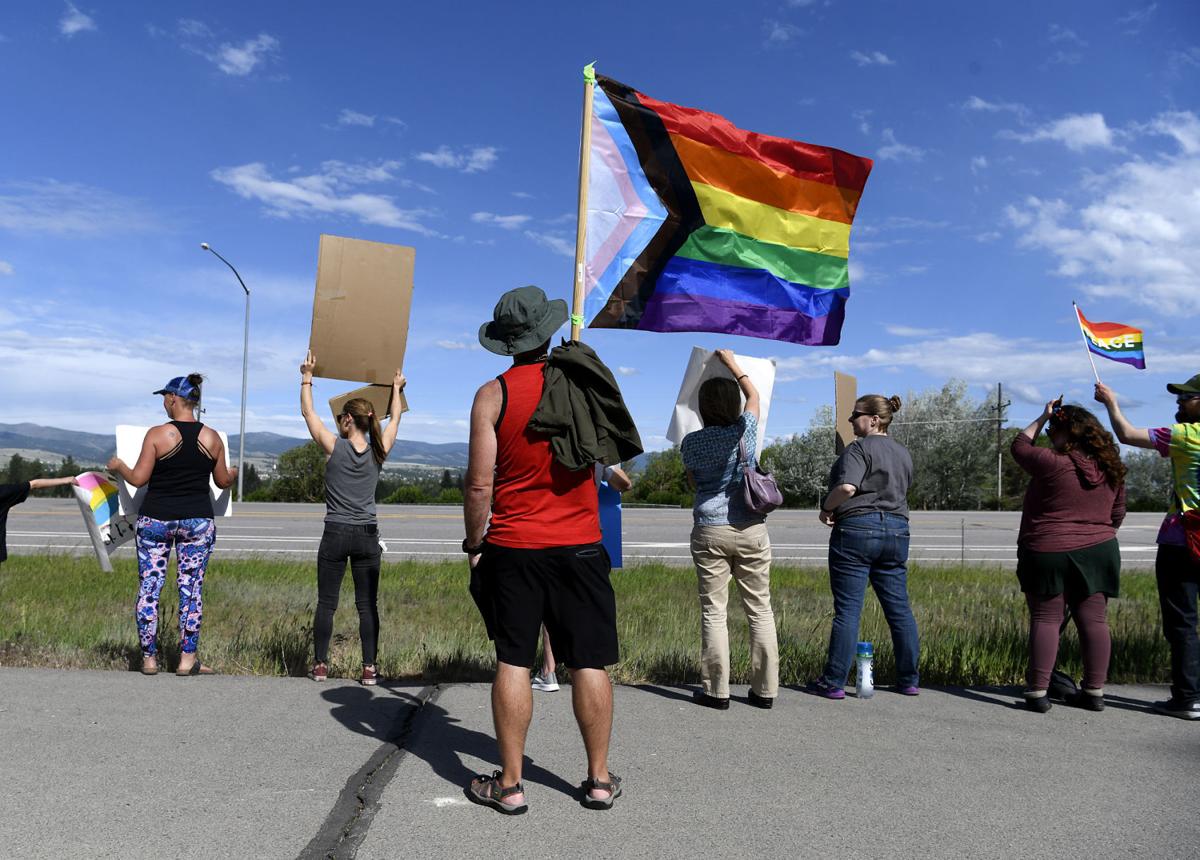 Supporters of the Gay-Straight Alliance stand along the highway through Florence on Tuesday.

The furor over a student LGBTQ club in the Florence-Carlton district continued Tuesday night, with often-heated debate in a five-hour school board meeting.

The meeting, originally set for the school gym, was moved to Zoom for safety reasons. The district stated in a now-deleted Facebook post that there were threats of people bringing firearms onto school property.

More than 220 people logged in to debate a policy change spurred by the existence of a new Gay-Straight Alliance club at the middle school.

Many argued in favor of requiring permission slips, so that parents know what their children are doing during the school day.

Others said that parental consent for informal groups, such as the Gay-Straight Alliance, would take away safe spaces for LGBTQ and allied youth to convene.

A handful of attendees were removed for speaking out of turn, interrupting those who had the floor during the public comment period. One was booted for calling those opposed to the Gay-Straight Alliance "Jesus freaks."

The school board ultimately tabled the proposal from trustee Matt Reeves to limit student participation of informal groups to their affiliated school and require parental consent to join informal clubs.

At the May meeting, the board had approved the first reading of the policy in a 3-2 vote to require parental permission for students to participate in "formal" clubs — groups that use the school’s name, facilities, logo or team name and raise and deposit funds. "Informal" clubs, like the Gay-Straight Alliance, would not require permission from parents.

'Students have no rights'

Terri Lackey, whose name is often signed under Facebook posts from the group Stand Together for Freedom, told the board that students have no rights until they turn 18.

“The school has no business taking those rights away from the parents and giving them to the children," Lackey said. "My children had no rights unless I gave them to them, they had the right to do things when I gave them permission.”

Stand Together for Freedom describes itself as a “community of God-fearing constitutional patriots” in the Bitterroot Valley.

Teachers at the school voiced concerns that requiring parent permission to attend formal groups would impact their classrooms, particularly at lunchtime.

“If you were to institute a policy where they had to have permission slips, that would effectively shut down any opportunities for kids to get fellowship and friendship,” said teacher Taryn Petit.

Others were concerned about only allowing informal groups at the high school level. Frank Johnston recalled from his middle school experience that there was a morning prayer group to support a classmate who was in a serious car accident.

“If you go forward with this decision, any small group like that won’t be able to exist, and that’s just wrong. It’s wrong to punish every student because some parents don’t agree with one particular club,” Johnson said.

The short notice for the virtual meeting resulted in confusion. About 30 people involved with the Bitterroot Alliance for Diversity and Inclusion met at the school with signs to show support for the Gay-Straight Alliance club. They walked from the parking lot to Highway 93, and were joined by about 10 other people with pride flags and rainbow-colored signs. Several cars passing by honked in support.

Several people with Stand Together for Freedom showed up to the parking lot and left shortly after the meeting started. Two sheriff's deputies were outside the gym.

'A nightmare for administration'

Reeves, vice chair of the board of trustees, proposed a motion to limit the participation of informal groups based on their affiliated school, meaning an elementary student could not join a middle school club. He added an amendment to the motion that would require parental consent to join informal clubs. The motion and amendment were seconded by trustee Lacy Janes.

“I just want the board to know if that’s the language that’s adopted it’s going to be a nightmare to manage informal groups,” said Brian Rayburn, Florence-Carlton public schools superintendent.

If the motion is approved, certain groups will “go underground, they’ll have these conversations at the lunch table,” Rayburn added.

Students going to a teacher’s classroom to play board games or get help with school work would be considered an informal group, he said.

“Not only is it a nightmare for administration, I don’t feel like it’s the direction our students and staff are asking for, or our community is asking for by any means,” Bauer said.

Board members went back and forth attempting to clarify and modify the definition of an informal group. Janes proposed defining an informal group by the number of times they meet. She also pitched requiring parental consent for such groups at the elementary and middle school level.

“Students' rights are not above parents' rights and I think that’s a big issue at hand,” Janes said. “Parents don’t have to let their rights go because kids think that they have more rights.”

After 10 p.m., trustee Ben Crocker suggested tabling discussion on the matter “given the lateness of the hour” and “the complexity of the decision.” He also pointed out that they were missing one trustee, as Bobbie Ketelhut was not present.

Jay Dixon, a former Florence-Carlton trustee from 2014-2018, expressed his contempt about tabling discussion due to the time of night and said he felt the motion at hand was too confusing.

Other commenters worried about perception from people who don't live in the Bitterroot Valley, with one saying the issue would only “rile up people from outside of our community.”

After nearly two hours of discussion on the policy alone, Reeves rescinded his motion in favor of tabling discussion until a future meeting with the district’s legal counsel. Janes followed up with a motion to end the meeting, which concluded around 11:30 p.m.

The issue will be discussed at a special meeting in July, which has not been scheduled yet.

At first, Deb and John Wood thought somebody shot four of their goats Wednesday evening.

A Washington man has died in Yellowstone National Park and a search continues for his camping partner.

Two Missoula women dispute an assisted living facility's claim this summer that all residents who had COVID were asymptomatic. Their father had fairly severe symptoms and died within 10 days of contracting the virus in the facility, they said.

Public health programs under assault in Montana and nationally

The resignation of health officer Nick Lawyer continues a trend of public health officials leaving their posts - he's the 17th health official in Montana to resign, be fired or retire since the beginning of the pandemic.

People supporting Florence-Carlton middle school's Gay-Straight Alliance stand next to the highway through Florence on June 8 prior to the school board's virtual meeting.

Jason Timm shows his support for the group supporting the Gay-Straight Alliance as they walk in front of Florence-Carlton School on Tuesday.

Supporters of the Gay-Straight Alliance stand along the highway through Florence on Tuesday.