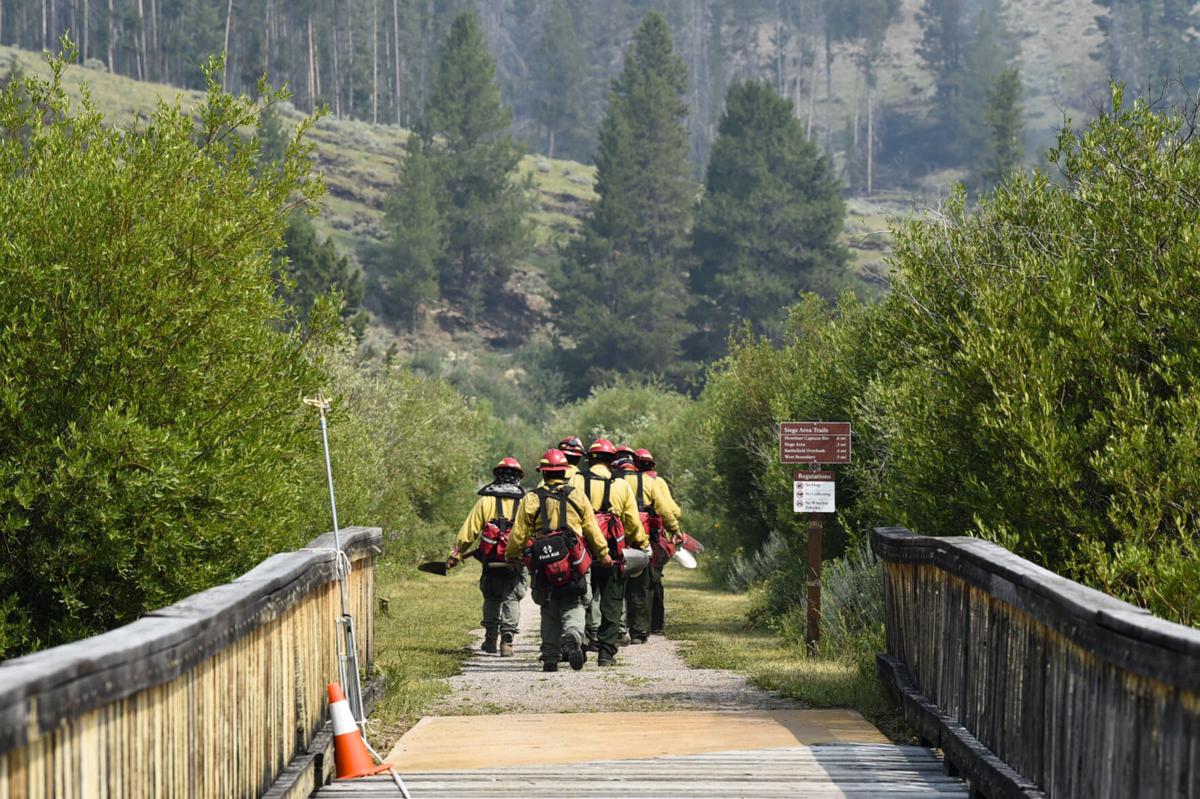 A hand crew hikes into the Big Hole National Battlefield on Tuesday while fighting the Trail Creek fire west of Wisdom. 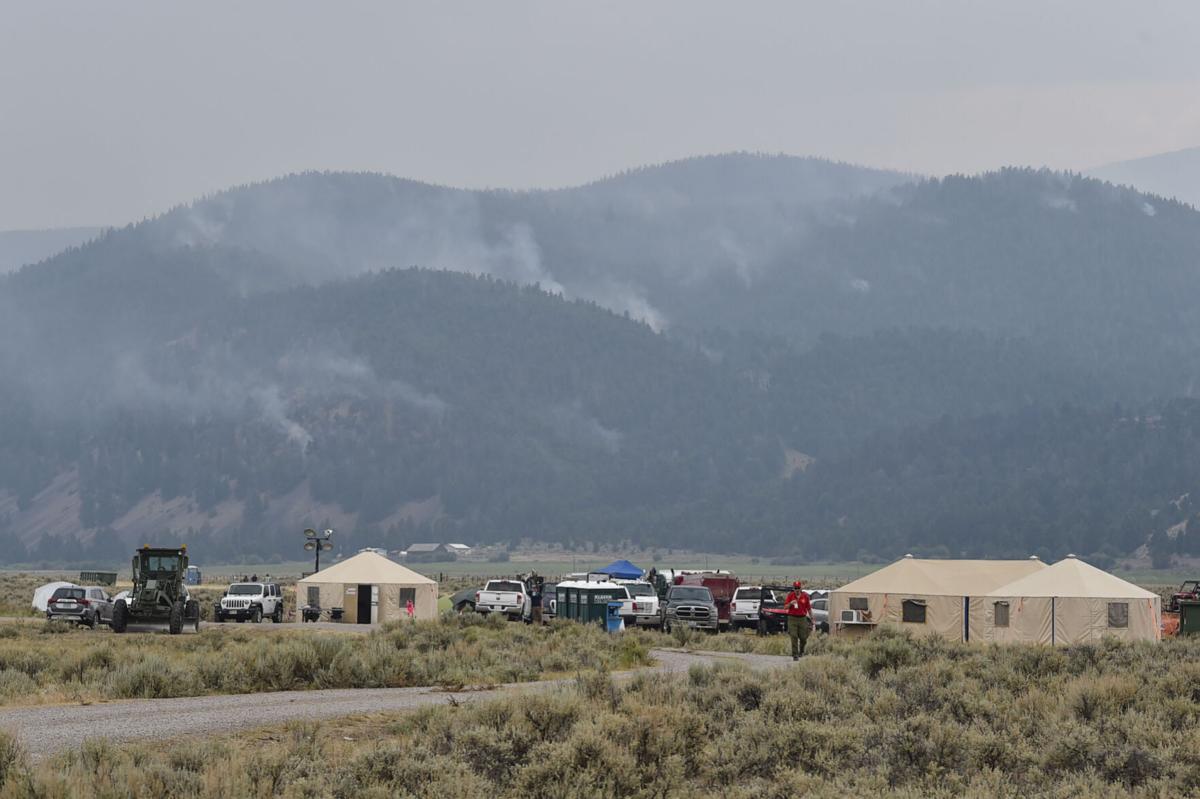 The Alder Creek fire smolders just beyond the incident base outside Wise River on Tuesday. 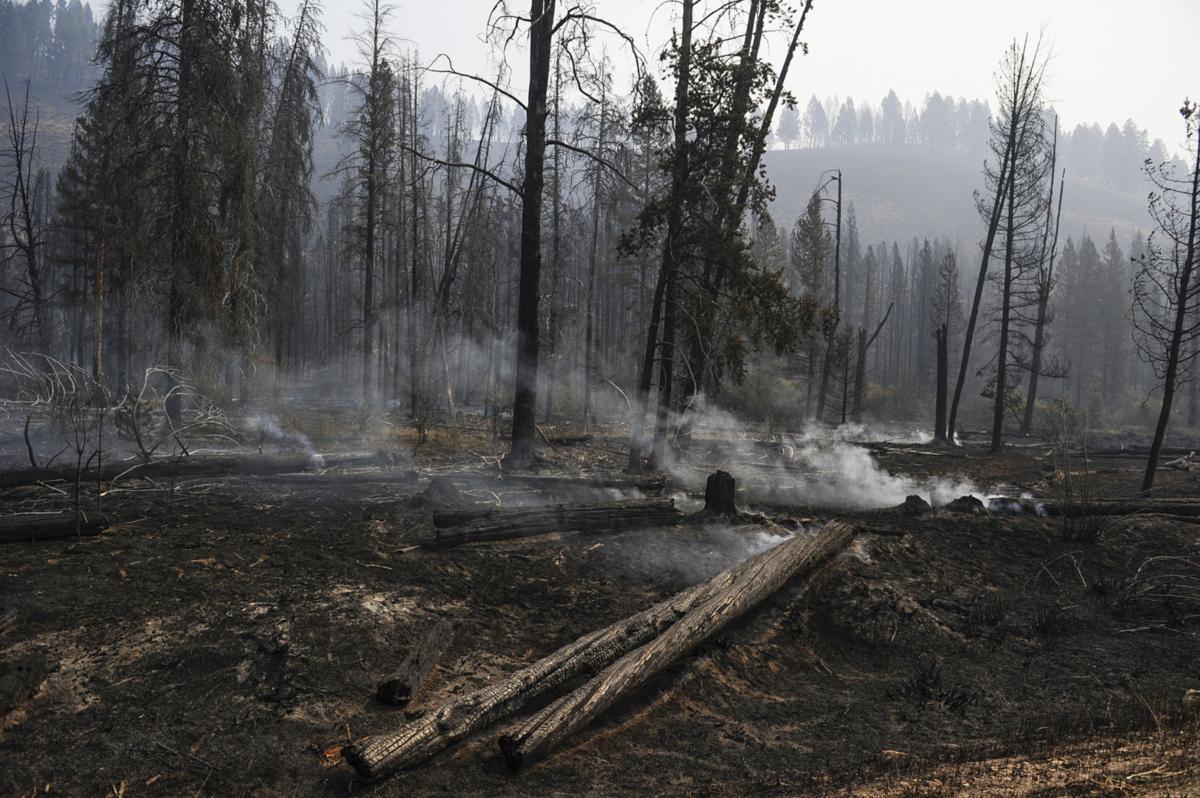 Trees smolder inside the Trail Creek Fire along Highway 43 on Tuesday. 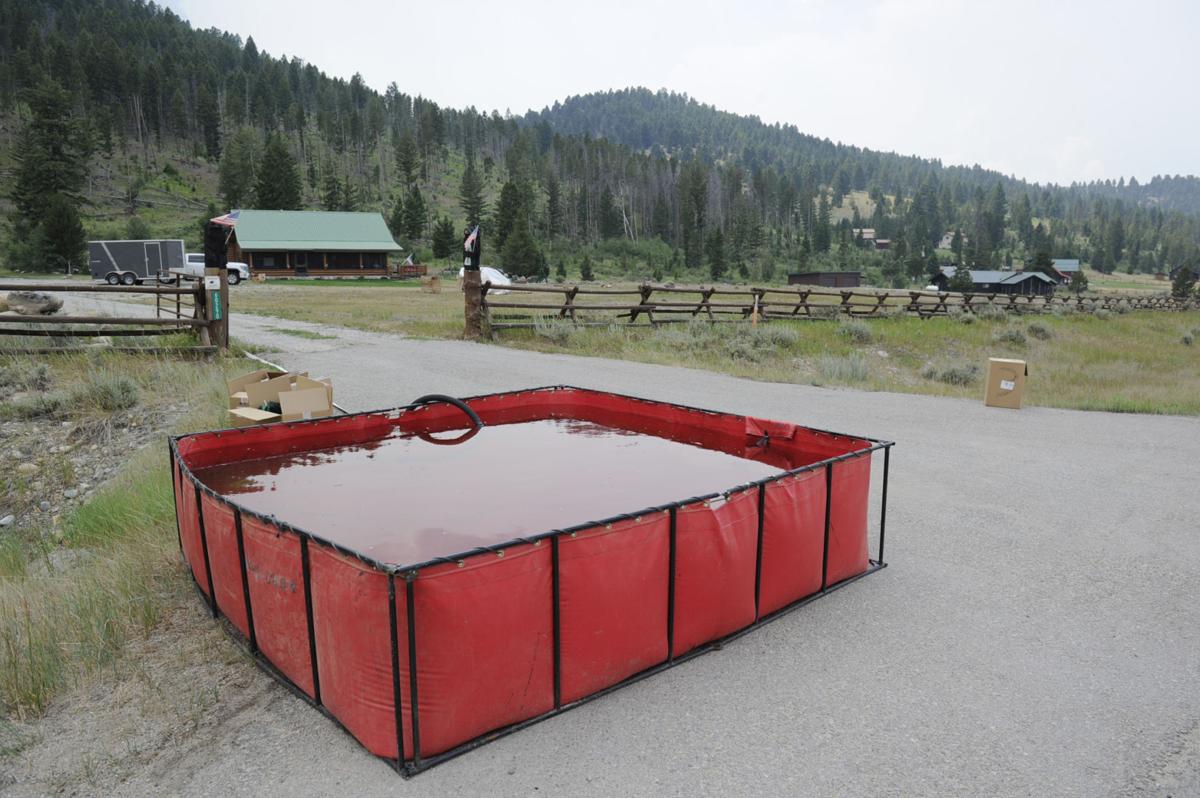 Temporary water tanks for structural protection are stationed outside residences along Highway 43 outside Wise River on Tuesday. 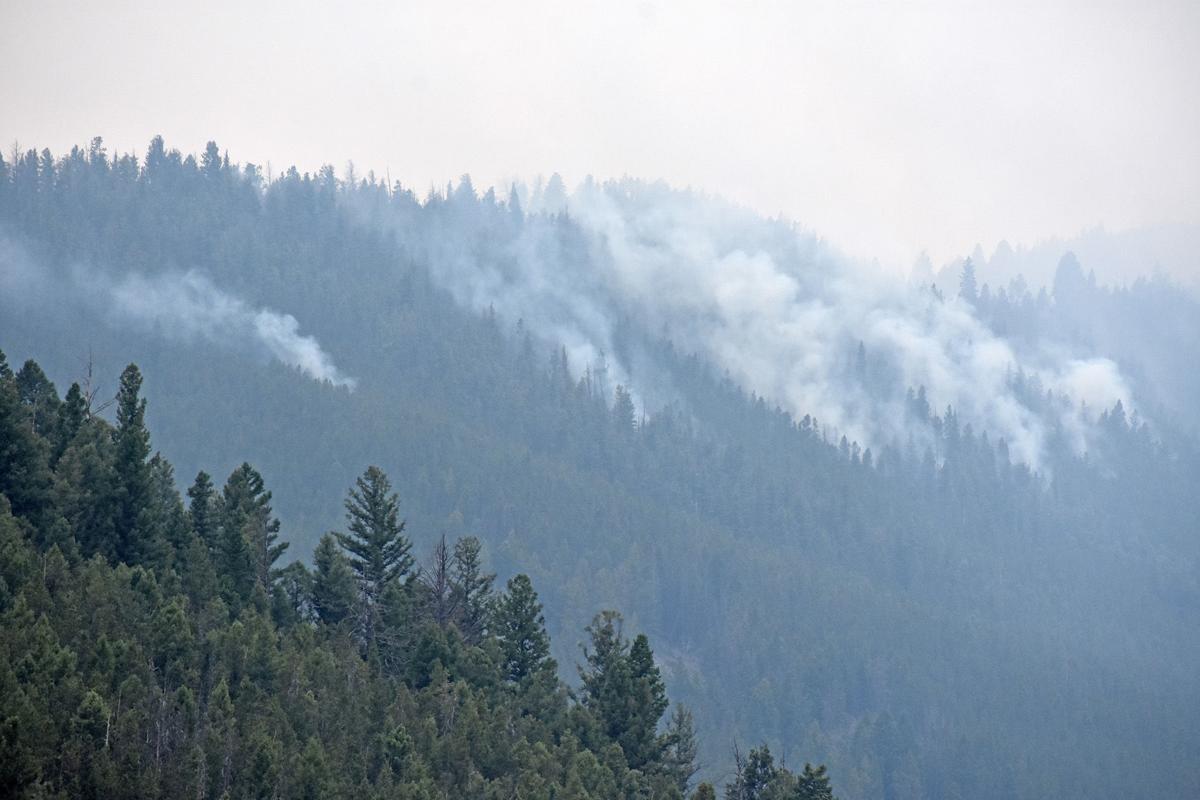 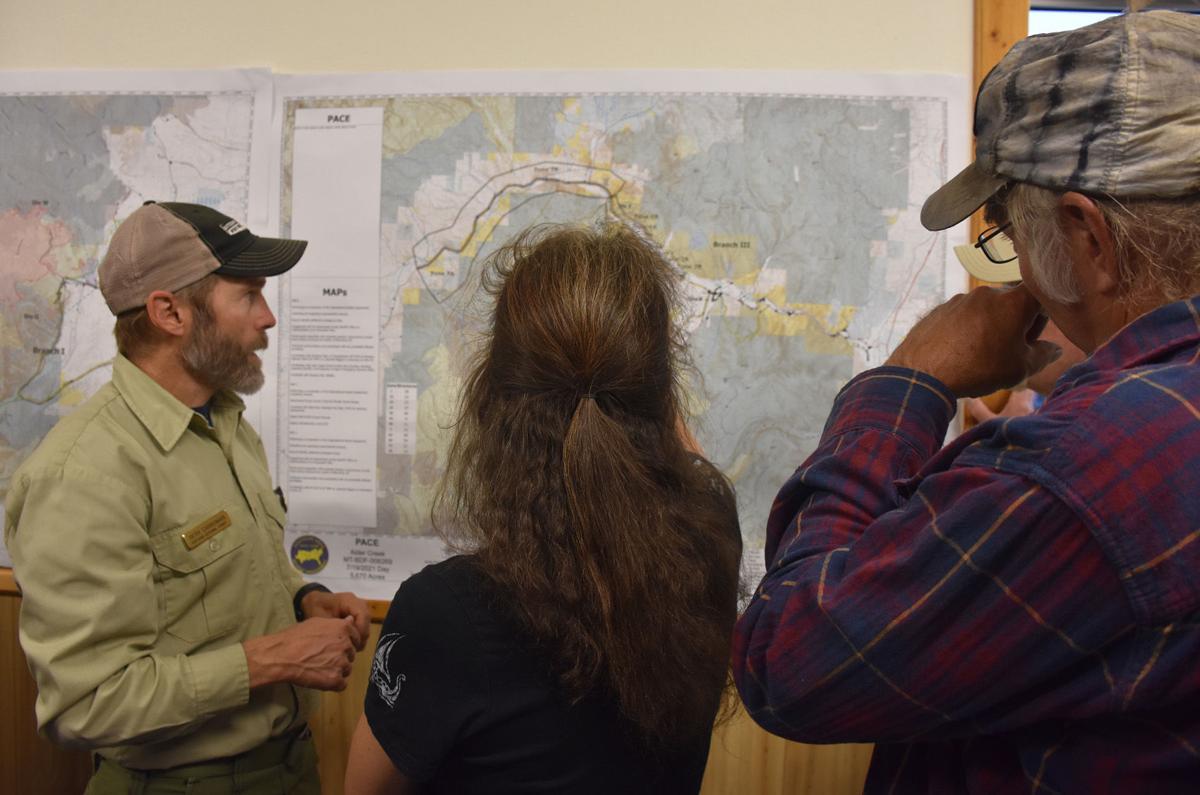 Seth Carbonari of the U.S. Forest Service goes over a map of the Alder Creek Fire with people who live in the vicinity of Wise River. He and other fire officials held a public meeting Monday night to discuss the fire. 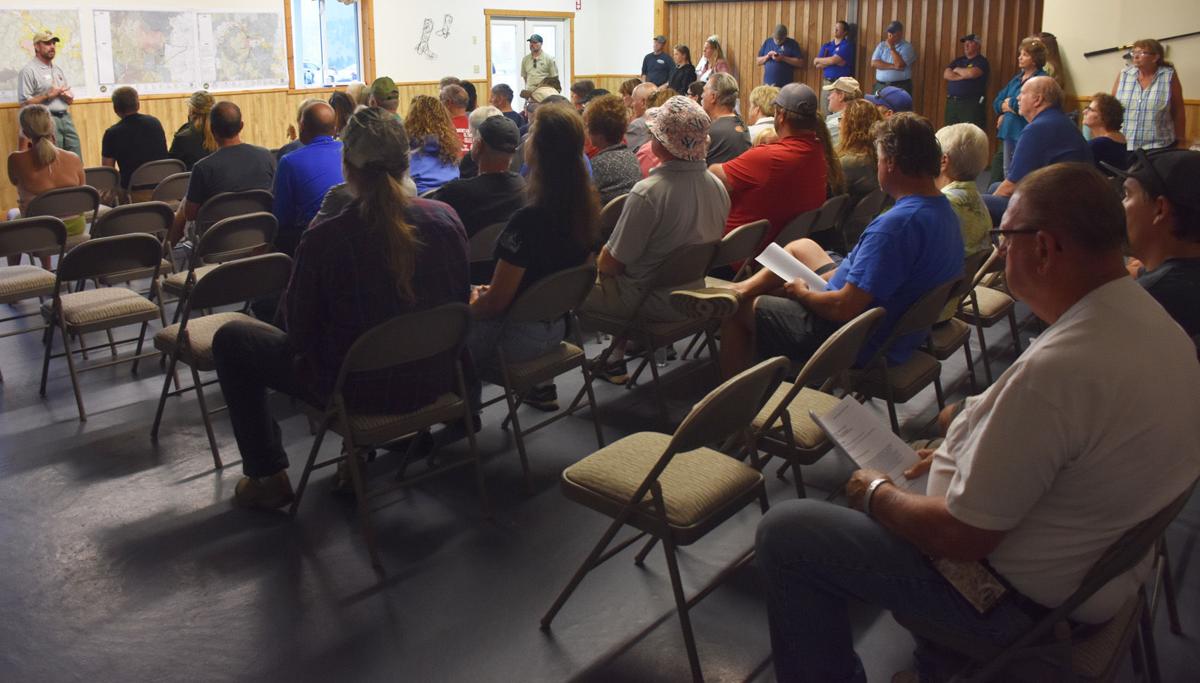 The team fighting the Alder Creek Fire provides an overview of the wildfire to about 70 people during a public meeting Monday night in Wise River.

Although the wildfire’s natural growth has brought it closer to lower elevation areas where firefighters can actually work safely to contain it, that expansion has also moved it closer to some structures.

Seth Carbonari, a fire management officer for the U.S. Forest Service, praised residents and property owners around Wise River for their forbearance and said progress is being made.

“We are in a much better place than we were a couple of days ago,” he said, noting he is "cautiously optimistic."

Yet Carbonari also sounded a cautionary note about the fire, which has been burning since July 8 in the Beaverhead-Deer Lodge National Forest.

“That doesn’t mean all the danger has passed,” said he said.

The smell of smoke was pervasive.

Later that night, the area received a sprinkling of rain. It wasn’t a high volume of precipitation but helped by increasing humidity, fire officials said.

But exceedingly dry conditions throughout southwest Montana led Anaconda-Deer Lodge County, Butte-Silver Bow County and the BLM to announce Tuesday that the local governments and the agency were each enacting Stage II fire restrictions to take effect this week. The restrictions prohibit activities that include but are not limited to building campfires and operating motor vehicles off designated roads and trails.

Carbonari said the Alder Creek Fire is one of the region’s and the nation’s highest-priority fires. For one thing, the fire poses a risk to roughly 200 primary structures.

About 90 people attended the meeting at the Wise River Community Building; roughly 20 of those were involved with the firefighting effort.

The bad news focused on two new wildfires growing in the region – the Christiansen Creek Fire, about six miles west of the Alder Creek Fire, and the Black Mountain Fire, about 13 miles south of Jackson and east of Skinner Lake.

Fire officials are concerned the lightning-caused Christiansen Creek Fire could merge with the Alder Creek Fire. The Black Mountain Fire has led already to evacuations of campgrounds and other facilities in its vicinity.

Carbonari said he understands that people long for certainty about the fires’ potential progression. But certainty isn’t readily available when it comes to wildfire behavior, he said.

The crowd at Monday night’s meeting included Karen VanDaveer and her husband, John. They decided last week to retrieve from their cabin near Wise River the possessions they consider irreplaceable.

Karen said that the couple’s cabin is a retreat and not a primary residence, a reality that makes the threat from the Alder Creek Fire less consequential to them than the peril facing friends in the Wise Creek community whose homes are primary residences.

Mike and Colleen Fink have a second home across the Pioneer Mountains Scenic Byway from the fire. The blacktop corridor provides some measure of protection unless the wildfire blows up and races across the dry sagebrush in the foothills and flats nearby and jumps the road.

Mike Fink said he and Colleen feel fairly comfortable that the Alder Creek Fire won’t reach their property because of the work of the people fighting the wildfire.

“It seems these guys have a strategic plan,” he said.

The Southern Area Blue Team has been managing the Alder Creek Fire and Trail Creek Fire for about a week.

The VanDaveers also praised the team and the fire crews working with them.

The fire crews have placed “Fold-Da-Tank” portable water reserve stations near homes along Highway 43 west of Wise River and elsewhere in places where structures are at risk from the Alder Creek Fire.

As of Tuesday afternoon, the Alder Creek Fire was estimated to be about 5,674 acres, with more than 300 people fighting the blaze. The fire was discovered July 8. A cause has not been determined.

Eric Winthers of the Forest Service provided a brief update Monday night on the Trail Creek Fire west of Wisdom. Firefighters are working to protect structures, including the Ruby Ranch and buildings at the Big Hole National Battlefield, he said. The National Park Service site closed July 17 until further notice because of fire activity.

As of Tuesday afternoon, the lightning-caused Trail Creek Fire was estimated to be 23,070 acres. Personnel fighting the fire totaled 147.

“Around 2 p.m. the fire started throwing spots and showed 100- to 250-foot flame lengths along the highway and completely blew through a fire break constructed along Placer Creek,” said Diaz.

Then, the fire made it to the top of Battle Mountain right above the Big Hole National Battlefield. It was at that point operations personnel on the fire drew up a plan to do some tactical burning on the edge of the battlefield to protect the historical resources present.

“The operation was successful, but we aren’t done.” Diaz said. “We have more firing operations to do to protect the battlefield because the fire intensity will come back in five to seven days.”

Firefighters had to get creative to protect the battlefield because of historic features in the park and because the remains of between 60 and 90 Nez Perce are buried there. The retardant and water drops they would typically use would destroy the features and tarnish the burial ground.

According to Mandi Wick, supervisory park ranger for the Big Hole National Battlefield, there were three primary features on the battlefield they wanted to protect. Primarily, the “siege site” where the pits dug by soldiers fighting the Nez Perce Indians remain. Also important to protect were two trees, called the Twin Trees, where the Nez Perce drove the soldiers into retreat and the site where soldiers had stationed a howitzer.

Although the Monday night weather brought a lull to the intense fire behavior previously seen, fire officials warn that the same erratic fire behavior could be back by the weekend.

“It’s not out,” Paul Reynolds, operations chief on the Trail Creek Fire said. “It’s just out there waiting for the right conditions to explode again.”

The Goat Fire, burning in heavy timber east of Philipsburg, was estimated Tuesday to be about 95 acres. The Forest Service said fire crews are working on “structure protection measures in advance of predicted fire behavior modeling.”

The agency reported “the terrain and extreme slope of this fire location make helicopter and air-asset use a vital resource. A helicopter is conducting bucket drops as part of suppression efforts. And officials are flying over the fire daily to assess its circumstances."

Cat McRae, a spokeswoman for the Beaverhead-Deer Lodge National Forest, said officials believe lightning started the fire. The site is rugged, rocky and steep, she said. Rain was falling at the Goat Fire on Tuesday afternoon, McRae said.

James and Karen Crockett live near Lower Seymour Lake and are thus several miles from the Alder Creek Fire. But the couple said they have attended two public meetings about the fire just to keep tabs on its behavior and circumstances.

“This is not the time and place to go back 20 years and discuss beetle-killed trees,” he said.

Crockett expressed appreciation for the crews fighting the fires.

“They’re out there living in and breathing that smoke,” he said. “People don’t think about the sacrifices they make for us.”

For exemptions and rules on having backyard fires in Butte-Silver Bow County, go to this link on the county’s website: https://www.co.silverbow.mt.us/civicalerts.aspx?AID=1390

The Trail Creek Fire burns along Highway 43 on Saturday evening.

A hand crew hikes into the Big Hole National Battlefield on Tuesday while fighting the Trail Creek fire west of Wisdom.

The Alder Creek fire smolders just beyond the incident base outside Wise River on Tuesday.

Trees smolder inside the Trail Creek Fire along Highway 43 on Tuesday.

Temporary water tanks for structural protection are stationed outside residences along Highway 43 outside Wise River on Tuesday.

Seth Carbonari of the U.S. Forest Service goes over a map of the Alder Creek Fire with people who live in the vicinity of Wise River. He and other fire officials held a public meeting Monday night to discuss the fire.

The team fighting the Alder Creek Fire provides an overview of the wildfire to about 70 people during a public meeting Monday night in Wise River.