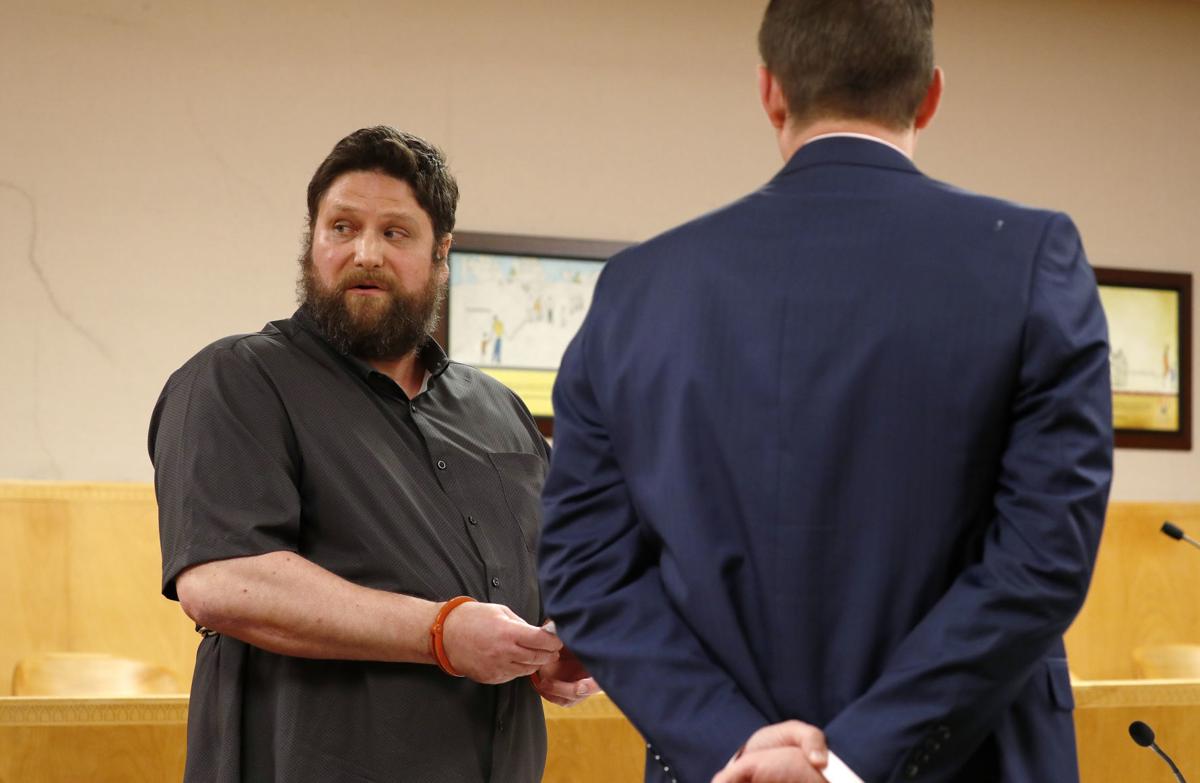 Ryan Glenn McElmury stands with his attorney Daniel Ball as he reads his statement during his sentencing in Yellowstone County District Court on Friday for 10 felony counts related to 2018 crime spree. 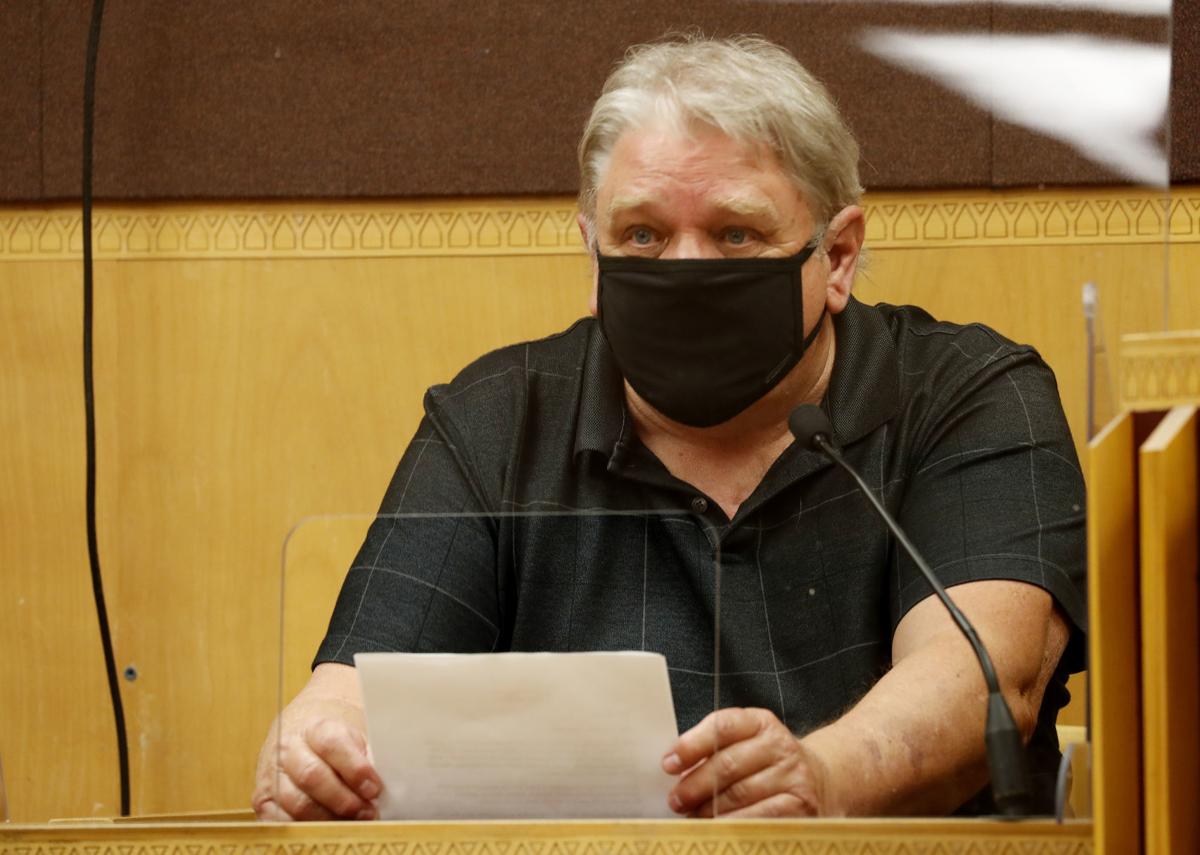 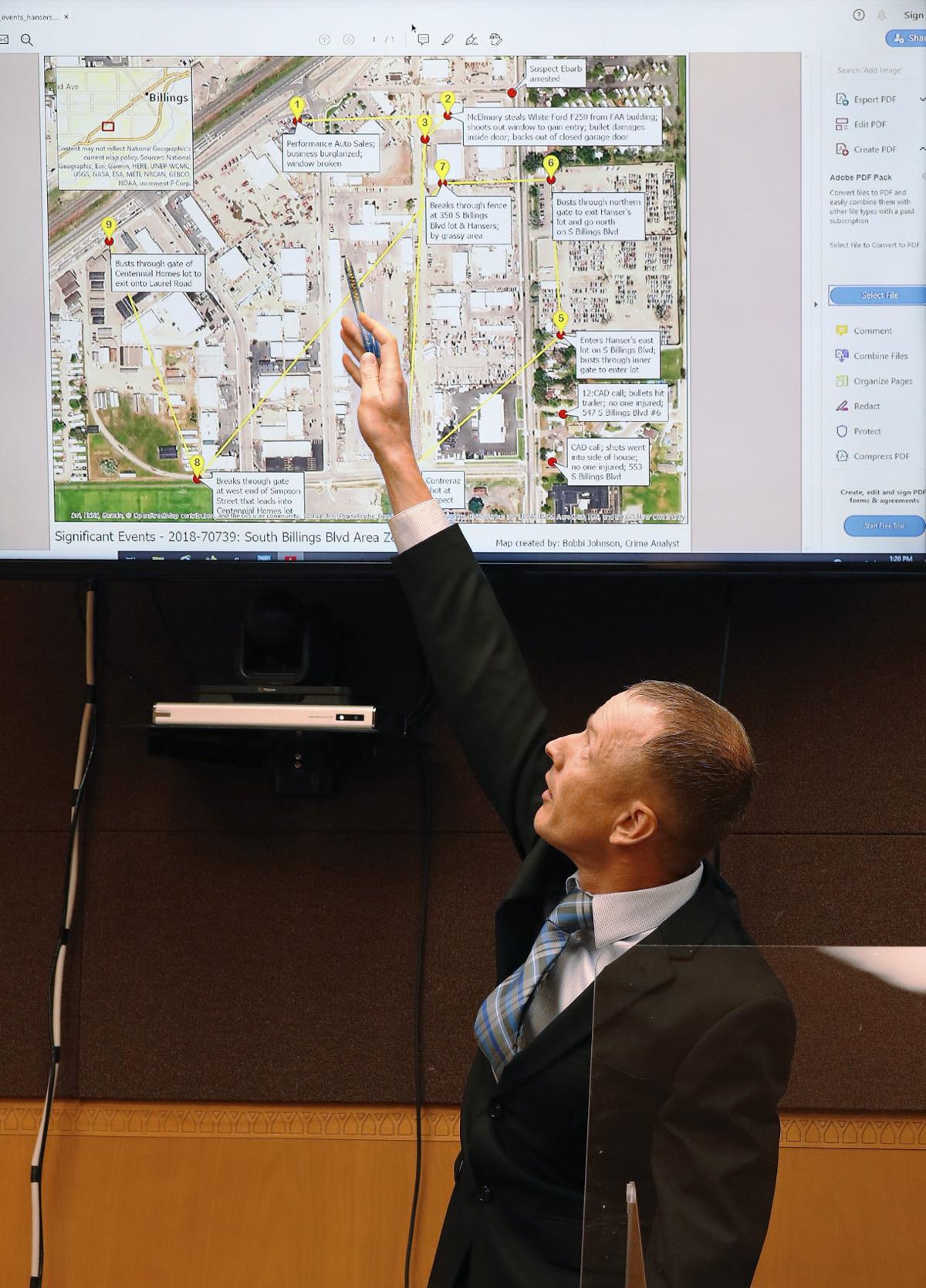 Billings Police Department detective John Tate points out areas of interest on a map during a sentencing hearing for Ryan Glenn McElmury in Yellowstone County District Court on Friday for 10 felony counts related to 2018 crime spree. 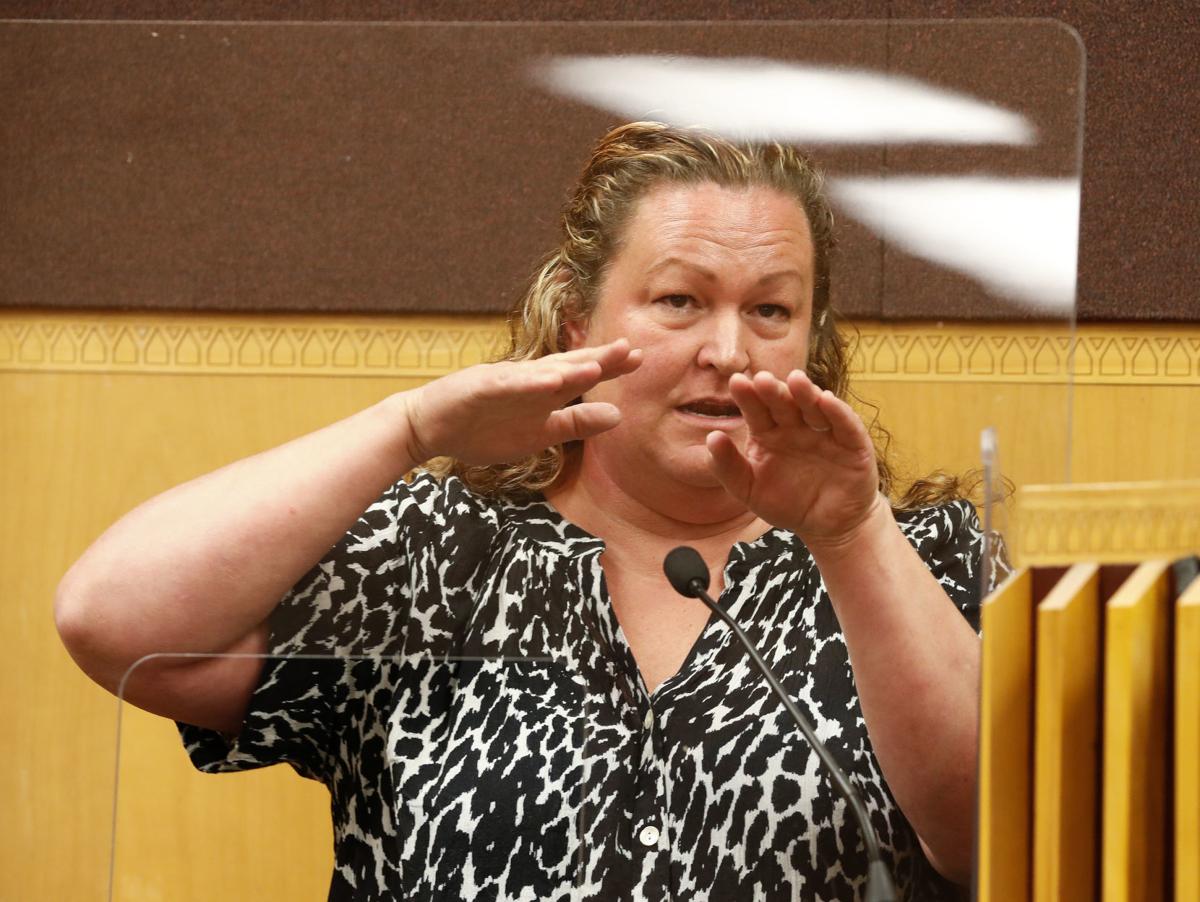 Constance Heller testifies during a sentencing hearing for Ryan Glenn McElmury in Yellowstone County District Court on Friday for 10 felony counts related to 2018 crime spree. Heller and her family were home when McElmury stole one of their vehicles and was arrested on their property north of Billings. 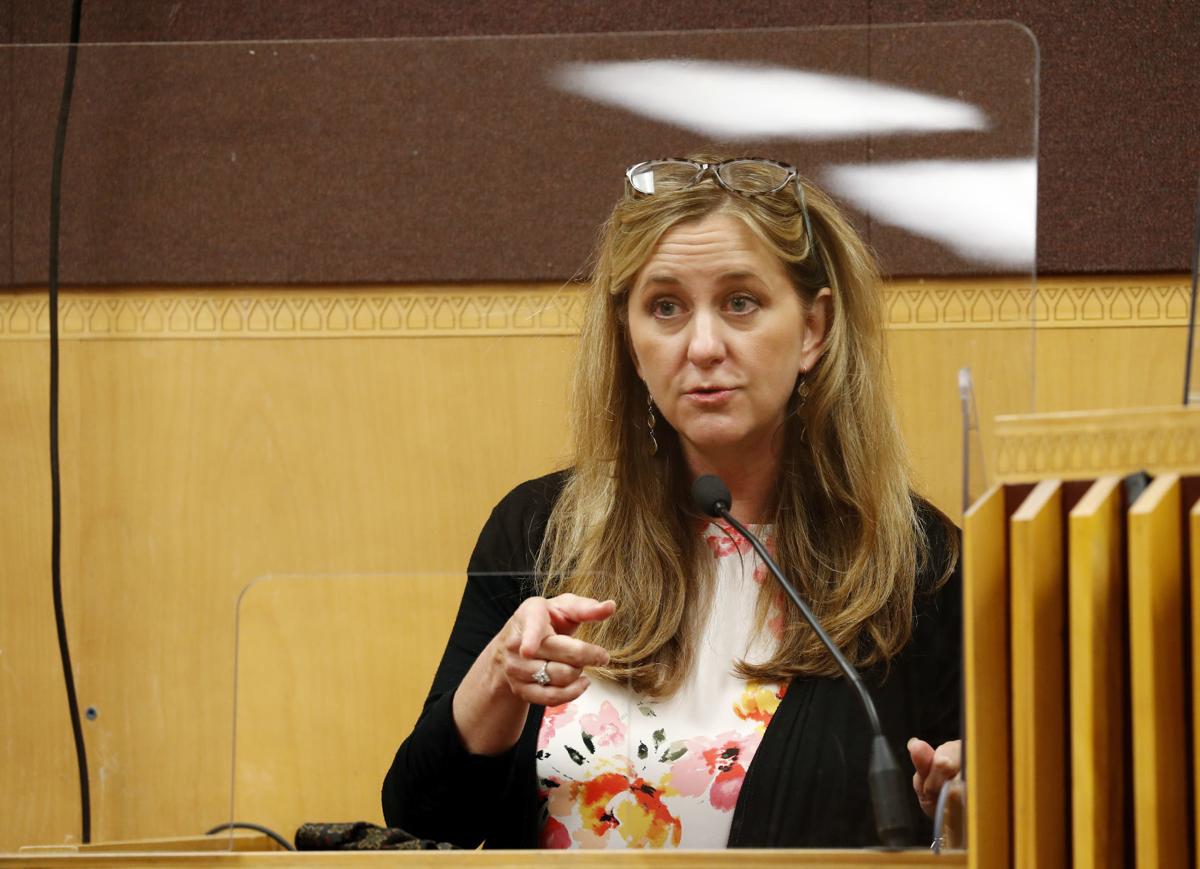 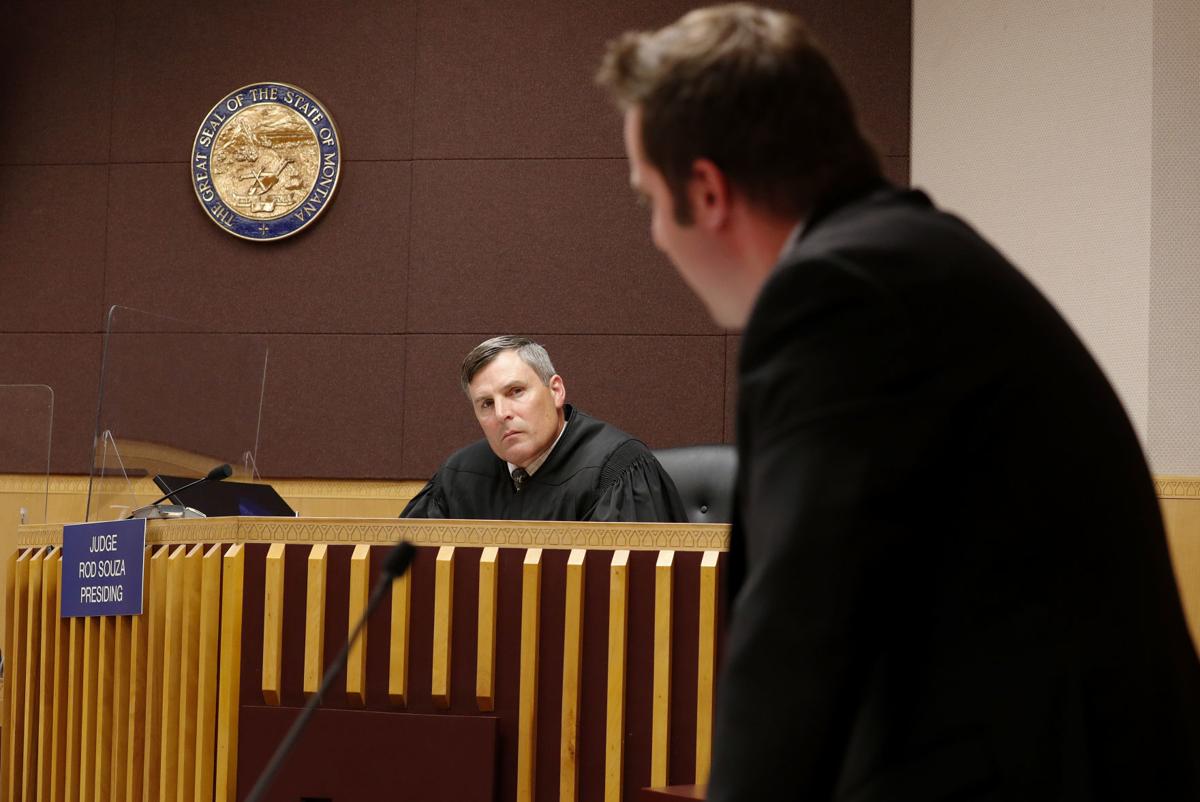 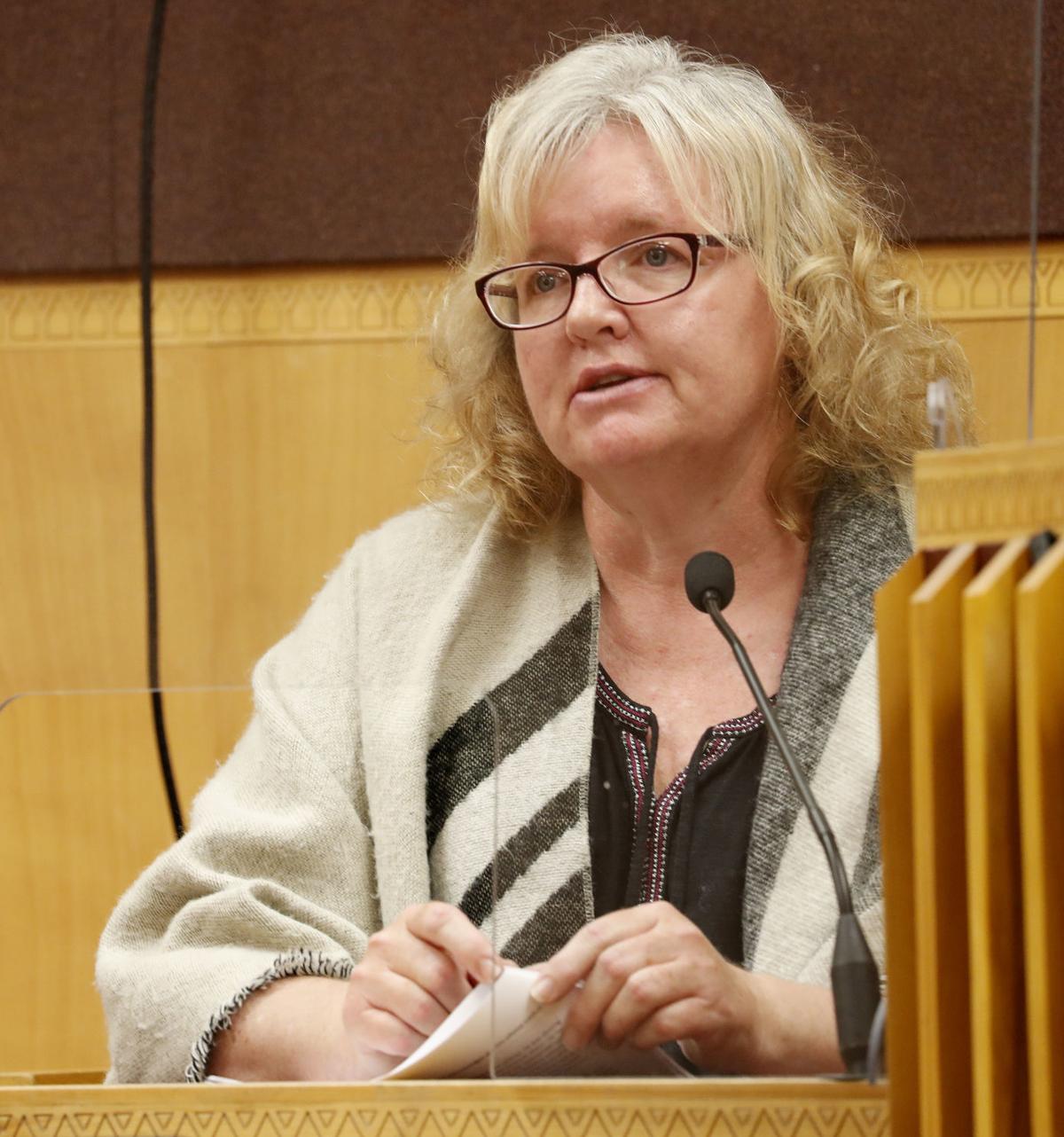 A Wyoming man was sentenced Friday to 25 years in prison after pleading guilty to multiple felonies committed in a single night in 2018 that included stealing five cars, threatening several people at gun point and leading law enforcement on a high-speed chase in and out of Billings.

District Judge Matthew Wald sentenced 42-year-old Ryan Glenn McElmury to 40 years in Montana State Prison, with 15 suspended after hearing testimony from detectives, McElmury’s parents and those who he robbed during his flight from law enforcement.

“Some of the problems that Mr. McElmury has are treatable, if he wants to deal with that…I do see an individual that is more than what he did that night,” Wald said before issuing the sentence.

McElmury’s breaking into a home, drawing shots from police into a house where a family slept and carjacking a district judicial candidate, all contributed to Wald’s decision.

“No one should have to go through what Mr. McElmury put them through that night,” he said.

McElmury was booked into Yellowstone County Detention Facility September 25, 2018, after an hour-long chase that involved the Billings Police Department, Yellowstone County deputies and the Montana Highway Patrol. It began with a robbery in which an armed McElmury broke into Performance Auto off Laurel Road, according to the testimony from Billings Police Det. John Tate.

After leaving on foot, he shot out a window of a nearby business and stole a Ford pickup that still had the keys inside the cab. With officers in pursuit, McElmury drove the Ford south. While driving on Simpson Street, he veered toward a police cruiser. The officer left the vehicle and fired several shots that hit the Ford on its driver’s side, Tate said.

McElmury then drove to New Day juvenile facility, where he smashed a window, left the building and then crashed the Ford into a tree. He broke into a nearby home and demanded the keys to a car at gunpoint from a resident. He took the stolen vehicle south on Shiloh Road, driving in the wrong lane, until he brought it to a stop in front of the third vehicle that he would steal, the second at gunpoint.

Yellowstone County District Judge Colette Davies, then campaigning for the position, was driving that third vehicle. Davies, who initially declined to testify in court on the grounds that it could compromise McElmury’s right to a fair trial, said his actions made it clear that he did not wish her any physical harm.

She said he threw her purse out the window before leaving the scene. He also discarded the money left in her daughter’s soccer bag, only taking a jersey and a bottle of water. Although the experience did not leave her with any lingering trauma, Davies said, she did agonize over the safety of her family.

Davies also said footage that she saw later in the investigation would show a different perspective of the carjacking. As she lay on ground after exiting her SUV, she decided to stand up before McElmury drove off. Several feet behind her, an officer had his weapon drawn and was prepared to fire.

“I don’t know if you know this, but I saved your life,” Davies told McElmury from the witness stand.

Det. Tate, during his testimony, said that all 18 of the city’s officers on patrol were alerted and in pursuit of McElmury by the time he drove Davies’ SUV onto Interstate 90. After rolling over spike strips laid onto the road at the North 27th Street exit, he pulled into a Town Pump and stole a fourth vehicle from a woman who was pumping gas.

While driving on U.S. 87 toward Roundup, he rolled the vehicle. McElmury then went onto a property, where he jumped into the fifth and final vehicle that he would steal that night. It was parked next to a home where a family of four slept. According to testimony from Det. Sgt. Robert Lester with the Yellowstone County Sheriff’s Office, three officers opened fire.

“We thought we were being attacked,” said Constance Heller, who was jolted awake by police fire that night, during her testimony.

Heller said after two calls to police dispatch, she and her husband could do little but console their three-year-old son. She said a van parked nearby blocked a bullet from hitting a glass sliding door. Had it not been there, the bullet would have struck right where she and her family were sleeping.

The Subaru that McElmury stole was integral to the family’s livelihood, Heller said. He drove that Subaru through a horse shed on the Hellers’ property and then into a duck pond that her husband was digging. With the airbags to the vehicle deployed, he surrendered to officers.

“This is the Grand Theft Auto version of Billings, Montana,” Lester said.

His past also includes one of commitment to his family, which his mother and father testified to in court. Randy McElmury said his oldest son played the role as the head of the family when his two other sons died unexpectedly. Beth McElmury said he was always an active member of the church, and he earned a degree in ministry while working full-time as a carpenter.

After suffering an injury on a job site, his mother said that he became dependent on opioids. Although he would stop using opioids, social worker Lisa Hjelmstad said he would rely heavily on alcohol and marijuana for several years.

Prior to hearing his sentence, McElmury said a debt to a person who threatened his family drove him to commit the initial burglary. That did not, however, excuse him for that or any of his actions that followed. Handcuffed, he turned to face each of the witnesses who testified on the stand Friday and apologized.

Judge Wald recommended counseling for chemical dependence and individual therapy be made available for McElmury. As part of his sentencing, McElmury will also pay nearly $35,500 in restitution and will have to register as a violent offender.

Montana has added 85 positive cases of COVID-19 Saturday after reporting record-breaking daily new cases since the start of July.

Ryan Glenn McElmury stands with his attorney Daniel Ball as he reads his statement during his sentencing in Yellowstone County District Court on Friday for 10 felony counts related to 2018 crime spree.

Billings Police Department detective John Tate points out areas of interest on a map during a sentencing hearing for Ryan Glenn McElmury in Yellowstone County District Court on Friday for 10 felony counts related to 2018 crime spree.

Constance Heller testifies during a sentencing hearing for Ryan Glenn McElmury in Yellowstone County District Court on Friday for 10 felony counts related to 2018 crime spree. Heller and her family were home when McElmury stole one of their vehicles and was arrested on their property north of Billings.