LAME DEER — Members of the Northern Cheyenne Nation who have created a citizen-led police force received some recognition Friday after months of operating under a tense relationship with the tribal government.

The Northern Cheyenne People’s Camp, a collection of members of the Northern Cheyenne Traditional Military Societies and their supporters, transitioned from an emergency response to the outbreak of COVID-19 justified by the tribe’s unwritten constitution to providing law enforcement. That transition, and the insistence of the camp’s volunteers that they maintain their mission, has come at the cost of support from the societies’ headsmen and the tribe’s president.

After more than a month of continuing to respond to emergency calls throughout the tribe's boundaries, in attire bearing the group's name, members of the People's Camp earned an audience with the members of Tribal Council, the chief of police and the president Friday.

As a result, one person from the camp may take part in daily briefings from the Northern Cheyenne Incident Command Centers, which will give the group an active role in combating the spread of COVID-19 within the nation.

In March, just days after Gov. Steve Bullock announced the first cases COVID-19 in Montana that would lead to executive orders effectively locking down the state, the tribes and nations in Indian Country launched their own preventative measures. President of the Northern Cheyenne Nation Rynalea Whiteman Pena declared a state of emergency covering the nation's nearly 440,000 acres and 5,200 residents.

The declaration restricted travel to COVID-19 “hot spots” in Montana, requested only absolutely necessary visits with Northern Cheyenne elders, and announced the nation’s Bureau of Indian Affairs officers were collaborating with government employees to limit the access of travelers into and out of its boundaries.

“It’s what we do. Since Oklahoma, since always,” said Littlebird, referring to the nearly 300 Cheyenne-Arapaho who fled the Indian Territory that they’d been relegated to in 1878 under the leadership of Chief Dull Knife and Little Wolf.

The Societies, along with the Council of 44, form the traditional government of the Cheyenne that can be traced back to the nation’s prophet, Sweet Medicine. Preserved through a precise oral history, Sweet Medicine provided the Cheyenne, the Tsétsêhéstâhese, with their ceremonies and way of life. Although the historical role of the Societies in relation to the Council has been fairly fluid, they are known for being the warriors of the Cheyenne and the police force within the tribe.

One preserved story is of a member of the Dog Soldier Society anchoring himself to the ground with strip of rawhide tied to a picket-pin, ready to defend a camp under attack or die trying.

The Northern Cheyenne’s reach peaked in the 1860s, when their bands with their Sioux allies had ranged from modern-day Colorado, to the Black Hills, to the Arkansas River. The military campaigns of the United States and the expansion westward in the last half of the century, combined with the obliteration of the buffalo herds on which the Indigenous people of the plains depended, concluded with the Northern Cheyenne earning their territory that runs from the border of the Crow Nation to the Tongue River.

The Constitution and Bylaws of the Northern Cheyenne Tribe, most recently amended in 1996, dictates the three branches of the tribal government, sets the government’s code of ethics and designates how elections will be held for presidential and council position. It does not mention either the chiefs or military societies.

After operating effectively underground for decades, the Societies became more visible during the 1990s. At the start of 1995, Society members mobilized when the Sacred Buffalo Hat Bundle, an ancient artifact of singular spiritual importance to the Cheyenne, went missing for two months. That same year, the Billings Gazette reported that Society members escorted two men to the nation’s boundaries. The two non-tribal members had been banned for 100 years after complaints of harassment and assault on the construction site of the Northern Cheyenne’s administrative building.

Nearly 25 years later, the chief headsmen of the Dog Soldiers, Elk Horn Scrapers, Crazy Dogs, Bowstrings, Swift Fox and Kit Fox Societies all signed an agreement to come to the aid of the Northern Cheyenne tribal government. Dated March 16, 2020, the agreement reads, “We have convened our Military societies and have decided to provide assistance and have mobilized our Military societies to assist the people in dealing with this public health threat to the Northern Cheyenne Reservation…”

Pena acknowledged the agreement with a signature.

Camps manned by members of the societies went up in Lame Deer, where traffic flows through the nation’s boundaries via U.S. Highway 212, Muddy, Busby and Ashland. Initially, members watched for out-of-state plates, stopping drivers and asking that they keep their time within the Northern Cheyenne’s boundaries to a minimum.

“We weren’t stopping traffic, we can’t stop traffic," Geofredo Littlebird said. "Closing off the reservation would violate state and federal law. What we are doing is encouraging those from out of state to move along without stopping at any of our businesses or buildings."

A state over, the response in Indian Country has resonated all the way to the White House.

The Cheyenne River Sioux Tribe, in South Dakota, filed a lawsuit against state and federal authorities who included President Donald Trump in June. The lawsuit argues Gov. Kristi Noem, the Bureau of Indian Affairs and the U.S. Department of the Interior all worked to undermine the tribe’s Health Safety Checkpoints along state and federal highways.

When Noem’s requests to remove the checkpoints turned to demands backed by the threat of a lawsuit on the state’s part, she appealed to the White House. Noem said checkpoints on both the Pine Ridge and Cheyenne River reservations had hindered transit of essential goods and personnel, the Rapid City Journal reported.

On the Pine Ridge Agency, the Rapid City Journal reported that Oglala Sioux tribal officers had assumed the role of BIA officers assigned to the area in March. With that responsibility came the $1.3 million in funding and equipment allotted to the tribe. The transfer occurred without any resistance on the part of the BIA.

BIA and the Northern Cheyenne

BIA-OJS officers assigned to the Northern Cheyenne Agency have the task of combating addiction on a dry reservation. Maintaining safety measures to keep contact to a minimum have led to arrests for only violent offenses, and access to only one jail has further strained law enforcement.

“To the best of our knowledge, (the BIA hasn’t) filled all the positions here since about 2013,” said Jason Small, a state senator who is Northern Cheyenne.

Small sent an email to the BIA with questions that include how the bureau is prepared to deal with overflow at the Hardin jail, why there is only one criminal investigator assigned to the Northern Cheyenne, and why tribes have needed to file Freedom of Information Act requests to access BIA statistics. He has not received a response, he told The Billings Gazette.

Small and his two children joined a march Wednesday in support of the Northern Cheyenne People’s Camp, which has been operating in Lame Deer for more than a month. Tensions with the tribal government and a withdrawal of support from Society headsmen led to every camp in the nation closing except for the one at the U.S. Highway 212 roundabout.

Since June, Society members acting independently from their leadership have continued to put in hours of volunteering. A phone number posted to a board near the camp has been used during that time to respond to calls that have included helping intoxicated people lying in the street, those aiding others injured in car wrecks and breaking up fights.

In many of those calls, according to Tribal Councilman Waylon Rogers, the Northern Cheyenne People’s Camp has been the first to respond, ahead of the BIA.

"We don’t want to bash the local police. We believe the people above them are more at fault, because they’re the ones controlling the local policies and procedures," Rogers said.

When the march entered the Little Wolf Tribal Building, the headquarters of the Northern Cheyenne government, council members and the chief of police ushered them out onto the lawn.

The camp has visible support in the form of a building at the roundabout allocated to them by the Tribal Cannabis Board, filled with food and water that has been donated. A GoFundMe for the camp has also netted nearly $1,600.

Levonna Littlebird-Graham, Geofredo’s daughter, became involved with the camp in April and has remained a vocal supporter, fundraiser and administrator for the camp’s online presence.

The camp has attracted kids as young as 10 years old, she said.

"You see these young men coming and watching the old ones, their elders," she said. "They’re learning what their ways are, what they’re supposed to be doing, their responsibilities."

One of those young men, Kymani Littlebird, 19 years old and a member of the Elk Horn Scrapers Society, died June 25, and the FBI is investigating his death. During the march, his name appeared on signs and across the Northern Cheyenne flags carried by those attending.

A month prior, he wrote on social media, “Damn to think of it … the end of the Cheyenne Tribe is because of its own Cheyenne people … I’m a proud Cheyenne but a disappointed one.”

During a meeting that included Rogers, Geofredo Littlebird and two other members of the Tribal Council, requests from the camp were aired. Those included reinstating a curfew, providing financial support and increasing awareness of several deaths among the Northern Cheyenne that have occurred since March.

Wednesday’s meeting led to a second meeting with Pena Friday. Rogers said that because the tribal government cannot be held liable for the actions of the volunteers, funding will have to wait.

“We’re basically operating on our own, separately from the headsmen or the chiefs," Rogers said.

He likened the group to a community watch that meets a need.

"I think the people’s camp would have come about, even without the Societies," he said.

Members of the Elk Horn Scrapers warrior society protest for funding to help them enforce curfews on the Northern Cheyenne Reservation. 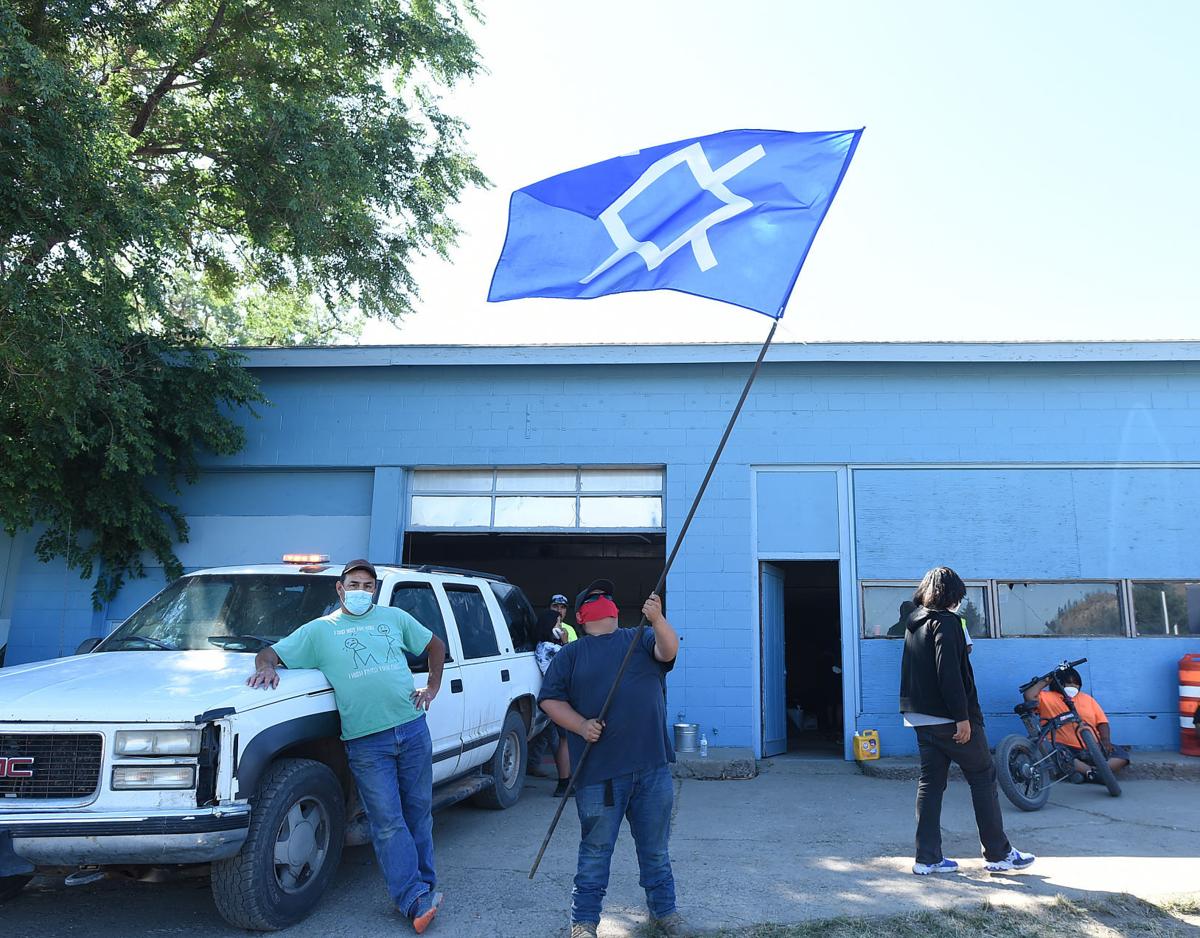 Members of the Elk Horn Scrapers warrior society protest for funding to help them enforce curfews on the Northern Cheyenne Reservation. 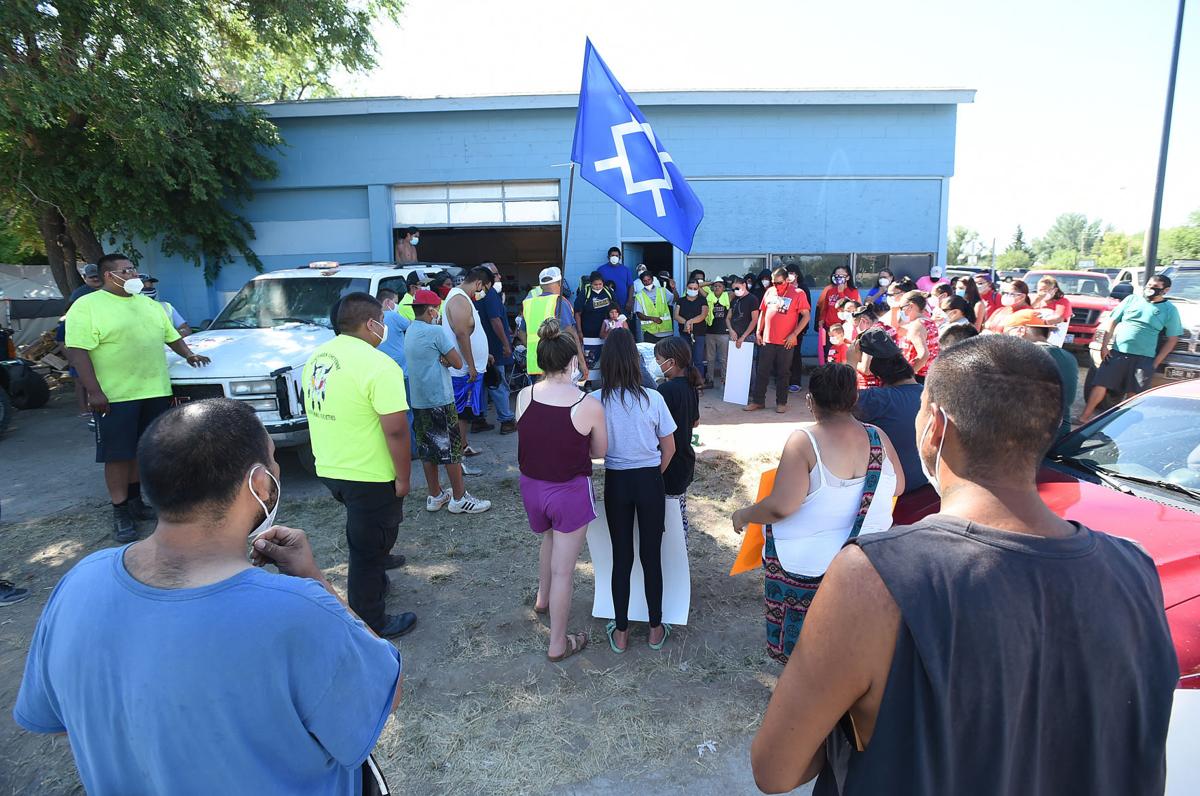 Members of the Elk Horn Scrapers warrior society pray before protesting Wednesday for funding to help them enforce curfews on the Northern Cheyenne Reservation. 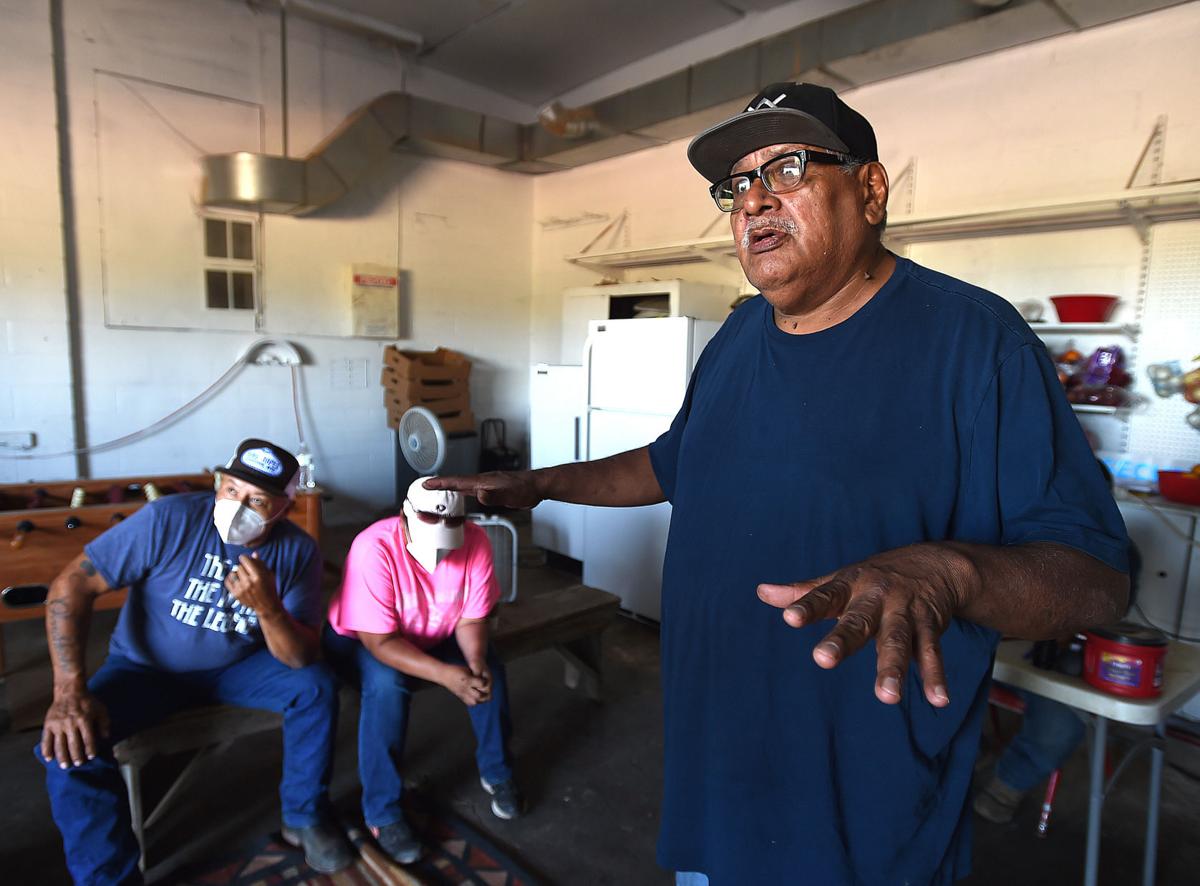 Geofredo Littlebird Sr. talks about his warrior group as members of the Elk Horn Scrapers warrior society protests for funding to help them enforce curfews on the Northern Cheyenne Reservation.