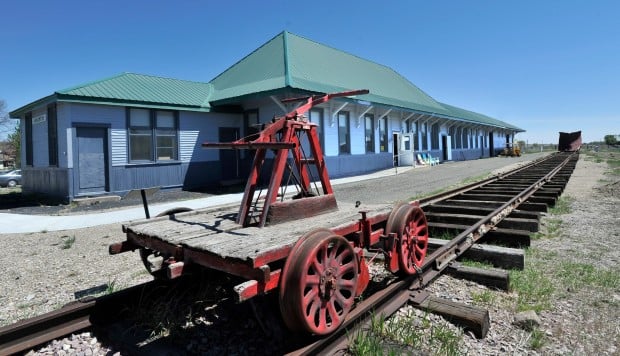 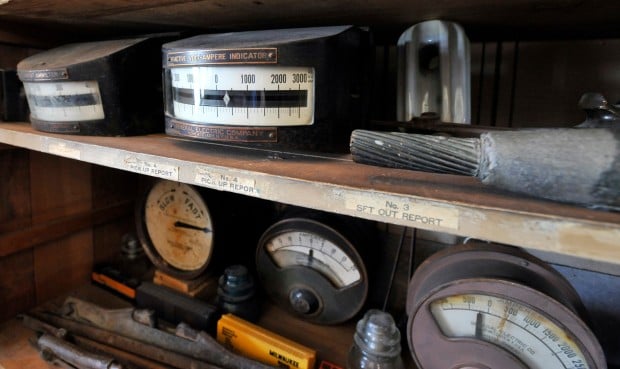 A variety of old railroad equipment is on display on shelves throughout the Harlowton Milwaukee Depot Museum. 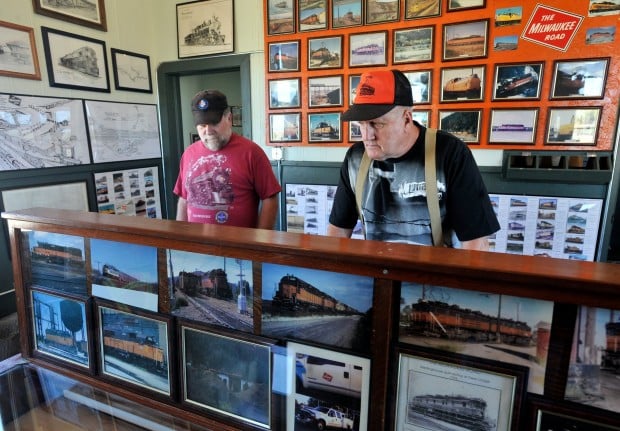 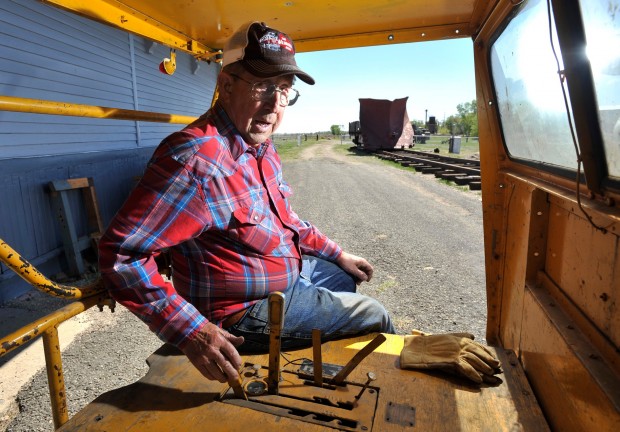 Harlowton Milwaukee Depot board member Irvin Naasz explains how to operate a railroad motor car, which was used to patrol track. 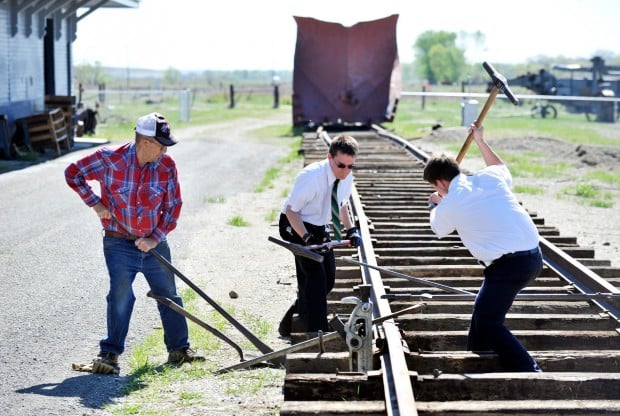 Irvin Naase from the Harlowton Milwaukee Depot works with LDS missionaries Michael Meraz, right, and Jacob Trout building a track in front of the railroad museum. 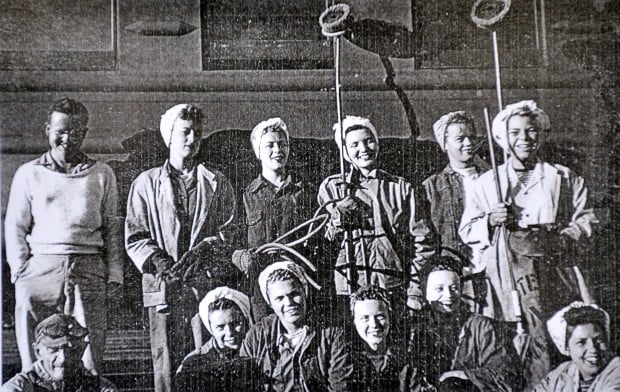 A 1940s photo in the Harlowton Milwaukee Depot Museum shows young women who "watered" the trains at the depot. The women would help porters clear the cars of trash, then wash the windows with brushes on long handles. 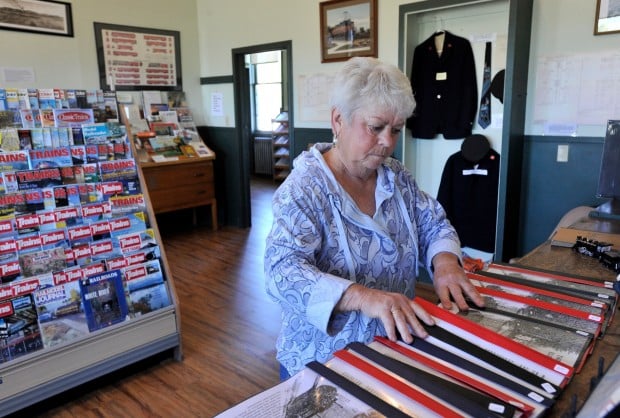 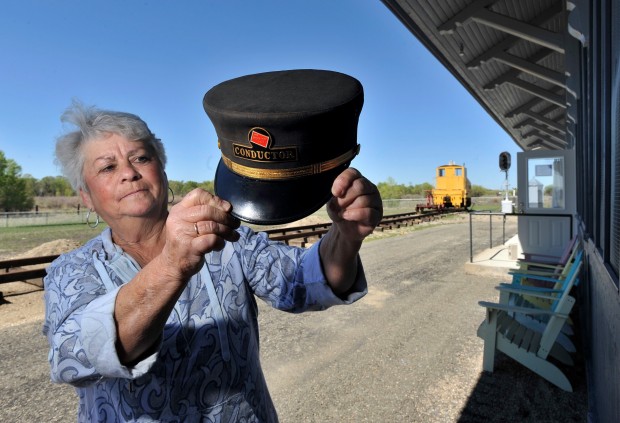 The Harlowton Milwaukee Depot Museum will open for the summer on Sunday. 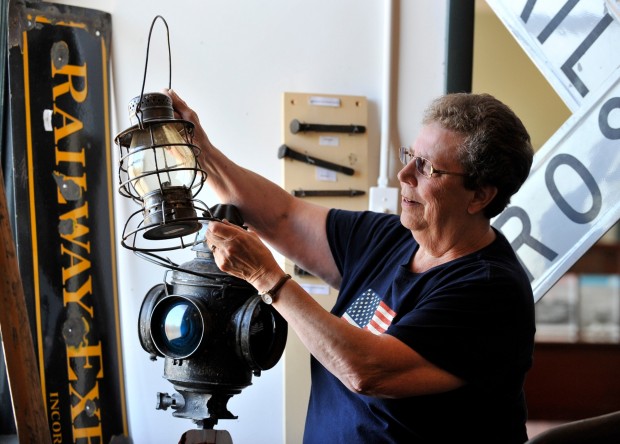 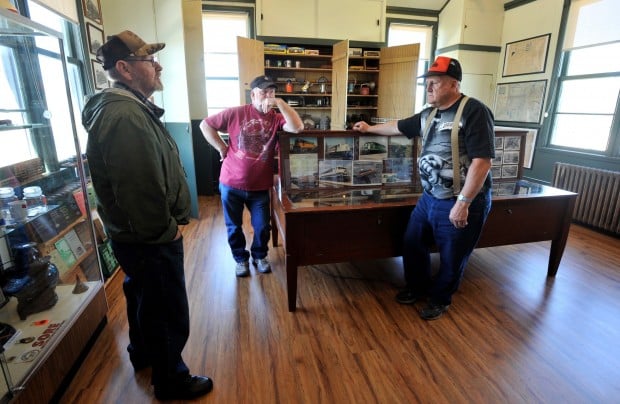 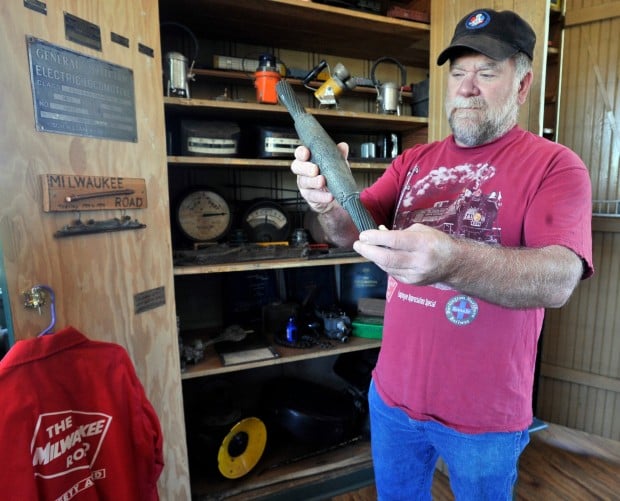 Harlowton Milwaukee Depot Museum President Charley Bennett shows a piece of a 4,400-volt feeder line that was used for the electric trains. 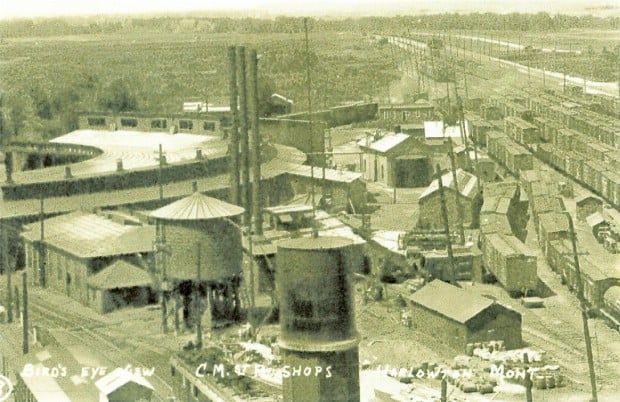 A picture postcard shows the switching yard in Harlowton in its heyday.

In 1980 — a few months after the last freight train left the Milwaukee Road switching yard at Harlowton — a contractor moved in with a crew to tear up the tracks.

“That was a sad day,” said Carol Naasz, 68, secretary of the City/County Preservation Committee that has set about creating a railroad museum in the vintage 1908 Milwaukee Depot and roundhouse.

Her railroad memory stretches back to summers spent on boxcars when her father worked on rail gangs. She and her husband, Irvin, worked on the rail gangs, too, taking their three children along on those boxcar summers. The Naaszes live in the railroad section house behind the depot and conduct private tours of the museum in the closed winter months if they spot someone interested in the old depot.

Losing the railroad that had built the town and filled Wheatland County with homesteaders was a blow that echoes 33 years later. Many of the board’s members worked for the Milwaukee or had husbands or family members employed by the railroad.

The sprawling 24-by-188-foot Milwaukee Depot Museum opened four years ago after decades-long renovation efforts by locals who were bound by generations of railroad tradition. It opens this year on Sunday with a barbecue from 11:30 a.m. to 2 p.m. (Hamburger plate, $5. Hot dog plate, $4.)

Each week from now until Labor Day, museum hours will be from noon to 4 p.m., Friday through Monday. The museum is staffed entirely by volunteers, who also do all the work preparing and maintaining rooms full of exhibits.

Board President Charley Bennett hopes to see railroad buffs from all over Montana this summer.

“It’s a railroad museum for the whole state, not just Harlowton,” he said.

In the week before the seasonal opening, Naasz’s husband, Irvin, pounded spikes into a stretch of tracks he’s rebuilding on the abandoned Milwaukee railbed in front of the museum. Already on the tracks are a fading red handcar and a motorized “shop goat” used for switching trains. Someday the board would like to see a locomotive and train cars parked on the tracks that Irvin is building.

Jacob Trout Las Vegas, who will soon complete his two-year mission, said they had been helping Irvin Naasz lay track three or four days during the last two weeks.

“We are loving every minute of it,” Trout said.

“I try to feed them good,” Naasz, 73, cracked at his two smiling helpers.

Naasz, a Terry native, followed the railroad to Harlowton as a young man. He was section foreman until the Milwaukee pulled out in 1980. He’d worked on the railroad for 15 years.

Attempts to preserve the depot began soon after the Milwaukee pulled out. The late Warren Elwood and his family led the charge to get it listed on the National Register of Historic Places. Family members pitched in to clean and restore the wooden floors. They also kept weeds down and mowed the grass, Irvin Naasz said.

The torch then passed to Marvin Berg and John Peccia, who put together a board and got things rolling again. But as in most volunteer projects, interest waxed and waned.

A few years ago, Gwen Tomlinson and Karen Bornong were walking near the depot when they saw someone painting the outside of the building.

“We said, ‘Let’s help him,’ and it just ballooned from there,” Tomlinson said. “Every year more people got involved. We started to get grants and more members.”

“We all got along and we loved it,” Carol Naasz said.

Irvin said Carol got to work recruiting new members and taking care of the books.

A lot of community sweat and donations went into the project. Tom Keating, a former railroader and son of a Milwaukee signalman, put in the underground sprinkler system. Harlowton quilter Diana Day designed a “Hobo Quilt” with squares featuring the shorthand used by displaced wanderers during the days of the Great Depression. (A cat symbolized a kind-hearted woman.)

Carol had duplicates made of train dispatcher sheets from the 'teens though '40s and hung them on the depot walls. Dispatchers were under terrible strain, trying to keep trains from running into each other.

“They were high-stress jobs, like air-traffic controllers today,” she said. “It was so stressful they bit their fingernails until they bled. We think the red smears on the sheet may be blood.”

Kenny Mager, a former railroad employee, had his private railroad collection stored in his garage. When he saw that the committee was increasing security at the depot, he brought in his collection for display. The collection includes a replica of a Milwaukee engine, caboose and cattle car.

“I was bored one winter so I did this,” he said, gesturing toward the replica behind a glass case in what used to be the yard clerk’s office.

Other members of his family, including brother Larry Mager and brother-in-law Charley Bennett — former railroaders all — serve on the museum’s board.

The depot has patrons of every age. A Head Start class created a cardboard replica of the Milwaukee roundhouse and yard. High school students in Lyn Graves' art class produced six large, colorful paintings based on photographs of the railyard in its prime.

Others have donated paintings, drawings, old kerosene signal lights and other artifacts and memorabilia — not just from Harlowton, but from other railroad stops in Montana.

“We have a lot of things coming in to us now,” Tomlinson said. “We hope that every time someone comes to the museum, they will see something new.”

Montana Gov. Steve Bullock said Thursday that the state health department is pursuing legal action against several businesses in northwestern Montana after they failed to follow restrictions meant to prevent the spread of the novel coronavirus.

A variety of old railroad equipment is on display on shelves throughout the Harlowton Milwaukee Depot Museum.

Harlowton Milwaukee Depot board member Irvin Naasz explains how to operate a railroad motor car, which was used to patrol track.

Irvin Naase from the Harlowton Milwaukee Depot works with LDS missionaries Michael Meraz, right, and Jacob Trout building a track in front of the railroad museum.

A 1940s photo in the Harlowton Milwaukee Depot Museum shows young women who "watered" the trains at the depot. The women would help porters clear the cars of trash, then wash the windows with brushes on long handles.

The Harlowton Milwaukee Depot Museum will open for the summer on Sunday.

Harlowton Milwaukee Depot Museum President Charley Bennett shows a piece of a 4,400-volt feeder line that was used for the electric trains.

A picture postcard shows the switching yard in Harlowton in its heyday.