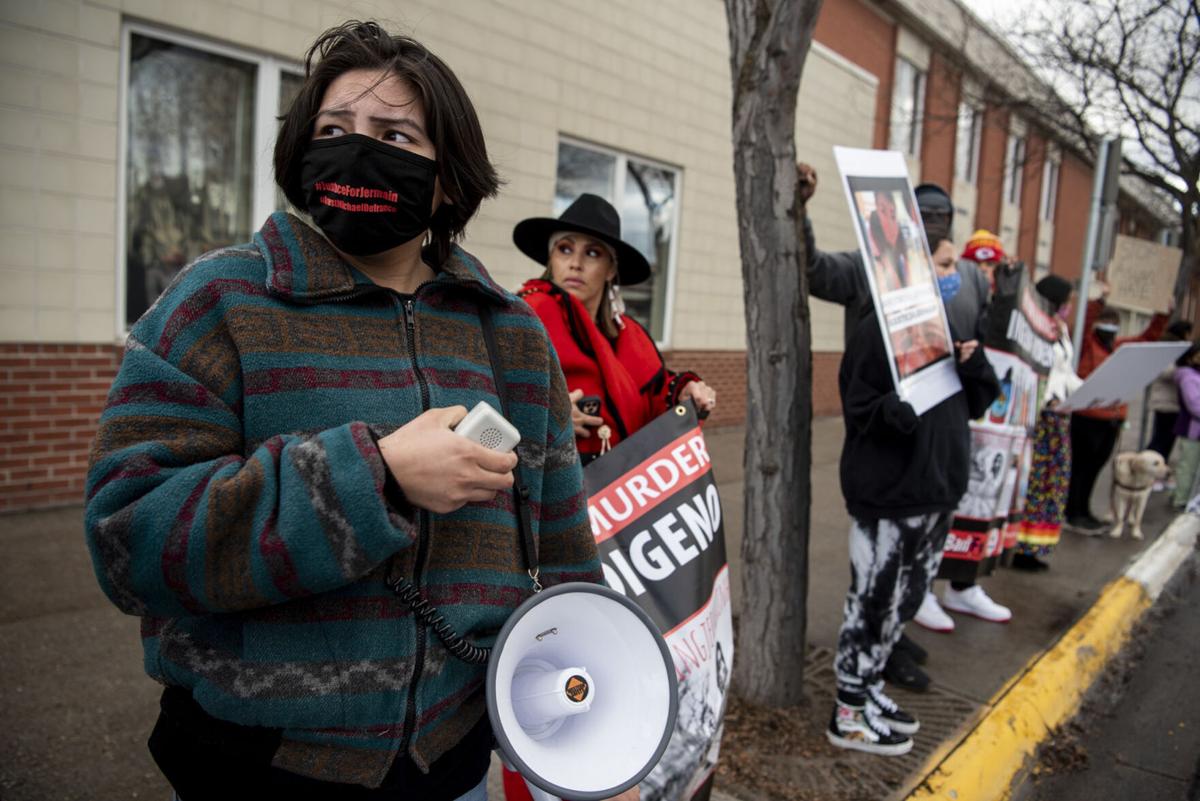 Chayla Jewel R. leads a chant during a rally Friday evening for Jermain Charlo outside the Missoula Police Department. 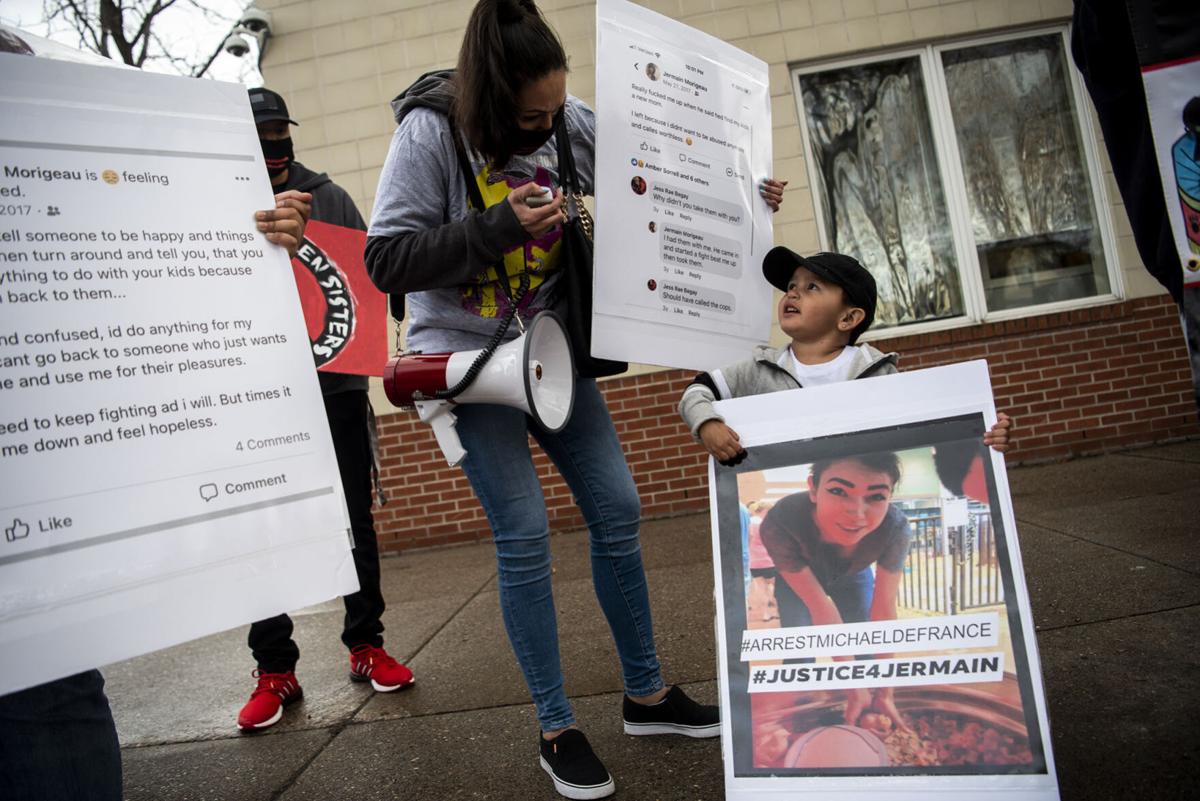 Danielle Matt Garcia, left, helps her grandson Messiah Matt, 2½, lead a chant for Jermain Charlo. Garcia said Messiah never got to meet his auntie Jermain before she disappeared in 2018. 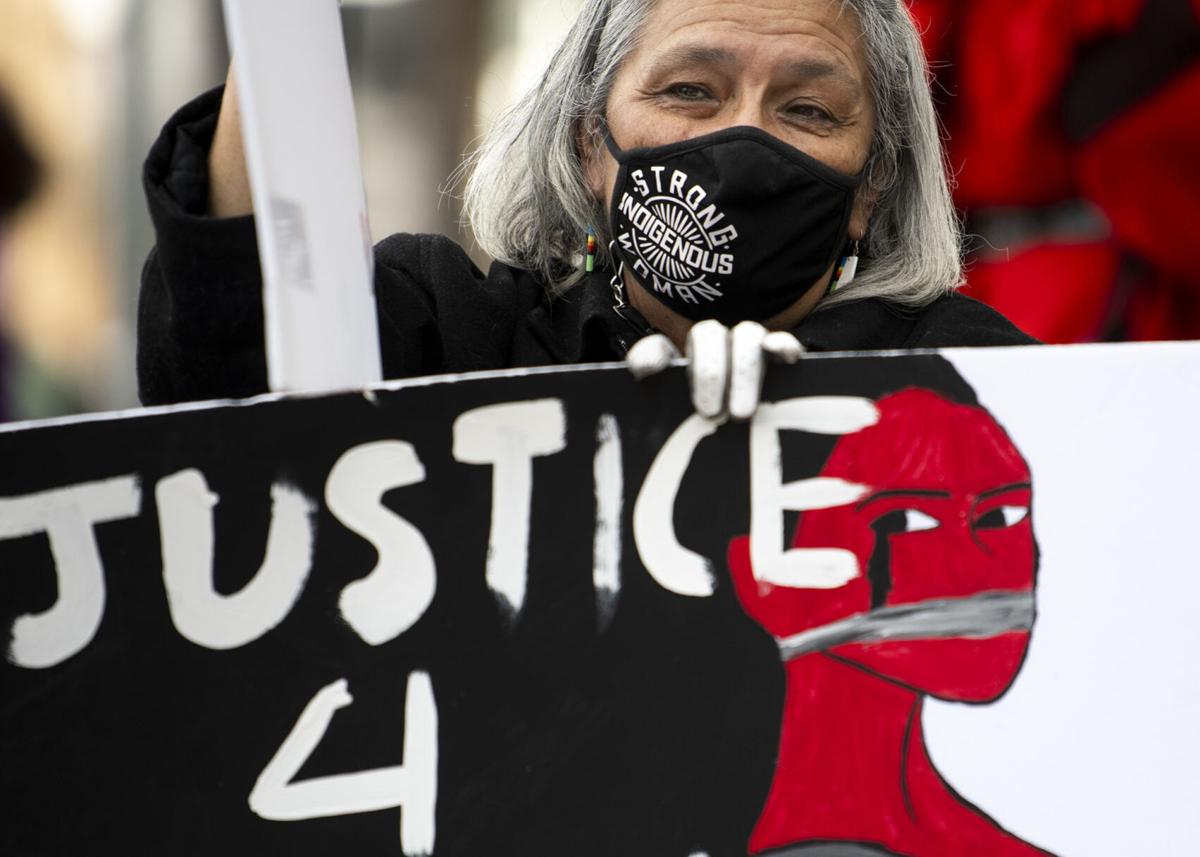 Nadeen DuMontier, a lifelong neighbor of Jermain Charlo and Jermain's grandmother, participates in the rally on Friday evening. "I'm really thankful I'm here," DuMontier said. "I want them to do justice for Jermain." 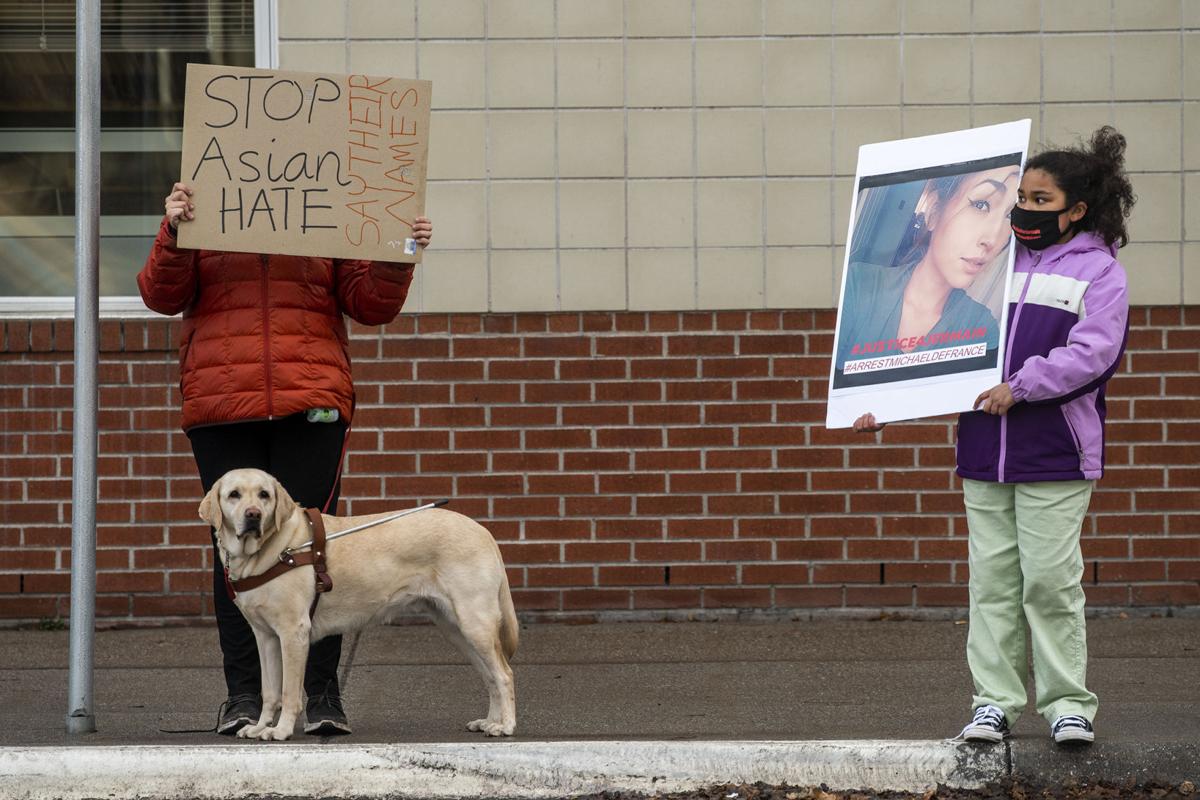 A rally for Jermain Charlo was held outside the Missoula Police Department on West Spruce Street and Ryman Street on Friday evening.

At a demonstration Friday demanding justice for Jermain Charlo, one protester held a sign plastered with a search warrant for Charlo's phone location the night she went missing.

About 20 of Charlo’s friends and family gathered outside the Missoula Police Department asking police name the ex-boyfriend, Michael Defrance, as a suspect in her missing person’s case.

“Pure frustration is why our family is out here today,” said Danielle Matt Garcia, Charlo’s aunt.

Charlo went missing on June 16, 2018. A Missoula Housing Authority security camera captured her about 1 a.m. walking through a downtown alley behind the Badlander bar toward Higgins Avenue.

That was the last known sighting of Charlo. However, according to a search warrant filed in Missoula County District Court, Charlo’s cellphone was “at or near Michael Defrance’s residence” between 2 a.m. and 10 a.m. on the morning she disappeared.

Missoula Police received that information on June 27, 2018, according to the search warrant. Garcia doesn’t understand why Defrance hasn’t been arrested, she said.

Standing on the corner of West Spruce Street and Ryman Street, the demonstrators chanted, “Who wants justice? We want justice,” and waved signs with Charlo’s picture.

Chayla Russell, one of Charlo’s cousins, helped organize the demonstration. Russell previously organized an event to raise awareness about Charlo’s case in June 2020 on the second anniversary of her disappearance. Russell is the daughter of Garcia.

When people were slow to find out why the group was there, the family was ready to answer their questions.

“Her case has basically become a cold case,” Russell told one passing man.

The man told her the police don’t care about Native American lives.

“I kind of already know that, you know,” Russell said after the man walked away.

Garcia wanted to make sure the protest was outside the department, rather than a march, Russell said. She wants answers from police. It took 11 days for them to begin searching for Charlo, she said.

“Now two and a half years later, how much evidence was lost?” Garcia said. “If they would have started looking for her right away.”

Another of Charlo’s aunts, Valenda Morigeau, said she has no problem with Missoula Police Det. Guy Baker, the detective on Charlo's case, but her feelings about how the police are handling the case are “complicated.”

Morigeau filed the first missing person’s report for Charlo in Missoula County, she said. She wishes police would be more straightforward so the family could help more with the search.

“You always wonder if you’re looking in the right place,” Morigeau said.

It varies day by day whether Morigeau thinks her niece will be found alive, she said. If she can’t be found alive, Morigeau at least wants whoever is responsible for her death to be put in jail. She also hopes to find Charlo’s body so it can be buried in the family plot.

David Velarde Jr. said he is Charlo’s grandfather and helped take care of her when she about 12 or 13 years old. He called Charlo the day after she went missing to tell her to get up and go to work. He didn’t get a response.

“I thought she’d be calling saying ‘I’m at work’ all gruff and stuff,” Velarde said. “And there’s no body. It’s like she got picked up by an alien space ship and disappeared.”

The Missoula Police Department did not immediately respond to a request for comment on the demonstration.

The Stillwater County Coroner’s Office has identified the two men killed Wednesday in an accident at the Stillwater Mine near Nye.

"I think we're ready to move on to the next chapter," longtime weed opponent Steve Zabawa said Friday.

Montana has added 332 new cases of COVID-19 over the past week, and confirmed 10 more deaths.

Montana Fish, Wildlife & Parks is unsure how effective the new laws will be when it comes to driving down wolf populations.

The body of a 17-year-old boy was recovered from the Missouri River between Helena and Great Falls early Tuesday.

A woman says she got into a heated argument with an older boyfriend she lived with in Dillon before she strangled him to death with a rope in January 2020.

Firefighters from multiple agencies were dispatched Sunday to a wildfire in the Beartooth Mountains near Robertson Draw in southern Carbon County.

Tracy Stone-Manning is facing GOP pressure to withdraw her BLM nomination from President Joe Biden over her ties to environmental activists convicted of spiking trees to sabotage a national forest timber sale more than 30 years ago.

Chayla Jewel R. leads a chant during a rally Friday evening for Jermain Charlo outside the Missoula Police Department.

Danielle Matt Garcia, left, helps her grandson Messiah Matt, 2½, lead a chant for Jermain Charlo. Garcia said Messiah never got to meet his auntie Jermain before she disappeared in 2018.

Nadeen DuMontier, a lifelong neighbor of Jermain Charlo and Jermain's grandmother, participates in the rally on Friday evening. "I'm really thankful I'm here," DuMontier said. "I want them to do justice for Jermain."

A rally for Jermain Charlo was held outside the Missoula Police Department on West Spruce Street and Ryman Street on Friday evening.