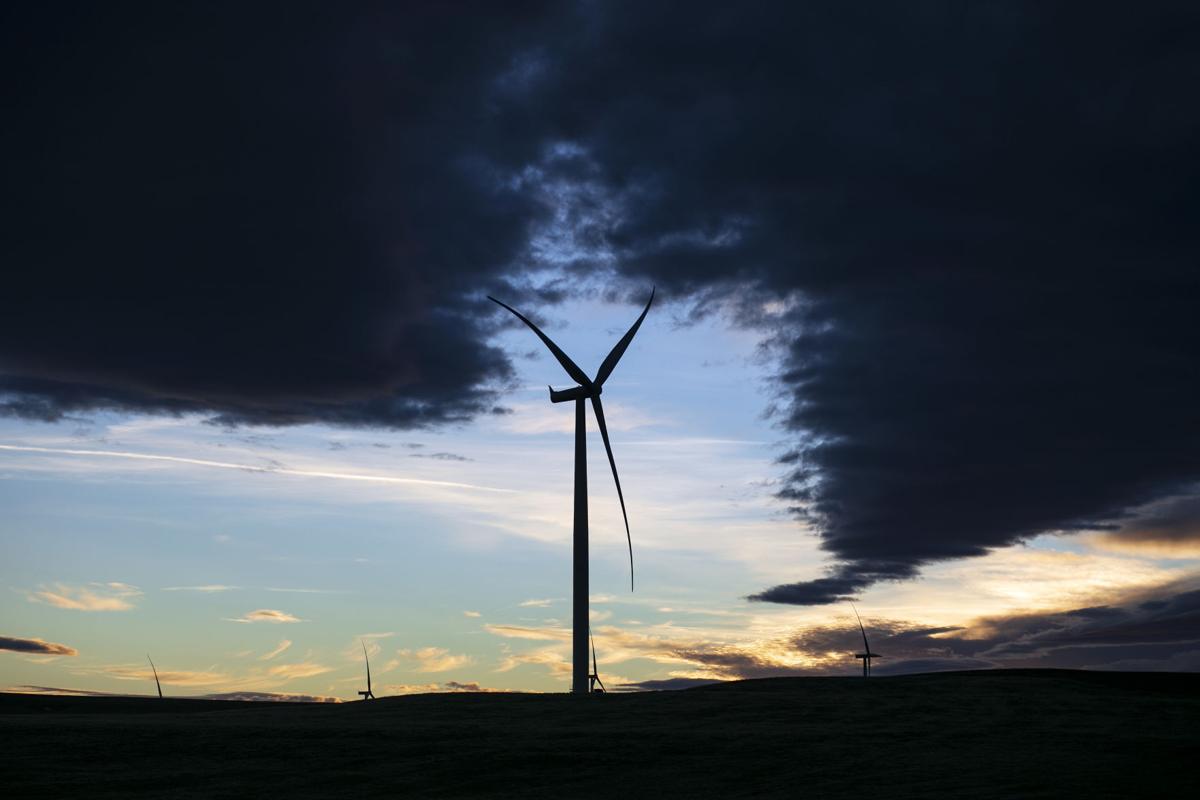 Wind turbines at Stillwater Wind facility turn in the evening light on Dec. 9 near Reed Point. 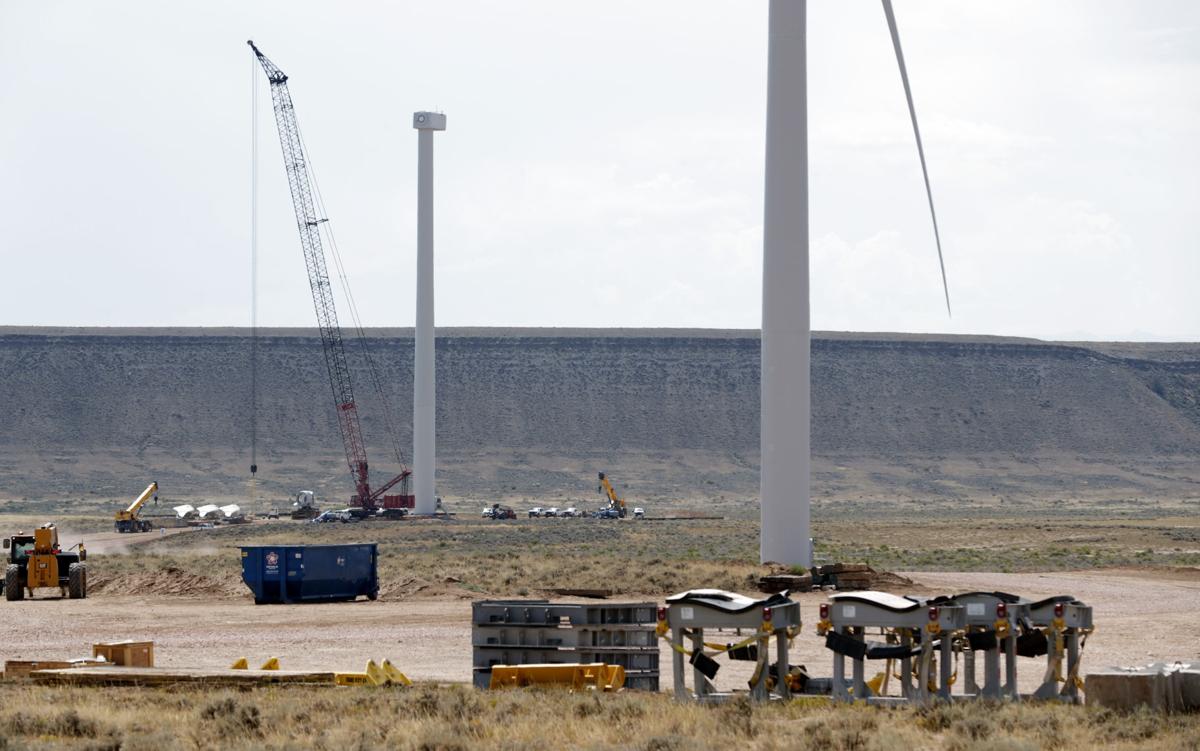 Construction has begun on wind turbines for the Pryor Mountain Wind Project south of Bridger on Wednesday. The project will have 114 turbines producing 240 megawatts of power, and is scheduled to be completed by December.

A large wind and solar farm east of Broadview is under new ownership and slated for operation in two years.

Houston-based Broad Reach Power announced its purchase of the Buffalo Trail Wind and Solar farm near Broadview, 30 miles northwest of Billings, on Thursday. At 250 megawatts, the wind farm would be the largest of its kind in Montana, as would the 250-megawatt capacity solar farm.

Broad Reach did not disclose the project’s value, but similar sized wind farms in the region have cost $400 million to $500 million without an accompanying solar farm. A wind farm of Buffalo Trail’s scale can power about 80,000 homes.

Buffalo Trail was originally proposed as a wind-only project with 125 wind turbines, according to transmission records. Developer Invenergy requested in 2015 to connect the Northwestern Energy’s 230-kilovolt line at Broadview Substation. The Chicago-based company hoped to have wind turbines spinning by October 2018, but the project didn’t take off. Invenergy wasn’t a stranger to Montana. The company developed the 135-megawatt Judith Gap wind farm, which came online in 2006 near Harlowton.

Broad Reach is already working on several solar projects in the region, both near Broadview and northwest of Billings in the Alkali Creek area. Strategically, buying Buffalo Trail made sense, not only for its generation, but also because of its location beside Broadview Substation, one of the largest energy onramps to customers in the Pacific Northwest.

“I think it’s the largest substation in Montana,” said Mark Klein, Broad Reach managing partner and chief operating officer. “There’s two different voltages, 230 (kilovolts), which is basically the backbone transmission system for NorthWestern Energy. And then the 500 kV, which is basically the main trunk line coming out of Colstrip for exporting to Washington and Oregon. The significance is market access, particularly out of state for export.”

The new project would be the first pairing of wind and solar in Montana. Broad Reach is also a big developer of wind and solar backed by battery storage, which allows energy to flow onto the grid during times of peak demand when energy prices are more favorable and also when the sun isn’t shining and the wind doesn’t blow.

In June, the company announced it was building 15 stand-alone battery storage projects in Texas, with an eye on charging the batteries when market power was priced low and selling the energy when prices were higher.

In September 2019, Broad Reach partnered with ENCAP, a private equity firm steeped in oil and gas investments, to develop 2 gigawatts of energy storage projects, either standalone, or paired with wind and solar farms.

The Broad Reach Wind and Solar developer is Daniel Zolnikov, a former state legislator from Billings and past chairman of the House Federal Relations, Energy and Telecommunications Committee. Zolnikov joined Broad Reach in the second half of this year.

“I am looking forward to begin developing these projects as we continue investing in Montana,” said Zolnikov in a purchase announcement. “Once completed, these projects will provide much needed reliability to the region’s grid while also contributing valuable local construction jobs and significant tax dollars to counties such as Yellowstone, Stillwater and Golden Valley.”

Broadview is one of three large Montana projects rolled out in last few years with out-of-state customers in mind. PacifiCorp, the largest utility in the region, is completing the 240 megawatt Pryor Mountain Wind Farm near Bridger this month. That $400 million project taps the transmission line servicing Yellowtail Dam.

A third project, Clearwater Wind, is being developed by Florida-based Nextera, between Forsyth and Miles City. At full build out the wind farm is expected to be 750 megawatts.

Billings Gazette agriculture and politics reporter Tom Lutey shares some of his most memorable stories from 2020.

It's been a newsy year, but drawing from the more than 200 articles I've written in the past 12 months, these five touch on larger themes.

The first, "Coronavirus threatens Montana's already struggling cattle market," was an early warning sign about the unexpected ways the pandemic was about to clobber our economy. Just a few weeks later, there were 45,000 fewer jobs in Montana.

The second article, "Unemployment escalation has been extraordinary in Montana," was the only article I've seen that didn't just report the number of unemployment claims processed, but touched on the failure of an overloaded system.

It's easy to get caught up in the data government offers, in this case the 76,042 unemployment claims processed in the first 21 days of the pandemic in Montana. There had been less than 14,000 in February. Equally important is the data you have to ask for. During that same three weeks, there were 1.042 million calls to Montana's unemployment phone line, most of which went unanswered.

The third article, "Postal delays spark concerns about service, mail ballot elections," was an enterprise Sunday piece sparked by increasing delays in the mail. My own pharmacy shipments were taking 12 days to arrive. My wife's mail was being dropped off in Edgar, a little town about 40 miles from where we live. Speaking with postal workers, I learned they were being ordered to leave mail behind, that the dysfunction we experienced resulted from a directive from a new postmaster.

A week after that first article, we were learning about mail sorting machines being dismantled and the removal of letter drop boxes, all of which could make voting by mail more difficult.

The fourth article, "Bullying, spying and harassment revealed in Montana PSC documents," stems from some watchdog reporting earlier in the year that resulted in a request for information that was clearly public. Rather than produce the information, the Montana Public Service Commission sued us. After several months, the court ruled in our favor. It was one of four taxpayer-funded lawsuits initiated by the PSC that it lost in 2020.

The fifth article, "Colstrip sale falls apart amid strong opposition" was a late-breaking story that required some careful explanation. The sale of a 25% share of Colstrip Unit 4 had dominated Montana's energy politics for nearly two years. The sale had big implications for Montana customers of NorthWestern Energy, which wanted to buy a larger share of Colstrip. Likewise, Puget Sound Energy customers had a lot on the line, as did the workers at the power plant and servicing mine. Very few people spoke in favor of the transaction before it collapsed.

Montana ranchers say they are losing money as the nation’s monopoly meatpackers turn a profit, a problem that has only worsened with the COVID-19 pandemic.

Unemployment escalation has been extraordinary in Montana

There were more than 31,000 Montanans with unemployment payment requests on Sunday, April 12, the highest single-day number since the start of the COVID-19 pandemic.

Montana Public Service Commission documents showing a pattern of bullying, harassment, and spying at the agency have been released by a district court judge, months after commissioners sued the news media rather than release data.

Report: Woman was driving drunk in crash that killed son

The Montana Highway Patrol is investigating whether a woman was driving drunk when her young son died in a car crash in February.

An arrest warrant was issued Friday for a woman who prosecutors believe was drunk driving when she got into a car crash that killed her 10-year-old son last month.

Man in custody after standoff with deputies near Lincoln

Montana added 165 new cases of COVID-19 on Tuesday, and 15 more of its residents died due to complications from the virus.

Montana reported 75 COVID-19 cases and no new deaths in an update Sunday morning to the state case mapping and information website.

Teachers and staff in K-12 schools and childcare programs in Montana are beginning to receive doses of the COVID-19 vaccine following a federal push by the Biden Administration that aims to get all teachers vaccinated by the end of March.

The Yellowstone County Coroner's Office has identified the three Billings teenagers that were killed in a rollover car crash last Friday west of the city.

The Flathead County Sheriff’s Office Monday released the name of the man shot and killed by a Kalispell police officer.

A western Montana woman was sentenced Tuesday to 100 years in prison without the possibility of parole after being convicted of killing her ex-boyfriend, with whom she had an ongoing custody dispute over their daughter.

The continuing challenges of a COVID-19 pandemic leave lots of unknowns to ponder as spring and the short tourist season approach.

Wind turbines at Stillwater Wind facility turn in the evening light on Dec. 9 near Reed Point. 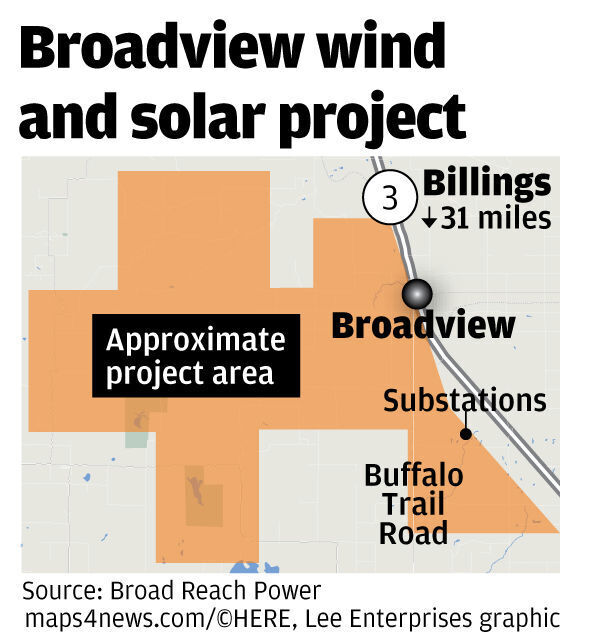 A map showing the approximate project area for the Buffalo Trail Wind and Solar project near Broadview. 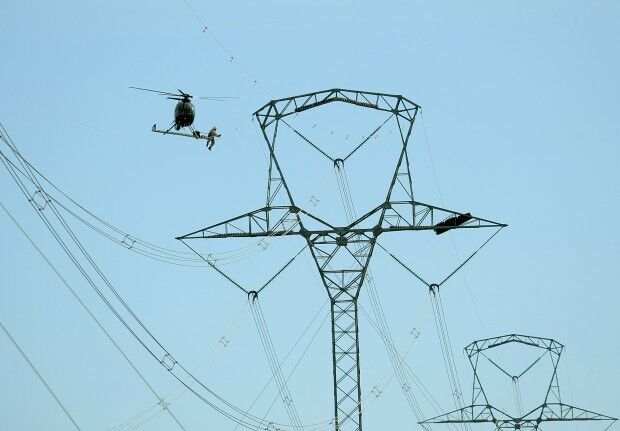 A lineman and pilot from Haverfield Aviation installs bird diverters on the static lines of NorthWestern Energy’s power lines near Broadview in 2012. The work is being done to reduce the number of birds killed in collisions with the wires.

Construction has begun on wind turbines for the Pryor Mountain Wind Project south of Bridger on Wednesday. The project will have 114 turbines producing 240 megawatts of power, and is scheduled to be completed by December.