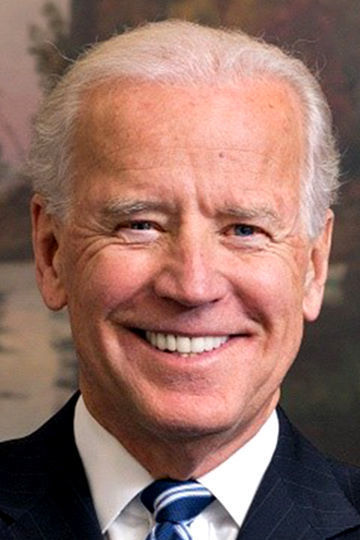 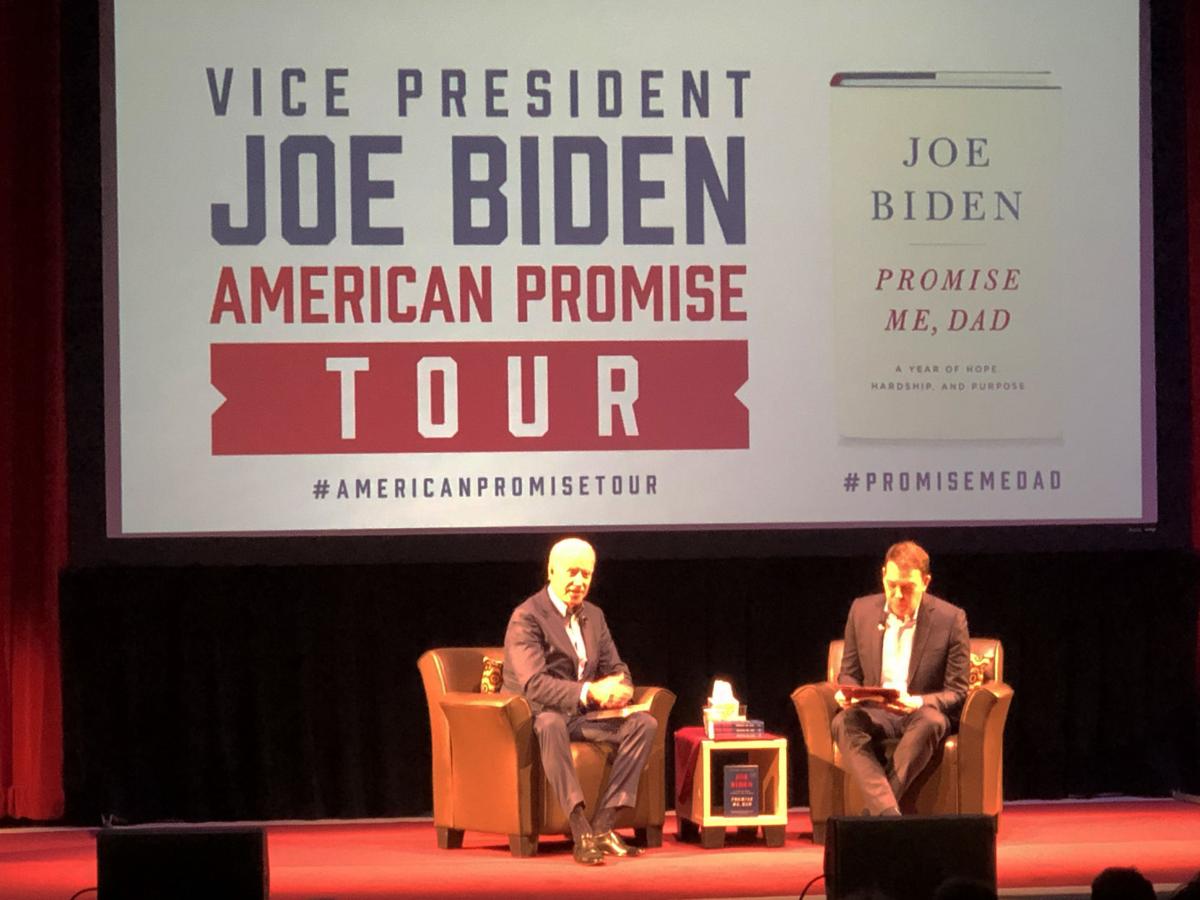 Joe Biden, left, speaks to a crowd at the University of Montana on Monday night.

Joe Biden was introduced as a two-time presidential candidate and — slyly — “perhaps a future candidate,” in front of a crowd at the University of Montana on Monday night.

The former U.S. Vice President said he would announce within six weeks to two months whether he was running.

Biden told the nearly full house at the George and Jane Dennison Theatre on the University of Montana campus that America "can't have four more years'' of the current administration.

"I am a gaffe machine,'' Biden said. "But my God what a wonderful thing compared to a guy who can't tell the truth.

"Guys, it's time to remember who the hell we are — there's nothing we can't do ... my Lord this malaise that's out there and this president ... we have to choose truth over lies, science over fiction," Biden added.

Monday’s appearance was part of Biden’s “American Promise Tour” to promote his 2017 memoir, “Promise Me, Dad: A Year of Hope, Hardship and Purpose.” The tour has hopscotched around the country for the past year, including cities like New York, Portland and Chicago. From Missoula, Biden travels to Dallas on Tuesday and Burlington, Vermont, on Sunday.

The book takes its title from the words — “Promise me, Dad … you’re going to be all right” — of his elder son, Beau, who died of brain cancer in 2015, and deals in part with Joe Biden’s decision not to seek the presidential nomination the following year.

Before Biden spoke, Seth Bodnar came onstage and disavowed his role, at least for this one evening, as UM’s president. Instead, he said, he was speaking as a former soldier, one who’d served two tours of duty in Iraq, the second with Biden’s son Beau, a member of the Delaware National Guard.

Beau Biden gave him advice that set him on his future path, said Bodnar, a West Point graduate who at the time was trying to decide whether to stay in the military. “Be in public service,” Beau Biden told him. “… You will be richer for it … rich in the most important ways.”

The elder Biden in turn dispensed his own father’s advice to Monday night’s audience:

“Family is the beginning, the middle and the end.''

“When you get knocked down, just get up.”

And, “a job is about being able to look your kid in the eye and say, ‘Honey, it’s going to be OK” — that is, the family will be secure.

Biden’s personal tragedies are well-known: the death of his first wife and baby daughter in a car crash shortly after winning his first Senate race; and then Beau’s death just three years ago, and he discussed those things Monday.

But he leavened his talk with humor, recalling being tapped to run for a New Castle County Council seat in Delaware when conventional wisdom said a Democrat had no chance; then, after winning, one night opening a motel room door to a peremptory knock to find the state’s Democratic Party leaders waiting to anoint him for an equally unlikely Senate run.

Biden, wrapped in a towel, shaving cream framing his face, was too startled to do anything but agree.

In the midst of that tale, the man famous for his rambling asides interrupted himself, wondering if he was going on too long. Should he cut his anecdotes short?

The crowd's answer: a resounding no.

He also challenged the audience to ask themselves what kind of nation the U.S. is becoming and said he fears, like columnist David Brooks, that our moral fabric is shredding.

"One thing we desperately need is hope,'' Biden said.

This story has been updated to reflect that Biden called himself a "gaffe" machine.

Billings man charged with stabbing his mother to death

A Billings’ man has been charged Monday with deliberate homicide after his mother was found stabbed to death in her home in the Heights early Saturday morning.

The districts that are part of this proposal are all 200% or above population objectives and largely concentrated on private land.

COVID-19 related deaths continue to reach record levels as 130 more Montanans died in the last seven days. Montana has averaged 15 deaths per day over the last week with Nov. 30 bringing 33 deaths in a day.

Watch Now: Should my kid get the COVID vaccine?

Joe Biden, left, speaks to a crowd at the University of Montana on Monday night.