Nearly 19,000 children traveling alone were stopped at the Mexican border in March, smashing previous highs set during periods of heavy child migration in 2014 and 2019.

Is it a crisis? Spin and semantics aside, migration to the U.S. from Mexico is increasing in a major way for the third time in seven years under Republican and Democratic presidents — and for similar reasons.

HOW HAS MIGRATION CHANGED SINCE JOE BIDEN BECAME PRESIDENT?

Border encounters — a widely used but imperfect gauge that tells how many times U.S. authorities came across migrants — rose sharply during Donald Trump's final months as president, from an unusually low 17,106 last April to 74,108 in December. They soared during President Joe Biden's first months in office. Encounters totaled more than 172,000 in March, up from about 100,000 the previous month and the highest since March 2001.

That's only part of the picture, though. Who's crossing is just as important a gauge as how many are making the attempt, if not even more.

Mexican adults fueled last year's rise, a throwback to one of the largest immigration increases in U.S. history, spanning from 1965 through the Great Recession of 2008. In March 2020, the Trump administration introduced pandemic-related powers to immediately expel people from the United States without an opportunity to seek asylum. Facing no consequences, Mexican men kept trying until they made it.

About 28% of people expelled in March had been ousted before, according to Biden administration officials, compared with a 7% pre-pandemic recidivism rate in the 12-month period that ended in September 2019. The recidivism rate was 48% among Mexican adults during one two-week stretch last year in San Diego.

Families and children traveling alone, who have more legal protections and require greater care, became a bigger part of the mix after Biden took office. They accounted for more than 40% of all encounters in March, up from 13% three months earlier. 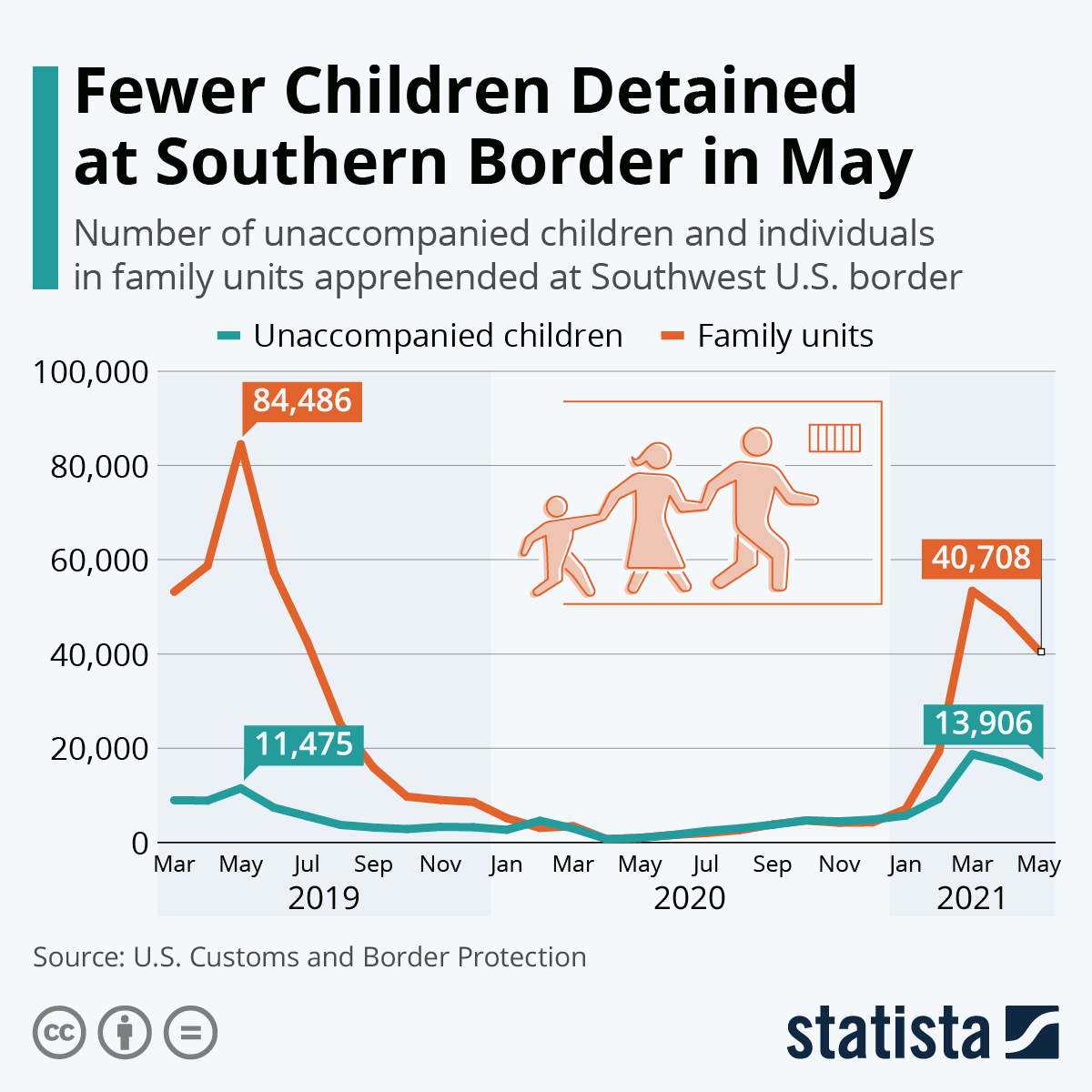 You will find more infographics at Statista

WHY ARE FAMILIES AND CHILDREN COMING NOW?

It's complicated. Central Americans have been fleeing poverty and violence at least since civil wars of the 1980s, and Hurricane Eta in November and hunger have given new impetus for some in Guatemala and Honduras.

Migrants also are guided by changes in U.S. policy — both real and rumored. Biden exempted unaccompanied children from pandemic-related expulsions, allowing them to remain in the United States to pursue asylum.

About one of every three encounters with families in March resulted in expulsion, bringing families to the border with hopes they can remain in the U.S. Mexican authorities have resisted taking back Central American families with children 6 and under from Texas' Rio Grande Valley, the busiest corridor for illegal crossings. That's prompted U.S. authorities to start daily flights to El Paso, Texas, and San Diego to expel families from there.

While he has kept Trump's pandemic-related expulsion powers in place, Biden quickly jettisoned other policies as cruel and inhumane, making good on campaign promises.

Trump, responding to a massive increase in Central American families and children that peaked in May 2019, expanded his "Remain in Mexico" policy to force asylum-seekers to wait in Mexico for hearings in U.S. immigration court. It was unquestionably effective at deterring asylum — less than 1% have won their cases, according to Syracuse University's Transactional Records Access Clearinghouse — but asylum-seekers were exposed to violence in Mexico, as documented by advocacy group Human Rights First and others. Attorneys were extremely difficult to find in Mexico.

Other Trump-era policies included fast-track asylum proceedings inside U.S. Customs and Border Protection holding facilities, where access to attorneys was next to impossible. Agreements were struck with Guatemala, Honduras and El Salvador for the U.S. to send asylum-seekers to the Central American countries with an opportunity to seek protection there instead.

WHAT IS THE BIDEN ADMINISTRATION DOING?

Short-term border holding facilities are overtaxed: More than 4,000 parents and children — mostly unaccompanied kids — have been crammed into a CBP tent complex designed for 250 in Donna, Texas. More than 600 children were packed into a room built for 32 last week, separated by plastic walls.

To address severe overcrowding, the U.S. Department of Health and Human Services, which cares for children longer term, has reached a slew of agreements to move unaccompanied children into large venues while officials make arrangement to release them to "sponsors" in the United States, usually family or close relatives. New sites include convention centers in Dallas and San Diego, a stadium in San Antonio and Fort Bliss army base in El Paso, Texas. Long Beach, California, agreed Tuesday to house up to 1,000 in its convention center.

Biden aides are speeding the release of children to parents, relatives and others in the United States, partly by covering airfare in some instances.

People are traditionally released in the U.S. with notices to appear in immigration court. But in the Rio Grande Valley, the Border Patrol stopped issuing court notices to many migrant families in March to save time, instead ordering they report to U.S. Immigration and Customs Enforcement office within 60 days.

The Biden administration is seeking $4 billion to address "root causes" of migration from Central America. It is stepping up efforts to have children apply for asylum from their homes in Central America instead of making the dangerous journey to the U.S. border.

Photos: Scenes from the US-Mexico border during height of migrant crossings

The owner of a California bar was arrested on suspicion of selling made-to-order fake COVID-19 vaccination cards to several undercover state agents.

Gunman kills 6, then self, at Colorado birthday party

A man opened fire at a birthday party in Colorado, killing six people before killing himself.

At least 15 people were killed and 30 more injured in mass shootings since Friday night.

The birds have trashed the deck. Plants have been knocked over, railings scratched and there's poop everywhere.

The mystery behind a loose tiger in Texas grows. A man is arrested. The tiger roams free.

A Texas man free on bond from a murder charge was returned to custody Monday after neighbors found a pet tiger wandering around a Houston neighborhood.

Prosecutors say the man obtained $5 million in federal coronavirus-relief loans for phony businesses and then used the money for lavish vacations and to buy a Ferrari, Bentley and Lamborghini.

Schools fear dropouts will surge as result of pandemic; parents rush to get shots for kids

Soaring numbers of U.S. students are failing classes or chronically absent. Experts fear the worst. Get the latest as the U.S. grapples with consequences of the COVID-19 pandemic.

A federal grand jury has indicted the four former Minneapolis police officers involved in George Floyd's arrest and death, accusing them of violating his constitutional rights. 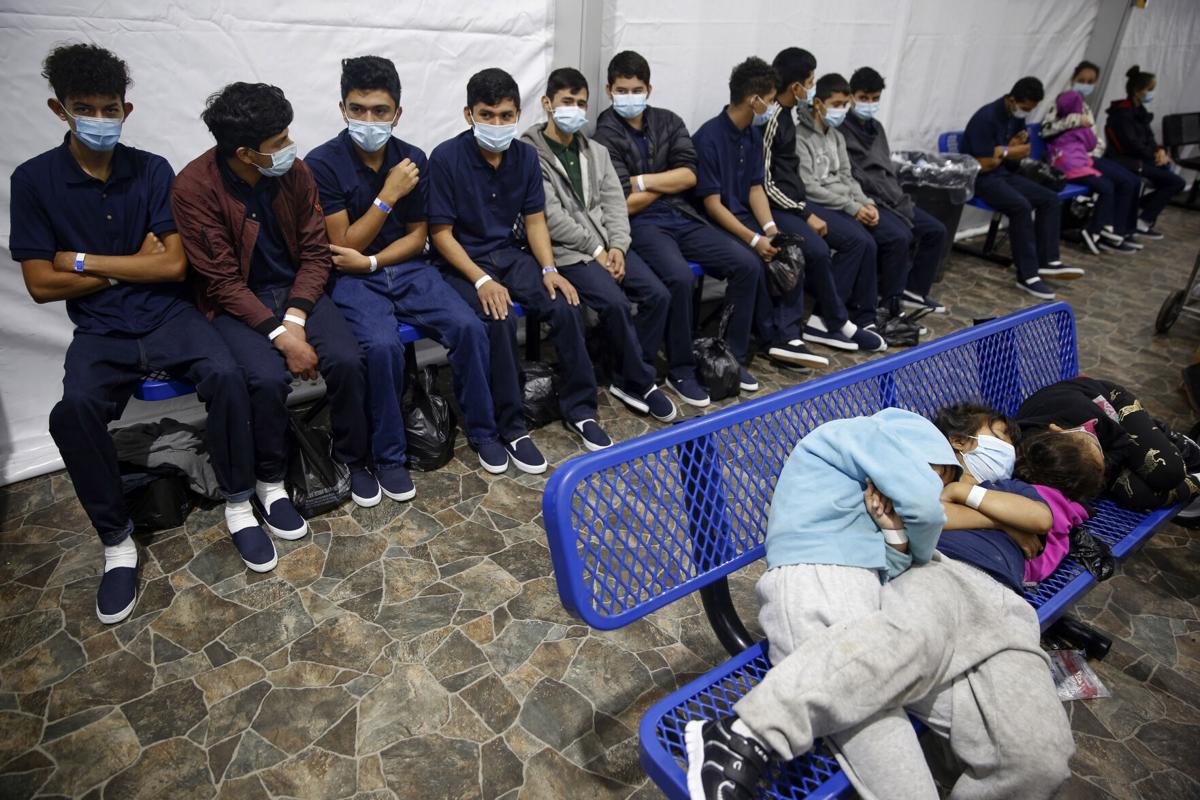 FILE - In this March 30, 2021, file photo, young unaccompanied migrants wait for their turn at the secondary processing station inside the U.S. Customs and Border Protection facility, the main detention center for unaccompanied children in the Rio Grande Valley, in Donna, Texas. U.S. authorities say they picked up nearly 19,000 children traveling alone across the Mexican border in March. It's the largest monthly number ever recorded and a major test for President Joe Biden as he reverses many of his predecessor's hardline immigration tactics. (AP Photo/Dario Lopez-Mills, Pool, File) 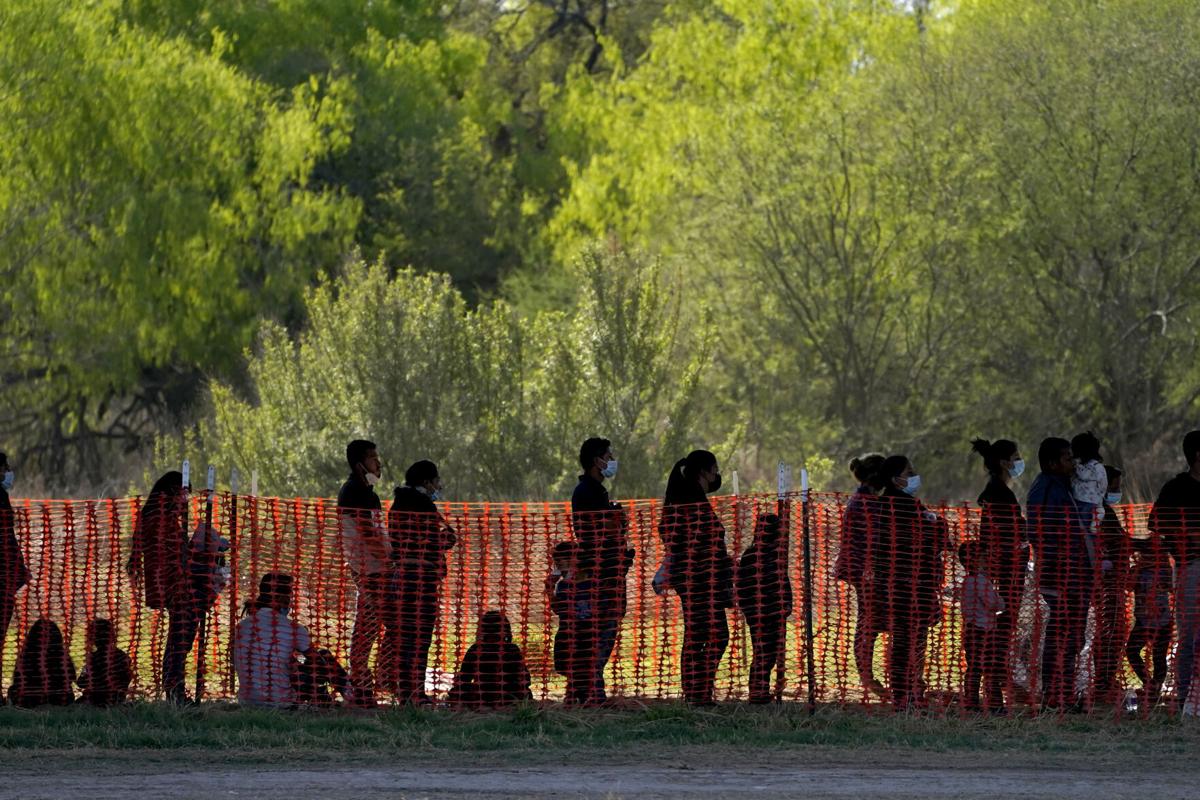 FILE - In this March 19, 2021, file photo, migrants are seen in custody at a U.S. Customs and Border Protection processing area under the Anzalduas International Bridge, in Mission, Texas. U.S. authorities say they picked up nearly 19,000 children traveling alone across the Mexican border in March. It's the largest monthly number ever recorded and a major test for President Joe Biden as he reverses many of his predecessor's hardline immigration tactics. (AP Photo/Julio Cortez, File)