Every election cycle, I’m accustomed to seeing campaign signs. But this past summer, I was struck by the sheer number of them in Scottsdale, Arizona, near where I live. I counted 18 on just one corner of a major intersection.

As a linguist who studies political advertising, I’ve read the research arguing that signs don’t make much of a difference.

The deluge of signs during primary season reflected the state’s heavily contested races for a U.S. Senate seat, U.S. House seats and statewide offices for governor, secretary of state and attorney general.

Why are there so many signs when studies point to their minimal influence on election outcomes? Where might their value lie? 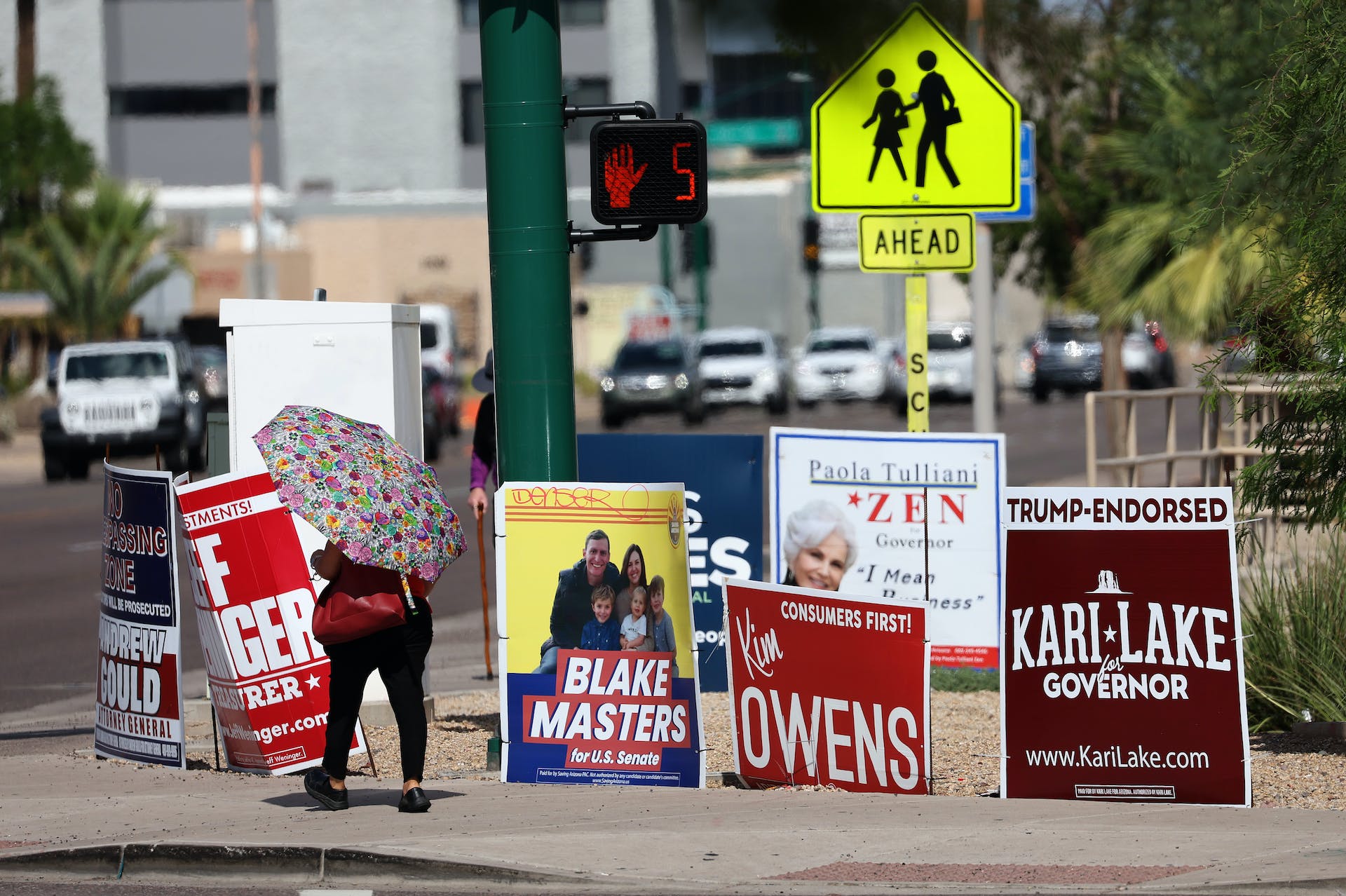 Arizona's cities and towns have been flooded with signage during the heavily contested 2022 elections. Justin Sullivan/Getty Images

Claiming street corners and front yards for political advertising is not new.

Some type of street signage in U.S. elections has been around for at least 200 years.

The 1828 presidential race between John Quincy Adams and Andrew Jackson was the first to employ political paraphernalia like buttons, medallions, mugs and posters that bore the candidates’ images and slogans. The candidates relied on their supporters to flaunt this swag to help get out the vote.

In his 2020 book “Political Sign,” Tobias Carroll outlines the gradual development of the political sign to the styles that are familiar today.

Political posters and signs in the mid-1800s were more verbose and could even contain song lyrics. Then, beginning in the 1920s, ad agencies professionalized the style of these signs, leading to formats that are now commonplace: 18-by-24-inch placards in yards prominently featuring the candidate’s name and office, along with larger ones on public thoroughfares.

Such signage is not a distinctly American phenomenon. Canada and the U.S. share a reliance on corrugated plastic signs in yards and thoroughfares. Signs on poles and posters on walls are popular in the U.K., where political ads on TV are banned. Candidates will advertise in most any country with open elections, and their government will likely make rules on the size of signs. 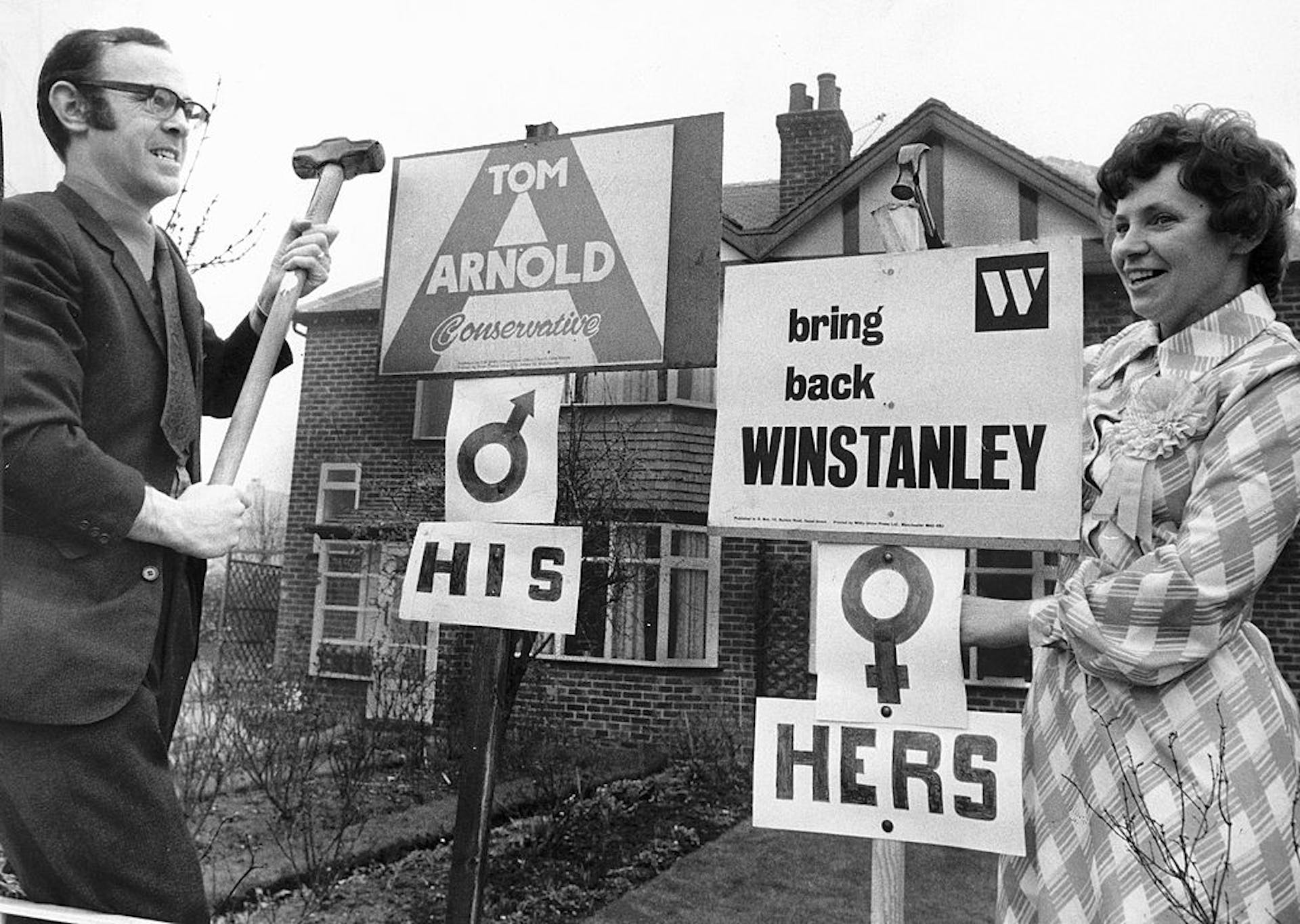 Political signs affixed to poles are popular in the U.K. Manchester Daily Express/SSPL via Getty Images

As popular as signs seem to be, political operatives often dismiss them as a superfluous hassle.

Campaign managers I’ve spoken to tell me that yard signs matter mostly in hyperlocal elections; while they’re relatively cheap, they still eat into tight budgets. Others complain of signs getting damaged and stolen. They’re awkward to transport, and fines loom if they’re wrongly placed or missing required information. All governmental jurisdictions have regulations about when and where they can be placed on public right of ways.

And, as many politicos point out, if you’re going up against a popular candidate, no matter how many signs you put up, it won’t win you the election – signs, after all, don’t vote. One campaign manager did assure me, however, that all candidates need professionally produced signs in order to be considered serious and viable.

Political scientists have long worked to learn what makes advertising strategies effective. Candidates and their campaign managers are eager to learn more about this impact, too.

But studies about campaign signage are complicated by the fact that no two campaigns or election cycles are alike. As a social science researcher, I know that controlling for the effect of signs is tricky when numerous factors influence an election’s outcome, sometimes even after the polls close.

A yard sign is certainly an indicator of an individual voter’s enthusiasm, but determining if it will get their neighbors to vote – and vote for the same candidate – is another issue.

Some studies only look at typical yard signs, and while less standardized signs on public property share some similarities, the two are distinct.

Campaign signs at corners of major thoroughfares and mass transit stops, I believe, can also be an indication of enthusiasm. Candidates’ campaigns may pay the sign company to place them, but others rely heavily on volunteers to help. Few people, however, see those volunteers, and most likely don’t know how those signs came to be there.

In 2013, political scientists Cindy Kam and Elizabeth Zechmeister found that name recognition alone can affect perceptions of a candidate’s viability. Extensive signage may help with that and boost potential viability. But factors such as being an incumbent can change that – and, perhaps, obviate the need for signs as a way to boost name recognition. 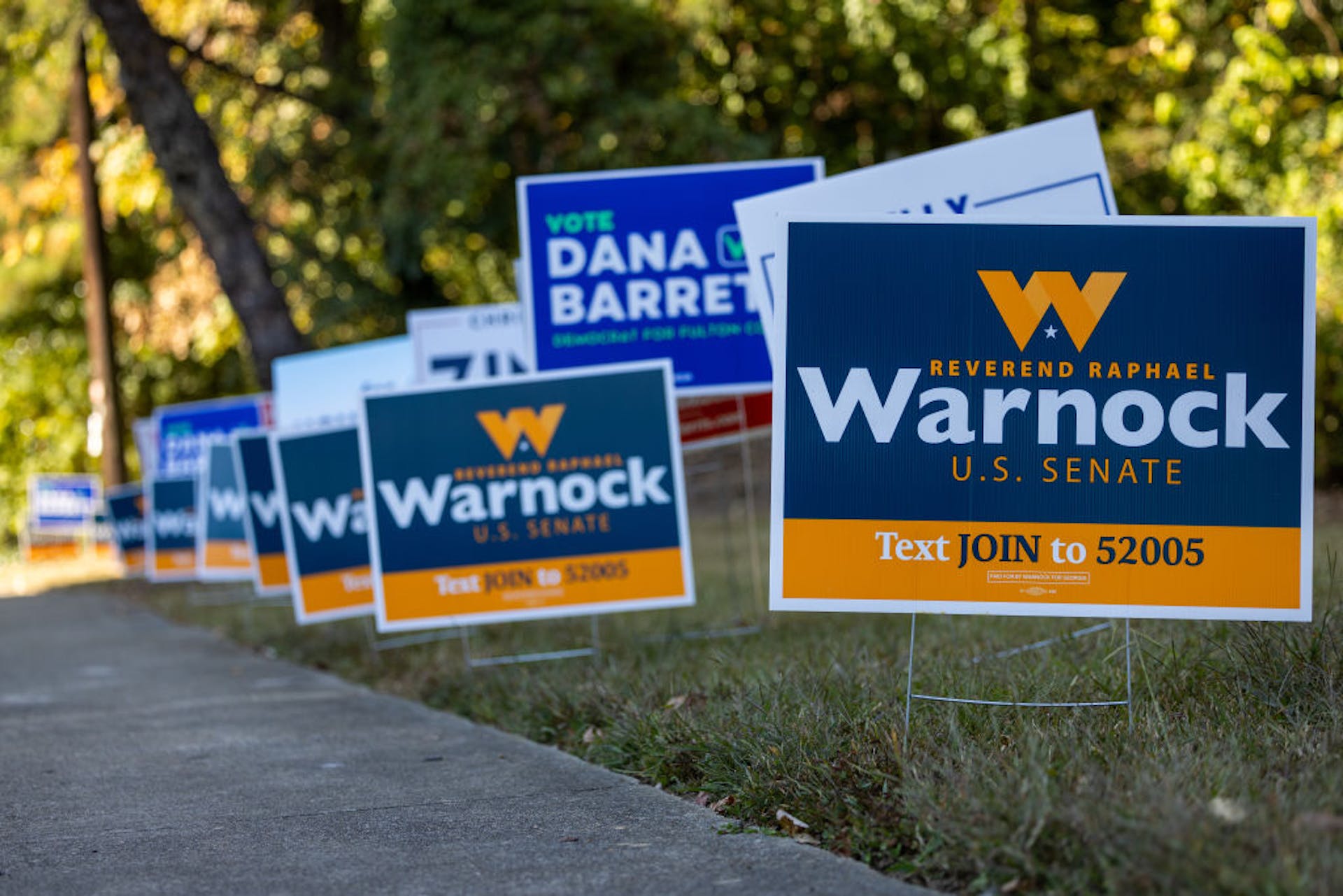 A 2016 study led by political scientist Donald Green notes that lawn signs can have a small effect of “just over one percentage point” and, like other low-tech strategies such as mailers, can play a role when only a few points separate candidates. Even high-budget TV ads are largely found to make little difference outside of very close races. In purple Arizona, where the count tally often is tight, it’s possible to argue that signs – and whatever else the budget will allow – could make a difference.

A simple and easy way to engage

Campaign signs, like TV ads, are forms of advertising that reach people who may not be plugged into politics.

Yard signs are seen by the neighborhood and may make a difference with residents. Larger numbers of potential voters see signs at major intersections in a metropolitan area like Phoenix and surrounding towns. For example, on a single midweek day, March 3, 2022, a one-mile stretch of road running north and south and sporting several signs on corners saw 32,280 vehicles, according to the city of Tempe, Arizona, where I live.

In hotly contested primary races, numerous candidates are likely new to voters. Public thoroughfare signs mean voters needing more information have a real chance of getting it during a routine car ride.

And a candidate needing more name recognition has a real chance of getting that from regular commuters through some savvy sign placement. Signs including endorsements or campaign pledges can transmit additional information over the course of a few seconds at a stoplight.

Signs convey a real diversity of candidates and their beliefs. Even poorly funded candidates can express themselves through signs.

Despite reports of democratic backsliding in the U.S., the intersection in Scottsdale with 18 signs tells me that the democratic process is, in some ways, still thriving.

Karen Adams is affiliated with the Democratic Party through donations. I do not volunteer for the party or a particular candidate.